June is a premier month for trout fishing in the Golden State, simply because fishing opportunity is at its highest for both boaters and bank anglers.
In June California trouters have a plethora of different trout waters to choose from and due to stable weather and rising water temperatures the trout action at most waters ranges from good to great!
Being a full-time fishing writer, in any give spring and summer I’ll visit several dozen different trout waters and they are all special in their own way. If you’re looking to explore and bag some trout this June here’s a trio of destinations that will treat you right! 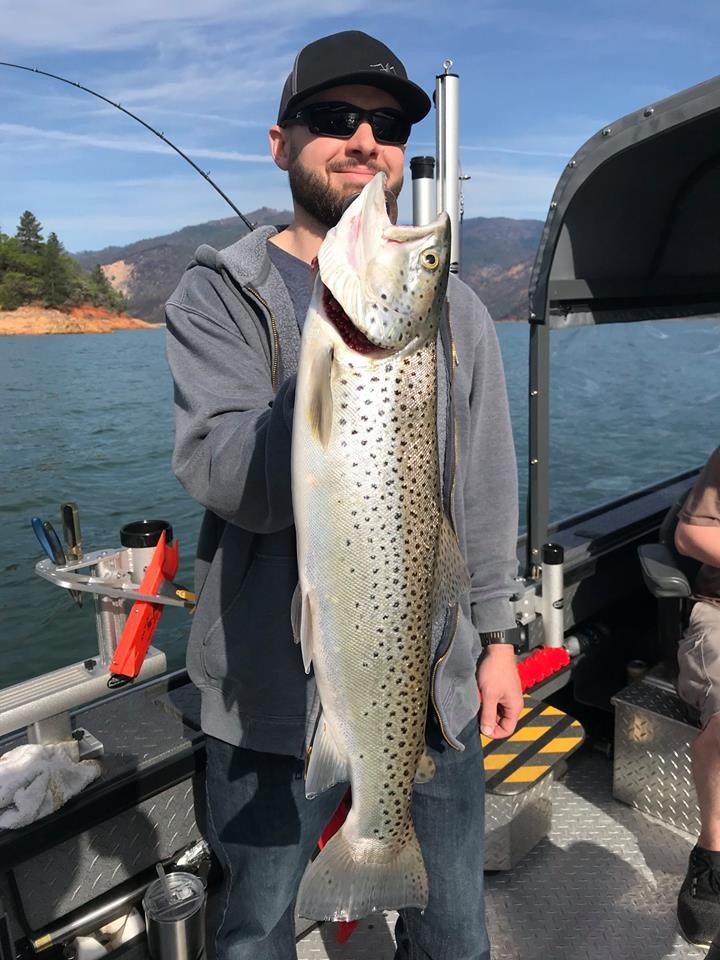 Shasta is my hands down favorite lake. With a capacity of 4,552,000 acre feet, more than 30,000 surface acres and over 365 miles of shoreline Shasta is the state’s largest reservoir and also one of California’s richest lakes in terms of angling opportunity.
Shasta boasts rainbow trout, brown trout, landlocked kings, largemouth, spotted and smallmouth bass along with channel cats, crappie, bluegill and even the occasional sturgeon.
Day in, day out, threadfin shad are the primary forage for Shasta’s gamefish, but in late May and throughout the month of June Shasta offers anglers a bonus known locally as the “plankton bite”.
Plankton? Well sort of. The organisms are actually a form of freshwater shrimp that trout and other fish love to eat when the tiny shrimp are formed into dense clouds.
“The organisms are really daphnia, a form of freshwater shrimp that thrive in cold nutrient rich water,” says Lake Shasta expert Gary Miralles.
“You find these little guys in most of our reservoirs,” relates Gary. “Up in the Pit River Arm of Shasta the activity is particularly intense. The Pit River flows through farm country before it enters the lake and as a result it packs a lot of nutrients that act as the catalyst for the daphnia bloom.”
You’ll typically encounter the plankton early in the day before the sun is on the water and if you don’t know what it is, you’d likely avoid it because it makes the water look awful. Productive patches of plankton rich water look greasy and stagnant and are dotted with leaves, twigs, pine needles and all manner of debris.
When you slide into such a greasy stretch, look into the water and you’ll see a writhing soup as hundreds of thousands, indeed millions of tiny organisms squirming, pulsing and circling. In areas where the organisms are particularly dense they form reddish orange spiral ropes that twist through the water like the lazy smoke of a damp wood fire spirals when disturbed by a gentle breeze.
When you’re in the plankton a glance at the sonar unit shows that the organisms aren’t restricted to the surface. Big masses of them reach nearly to bottom and look a lot like dense weeds on the sonar screen. Fish of all sizes, hold around and within the masses. I’ve even graphed sturgeon cruising the bottom beneath the masses of shrimp.
Since the masses of shrimp tend to cloud the already nutrient dense water even more, you’ll want to probe the “plankton” with bright colored spoons and plugs trolled briskly.
Since the trout are feeding on the shrimp rather than baitfish, you’re not trying to match the hatch. Instead you’re trying to catch the eye of the trout with something fast and brightly colored, triggering a reaction strike.
It’s amazing how the presence of the shrimp draw fish from far and wide. This is particularly true for the lake’s rainbows which seem to really love the shrimp. I’ve routinely caught rainbows feeding on the daphnia that weigh from 3 to 4.5 pounds. When you bring these big trout into the boat, their mouths and throats will often be filled with globs of Cream Of Wheat like shrimp. If the shrimp action has been going on for a while the trout will have incredible red meat.
In a typical year, Shasta’s “plankton” action extends to early July when rising surface temperatures cause the shrimp to retreat into deep water. When this happens the trout that had been concentrated around the shrimp scatter and turn their attention to dining on shad.

French Meadows Reservoir is situated in a heavily timbered granite valley at 5,200 feet near the headwaters of the Middle Fork of the American River. The Sierra Nevada crest is a scant 9 miles distant.
The lake is fairly large boasting 1,900 surface acres and more than 8 miles of shoreline when at full capacity. The nearest town to French Meadows is the hamlet of Foresthill, which sits east Auburn, California.
French Meadows has a strong population of wild brown trout that range up to and beyond 6 pounds. The lake is stocked with rainbows every spring and summer by the DFW. Most of these fish don’t survive, but those that do often times turn up in the catch one or more years later as handsome 12 to 22 inch square tailed holdovers.
The quality of a trout fishery is dictated in large part by the quality of forage it provides. Look beneath the surface of a great trout fishery and you’ll find a diverse and plentiful prey base. Minnows, crawfish, sculpins, juvenile trout, caddis flies and other invertebrates fuel French Meadows’ trout fishery. Minnows represent the lake’s primary forage, with crawfish running a strong second. Caddis hatches occur on most evenings from summer through early fall. On windless evenings, the hatching caddis can provide fly anglers with good surface action.
French Meadows trout aren’t picky in terms of what they will strike. It’s one of those lakes where basic trolling and bait fishing tactics consistently produce quality fish. 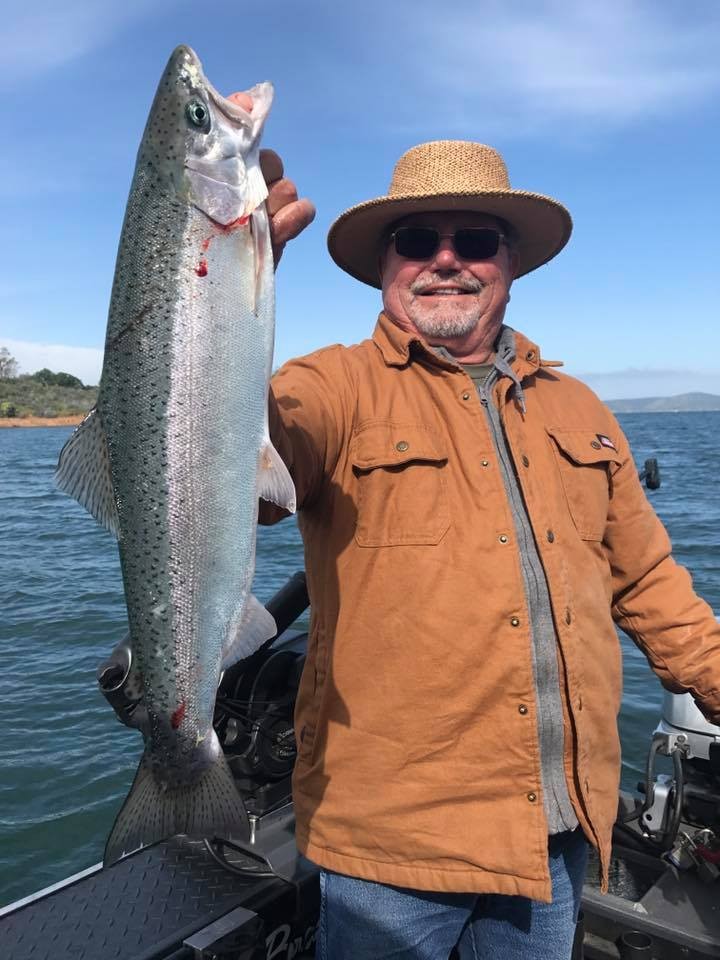 The excellent rainbow trout fishing at Lake Don Pedro, located on the Tuolumne River east of Modesto in the Sierra Nevada foothills, is one of the state’s best kept angling secrets.
Indeed, Don Pedro is one of the best overall fisheries in the state, featuring outstanding fishing for rainbow trout, king salmon, kokanee salmon, rainbow trout, as well as an occasional brown trout.
When Don Pedro’s kings and kokanee are biting the outstanding rainbow fishing that it offers takes a back seat, yet in my opinion, Don Pedro is second only to Shasta in terms of the numbers of rainbows it holds and their willingness to strike.
I recall one time a few years back while fishing a kokanee tournament at the lake when the rainbow bite was so intense that we had to abandon several coves simply because there were so many feeding rainbows in attendance that we couldn’t get our lures down to the deep swimming kokanee!
The average rainbow at Don Pedro runs about 14 inches and fish beyond 20 inches and 3 pounds show up consistently. Shad are the primary forage in the lake and this fact should be reflected in your lure selection.
Early and late in the day during summer, fast trolling with spoons such as Speedy Shiners and plugs like Rapalas works well. When the sun is at its apex it’s time to slow down and drop down, typically into the 40 to 60 foot range.
Wiggle Hoochies and Apex Lures work well when trolled deep at 1 to 1.5 mph. These lures do a good job of imitating a wounded shad. For the ultimate in match the hatch effectiveness many anglers “roll” shad at Don Pedro.
Rolling shad simply refers to slow trolling frozen threadfin shad rigged on a special sliding snell that causes the minnow to roll seductively when drawn through the water.
When the rainbows play hard to get and refuse shad imitations a threaded worm either teamed with a flasher or small dodger is an offering that seldom fails at Don Pedro.