Striper fishing on the San Joaquin River in the Delta has been superb this year, with a few slower periods mixed in. Wanting to join in the action before the fishing slowed down, I fished with James Netzel of Tight Lines Guide Service and veteran striper anglers Mark Wilson, Clyde Wands and Roy Rodarte on Friday, May 3.
“We are calling it the ‘buzzards are following us’ tour,” quipped Netzel. “Everybody on the boat besides me is over 65. Mark and Clyde taught me all that I know about fishing the Delta. I owe them a lot.”
On the evening before, Netzel got a shocking discovery – thieves had stolen 12 rods and 13 reels, $5800 worth of gear, from his boat. So, Wilson and Wands brought their trolling rods with them so we had plenty of rods to fish with. 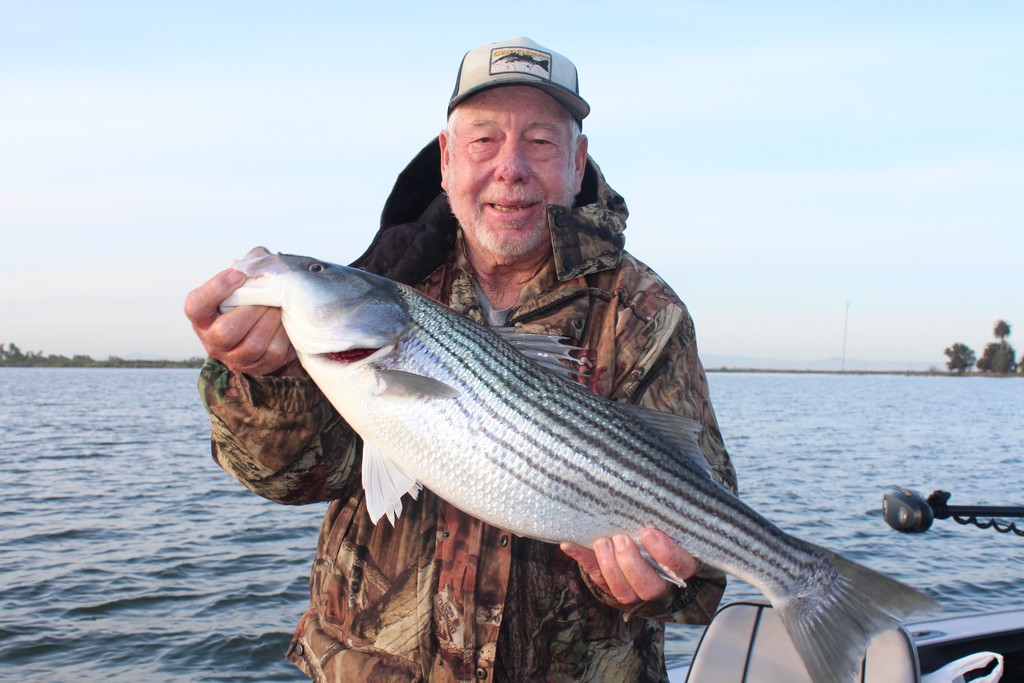 We met James at his boat in the Pirate’s Lair Marina and left the dock at 6 a.m. Our first stop was just minutes away at the Old River Flats at the junction of Old River and the San Joaquin.
We hooked one keeper and one shaker right way, releasing both. As we trolled with deep diving Yozuri Crystal Minnows and P-Line Predator Angry Eyes shallow runners, we hit a big school of fish “hay stacked” 10 feet off the bottom in 25 to 25 feet of water. We had a triple hook-up, with Clyde, Mark and I reeling in keeper fish to 8 pounds.
However, a sea lion suddenly appeared, spooking the fish, and we didn’t get any more bites there. James drove the boat to Light 56, False River and Eddos, where we hooked a couple of more keepers.
As the morning proceeded, Netzel decided to try the area east of the Antioch Bridge. We experienced a good bite there, finishing the day at 11:30 a.m. We kept a total of 8 fish to 8 pounds while trolling with shallow running Yo-Zuris and P-Line Predators in 7 to 9 feet of water.
“Striped bass fishing has been challenging this year with the high water conditions,” said Netzel. “We experienced amazing fishing in March. The fishing slowed down in early April then picked up again. We concentrated on the San Joaquin this year and fished the Sacramento just one day.”
Since that trip, Netzel continued to report striper limits, with his trip the day after our adventure producing five limits of stripers to 5 pounds.
For striped bass success on the Delta, Netzel advised anglers to depart from the norm. 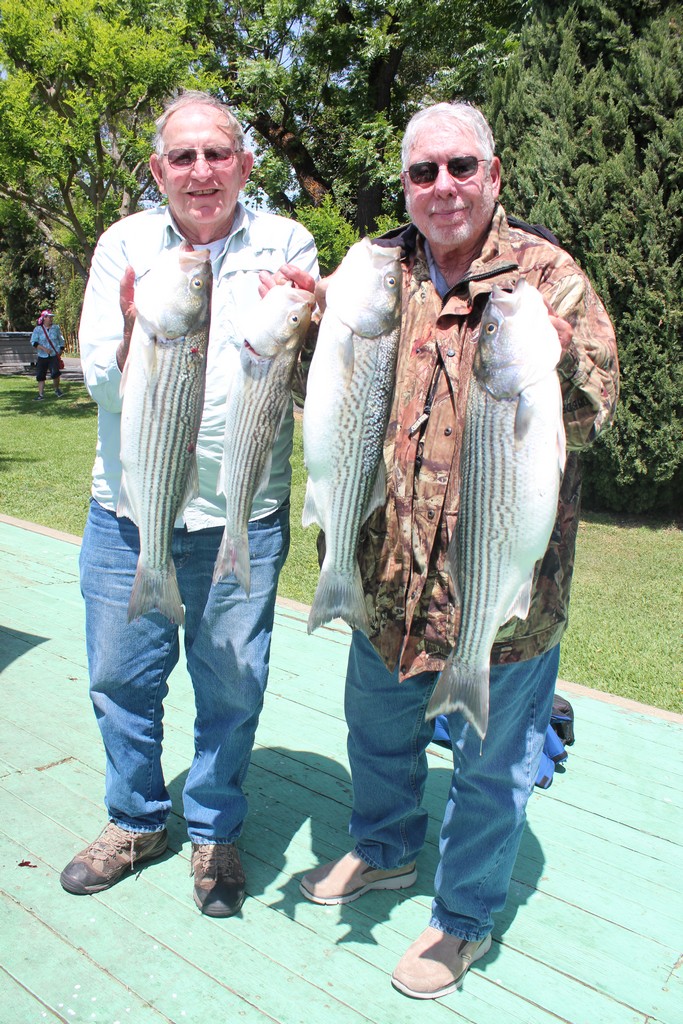 “Many people follow a set rulebook on how deep and fast to troll,” stated Netzel. “I’m changing it up by changing the speed and the setbacks. For example, if you’re trolling against the current, you can go as shallow can go 11 feet without scraping the bottom. If going with the current, you can go 15 feet deep with normal setbacks 75 feet behind the boat while using Fins 25 lb. 40 G braided line.”
Although he prefers trolling, Netzel also drifted with live jumbo minnows when the fishing was tougher this year. Netzel also has slow trolled mudsuckers for the stripers.
Netzel will fish the Delta through May 16, target rainbow trout and king salmon for a couple of weeks at Folsom and then head to Stampede for kokanee salmon from late May until early September.
For more information, contact James Netzel at Tight Lines Guide Service, (888) 975-0990.
Striped bass have a long and interesting in California. Reviled by Linda and Stewart Lynda Resnick, billionaire owners of the Wonderful Company, and other agribusiness interests, striped bass are an introduced species native to the Eastern U.S. rom the Gulf of St. Lawrence to Alabama. They are very popular with California anglers, due to the hard fights they provide and the array of methods used to catch them, including anchor fishing with bait, live bait drifting, trolling, jigging with spoons, surf casting, top water lure fishing and fly fishing.
The initial introduction took place in 1879, when 132 small bass were brought successfully to California by rail from the Navesink River in New Jersey and released near Martinez, according to the California Department of Fish and Wildlife. Fish from this lot were caught within a year near Sausalito, Alameda, and Monterey, and others were caught occasionally at scattered places for several years afterwards.
“There was much concern by the Fish and Game Commission that such a small number of bass might fail to establish the species, so a second introduction of about 300 stripers was made in lower Suisun Bay in 1882,” the CDFW states.
In a few years, striped bass were being caught in California in large numbers. By 1889, a decade after the first lot of eastern fish had been released, bass were being sold in San Francisco markets. In another 10 years, the commercial net catch alone was averaging well over a million pounds a year. However, in 1935, all commercial fishing for striped bass was stopped in the belief that this would enhance the sport fishery.
The peak years for the recreational striped bass fishery were in the late 1950s and early 1960s. The fishery declined after the beginning of massive water exports to Southern California and corporate agribusiness on the westside in the San Joaquin Valley starting in 1967 after the completion of the State Water Project, although the stripers continue to provide a quality fishery highly prized by California anglers.