by Jack Naves
I often find myself driving through Downtown Sacramento on Interstate 5. I never pass up the opportunity to peer over the rail to see if any boats are anchored up on the river. When I see groups of tightly packed boats in the springtime, I know what time it is. Shad fishing has arrived.
I’ve always heard of “100 shad days” and kind of rolled my eyes. Is it is even possible to catch 100 shad in a day? On May 8th, I learned that not only is it possible, but it is a whole lot of fun.
I met my fishing partner Mick Berklich on the morning of May 8th at the Miller Park boat ramp near Downtown Sacramento. We motored upstream against the ripping current and anchored above the I Street Bridge. With the roar of the freeway in the background, we lowered our offerings using four and eight once sinkers to create a spread.
I was trying to explain to Mick that shad usually don’t start striking until mid-morning, when one of the rods went down. As Mick battled the first shad of the day, another rod buried towards the water – a double to start the day. 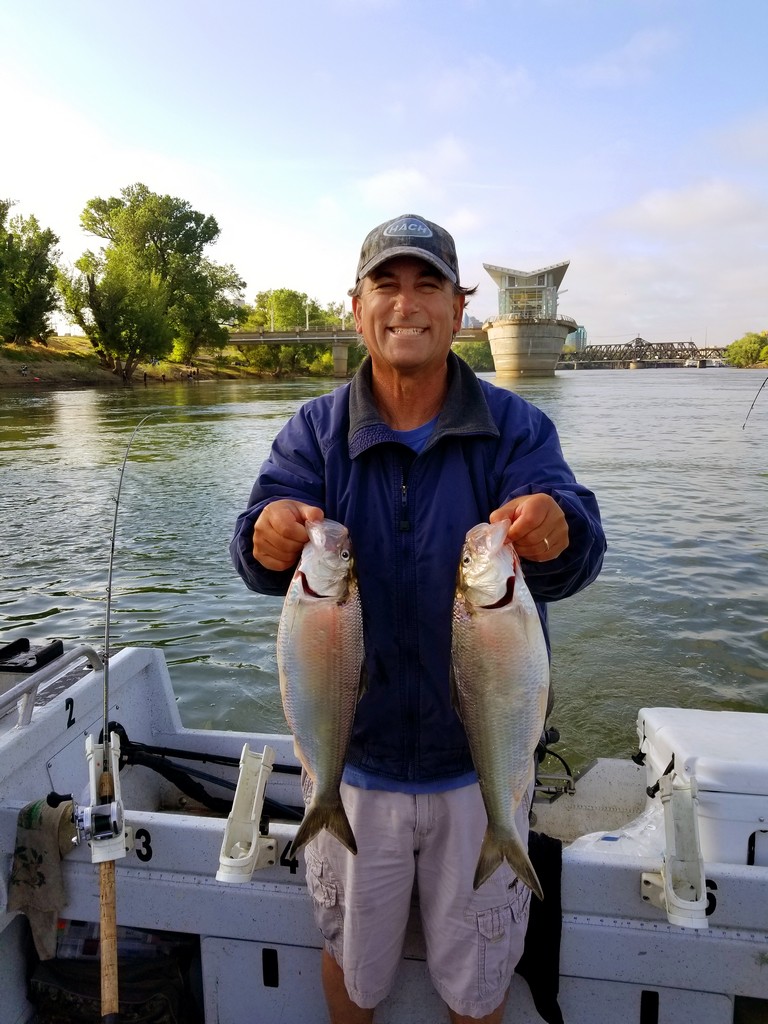 We began to realize that 100 shad days really are possible. The fishing was so good that we couldn’t keep one or two rods in the water at any given time. We had doubles, triples and even landed two shad on one rod, when both lures on a high-low setup hooked shad. Mick even picked up a nice keeper-sized striper on the shad rig.
For American Shad, I run a high-low setup similar to what would normally be used for surf fishing or ocean bottom fishing. You fish vertical, with a sinker clipped to the very end of the line that rests on the bottom. Eighteen inches above the sinker, there is a ten-inch dropper leader coming off the main line.
A second ten-inch dropper leader is spaced 24 inches above this. You slowly lower the rig down and back bounce it until the sinker rests on the bottom. Once the line is reeled tight, the main line stays vertical and the leaders trail behind in the current.
To connect the two leaders to the main line, I use small cross lock swivels that help prevent line twist. I like to use the smallest sized Dick Nite spoons in half chartreuse, half-pink. You can leave this rig in the rod holder until they strike, or jig it up and down about a foot at a time. The jigging can really make a difference when the bite is slow.
At ten o’clock we had landed 39 shad, and decided to move upstream to an inside bend to fish for stripers. At this location, we each fished with one shad rod and one striper rod. We hooked two more keeper stipers, and I lost a big striper that would have gone double-digits for sure.
Even though we were in one of my striper spots, we still managed to scratch out eight more shad by noon. We had landed a whopping total of 47 shad and 3 keeper stripers! We pulled rods and headed to the ramp to reflect on an epic day of fishing in Downtown Sacramento.

Most kokanee snobs like myself snicker at the idea of keeping bone-filled shad for the dinner plate. However, I have finally discovered the secret of how to cook and clean shad – can them using white vinegar to dissolve the bones. You can either smoke them first, or can them plain. Here is a detailed look at the two different methods.
First off, you will need a pressure canner, and equipment such as glass ½ pint mason jars and new lids. If choosing the smoking method, you will need a smoker and alder chips.
In either case, start by filleting the shad. Remove the large rib bones, dark red fat, and skin, but leave the small bones in place. Next, rinse and pat the fillets dry with paper towels. Then, follow your canner’s directions for sanitizing and preparing the equipment
If you are using the smoking method, lightly salt the fillets. Salt about as much as you would if you were grilling fish. Next, smoke the fillets for about 60-90 minutes at 120-150 degrees using alder chips. Don’t overcook, just enough to give them smoky flavor. Remove from the smoker and cut the fillets into chunks.
Next, add about ½ inch of olive oil to the bottom of each mason jar. Add ½ teaspoon of white vinegar to each ½ pint jar to dissolve the bones. Pack the jars with the fish chunks, and then top them off with more olive oil so it covers the fish. Remove air bubbles with a plastic knife or tool. Follow your canner’s directions for the rest of the canning process.
This method comes out really good, close to how canned sardines taste. I enjoy this recipe on Saltine crackers as a snack or meal.
For the plain method, cut the raw shad fillets into chunks and pack the jars without smoking or adding olive oil. Add ½ teaspoon of white vinegar to each ½ pint mason jar to dissolve the bones, and top off with ¼ teaspoon of canning salt. Follow your canner’s directions for the rest of the canning process. I use the plain shad in tuna sandwich or fish cake recipes – bone free!
The Downtown Sacramento area will see shad action from mid-April through early June, while the upstream reaches of the American, Feather, and Sacramento Rivers will produce shad until at least July. Shad fight great, and make for a delicious snack if prepared right. Now is the time to get out there and get your shad on!