By Mike McNeilly
I don’t get out after stripers the way I used to. Logistically, I just can’t get over the hurdles. They are a long ways from my home, and my time is stretched thinner than ever. There are many clichés I can cite, work, kids and lack of funds… etc. I used to have a real fire in my belly for stripers, but now I just enjoy being out on the delta. There’s something about that fertile green water and the rolling lush hills of the Lower Sacramento that beckon to me this time of year.
This has been an exceptionally wet winter/spring, and the fishing has been a little off of its usual pacing from what I can see. During the peak of the drought in 2014-15, the striper spawn started as early as mid-February. This year winter extended well into the end of March. The first real signs of a spring bite began somewhere around early to mid-April. The Sacramento side of the delta was blown out. The river was scooting along briskly, and the color was turbid brown at best. 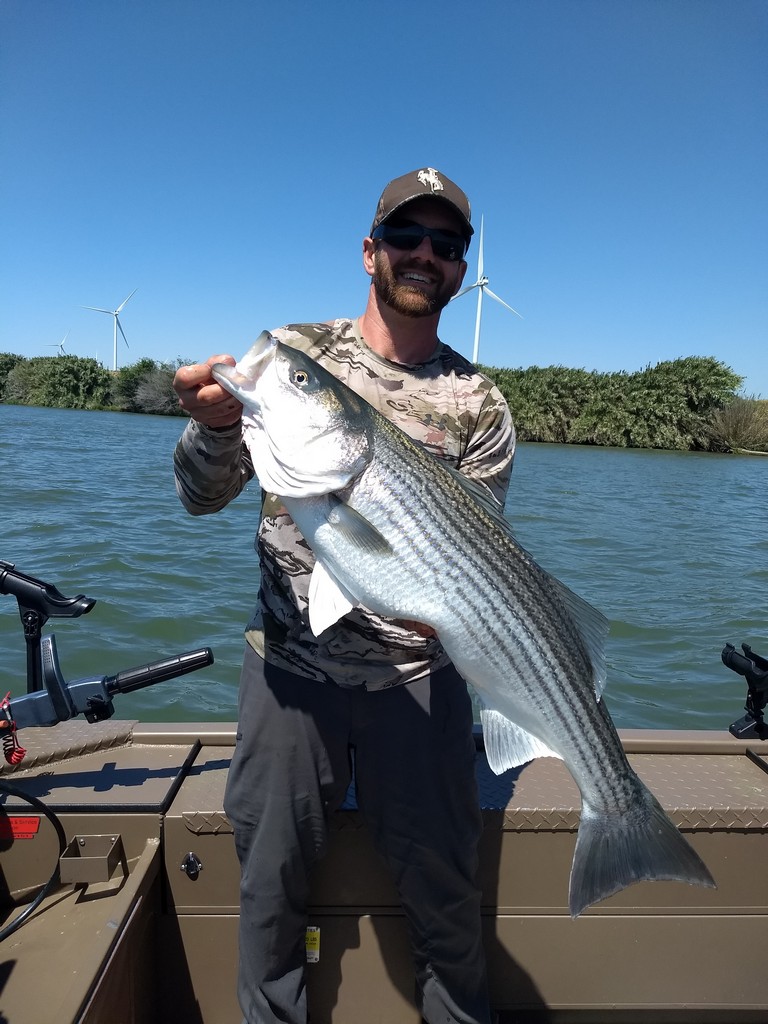 That meant that everybody with cabin fever found their way to the relatively clear waters of the San Joaquin side of the delta. There undoubtedly were plenty of stripers in the off color waters of the Sacramento, but the conditions were poor for targeting them. Suffice it to say that the fishing pressure on the San Joaquin side was pretty stiff early this spring.
In early April, I found myself trolling amongst the masses on my buddy JW’s “stanky” brown Smokercraft. The brown boat started out slow, but we managed to scratch out some quality fish shallow trolling Yo-Zuri’s along a flat of witches’ hair. The bite was far from hot, but we ended the day one fish short of limits for 4 guys.
Better yet was the grade of fish we ran into. They were slabs. At one point my rod bent to the cork, and a big fish yanked line off my line counter reel willy-nilly. After a spirited battle, braided line and galvanized treble hooks prevailed in putting the lineside in the net. It was a quality fish of almost 15 pounds.
It’s always good to see the captain get in on the action. For many years I have been the guy driving the boat, and now I am quite comfortable enjoying the role of rod holder, fish “reeler-inner” and net boy. Yes, I am aware that there are no such words in the English Language as “reeler” and “inner,” but I challenge any of you to never having used such sayings.
What can I say folks, I grew up in Anderson, California. We made up our own words, but I digress. Anyhow, JW found himself tied to a large striper late in the day. In fact, the other fellows onboard that day were ready to throw in the towel, but we hooked a small keeper on our second to last trolling run.
Buoyed by that big fish, I suggested, “Guys, we can’t quit while they are still biting.” Luckily, my reasoning was sound, and JW managed to hook what would turn out to be yet another almost 15 pound striper. This big striper fought like all other big stripers do; hard. The fish made several powerful runs, but ultimately succumbed to steady pressure and a tight line. After several grip and grin photos, we were all on our way home with an ice chest full of delicious white meat fish filets.

Fast forward a couple of weeks, and the striper reports keep trickling in from friends out pounding the delta. The stats range from pretty good to downright brutal depending on the day. Meanwhile, I have notched my belt with a Lake Almanor skunk and then a beat down on one of my favorite bass lakes.
The Lake Almanor skunk is the most perplexing and dismaying I’ve had in a while. I rarely fail on this lake, and this is a good old fashioned humbling, kick to the nuts, ego smasher. I had to shoot a couple of wild turkeys to get my mojo back. Feeling good after winning a game of wits with a bird the size of a pea, it was time to head back to the delta. This time, the water on the Sacramento side would be plenty clear for fishing.
Early May can be a fine time to be on the delta. It also can be 95 degrees and either super windy or without a lick of breeze. In this case, it was perfect weather. Temps were in the high 70’s, and the water had ideal 3-4’ of visibility. The only problem was that conditions were pretty similar from Stockton to Chico on the San Joaquin, Sacramento and all their respective striper filled tributaries.
In other words, the fish were spread out all over California. This translates into lots of hours trolling envisioning what the strike of a hungry striper might look like on your otherwise lifeless rod. For many hours that morning, I stared at my tightly wiggling rod tip while laughing at the morning’s commentary on JW’s brown boat. The San Joaquin side was dead for us in the a.m., so a move to the Sacramento was queued for lunch time.
About mid-day, we found ourselves trolling along the West Bank as we have countless hours before. The spot is far from a secret but with good reason. Stripers of all sizes travel up and down this route on their trip up the river to spawn. They also corral shad and other baitfish here. As big fish often times seem to do, they hit in less than opportune times. In this instance, the big girl clamped onto my Yo-Zuri right as we weaved between another boat shallow trolling and a boat on anchor bait fishing.
As soon as the fish hit, it became apparent to everybody that I had hooked an exceptional fish. The rod bent to the cork handle, and line just started flying off the reel like Rip Taylor throwing confetti. Most accounts of fish going on long runs are vastly over exaggerated, but a line counter reel can keep the embellishment to a minimum.
On the first run, the fish yanked out 80’ of line. Thankfully, the big striper ran out into the middle of the river and stayed away from the anchored bait fishing boat’s lines. At that point, experience with these fish paid off. The most common way to lose a big striper is to pull too hard and open up the relatively weak 2x strong treble hooks on a stock Yo-Zuri. Prudence says to fight the fish with a light drag and a tight line.
Be patient. Let the fish wear out. Stripers have hard rubbery mouths, and most of the time you will need pliers to extract the hooks. Keep the line tight, and the hooks usually won’t fall out unexpectedly. This was no exception. She made a couple more spirited runs, but the landing of this fish proved to be almost inevitable. The hook closest to the bill of the plug was firmly wedged in the fish’s jaw, and the hook nearest the tail was just under the chin and buried in the meat below the gill plate.
The rest of the day was fairly uneventful. We managed just a few more keeper sized fish to 6 pounds. However, the thing that captivates my mind while dragging plugs in the delta for stripers is the, “You never know factor.” At any moment, a fish of just ridiculous proportions could swallow your plug; a fish the size of medium sized dog or a 5-8 year old human child. That’s what keeps me coming back.