It’s that time again. The saltwater fishing season is underway, halibut and bass are showing in San Francisco Bay. Along the coast lingcod and rockfish are on the chomp and oh yes there are salmon on the prowl too.
So far the salmon bite has been very good, primarily to the south of the Golden Gate and as spring gives way to summer things should get even better as the fish move north.
Preparation is the key for fishing success whether we are talking about bluegill in Uncle Bob’s pond or yellowfin tuna from the deck of a long range boat, so let’s take a little time to go over what makes for a successful day of charter boat salmon fishing. For the salmon virgins, out there much of the stuff I’m about to unravel represents uncharted territory. The old salts among our ranks can consider it a review. Here we go!
Most of the salmon caught on Golden State charter boats are hooked while trolling. The way we troll from large charter boats here in northern California is as ingenious as it is primitive.
We troll with large round sinkers that weigh from 16 to 48 ounces attached to our lines. These sinkers fall off when a salmon is hooked via a spring-loaded sinker release. It’s somewhat like a primitive form of downrigger fishing, except that the weight is attached to your line instead of a downrigger cable and is lost with each hookup. 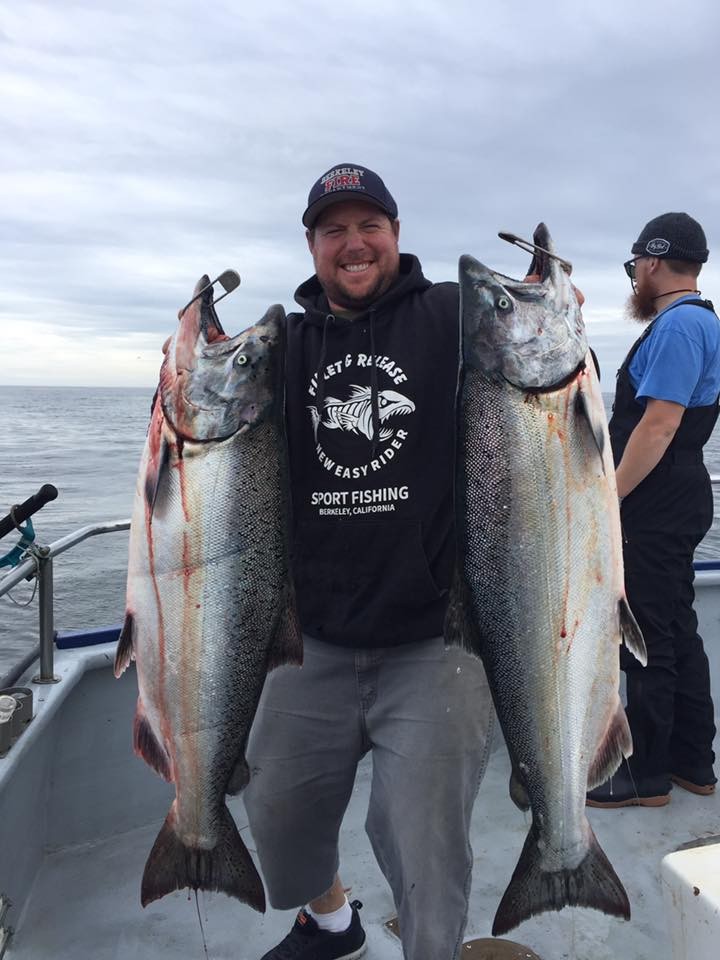 This approach is ingenious because it allows 20 to 30 anglers to troll from a single boat. It’s primitive because it’s a method we’ve been using for the past four decades that I can remember and probably a lot longer than that!
When I go salmon trolling I like to bring a pair of rods, one lighter rod spooled up with mono and a heavier rig spooled up with 65-pound braid. If the salmon are shallow, say from the surface to 30 feet, the mono rod is preferred. Deeper than 30 I run with the braid.
My all time favorite mono rod is a classic 7’ E-Glass Fenwick Pacific Stick teamed with a Penn 320 GTI reel spooled with 25 pound line.
This outfit is responsive and powerful, yet forgiving enough to cushion the headshakes and surges of a husky king.
My braid rig is a heavier albacore rod teamed with a Penn Baja Special reel spool with 65-pound braid. This rig sacrifices forgiveness, but since the braid cuts through the water much more easily than mono, it allows me to get much deeper than I ever could with a traditional mono rig.
Playing fish and wearing them down is noble, but I’ve got to say that from years of observation I’ve noted that the longer a salmon is played the better the chance that it will toss the hook. 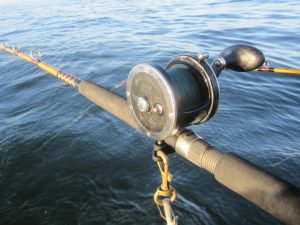 When I hook fish with my mono rig I play them fairly conservatively, yet when I hook a fish on my powerful braid outfit I’m much more aggressive. The rig gives me the power to get the fishing moving my way and I do everything in my power to basically strong arm the fish to the back of the boat. Contrary to what you might expect, I’ve yet to pull the hook out of the mouth of a salmon using this aggressive approach. Sometimes you’ve got to ask yourself, “Do I want to play with this salmon or do I want to eat him?”
The heart of any charter boat trolling rig is the sinker release, which you attach to the end of your main line.
The most widely known sinker release is the copper tube variety called the “dog whistle”, since it looks like a silent dog whistle. Pull on the rear of the release and the tines of the cotter pin inside the release retract and slide behind a slot in the tubing. The eye of the sinker is placed into the slot, the tension is relieved on the cotter pin and one of the tines will skewer the eye of the sinker, holding it in place. When a salmon hits, it pulls on the cotter pin, the tines retract and the sinker falls out.
Of course, your 5 to 7-foot leader attaches to the opposite end of the release and that’s where you’ll be attaching your offering be it rigged bait or a lure.
Now I love to run hoochies and Apex Lures and I’ve killed many an ocean salmon on both. While I never set foot on a salmon boat without some of these offerings in my bag, the most effective bait day in day out is rigged anchovies and/or herring…
These days there are a lot of innovative plastic hoods and bait rotators on the market that you can “snap” your bait into the make it roll perfectly every time. These rigs hook a lot of salmon, but overall I prefer my baits on an old school crowbait rig or impaled on hook fitted with a stainless steel wire tether like those that Captain Joey Gallia of the New Easy Rider constructs (see illustration).
While bait works much of the time, there are days when salmon just aren’t interested in the real stuff and that’s when you want to break out a Krocodile spoon, Apex Lure, or Hoochie.
Okay let’s troll… Once at the fishing grounds, the skipper will instruct how deep to lower your bait. Don’t just free spool your rig down, rather lower it to the specified depth with one foot “pulls” of line. This will ensure you’re at the proper depth, while preventing tangles. After the bait or lure is at the proper depth engage the reel’s clicker and place the rod in the holder.
When a salmon strikes don’t grab the rod too quickly. Let the fish fight the rod tip for about 10 seconds before making a move, this ensures that the salmon is firmly hooked and allows the sinker time to fall away.
When you hook up yell “Fish On” and then follow any and all of the deckhand’s orders. He’ll be directing traffic and doing his utmost to ensure that you put the fish into the box!
This last bit of advice will make charter skippers, deckhands and experienced charter boat trollers all scream in pain, but here it goes anyway. You’re on a charter boat out on the ocean. There is water and salmon all around the boat, so it shouldn’t matter where you are positioned along the rail right? Wrong!
I’ve spent hundreds of hours trolling from charter boats and I can tell you from direct observation that the guys fishing off the rear of the boat, particularly the back corners and the guys fishing off the bow hook the most fish most days. Baits trolled off the bow theoretically encounter the fish first. Guys fishing off the transom have the luxury of fishing deeper than anyone else on the boat since they don’t have to worry about snagging an angler fishing behind them. Both of these advantages can be huge when it comes to competing with 25 other anglers to hook fish.
The early bird gets the worm, but while that bird is hunting worms, the early arrivals to the charter boat get to camp out on the prime locations and almost always end up eating salmon fillets!