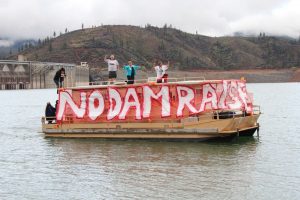 California Attorney General Xavier Becerra and a coalition of fishing and environmental groups have each filed a lawsuit to block the Westlands Water District, the largest agricultural water district in the U.S., from taking what they described as “unlawful” action to assist in the planning and construction of a project to raise the height of Shasta Dam.

“The project poses significant adverse effects on the free-flowing condition of the McCloud River and on its wild trout fishery, both of which have special statutory protections under the California Wild and Scenic Rivers Act,” according to a statement from Becerra’s Office. “The Act prohibits any agency of the State of California, such as Westlands, from assisting or cooperating with actions to raise the Shasta Dam.”

The dam raise would also destroy many of the remaining sacred sites of the Winnemem Wintu Tribe that already lost 90% of its ancestral lands when the dam was completed and Shasta Reservoir filled in 1945.

“This project is unlawful. It would create significant environmental and cultural impacts for the communities and habitats surrounding the Shasta Dam,” said Attorney General Becerra. “Today we ask the court to block this illegal attempt by the Westlands Water District to circumvent state law.”

The lawsuit alleges that under the Wild and Scenic Rivers Act, “Westlands is prohibited from planning, funding, or assisting with any project that could adversely affect the McCloud River’s flow or its fishery.”

Federal studies of the proposal concluded that raising the dam would increase the already inundated portion of the lower McCloud River by 39 percent, according to the A.G.’s Office.

“This further inundation would have a significant negative impact on the river’s fisheries and habitats, and submerge sacred sites of the Winnemem Wintu Native American Tribe,” Becerra said.

Despite these impacts, Becerra said Westlands has “unlawfully assumed” the lead agency status for the $1.3 billion project and has allocated funding of over $1 million for the preparation of an Environmental Impact Report under the California Environmental Quality Act (CEQA) as part of its planning to become a 50 percent cost-sharing partner with the federal government.

A copy of the complaint can be found here.

Friends of the River, Golden Gate Salmon Association, Pacific Coast Federation of Fishermen’s Associations, the Institute for Fisheries Resources, Sierra Club, Defenders of Wildlife, and the Natural Resources Defense Council (NRDC), represented by Earthjustice, are also urging the court to find Westlands in violation of the California Wild & Scenic Rivers Act in their lawsuit.

“The dam raise would harm—not help— salmon downstream of the dam,” said John McManus, President of the Golden Gate Salmon Association (GGSA). “The science, including the findings of the U.S. Fish and Wildlife Service, clearly shows this harm, which is why we’re taking action to protect all of the salmon in the Sacramento River.”

“Californians decided to protect the McCloud River in 1989 because it’s valuable to all of us,” said Ron Stork of Friends of the River. “The ill-conceived dam raise would flood a free-flowing reach of the river, harm a prized fishery, and destroy sacred tribal sites. It’s time to end Westlands’ disrespect of the California Wild and Scenic Rivers Act.”

A 1989 amendment to that law protects the McCloud River by prohibiting any agency of the State of California from assisting or cooperating with the planning or construction of any dam that could adversely affect the McCloud River’s free-flowing condition or its wild trout fishery, according to Stork.

“Westlands is violating the law by cooperating with the Trump Administration’s aggressive plan to raise Shasta Dam,” added Stork. “The largest agricultural water district in the country is trying to use taxpayer dollars to gain more water to sell to corporate agriculture in the San Joaquin Valley.”

Stork said efforts to raise Shasta Dam have “rumbled for years,” but the Obama Administration tabled the project. Now the Trump Administration, with Westlands’ former lobbyist David Bernhardt serving as Secretary of the Interior, has brought it back despite protests from California leaders. The project timeline has been fast-tracked with construction to begin by the end of this year.

“Westlands is playing a key role in advancing the project by leading and funding an environmental impact review and negotiating to cover part of the more than $1.4 billion project cost. The irrigation district even purchased 3,000 acres along the McCloud River to clear the way for the project,” said Stork.

The Winnemem Wintu Tribe, who have led the fight against the Shasta Dam raise for many years, commented in a Facebook post after the Attorney General filed the lawsuit: “Finally, a California state agency is pushing back against Westlands’ dam raise scam. Hopefully, the extent of this corrupt scene will be revealed and rejected.”

On April 19, the Rose Foundation for Communities and the Environment announced the selection of Winnemem Wintu Tribal Chief and Spiritual Leader Caleen Sisk as the winner of the 2019 Anthony Grassroots Prize, an annual $1,000 Earth Day award recognizing an outstanding example of grassroots environmental activism.

“Since assuming leadership of the Winnemem Wintu Tribe in 2000, Chief Sisk has focused on uplifting the cultural and religious traditions of the tribe, such as the revitalization of the Winnemem’s H’up Chonas (War Dance) and BaLas Chonas (Puberty Ceremony),” the Rose Foundation said. “She also advocates tirelessly for salmon restoration, the undamming of rivers and lakes, and the basic human right to clean water. Chief Sisk is currently leading the Tribe’s resistance against the proposal to raise the Shasta Dam, and is an integral voice in the efforts to bring salmon home to the tribe’s sacred watershed above the dam.”

The Westlands Water District responded to the lawsuit filed by Attorney General Becerra with the following statement:

“In the complaint, Attorney General Becerra asserts that the District is violating Public Resources Code section 5093.542. Contrary to the allegations by the Attorney General, the District is not violating the law. The District explained its actions in two letters in February to the State Water Resources Control Board and the California Department of Fish and Wildlife. As explained in those letters, if Reclamation decided to proceed to construction, federal law (Water Infrastructure Improvement for the Nation Act) requires Reclamation to have a local cost share partner(s). The District has not yet made any determination regarding the Shasta Dam Raise Project. Rather, the District is conducting the environmental review that Attorney General Becerra complains of to adequately evaluate the question before it: whether Public Resources Code section 5093.543 precludes the District from becoming a local cost share partner. The District’s approach to the environmental review will allow it to consider that question with the full breath of information required by the California Environmental Quality Act.

Westlands Water District supports state and federal efforts to improve the water system and provide additional storage for communities throughout the state.”