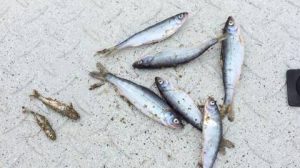 On May 29, the Federal Energy Regulatory Commission (FERC) sent a letter to the California Department of Water Resources inquiring into the stranding and deaths of thousands of spring run Chinook salmon on the Feather River in April, as reported by guides and fishermen out on the river.

The stranding began three days after the California Department of Fish and Wildlife (CDFW) released 333,442, spring-run Chinooks from the Feather River Fish Hatchery at Gridley and another 332,692 at Boyd’s Pump, a total of 666,134 salmon, according to James Stone, fishing guide and president of the Nor-Cal Guides and Sportsmen’s Association.

Guides and fishermen reported thousands of juvenile fish were stranded up and down the river 3 days after the release when flows were dropped dramatically.

“Three days after the fish releases, DWR dropped releases by 10,000 cubic feet per second (cfs), from 25,000 cfs to 14,750 cfs, within less than 24 hours. This made the river drop inside of its bank, leaving baby salmon in pools stranded outside of the river,” said Stone.

“Concerned anglers did fish rescues. They took the stranded fish from the pools and put them back into the river. They rescued thousands of fish,” said Stone.

The spring Chinook is a state and federally listed threatened species. The spring run was once one of the largest runs of salmon, but dams now block fish from returning to their historical spawning grounds on Central Valley rivers and creeks.

He reminded DWR that “Article 31 of your project license requires that you operate the project in such a manner that changes in rates of release from Oroville Reservoir and afterbay dams will be gradual and minimal at all times insofar as this is consistent with operation requirements.”

“The inquiry we received was related to the initial use of the rebuilt main spillway on April 3, 2019, and the subsequent ramp down of flows following its successful use.,” he wrote. “The allegation states that a possible rapid ramping down of flow releases from the main spillway may have caused stranding of juvenile salmonids in the lower Feather River. In our initial investigation, we discovered that the local fishing community observed stranded juvenile salmonids (some of which perished) in the lower Feather River,” said LoVollo.

Following an inquiry with the California Department of Fish and Wildlife (CDFW) staff, LoVullo said they also “learned that the flow reductions resulted in stranded fish that included mortality of spring-run Chinook salmon that had been released from the Feather River Hatchery a few days prior to the flow reductions.”

During their initial investigation into the stranding of salmon in April, LoVullo also heard of an additional fish stranding event in the lower Feather River that occurred on March 12, 2019.

“From the information available, we understand that flows in the low flow channel immediately dropped from approximately 2,000 cfs to 600 cfs without any intentional ramping down. Apparently, the flow reduction resulted from a planned shutdown of the Hyatt powerplant and switching of minimum flow release to the river outlet valve, which resulted in fish stranding in the lower Feather River,:

In order for FERC to review DWR’s compliance with license Article 31, he asked DWR to provide the following information related to the March and April 2019 flow reductions and subsequent fish stranding events:

• Flow data from the low and high flow channels on the preceding day, day of, and day following the above flow reductions

• An account of, and estimate of the fish mortality resulting from the March and April 2019 flow reductions

• Documentation of consultation with the resource agencies, including CDFW and NMFS

LoVullo directed DWR to file their response to this request with the Commission Secretary within 30 days of the date of the letter.

Erin Mellon, Assistant Director of the Public Affairs Office of the Department of Water Resources, said DWR is still working on a formal response to FERC’s letter. However, she responded briefly to the fish stranding in a statement that didn’t acknowledge whether or not the stranding had occurred, as described by anglers and guides.

“This year has had great conditions for salmon with higher than normal flows being released by DWR as well as cooler water in the system. Whenever there is a change in flows – whether as a result of operations or natural conditions – there is a potential for stranding. We try to avoid impacts wherever possible, but sometimes operational changes can affect fish,” she said.

“That is why we invest $2.5 million every year in the fish hatchery which produces 8 million salmon and 450,000 steelhead each year. That’s one of the many reasons the Feather River is one of the most productive rivers on the West Coast for salmon. DWR has already raised 2 million spring run Chinook and is in the process of releasing 6 million fall run Chinook salmon,” Mellon added.

“An interesting point I’d add is that releases from the spillway can actually help fish migration as it pushes them into the Delta and out to the ocean, as these high flows provides clear queues for the fish to migrate and reduce mortality from predators by enhancing turbidity. These flows can also temporarily move fish onto the floodplains which enhances growth and survival. We always coordinate operations with CDFW as well as FERC an as you know, operational decisions require balancing a number of factors including public safety, flood control, environmental needs, water supply and more,” she concluded.

Jordan Traverso, the CDFW Deputy Director of Communications, responded to the letter by disputing the reports of stranding laid out by FERC.

“CDFW and DWR scientists did not observe fish standings as described by the fishing guides during two days of surveys along the entire Feather River downstream of the release location, and we have seen no evidence to support allegations of “tens of thousands” of fish lost,” said Traverso. “CDFW staff were aware of the flow changes and had meetings and calls with DWR to coordinate each of the flow drops referenced in the FERC letter.”

“We worked with DWR staff on surveying for stranded fish. Even with the hatchery release large numbers of stranded fish were not observed and we felt no rescues were needed,” said Traverso.

However, eyewitnesses, including Bob Boucke, a member of the boards of Golden Gate Salmon Association and Nor-Cal Guides & Sportsmen’s Association and a Sutter County Fish and Game Commissioner, say reports from guides and fishermen on the river and extensive video and photos show otherwise.

“I personally saw hundreds of stranded fish in the ponds 3 days after they cut the flows and the birds were ravaging them as fast as they could. I probably would have seen even more stranded fish if I had been out there sooner before the birds started scavenging them. And I walked just 1-1/2 miles of the river.”

“There was no excuse for DWR to drop the water like they did. They promised they wouldn’t do that. The practice of reducing flows needs to be done properly,” emphasized Boucke.

To continue supporting the Nor-Cal Guides and Sportsmen’s Association, you can join today at NCGASA.org.