One young angler after another hooked catfish on the pleasant June afternoon at Hagen Community Park in Rancho Cordova.
Three-year-old Nolan Moua and his dad, Chris Moua ,of Sacramento teamed up to catch a robust channel catfish just after I arrived at the park, stocked that morning with 1500 pounds of channel cats through the California Department of Fish and Wildlife’s “Fishing in the City” program. They hooked the fish while soaking shrimp.
Jackson Trafican landed two catfish while using shrimp as he was assisted by Krista Schugt of Woodland. 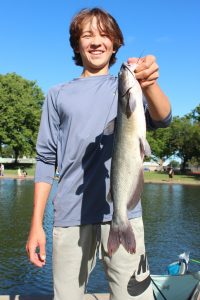 Finally, 15 year-old Bryce Bowler caught two cats right in a row fishing – you guessed it – shrimp, both of which his father, Bryce Bowler netted.
Other boys and girls there also landed the prized channel cats on the late spring afternoon. Meanwhile, Richard Muñoz, who became the coordinator of the program in October 2017 after the program’s founding coordinator, Joe Ferreira retired, walked around the lake, sharing fishing tips and stories with anglers and the parents and guardians.
This program, now in its twenty-sixth year in the Sacramento area, is the best and most needed project that the Department has ever initiated, in my opinion.
Created to improve angling opportunities for the growing urban population in the nation’s most populous and most diverse state, much of the success of the program was due to the hard work, persistence and good nature of Joe Ferreira, the coordinator of the Program in Sacramento since it started up at Southside Park in the summer of 1993.
When introduced to Sacramento and Southern California in 1993, novices and veteran anglers welcomed it alike. Up until that time, young anglers generally were introduced to fishing by the parents and guardians, grandparents, other relatives and friends. If you didn’t have parents or friends that were experienced anglers, you were often out of luck.
The program has been offering fishing clinics, free rod and reel rentals and stocking rainbow trout and channel catfish ponds in close to home ponds in the Sacramento and Stockton metropolitan areas for all of those years. The program also serves the San Francisco and Los Angeles metropolitan areas.
“We stock channel catfish in the ponds in the warmer months and rainbow trout in the cooler months,” said Muñoz.
“After our July Free fishing Day, we will be stopping the clinics and plants for six weeks and we will be revamping the structure of the program. We will try to make sure our message still relevant to the diverse audience that we serve,” noted Muñoz.
“We are facing a major budget cuts – after the hiatus we will begin the clinics and plants again. We are looking at a different structure and different message, but the goals and vision of our program will be the same,” said Muñoz.
According to the CDFW website: “The Fishing in the City program was created in 1993 to improve angling opportunities to California’s growing urban population. Consistent with trends across the country, California’s urban 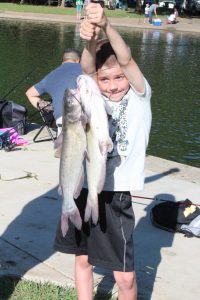 anglers identified a lack of free time as the primary reason why they don’t fish more or stopped altogether. Many city and regional park lakes, ponds, and streams were all but forgotten as potential fishing sites and many lacked adequate facilities, staff, or fish to sustain a fishing program. Some suffered from non-point source pollution and habitat degradation. All were surrounded by communities ready to provide the support necessary to create fishing in the city.”
Before coming to work for the CDFW, Muñoz worked with the state parks department in Hollister for 8-1/2 years.
“It’s been great working for the CDFW in the Fishing in the City program. The challenge is that federal grant money that funded the program is being reduced by 30 percent” he said.
Muñoz said the CDFW is limiting fishing on the ponds to children ranging from 5 to 15 years old during the clinics. “This makes it more comfortable for the kids. It creates a space for then to explore fishing,” said Muñoz. After the clinics are over, adults can fish.
In spite of Department cutbacks and increasing costs of planting fish, the program has endured. Whereas the program used to stock a number of ponds in the Sacramento area with fish every week, the plants have become less frequent, but more fish are put in during the plants.
When I attended the first “Fishing in the City” event at Southside Park in Sacramento in the summer of 1993, I was impressed by the then new program and its mission of actually encouraging young anglers to fish as part of enjoying and appreciating the outdoors and practicing conservation.
Joe Ferreira was there with parks district officials, former City Councilman Jimmy Yee and a bunch of kids and some adults after the first plant of channel catfish in the lakes.
Since that inaugural event, I have attended over 60 of the program’s events, as well as fishing in a few of them. This program is one that actually increases angling opportunities, rather decreasing them or taking them away as California’s population continues to grow.
When I was a kid growing up in Sacramento, I had to figure out how to fish in local waters pretty much on my own. I would often travel to the American River by bike to fish for shad, steelhead and striped bass.
Nowadays, young and novice anglers have good opportunities to learn about fishing from angling experts in clinics, seminars and workshops provided by government agencies, fishing groups and bait and tackle stores, but no program equals “Fishing in the City.” “Fishing in the City” gives city dwellers opportunities to both learn how to fish and to fish close to home. 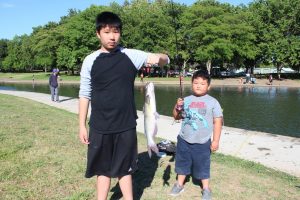 In covering Fishing in the City events, I’ve seen some amazing catches. I’ve seen crappie, huge redear sunfish, brook trout and even brown trout caught at Elk Grove Park.
However, none of the catches I’ve witnessed touches the 22 lb. white catfish that James Robinson of Sacramento pulled out of William Land Park Pond in March 1994. That fish is not only the state record, but also a world record for the species, according to the Freshwater Fishing Fall of Fame.
The last fishing clinic before the program is revamped will be held on Saturday, July 6, at Howe Community Park. It is co-sponsored by the Fulton-El Camino Recreation Park District. The event is for 5-15 year-olds only. No pre-registration is required.
You can find out the schedule for clinics and lakes being planted by calling (916) 358-2872 or going online at: https://www.wildlife.ca.gov/Fishing-in-the-city/SAC.
Bill King, President of the California Striped Bass Association, Sacramento chapter, was helping out at the clinic with other volunteers. He informed me that Cosumnes Community Services District (CSD) Parks and Recreation Department has placed a moratorium on fishing at the lake in Elk Grove Park after waterfowl have been injured or killed by fishing debris left at the park.
The temporary ban is planned for June 3 through November 18 to allow park officials time to gather public input and create a wildlife protection plan. To learn more about the fishing moratorium and wildlife protection plan, visit www.yourcsd.com/wildlife.

Fishing In The City Facts 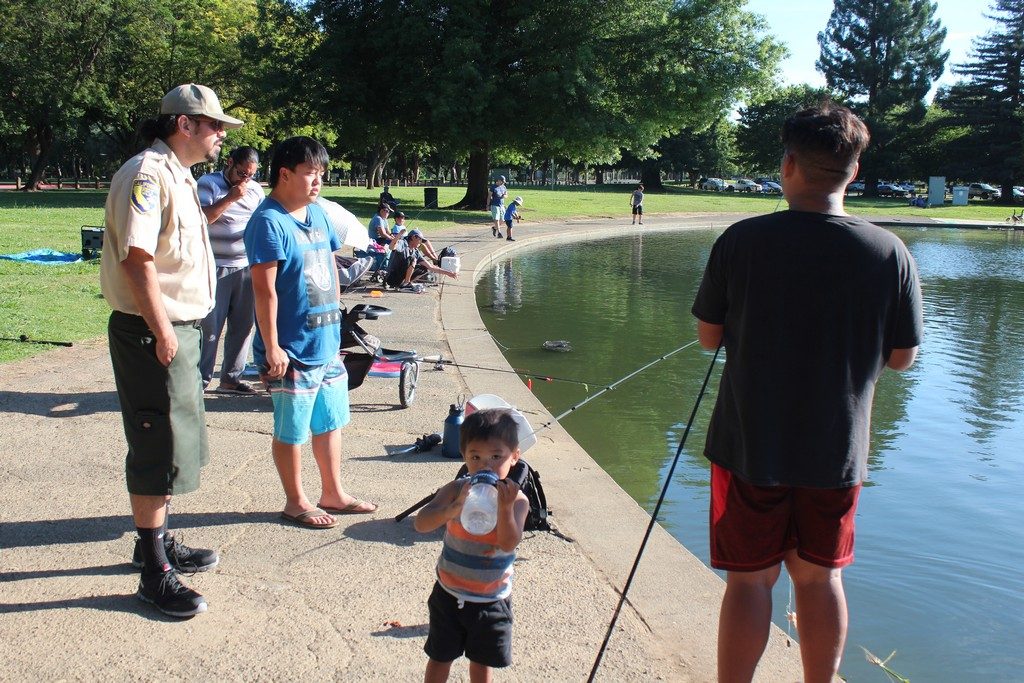 Overview: The CDFW’s Urban Fishing Program serves Californians living in the Sacramento, San Francisco and Los Angeles metropolitan areas.
The program was created in 1993 to improve angling opportunities for California’s growing urban population. Consistent with trends across the country, California’s urban anglers identified a lack of free time as the primary reason why they don’t fish more or stopped altogether.
Many city and regional park lakes, ponds, and streams were all but forgotten as potential fishing sites and many lacked adequate facilities, staff, or fish to sustain a fishing program. Some suffered from non-source-point pollution and habitat degradation. All were surrounded by communities ready to provide the support necessary to create fishing in the city.
The program’s Fishing in the City Clinics gives city dwellers an opportunity to learn how to fish, and to fish close to home. It also gives participants an opportunity to borrow rods, bait and tackle through the Tackle Loaner Program.
Ponds are stocked with trout in winter and catfish the rest of the year. Anglers 16 years of age and older need to have a fishing license except for on Free Fishing Days.
Another outreach program is the Kids in Creeks school-based fishing program in the San Francisco Bay area. In Marin, Alameda and Contra Costa Counties, teachers complete a three-day watershed education program followed by a fishing trip. In Santa Clara County, similar programs are available.
For information about the Sacramento area Fishing in the City Program,, contact (916) 358-2872, https://www.wildlife.ca.gov/Fishing-in-the-city/SAC.
For information about the Fishing in the City program in the San Francisco and South Bay areas, contact Ethan Rotman: Ethan.Rotman@wildlife.ca.gov • (415) 892-0460
For general information about the program, go to: https://www.wildlife.ca.gov/fishing-in-the-city‎