This year has been memorable one for striped bass on the Feather River – and veteran guides and anglers are expecting the fishing to continue until at least mid-June because of the high flows on the river that have drawn large numbers of striped bass into the system, along with the shad.
“This has been a fantastic striper season on the Feather,” said Rob Reimers of Rustic Rob’s Guide Service. “Every trip on the river except for one produced limits of stripers after I started booking trips on March 31. With the fishing the way it is now, I don’t see any reason why it shouldn’t continue into mid-June.”
The striped bass fishing is still going strong on the Feather River, since the high flows have kept the striped bass, including some large ones, in the system.
“On my latest trip, Dr. Maqsd Dean had to be at the hospital, but we did catch him and his six-year-old son their limits before he had to go,” said Rob Reimers of Rustic Rob’s Guide Service. “They landed stripers in the 19 to 22-inch range while fishing extra-large minnows out of Boyd’s Pump. “ 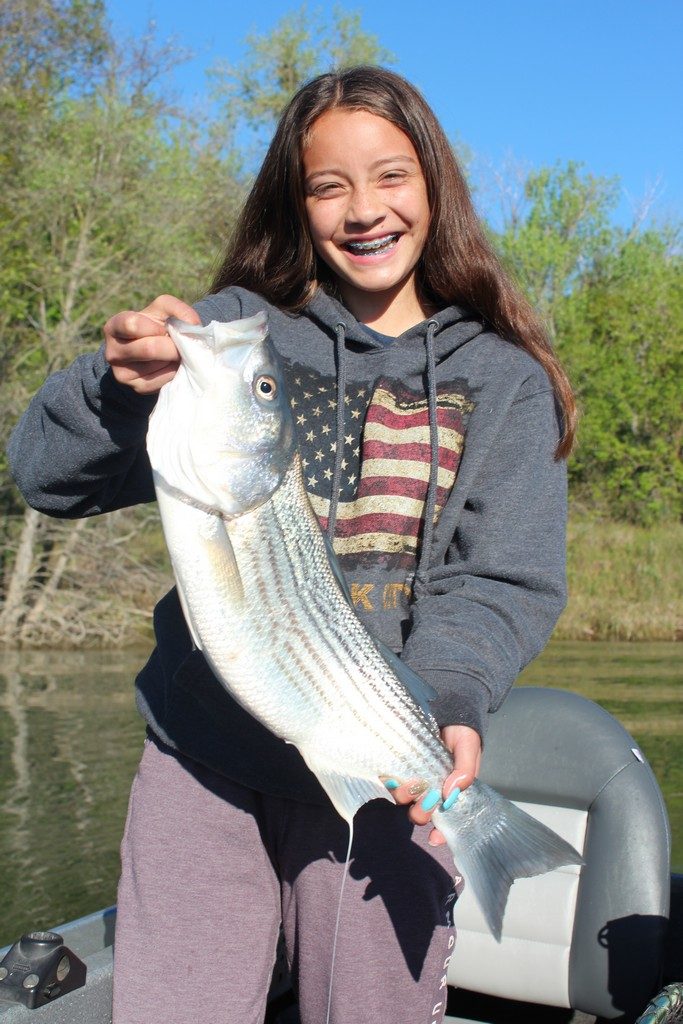 The anglers also released a 14 lb. king salmon that put up a great fight before they got the hook out of it.
On a previous trip, Dan Instrom and Tom Muller of Woodland caught and released two fish in the 12 to 15-pound range. “The three of us kept our limits of 19 to 24-inch fish while drifting minnows out of Boyd’s pump. Altogether, including shakers, we must have caught over 22 fish.”
Another trip made by Reimers and his friend Bob produced limits of stripers in the 20 to 26-inch range. They also released two 10 lb. stripers on the Feather.
The striped bass, known for its willingness to take a wide array of baits, lures and flies and its hard, dogged battle, is one of my favorite fish to pursue. I can attest to the fine fishing on the river, having hit the river with Ernie Marlan, Fish Sniffer staffer, his 17-year-old son, Andrew, daughter, 13-year-old Abby, out of Boyd’s Pump in Yuba City with Rob Reimers in mid-April.
On the day before, Reimers and two anglers reported limits of fish weighing up to 8 pounds. “We caught our fish, but we had to go through a lot of shakers to do it and we were done around 1 p.m.,” he said.
The action was even better on the morning we fished. After we arrived in the boat at Star Bend, Reimers told us each to a grab a minnow from the bucket, put the hook through its “nose,” and to let out the line out so the minnow and sinker would gently tap the bottom. 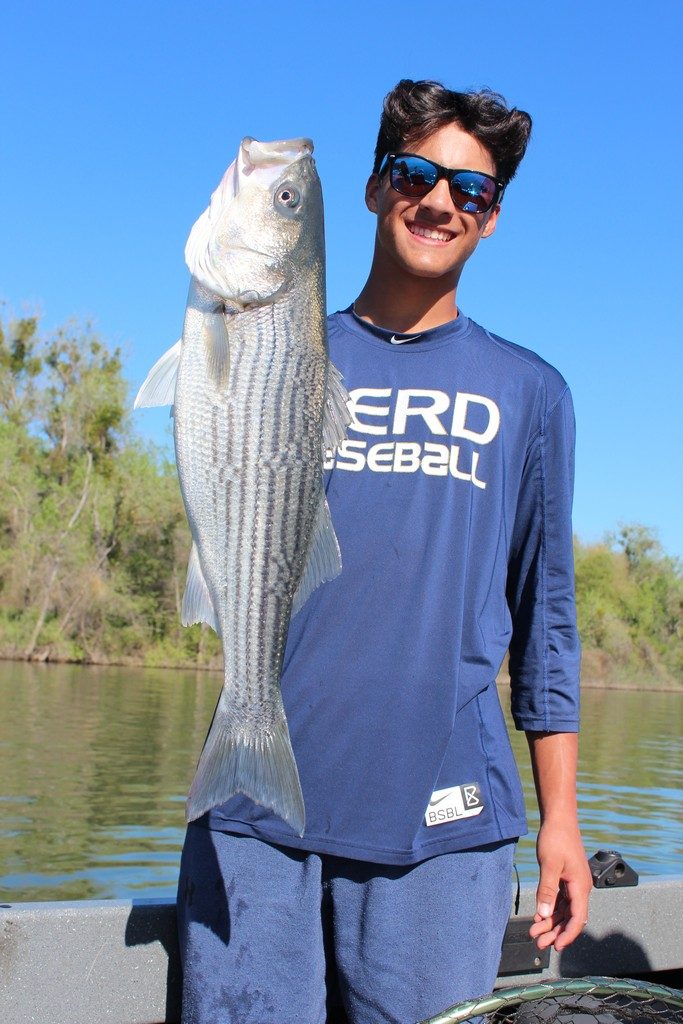 The day started off with plenty of action, with Ernie’s two children successfully batting several legal-sized stripers.
We hit one spot where the fish were absolutely stacked on the fish finder. Unfortunately, once we started hooking up one fish after another, other boats converged at the spot, spooking the fish and making the bite much tougher.
Rob drove the boat downriver, ending up below the Nicolas Bridge. “We didn’t get a lot of fish down here yesterday, but the fish we landed were quality ones,” he stated.
We went upriver to the Star Bend area, – and that’s where Andrew landed the biggest fish of the day, a 9-pound male. All of the fish we landed were males, typical for this time of year.
The five of us were limited out with our ten stripers by 10 a.m. We released at least a dozen shakers and lost some fish also.
After the striped bass and shad fishing slows down, anglers will have another species to fish for on the Feather River – the prized chinook salmon. Anglers can look to a much-improved Central Valley season this year due to the higher numbers of fish projected in the Feather, Sacramento, American and Mokelumne rivers.
The California Fish and Game Commission voted to approve salmon seasons and bag and possession limits on the Sacramento and Klamath/Trinity river systems at its teleconference meeting in Sacramento.
A projected return of 379,600 spawning Sacramento River fall-run Chinook Salmon to Central Valley rivers has allowed fishery managers to return to a two salmon daily limit with four salmon in possession, according to the California Department of Fish and Wildlife (CDFW). Last year, due to forecasted lower salmon returns, anglers fishing the Feather, American and Sacramento rivers were only allowed a one fish bag limit with two fish in possession.

The Commission also extended fishing in the Feather River an additional two weeks, closing on October 31.
The Feather River many years contributes the most salmon that return to the Sacramento River Basin. In 2018, the Feather River Basin, including the Yuba River, supplied 52 percent – 76,209 -of the total fall run chinooks returning to the Sacramento River, including 48,882 to natural area fish and 27,327 hatchery fish. The 76,209 included 61,783 adults and 14,426 jacks (two-year olds).
Reimers and other guides will be fishing the Feather River on the opener. “Last year my clients caught 120 fish during the season,” he said. “I concentrated on the Aftrbay earlier in the season and concentrated on fishing in the Yuba City later in the season.”
Some years the fishing is so good on the Feather River that the guides will do afternoon trips for salmon also. For example, after five anglers and I limited out while fishing the Feather below the Thermalito Aftrebay outlet with Robert Weese of Northern California Guide Service in a trip in 2016, we got in before noon with limits of good-sized salmon and two anglers went out on an afternoon trip with Weese. The couple limited out on salmon also.
Boaters use an array of techiniques on the Feather, including side drifting with roe, boon doggling with roe and anchor fishing and back trolling with Brad’s Killer Fish, Cut Plugs and other lures. Other anglers jjig with Gibbs Minnows, P-Line Lazer Minnows and other spoons. 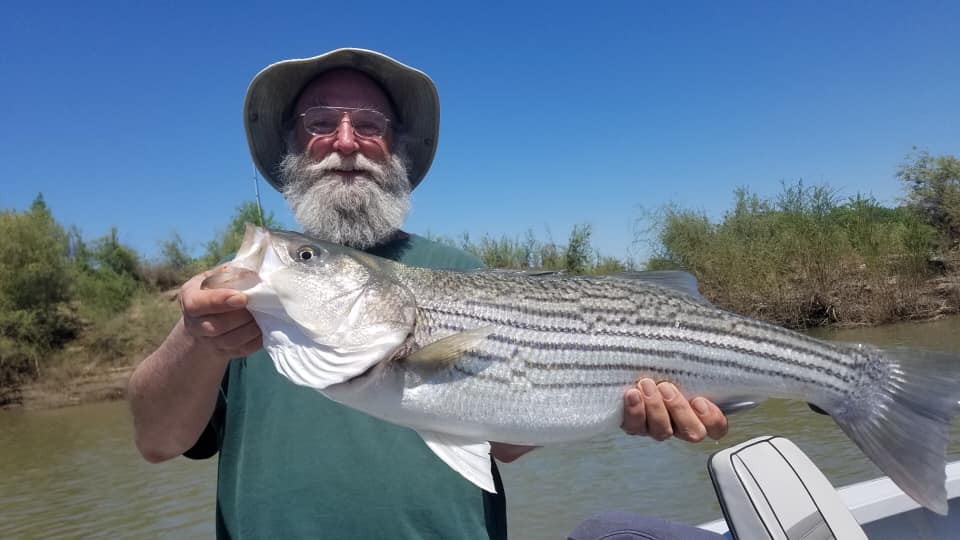 Shore anglers find the best action while tossing out Mepps Flying C and Blue Fox spinners, casting spoons and drifting salmon roe.
In addition to salmon, the Feather also has a great steelhead population. The hatchery trapped a total of 1,049 males and 839 females this year, 1988 steelhead total. The total eggs they collected is 1.1 million, more than enough to meet their production of 450,000 steelhead smolts for the Feather River. They also had enough eggs to stock the Thermalito Afterbay with over 10,000 steelhead.
In addition, the hatchery also released steelhead kelts (spawned out adult males) into the Sacramento at Verona and into the Thermalito Afterbay, with 50 percent of the fish going into each spot.
But stripers, salmon and steelhead are not the only fish found in the Feather. The river also hosts smallmouth bass, spotted bass (we caught one during our recent striper trip, channel catfish, American shad, and in high water years, white sturgeon. 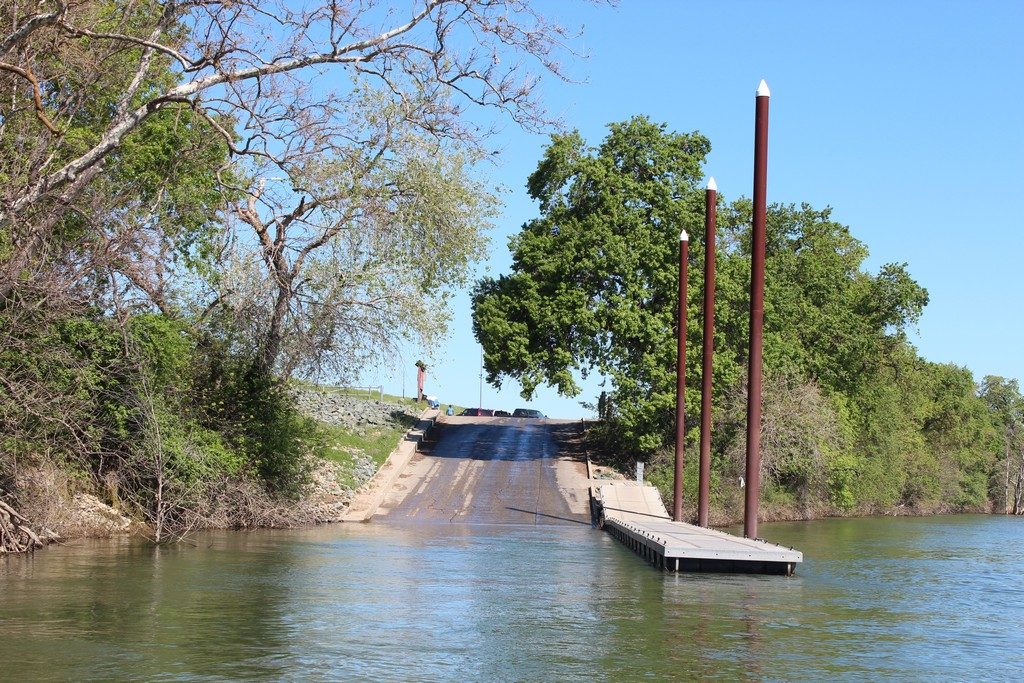 Location: The lower Feather River, the principal tributary of the Sacramento River, runs from below Oroville Dam to its junction with the Feather River at Verona. The river’s main stem is about 71 miles long. This river from Yuba City/Marysville to Verona is characterized by riffles, sandbars, long flats and some deep holes.
Seasons: The salmon season is open from July 16 through December 16 in the section from 200 yards above Live Oak boat ramp to the mouth. Fishing for steelhead, striped bass, smallmouth bass, largemouth bass, channel catfish and other fish species is open year-round.
Boat ramps: Public launching is available at the Yuba City boat ramp, Riverfront Park in Marysville, Star Bend in Marysville, Boyd’s Pump and the Verona Marina. For more information about boat launching or camping at the Verona Marina, call 916-927-8387.
Fishing Guides: Guides are available for king salmon, striped bass, steelhead and shad fishing during the different seasons. Guides include Robert Weese of R Robert Weese of Northern California Guide Service, 530-755-7196, norcalsalmonguide.com; Rustic Rob of Rustic Rob’s Guide Service, 530-632-0051; Bret Brady of Bare Bones Guide Service 530-272-7137 or 530-263-4451, Manuel Saldana, Jr. of MSJ Fishing Guide Service, 530-301-7455, James Netzel of Tight Lines Guide Service, 888-975-0990; and Kevin Brock of Kevin Brock’s Guide Service 800-995-5543.