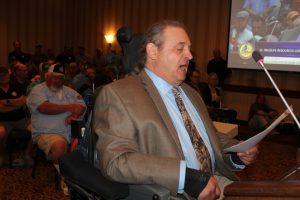 At its June meeting in Redding, the California Fish and Game Commission voted to move the proposed policy on Sacramento-San Joaquin Delta fisheries management from the Wildlife Resources Committee to the full Commission at their August 7 meeting in Sacramento for further review and potential changes.

Scores of anglers throughout the state attended this meeting to oppose the proposed repeal of 1996 Striped Bass Policy and adoption of the new Delta Fisheries Management Policy . The water contractors and their Astroturf groups, including the Coalition for a Sustainable Delta, the Astroturf group created by Beverly Hills agribusiness tycoons Lynda and Stewart Resnick, have for years tried to increase bag limits and decrease the size limits for striped bass, even though both species thrived together for over 130 years and both species are victims of massive water exports out of the Delta. The anglers and their allies have defeated these attempts to reduced numbers of striped bass every time.

Anglers fear that the repeal of the striped bass policy and adoption of the new policy would result in weakening protections for striped bass and other introduced fish species.

By decreasing striped bass populations, the state would increase populations of predatory Sacramento pike minnows and introduced silversides that the striped bass feed upon, disrupting the current predator prey relationships and likely causing even more harm to salmon, Delta smelt and other fish populations.

“The new Delta Fisheries Policy calls for strict protections for salmonids and listed fish only,” according to the action alert from the NorCal Guide and Sportsman’s Association, the group that organized buses and carpools throughout Northern California to go the meeting. “This is the first step for removal and destruction of our delta bass fisheries and more! If repealed and adopted it will allow the commission to direct the department towards INCREASED bag limits and REDUCED size restrictions!

After one angler after another spoke, the Commission voted to move the policy recommendation forward to a full Commission discussion on August 7.

During the meeting, people from all over Northern California, the Delta region and the Central Valley to speak against the policy.

“I am a Fisheries Research Scientist, founder & former director of the Pathobiology, Conservation & Population Biology Laboratory at UC Davis,” he testified.

“I have reviewed the proposal to repeal the 1996 Striped Bass Management Policy and adopt the new Delta Fisheries Management Policy,” he stated. “These fisheries management policy changes would adversely affect striped bass and black bass and the estuaries fragile ecosystem. There is absolutely no new credible scientific evidence that should alter the last Fish and Game Commission’s ruling on this subject.”

“Striped bass feed on several other delta species including non-native inland silversides and native pike minnow. Reducing striped bass numbers would for example increase the population of inland silversides and pike minnows. The inland silverside is a highly invasive introduced species that has supplanted the ecological niche of the delta smelt, it feeds on delta smelt eggs and larvae and it competes for the same food sources as juvenile salmon. The pike minnow is one of the most voracious predators on juvenile salmon and other small native fish. An increase of its population would have a deleterious effect on listed species and the ecosystem,” he said.

Chris Smith, captain of the Pacific Queen in Berkeley, said, “I’m a second generation charter boat skipper and my son, Jonathan, follows in my footsteps. The change in policy would have an enormous impact on our industry.”

Noelle Kremers, Senior Policy Advocate for the California Farm Bureau, said she supports the new policy. “We see the need to improve management of the Delta and see this as one of the ways to do this.,” she said.

After the public comment period, Commissioner Samantha Murray told the crowd as she thanked them for coming to the meeting, “We hear you. We see you,”

The Commissioners explained that in their review of that policy, they would consider the anglers’ concerns about lost striped bass fishing opportunity on the Delta.

Commission President Eric Sklar emphasized that the 1996 striped bass policy had four provisions, including to “increase striped bass abundance consistent with the Endangered Species Act,” and said the commission had no plan to “eradicate striped bass.”

“I see no words in the revised policy where the Commission is making a statement about voiding this policy,” he said.

Sklar also noted that the “approach to predation is that it needs to be surgical, not a hammer.”

A total of 125 anglers and their allies showed up for the meeting and 60 of them spoke against the proposed new policy. Only a couple of people, both representing agribusiness groups, spoke on behalf of the policy.

“We are very happy with the number of people who showed up at the meeting,” said James Stone, President of the NorCal Guides and Sportsmen’s  Association. “However, we can’t stress the importance of showing up and voicing your opinion to the Commission at their meeting on August 7.”

The Commission meeting will take place on August 7 at 8:30 a.m. at the Natural Resources Building Auditorium, First Floor, 1416 Ninth Street, Sacramento, CA 95814. Everybody who cares about the future of Central Valley and San Francisco Bay Delta fish populations should be there!

The Commission voted 3-1 to accept a petition to list four species of bumble bees for protection under the California Endangered Species Act (CESA), according to a press release from the California Fish and Game Commission. The action begins a one-year status review of the species and following that review, the Commission will make a final decision at a future meeting. During the status review, the bee species have protections under CESA as a candidate species. Commissioner Burns was the dissenting vote.