There is something special about ocean salmon fishing. When there are salmon lurking beyond the Golden Gate, you can feel the electricity in the air at Bay Area ports and saltwater enthusiasts have a spring in their step that just isn’t there when salmon are missing in action. 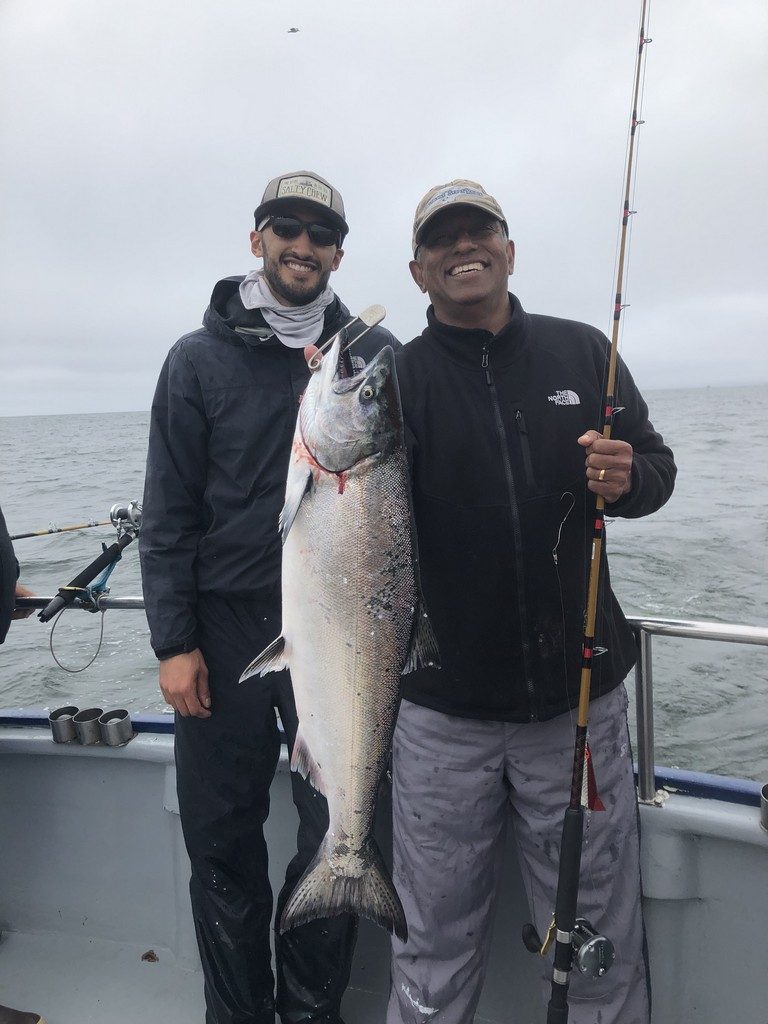 I’m happy to report that big numbers of salmon are on the feed outside the Golden Gate and it seems like more fish are arriving all the time. The fishing has been good to very good since the spring opener and I’ve been chomping at the bit to get out. It finally happened a few days ago when I jumped aboard the New Easy Rider with Captain Joey Gallia and his crack deckhands, Cooper and A.K.
I’ve been fishing with Joey for nearly 15 years and I can attest that he is one of the best salmon skippers in the game. If there are kings to be caught, Joey will put you in a position to put them into the box!
The bite had been very good in the days preceding my trip with limits and near limits being the rule on fish pushing up to and beyond 20 pounds, so I was pretty excited when we cleared the dock, passed the Berkeley Marina break water and started across the bay.
I was expecting to see a bunch of salmon caught, but you’ve always got some butterflies of doubt in your stomach when it comes to salmon fishing. Even when salmon are around in abundance, there is always the chance that you’ll head out on that one day of the month when the fish decide not to bite for some strange reason.
I knew that we were in for a 90 minute to two-hour cruise to get to the fish, so I settled into a seat and was asleep by the time we reached Alcatraz. I felt the swells generated by tide action when we passed the Golden Gate but I didn’t open my eyes and was quickly back to snoozing. 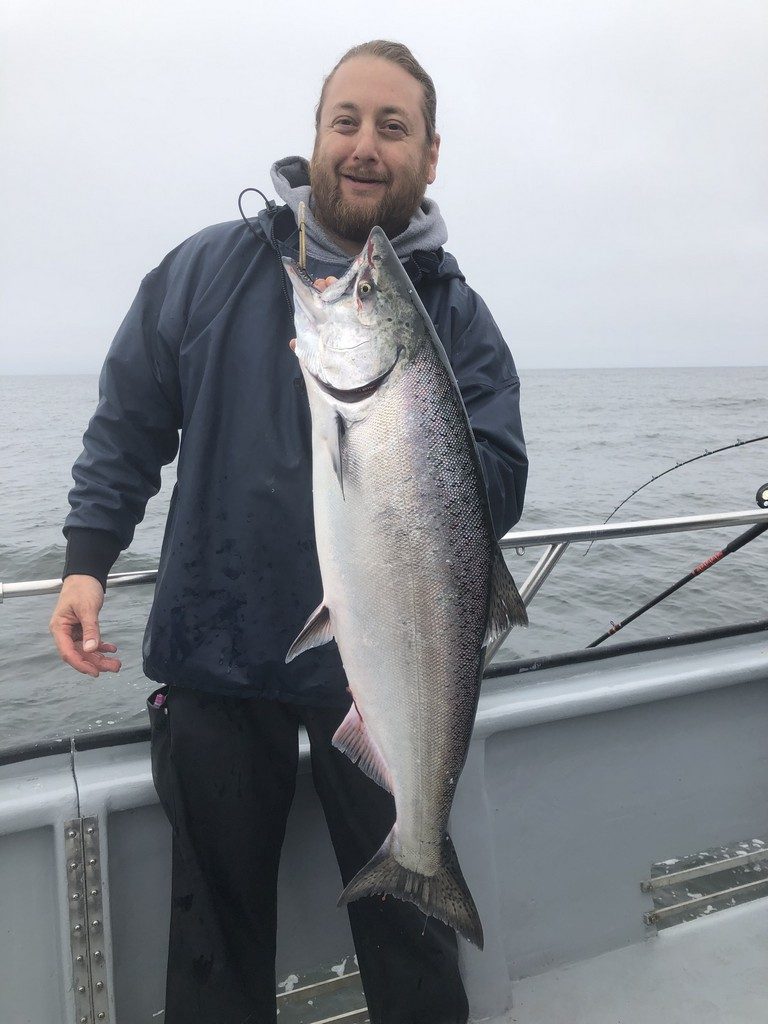 The next thing I knew, Joey was backing off the throttle. We’d arrived on the salmon grounds someplace beyond the North Bar and a few miles offshore of Point Reyes.
Moments later the decks were a flurry of activity as anglers snapped on 2.5 pound weights and attached rigged anchovies to their leaders. The deckhands were right there to help out and get all of us dialed in.
10 minutes later we had our first hookup and a few minutes after that I shot video of a dandy 9 pounder coming over the rail. That fish was quickly followed by a second fish that looked to be over 10.
I’d barely snapped the lens cover on the video camera closed and returned to my rod half way up the port side when the big Ugly Stik got slammed.
I yelled fish on, A.K. got the rod to the back of the boat and the next thing I knew I was fighting a struggling king. I kept the line tight, followed A.K.’s instructions and was rewarded with a chrome bright 9 pounder of my own.
Truth be told I didn’t care if I caught another salmon. I’d come to get a story, shoot video and secure a fresh salmon dinner…done, done and done, but the fish gods weren’t finished smiling on me just yet.
As soon as I attached a new bait and stripped it down to 30 feet, I hooked up again. I shot down the rail as fast as I could and fought the fish across the back of the boat. It felt bigger and stronger than my first fish and it was, weighing about 14 pounds. I was super excited! 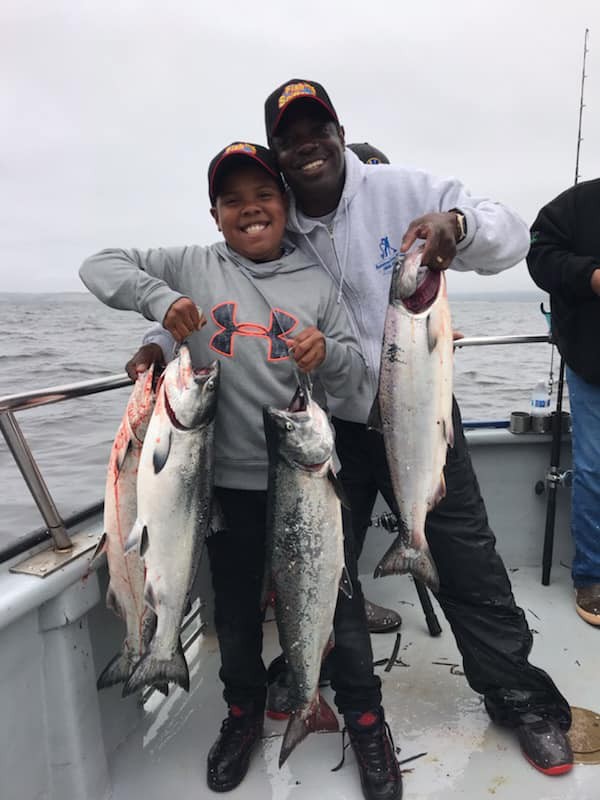 As the morning went on the bite never stopped, we would go through a 10 or 15-minute dry spell without a hook up, but we’d make up for it with a flurry of 4 or 5 hook ups back to back to back. We also had some hot streaks when we’d put several fish into the boat at once and there were multiple kings flopping on the deck, lots of yelling, laughing and big smiles!
We got a few small salmon, but not many. The average fish was about 8 pounds, nice fish were 10 to 12 pounds and our largest fish looked to be about 20 pounds. The fishing was epic and the crew was impressive. In all we landed 60 salmon in 5 hours of fishing time for full limits and we only lost a sum total of about 12 fish.
That quite a feat and a testament to the skill of the crew. There is nothing easy about landing big hard fighting salmon from a moving boat with multiple lines in the way while using single barbless hooks, but Cooper and A.K. made it look simple….Just another day in the office aboard the New Easy Rider.
If you haven’t taken a trip aboard the New Easy Rider, I strongly encourage you to jump aboard and get your salmon on. Captain Joey and A.K. are stoic and professional, while Cooper or “Coop” as we call him is emotional, hilarious and a ton of fun to chat and smack talk with!
Book your spot by calling (707) 422-2050.