On Saturday, June 1, I made the early morning drive from my home in Foresthill, Ca to Stampede Reservoir near Truckee to attend a fishing event with an organization call, Purple Heart Anglers.
I got the invite from Marc Christophel of Christophel’s Guide Service. Marc is on the Mack’s Lure pro staff and guides on both Donner Lake and Stampede Reservoir.
Marc works closely with the Purple Heart Anglers and is good friend with Randy Houston, the organizations founder. When he told me that we’d be fishing with Mr. Houston I was pretty excited. I knew the kokanee bite at Stampede was going strong and I looked forward to learning more about Purple Heart Anglers.
Marc wanted me to be at the lake by 5:30. I rolled in about a half hour early and snoozed in my truck until Marc and the other guides started arriving.
The weather was clear and warm down in the foothills, but on the east side of the Sierra summit dawn broke through a heavy mantle of fog. The fog was so thick that it felt more like we were gearing up for an ocean salmon trip rather than a high mountain kokanee hunt. 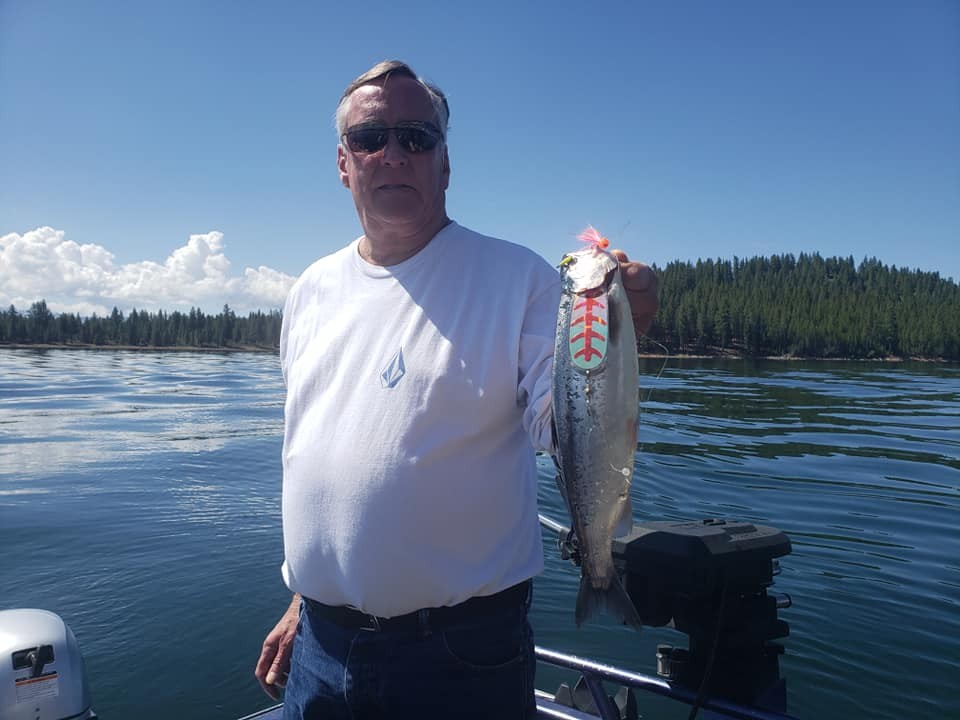 By 6 o’clock all the guides, Randy Houston and a dozen decorated vets had arrived and it was time to hit the water. Mr. Houston and I jumped about Marc’s beautiful North River and off the launch ramp we went.
A short while later and we were motoring off into the fog, watching out for other boats and observing scattered pods of kokanee on the sonar unit.
When we stopped I started peppering Mr. Houston about Purple Heart Anglers as Marc armed several rods with Mack’s Lure Sling Blades, Double D dodgers, Kok-A-Nuts and hoochies.
Mr. Houston, isn’t a veteran but his now deceased brother Jerry was and it was Jerry’s experience that inspired Randy to found Purple Heart Anglers back in 2009.
Randy Houston is typical of the guys I’ve met over the years that run successful non-profit organizations. He is outgoing, driven and has a very Type A personality.
“Addiction on post-traumatic stress disorder are widespread among the veteran community ,” said Houston. “What we seek to do it to get the vets out of their day to day routine and get them out on the water for a fishing trip or out into the field for a hunt. Over the years we’ve taken more than 1,000 veterans on trips. Some of the trips are local but sometime we travel as far away as Alaska or Costa Rica. Locally we host events at places like Stampede, Camache, Berryessa, Donner, Eagle and the California Delta.”
Almost as soon as Marc started dropping the downriggers down we started getting hit, some of the fish stuck some of them didn’t. It didn’t take long to determine that the hot set up for the day was a pink UV Sling Blade teamed with a pink Kok-A-Nut.
Some of the salmon we reeled up were little guys that we shook behind the boat, but there were enough quality fish in the 13 to 15 inch class to keep things interesting.
Mr. Houston turned out to be an epic smack talker and I can hold my own so we had a good time. About half way through the morning we pulled to the shore to let Randy off the boat as he had another Purple Heart Anglers event to attend.
Marc and I spent another hour or so on the water. When the fog gave way to sun and a stiff breeze kicked in we headed for the ramp, got the boat on the trailer and headed for the Purple Heart Anglers BBQ in the overflow parking lot.
I opted to pass on the BBQ a bid Marc farewell once we got his boat parked in the shade.
Marc is a top notch guide and I look forward to hitting the water with him in the future. He is a true gentleman and lots of fun to fish with. If you’d like to chase kokanee or mack in the Truckee area I can highly recommend Marc. He can be reached at (530) 680-1492 or you can check out his guide service online at www.truckeefishingguide.com.