On Friday, July 5, the second Golden Gate Salmon Association (GGSA) “Fish Like a Girl” all ladies salmon fishing trip aboard the Salty Lady departed from the Sausalito Harbor to fish outside of the Golden Gate.
“We traveled out to the W Buoy, a long run from the harbor,” said Cat Kaiser, the GGSA Fundraising and Events Coordinator. “The weather was choppy, very typical of salmon fishing conditions. It was cloudy and foggy in the morning and then calmed down in the afternoon. Even though was It was a far run, only a couple of the girls got sick – and they were not down for long.”
By the end of the day, the 21 ladies and the three crew members aboard the boat had caught limits of quality Chinook salmon, a total of 48 fish.
“To say these ladies had fun catching full limits of big salmon on the trip would be an understatement,” said Kaiser. “For some, it was about catching their first salmon. For others, it was about doing what they love with 21 fellow fisherwomen. For all, it was a day of supporting, cheering, laughing and catching.” 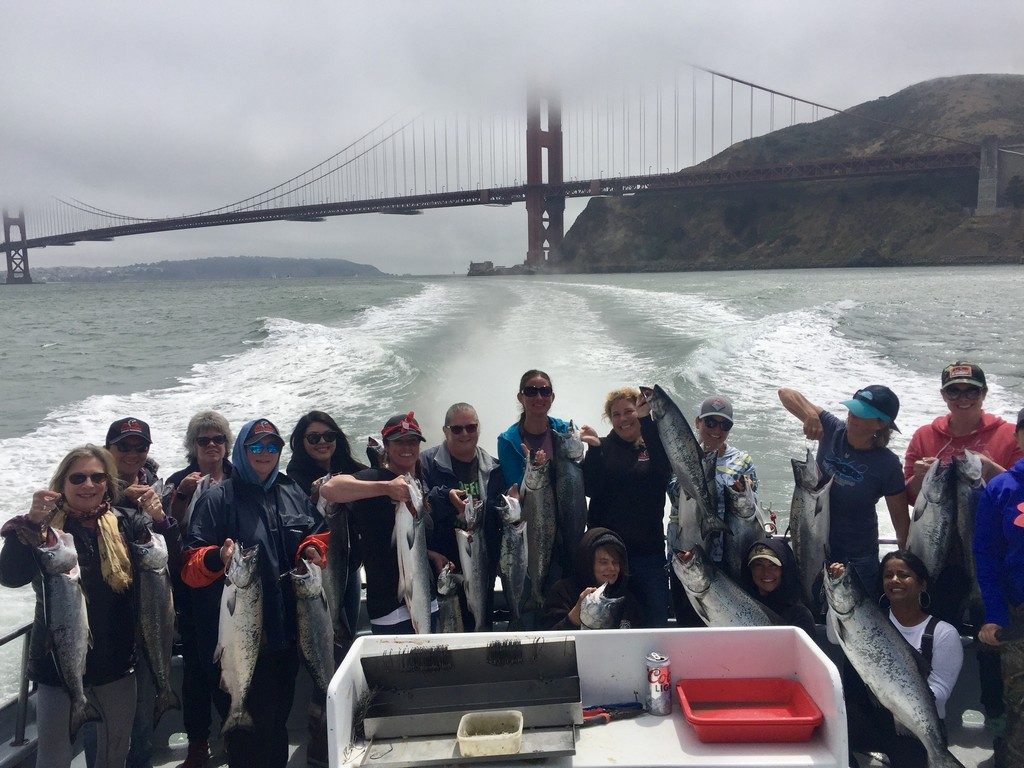 The fish averaged a solid 12 pounds each and lot of Chinooks in the 18-pound class were landed. Kaiser won the jackpot with a 25-pound king.
They landed the fish while trolling anchovies anywhere from 30 to 80 feet pulls deep.
“All of the girls become best friends at the end of day,” said Kaiser. “The support and camaraderie among the women was unbelievable. They were hooting, hollering, laughing and cheering for each other for every fish that came over the rail. There were lots of hugs on this trip.”
Salty Lady Captain Jared Davis ran the boat and Tommy Watson and Jimmy McNair served as deckhands.
“The crew was wonderful, helpful and made sure that every girl ended up with fish. By end of the day, the women who had already landed salmon gave their rods to the women who hadn’t caught fish,” she noted.
In addition to the excellent fishing, the anglers and crew enjoyed seeing the plentiful humpback whales cavorting on the water.
“These women were out to fish and the friendship that came along with it was a bonus,” said Kaiser. “It was such a blast that our second trip on August 16 was sold out in minutes. Every girl caught good quality fish.”
Kaiser emphasized, “Women are so aware and supportive of each other when they fish.”
This was not the only trip salmon trip that the Golden Gate Salmon Association (GGSA) organized lately. The GGSA helped to share the love of the late Roger Thomas by launching a fund Thomas left to get more kids out fishing. 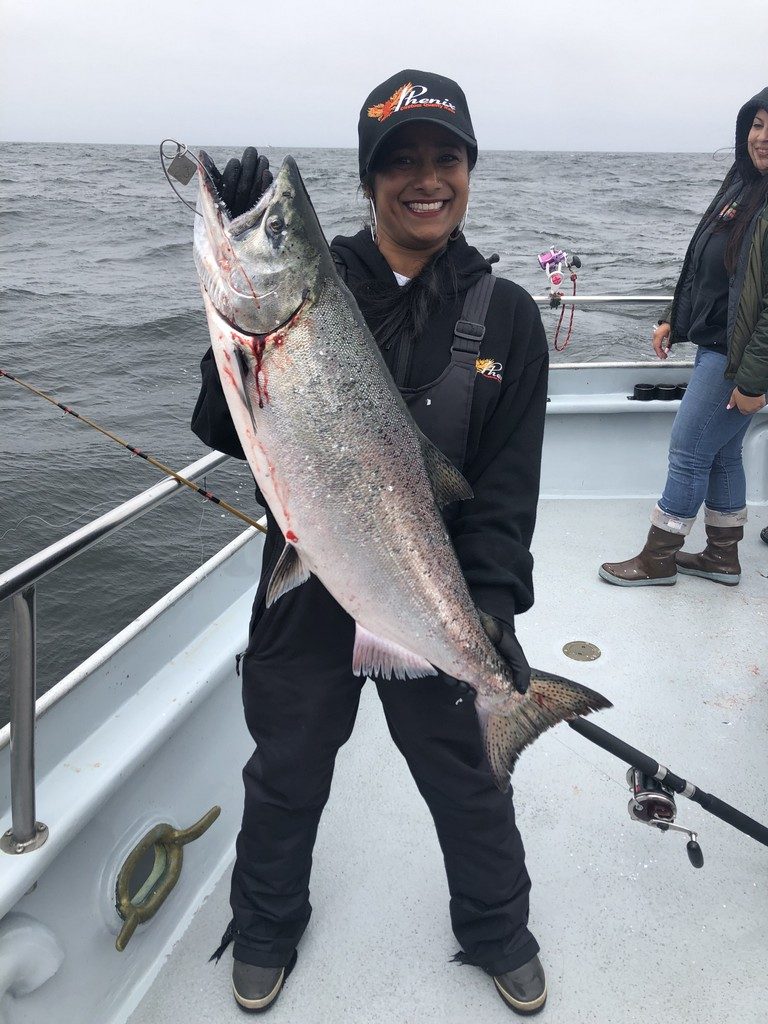 GGSA partnered with the San Mateo Police Activities League (SMPAL) to fund a fishing trip for 15 kids aboard Roger’s old boat, the Salty Lady, now run by Capt. Jared Davis.
Roger Thomas was a founding member of GGSA and its chairman until his passing in January 2018.
“A good time was had by all and Roger seemed to be proudly smiling down on all of us,” said Captain Davis. “Getting these kids out fishing, and the fun they have, is what it’s all about.”
The day started at 5:30 am with giggling young girls sharing pastries in a corner of the boat’s house while others tried to catch up on their sleep. Shortly after, all eyes were seaward as the boat cruised under the Golden Gate Bridge.
“Some of the kids were more cautious and concerned about how the day was going to play out while others keyed off the older boys, who grew up in the PAL program, and were along to help chaperone,” said GGSA president, John McManus.
The boat first took a wide swing to the south to check spots on the San Mateo coast but eventually ran north to find fish off the Marin County coast. Feeding whales marked the bait and gave the kids quite the show. In no time, the fishing turned on and the kids took turns, quickly picking up limits and extras for the adults on board.
“Some of these kids have never been on a boat or caught a fish. Most of them certainly haven’t come home with fish the size of the ones we got today, they will be heroes to their families for a while,” said retired police officer and SMPAL volunteer Paul Jung. 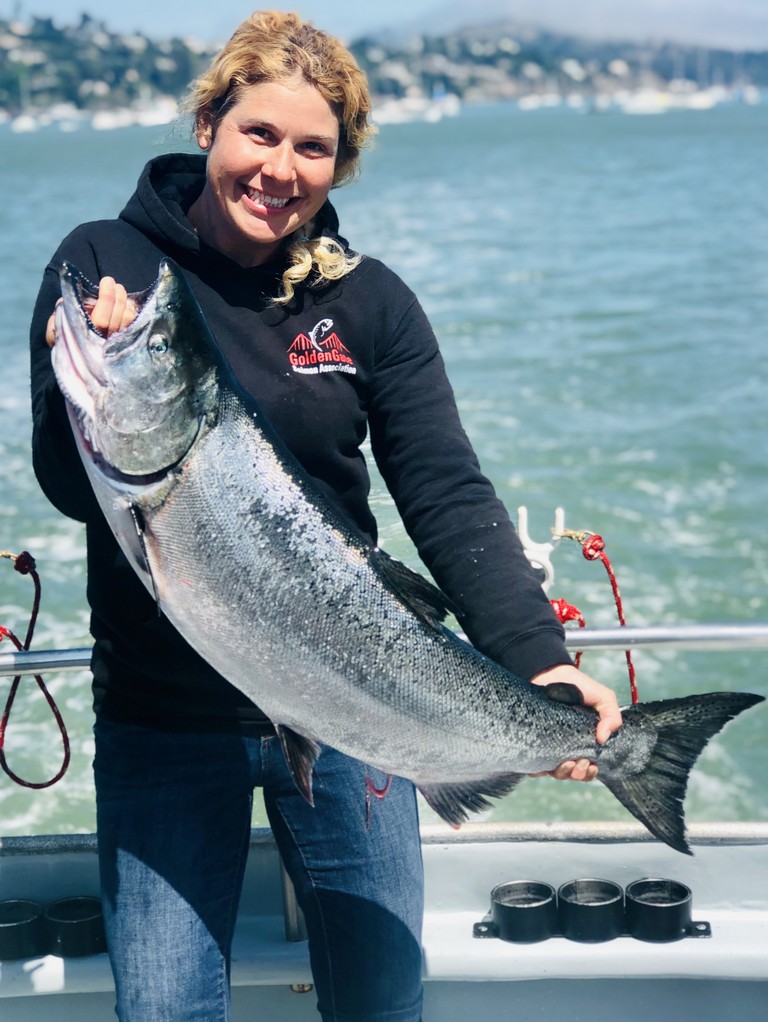 “The retired police officers and chaperones at SMPAL, GGSA, and the Salty Lady crew showed these kids a day on the water they will never forget, and hopefully a lot of fresh salmon dinners in their future,” said McManus. “We’re grateful to Roger Thomas’s foresight in creating this opportunity to introduce kids to the wonders of salmon fishing off our beautiful coast. We expect to do a lot more of these trips to fulfill one of Roger’s last wishes and we also want to thank all of those who helped get this fund and program up and running.”
The Golden Gate Salmon Association (www.goldengatesalmon.org) is a coalition of salmon advocates that includes commercial and recreational salmon fisherman, businesses, restaurants, a native tribe, environmentalists, elected officials, families and communities that rely on salmon. GGSA’s mission is to restore California salmon for their economic, recreational, commercial, environmental, cultural and health values.
Currently, California’s salmon industry is valued at $1.4 billion in economic activity annually and about half that much in economic activity and jobs again in Oregon in a normal season. The industry employs tens of thousands of people from Santa Barbara to northern Oregon. This is a huge economic bloc made up of commercial fishermen, recreational fishermen (fresh and salt water), fish processors, marinas, coastal communities, equipment manufacturers, the hotel and food industry, tribes, and the salmon fishing industry at large.