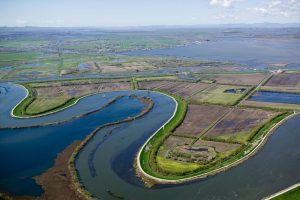 The Department of Water Resources on July 9 announced the beginning of the “public process” to negotiate proposed amendments to the State Water Project water supply contracts for a new Delta Conveyance facility, AKA Delta Tunnel.

The Gavin Newsom Administration, after deciding to no longer support Governor Jerry Brown’s Twin Tunnels project, is forging ahead with a one Delta Tunnel proposal as part of Newsom’s Water Portfolio program.

“The Department of Water Resources (DWR) and the State Water Project (SWP) Contractors plan to begin a public process to negotiate proposed amendments to the SWP water supply contracts for a new Delta Conveyance facility,” according to DWR. “The announcement for the first negotiation session, which is scheduled for July 24, 2019 at 10:00 a.m. at the DoubleTree by Hilton Hotel, 2001 Point W Way, Sacramento, CA 95818 can be accessed here.”

Public parking is available onsite for a fee of $10.

Members of the public also may participate via conference call:

Here are the agenda, ground rules and webinar/remote listening information for tomorrow’s public meeting regarding the State Water Contract Amendment for the Delta Tunnel project from the Department of Water Resources:

The draft agenda for the SWP Contract Amendment for Delta Conveyance meeting on Wednesday, July 24th is here: Click here for the agenda and ground rules document.

The meeting will be held at the DoubleTree by Hilton Hotel, 2001 Point West Way, Sacramento, CA 95818 starting at 10:00 a.m. Parking will be validated. Attendees need to pull a ticket and bring it with them to the meeting for validation.

The meeting rooms at the DoubleTree will be as follows:

There is a webinar option, which can be accessed via the following link: http://kearnswest.adobeconnect.com/deltaconveyance/. You do not need a user name or password to join the meeting. Please select the guest option, type in your first and last name, and then click the “Enter Room” button. A new window or tab should open with the meeting room. Please note that the webinar will not include audio and you will need to dial into the conference line via telephone to hear the meeting (Phone Line: 719-359-4032; Access Code: 474346#)

Here are the ground rules for Public Comment:a. The comment period is designed for input and not for exchanges with the negotiators, therefore the negotiators will listen to comments without responding.b. Please focus comments on the topics covered in today’s negotiation session.c. Members of the public present in person and interested in speaking will have3 minutes or less depending on the number of people wanting to provide public comment. The time available for each speaker will be determined at the beginning of the public comment period.

People concerned about the Delta ecosystem, environmental justice and the future of West Coast fisheries should attend this negotiation session.

The Delta Tunnel as part of water portfolio is nothing new

The concept of the tunnel as part of an overall water portfolio being promoted by Newsom is nothing new. For example, Nancy Vogel, the director of the Governor’s Water Portfolio Program at the California Natural Resources Agency, promoted the Delta Tunnels as part of “California’s overall water portfolio” back in 2014 when she was the assistant director of public affairs at the Department of Water Resources.

In an April 4, 2014 letter to the Chico Enterprise Record responding to an editorial regarding Sites Reservoir, Vogel stated, “As the assistant director of public affairs at the Department of Water Resources, I think it’s important to reiterate that a Bay-Delta Conservation Plan is just one part of California’s overall water portfolio, aimed at complementing existing and planned efforts to manage the state’s water needs in the face of climate change and growth.” (https://www.chicoer.com/2014/04/05/letter-delta-tunnels-are-just-one-part-of-water-solution/)

Newsom’s support of one tunnel to divert water from the Delta to corporate agribusiness and Southern California water agencies is no surprise. Newsom received a total of  $637,398 from agribusiness in his 2018 campaign for Governor, including $116,800 from Beverly Hills agribusiness billionaires Linda and Stewart Resnick, the owners of the Wonderful Company two of the strongest supporters of the Delta Tunnel and promoters of numerous attacks on environmental protections for salmon and other fish species.

Could those contributions have influenced Newsom’s decision to not reappoint Felicia Marcus as Chair of the State Water Resources Control Board, his decision to appoint Mike Lyons as a special new “Agricultural Liaison” to the Governor’s Office, his decision to support Big Ag’s voluntary agreements or his decision to go ahead with a one tunnel plan?

For more information, go to: votesmart.org/…

The Revolving Door: From the Resources Legacy Fund to Newsom’s Water Portfolio Program

Vogel’s recent career is very typical of the revolving door between government agencies and private corporations and NGOs — and the links between environmental processes — that characterize California politics. Prior to Vogel’s appointment by Newsom, she served as director of communications at the controversial Resources Legacy Fund since 2017.

The Resources Legacy Fund Foundation was the funder of the Marine Life Protection Act (MLPA) Initiative to create faux “marine protected areas” in California. Catherine Reheis-Boyd, President of the Western States Petroleum Association, chaired the MLPA Blue Ribbon Task Force to craft  “marine protected areas” in Southern California at the very same time that she was promoting the expansion of offshore drilling in the same region that she was entrusted to “protect.”

The fund’s website proclaims, “The Resources Legacy Fund Partnered with California to protect nearly 17 percent of the state’s offshore waters.”

However, the website fails to mention that the so-called “marine protected areas” fail to protect the ocean from offshore oil and gas drilling, environmentally destructive energy projects, military testing, pollution by corporations and cities and all human impacts on the ocean other than fishing and gathering.

In 2014, I called Zeke Grader, the long time executive director of the Pacific Coast Federation of Fishermen’s Associations who passed away in September 2015, about a bill sponsored by Senator Hannah Beth Jackson to protect a “marine protected area”, the Vandenberg State Marine Reserve, from oil drilling, due to loopholes in both the California Coastal Sanctuary Act and the Marine Life Protection Act Initiative.

Grader, who supported the bill, pointed out how the very need for the bill “highlights what a failure the MLPA Initiative was.”

“If these are true marine protected areas, they why are we allowing drilling and other insults to the ocean in them?” asked Grader. “The whole MLPA Initiative was a phony process that provided an opportunity for Big Green and government bureaucrats to write press releases claiming these were ‘protected areas’ when in reality the fishermen and Tribes got screwed. We should have bans on oil drilling in all of the marine protected areas.”

The Resources Legacy Fund that Vogel served as communications director for continues to be a sponsor of the controversial “marine protected area” program: nrm.dfg.ca.gov/…

She frequently served as a spokesperson to promote Governor Jerry Brown’s Delta Tunnels project to export Northern California water to corporate agribusiness interests on the west side of the San Joaquin Valley and Southern California water agencies. Fishermen, tribal leaders, conservationists and environmental justice advocates considered the twin tunnels to be potentially the most environmentally destructive public works project in the state’s history.

For more information on the Newsom’s Water Portfolio program and Newsom’s announcement to withdraw the permits for the Delta Tunnels and to begin the steps for the planning and permitting of a one Delta Tunnel project, go here: www.dailykos.com/…

For a deeper understanding of the two neoliberal environmental processes that I have named here, the Marine Life Protection Act (MLPA) Initiative and the Delta Tunnel/s project, read about the deep links between the two processes here: redgreenandblue.org/…