OROVILLE – Most bank anglers and boat fishermen experienced challenging salmon fishing on opening day, July 16, for Chinook salmon on the Feather, Sacramento, American and Mokelumne rivers.
Salmon fishing was best on the Feather River, but was still tough for most anglers, even though every guide I talked to reported hook-ups and take downs.
Kevin Brock of Kevin Brock’s Guide Service checked in with 8 salmon for 6 anglers on opening day while fishing below the Thermalito Afterbay Outlet.
Other guides reported hook-ups and takedowns, but no salmon landed. “We had four take-downs while fishing below the outlet, but didn’t get any fish into the boat,” said Rob Reimers of Rustic Rob’s Guide Service. “My fishing partner, Chris Ditter, had one fish on for about 10 seconds. We were fishing on the anchor with Brad’s Killer Fish in the dragon fly color.”
He said he observed just five fish caught by boaters and a few salmon hooked by the dozens of bank anglers on both sides of the river while he was there, although both him and his fishing partner, Chris Ditter, got off the river early. 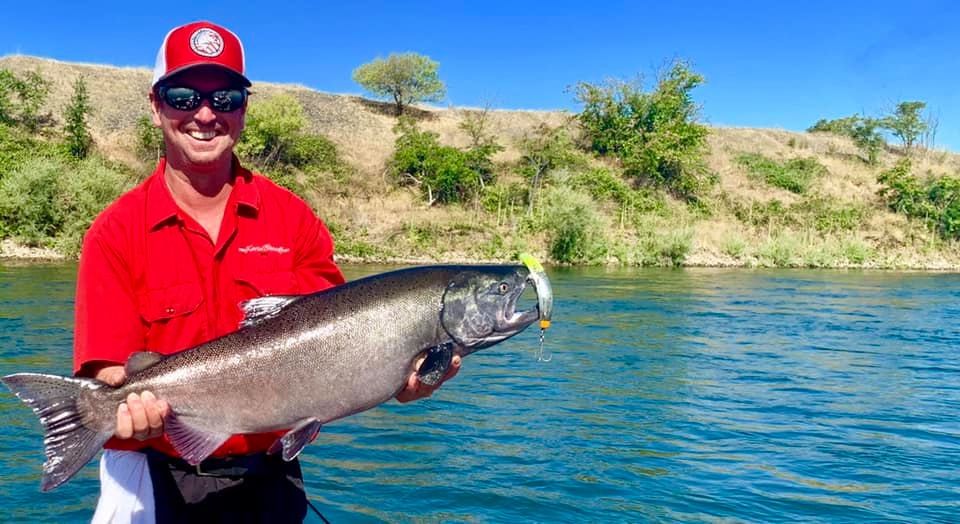 Reimers added, “If every one of the fish that hit our lures stayed on, we would have put four salmon in the boat.”
Manuel Saldana, Jr., of MSJ Guide Service, reported one take down, but no fish landed on the opener.
Expect the salmon fishing to pick up as more salmon enter the Feather and the weather cools down in the coming weeks.
Very few anglers found salmon success on the upper section of the Sacramento below Red Bluff.
“We fished hard in the major holes of the Sacramento all of the way from the Red Bluff Diversion Dam to below Lost Molinos,” said Robert Weese of Northern California Guide Service. “We hooked five salmon, but all of them got away. The fish were very spooky; they would pop right off after they grabbed the lure or roe.”
“One of my clients did catch and release a 3-pound steelhead. We back trolled with sardine-wrapped Kwikfish, back bounced with roe and boondoggled with roe. I saw a total of three salmon landed all day,” noted Weese.
The mouth of the American River at Discovery Park, a hot spot last year, produced few fish this year, spite of the armada of boats that got on the river in the early hours of the morning. “I don’t think more than 3 fish were caught on opening day at Discovery Park,” said Dennis Pfanner of Sacramento Pro Tackle.
Boaters trolled with an array of plugs and spinners, while some shore anglers tossed out spinners, but only a lucky few landed any salmon.
The salmon fishing was also difficult for anglers fishing the Sacramento out of Vieira’s Resort in Isleton. “Only about a dozen boats went out and none reported catching salmon,” said Chesney Wilson at Vieira’s Resort.
Reasons given by fishermen for the tough fishing include the full moon, hot weather, higher flows this summer that allowed the fish to move quickly past places such as Discovery Park at the mouth of the American and Verona at the mouth of the Feather; and the fact that most salmon are still out in the ocean.
The ocean continues to produce the top salmon fishing in northern California. For example, fourteen anglers venturing aboard the New Easy Rider out of Berkeley landed limits of chinooks to 17 pounds on their latest trip. The anglers trolled with anchovies outside of the Golden Gate. 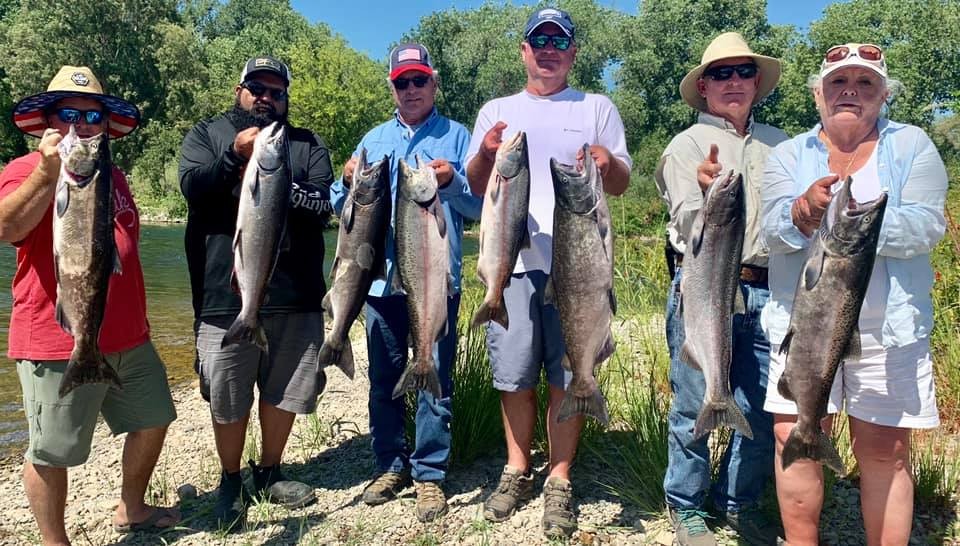 A projected return of 379,600 spawning Sacramento River fall-run Chinook Salmon to Central Valley rivers has allowed fishery managers to return to a two salmon daily limit with four salmon in possession, according to the California Department of Fish and Wildlife (CDFW). Last year, due to forecasted lower salmon returns, anglers fishing the Feather, American and Sacramento rivers were only allowed a one fish bag limit with two fish in possession.
The Feather River contributes a large percentage of the salmon that return to the Sacramento River Basin. In 2018, the Feather River Basin, including the Yuba River, supplied 52 percent – 76,209 – of the total fall run chinooks returning to the Sacramento River, including 48,882 to natural area fish and 27,327 hatchery fish. The 76,209 included 61,783 adults and 14,426 jacks (two-year olds).
“Last year my clients caught 120 fish during the season,” said Reimers who focused on fishing the Feather River in the 2018 salmon season. “I concentrated on the stretch below the Aafterbay early in the season and then focused on fishing the Yuba City areas later in the season.”
Some years the fishing is so good on the Feather River that the guides will book afternoon trips for salmon also. For example, after five anglers and I limited out while fishing the Feather below the Thermalito Aftrebay outlet with Robert Weese of Northern California Guide Service in a trip in 2016, we got in before noon with limits of good-sized salmon and two anglers went out on an afternoon trip with Weese. The couple limited out on salmon also.
Boaters use an array of techniques on the Feather, including side drifting with roe, boon doggling with roe and anchor fishing and back trolling with Brad’s Killer Fish, Brad’s Cut Plugs, Flatfish and other lures. Other anglers jjg with Gibbs Minnows, P-Line Lazer Minnows and other spoons. 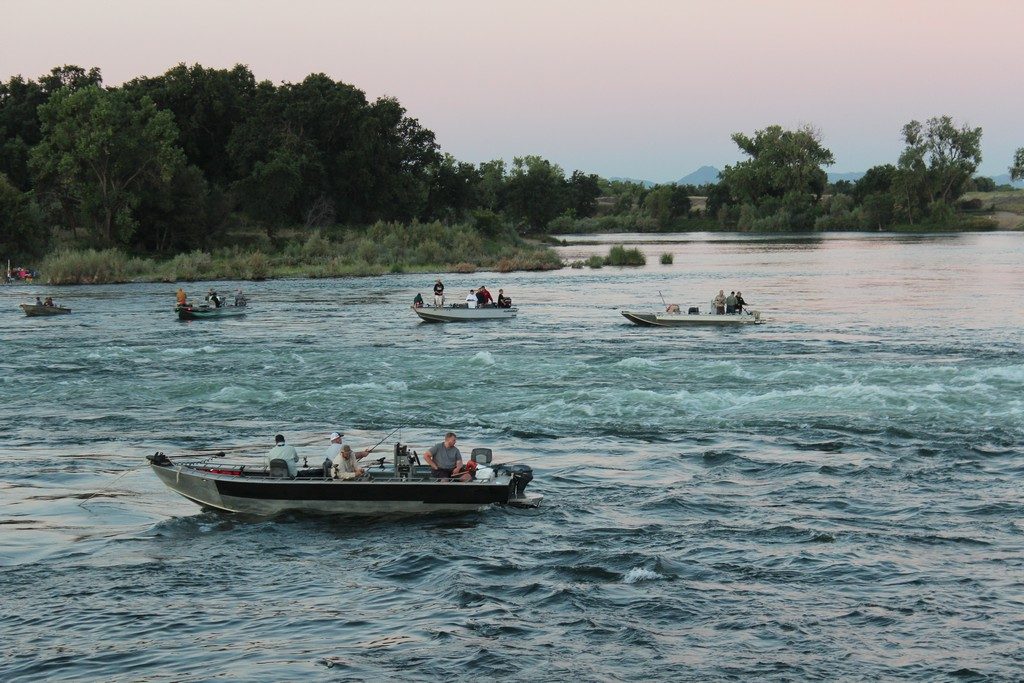 Shore anglers find the best action while tossing out Mepps Flying C and Blue Fox spinners, casting spoons and drifting salmon roe.
In addition to salmon, the Feather also has a great steelhead population. The hatchery trapped a total of 1,049 males and 839 females this year, 1988 steelhead total. The total eggs they collected is 1.1 million, more than enough to meet their production of 450,000 steelhead smolts for the Feather River. They also had enough eggs to stock the Thermalito Afterbay with over 10,000 steelhead.
In addition, the hatchery also released steelhead kelts (spawned out adult males) into the Sacramento at Verona and into the Thermalito Afterbay, with 50 percent of the fish going into each spot.
But stripers, salmon and steelhead are not the only fish found in the Feather. The river also hosts smallmouth, spotted and largemouth bass, channel catfish, American shad, and in high water years, white sturgeon. The Feather is truly a world class fishery.
You can expect salmon fishing on the Feather River, as well as on the Sacramento, American and Mokelumne rivers, to heat up as the season proceeds forward and the fish begin to move inside the Golden Gate to make their long journey up the Central Valley rivers to spawn. With the excellent fishing we have seen from Morro Bay to Bodega Bay at different times this season, a good number of salmon are expected to surge into the rivers in the next few months.

Location: The lower Feather River, the principal tributary of the Sacramento River, runs from below Oroville Dam to its junction with the Feather River at Verona. The river’s main stem is about 71 miles long. This river from Yuba City/Marysville to Verona is characterized by riffles, sandbars, long flats and some deep holes.
Seasons: The salmon season is open from July 16 through Oct. 31 in the Feather River from the unimproved boat ramp above the Thermalito Afterbay Outfall to 200 yards above the Live Oak boat ramp. The section from 200 yards above the Live Oak boat ramp to the mouth is open from July 16 through Dec. 16. For purposes of this regulation, the lower boundary is defined as a straight line drawn from the peninsula point on the west bank to the Verona Marine boat ramp. More information: https://nrm.dfg.ca.gov/FileHandler.ashx?DocumentID=169262&inline
Boat ramps: Public launching is available at the unimproved boat ramp above the Thermalito Afterbay Outfall, Live Oak boat ramp, Yuba City boat ramp, Riverfront Park in Marysville, Star Bend in Marysville, Boyd’s Pump and the Verona Marina. For more information about boat launching or camping at the Verona Marina, call 916-927-8387.
Fishing Guides: Guides are available for king salmon, striped bass, steelhead and shad fishing during the different seasons. Guides include Rustic Rob of Rustic Rob’s Guide Service, 530-632-0051; Robert Weese of Northern California Guide Service, 530-755 7196; Bret Brady of Bare Bones Guide Service 530-272-7137 or 530-263-4451, Manuel Saldana, Jr. of MSJ Fishing Guide Service, 530-301-7455, James Netzel of Tight Lines Guide Service, 888-975-0990; and Kevin Brock of Kevin Brock’s Guide Service 800-995-5543.