The conditions had gone from great to not so good. The sun was high, the surface chop we’d enjoyed all morning was gone leaving the surface glassy, the bait had completely disappeared and the screen of the sonar unit was clean without a fish in sight.
“Well it doesn’t look too good, but let’s make a pass or two anyway,” asserted Captain Kevin Brock of FishKevinBrock.Com as we inched across the face of Oroville Dam.
As Kevin readied the rods, Wes quipped, “I hope they did a good job repairing the dam, because if they didn’t we’ll be down in Yuba City before we know it!”
We all laughed and then nervously glanced at the hazard markers and construction vehicles jamming the parking lot at the closed Spillway Launch Ramp.
With four rods teamed with white tubes and Sling Blade dodgers working at various depths off the downriggers we trolled off the face of the dam from east to west. We’d been at it for several minutes and were about to give up when a rod on the port side wiggled to life. Kevin slid the rod out of the holder and handed it to Wes. We knew right away that it was a big fish from the way it bulldogged and stayed deep. It didn’t run, but it didn’t give an inch against the strain of Kevin’s Daiwa trolling rod either. 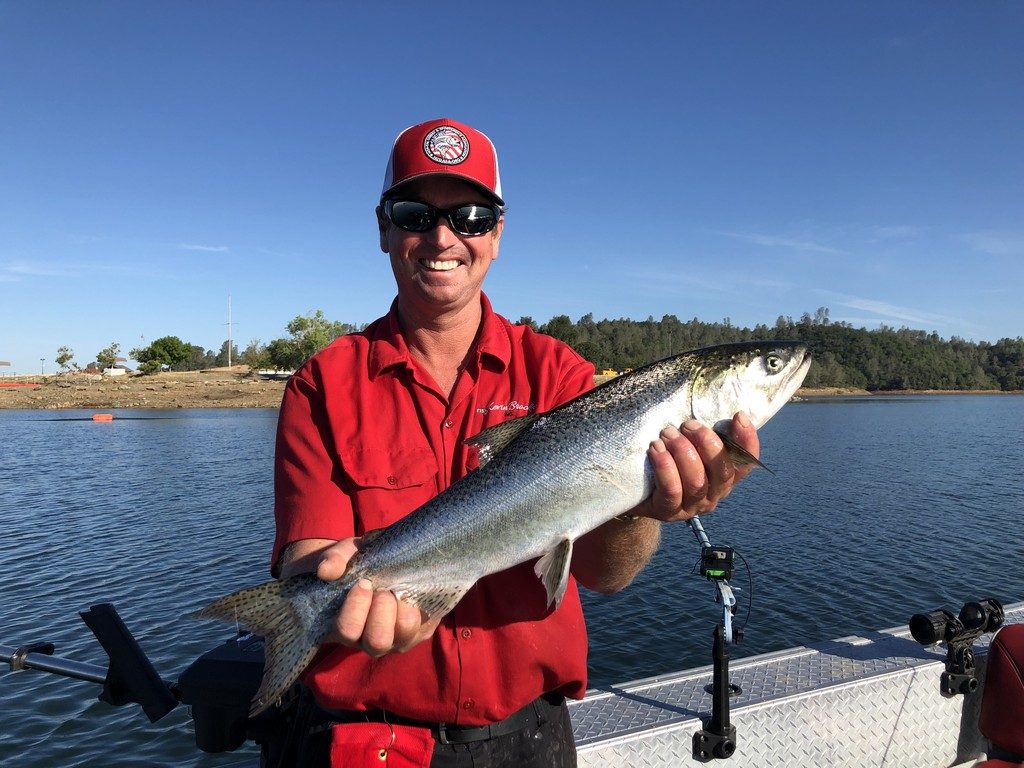 Wes kept the pressure on and presently the fish changed its strategy, surging to the surface and making a series of slashing runs punctuated with some hardcore headshaking.
When the big king appeared off the port corner it alluded Kevin’s first attempt with the net, darting off with lightning speed. On his second try Kevin scooped the big chromer and the biggest salmon of the day was in the boat. The king measured 23 inches long and weight between 3 and 4 pounds.
At that point, we were ready to close shop and head for the ramp. Our ice chest was jammed with salmon and it was getting hot, but the fishing gods had one more surprise for us.
Kevin popped all the rods off the downriggers and started cleaning up. As the lines slowly came up in the water column, he said, “This area has been crammed with bait. I’ll bet that big king has been in here feeding and now that the bait has gone he was cruising around trying to relocate it just like we were.”
Right at that moment the rod on the starboard side got slammed and doubled over. A beat later I was cautiously cranking on a powerful fish that cruised beneath the surface 150 feet behind the boat.
Ever so slowly the fish came closer. When it closed to 75 feet is surged out of the water in an incredible gyrating jump that Wes captured on video. The fish flashed silver in the sun and we assumed it was another big king.
Several minutes later when I slid the fish into the net we were all surprised to learn that it wasn’t a salmon, but rather a jumbo wild rainbow pushing 4 pounds.
Rainbows are rare in Lake Oroville and it was the only one I’ve ever hooked in my years of fishing the lake. Kevin wasted no time in reviving the fish and sending it on its way back into the cool depths of the lake. It had been an incredible day on the water and the fact that the two biggest fish of the trip came at the end only made it more memorable.
The trip had actually come about accidently. I knew Kevin had been on a hot salmon bite at Oroville, so I called him to ask if the fish were within kayaking range.
“Sure, you could light them up from you kayak Cal, but I’ve got nothing scheduled for Wednesday. Why don’t you and Wes just jump aboard my big Duckworth. It’s a great platform for filming and you can bring Lucy along too,” Kevin offered.

Well when one of the best guides on the West Coast asks you to go fishing it’s a no brainer. You simply ask when and where to meet. In this case, it was at the Bidwell Launch Ramp at 5 o’clock in the morning on July 17.
Kevin arrived right on time that Wednesday, slid the boat into the water and we were off.
It was barely light enough to film as Kevin sent the first rigs down. The sonar unit’s screen was alive with bait balls and predators so we knew it wouldn’t take long for the first bite to come.
Within the first few minutes Wes put a pair of 15 to 16-inch fish in the cooler. I followed up with a pair of my own and so it went. The bite was on and Kevin’s approach was flawless. 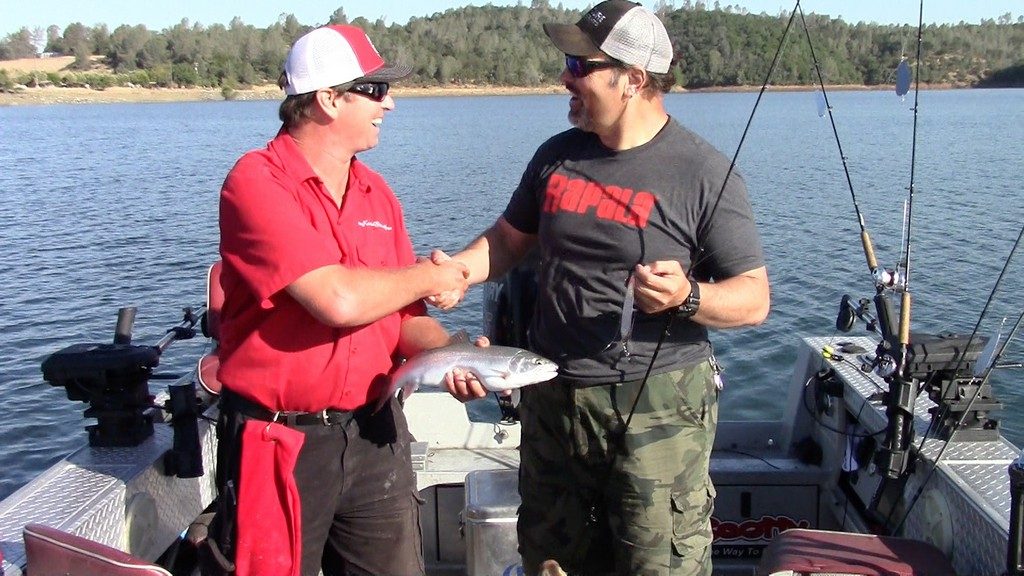 When the sun hit the water, we left the bite to go explore in front of the dam so Kevin could gather intel for future trips. We really didn’t care if we caught anymore fish. We had several chunky salmon in the cooler and lots of footage to edit. And of course that foray to the dam produced the two big fish I described in the opening.
By 10:30 we were back in the truck headed home with a hefty bag full of salmon fillets.
Kevin Brock is a full-time guide. He spends time chasing landlocked salmon, river salmon, steelhead, stripers and trout. To learn more, go to www.FishKevinBrock.Com or give him a call at (800) 995-5543. Kevin also offers up a full line of fishing products in his online store.