BERKELEY – The 28 anglers on the California Striped Bass Association, West Delta Chapter, trip aboard the California Dawn on Sunday enjoyed the tail end of one of the best halibut bites in history of the San Francisco Bay area. Although they didn’t catch their full 3 fish halibut limits, they bagged an amazing 65 halibut and two striped bass while drifting live bait in the choppy waters off Seal Rock on the South Bar of the Golden gate. 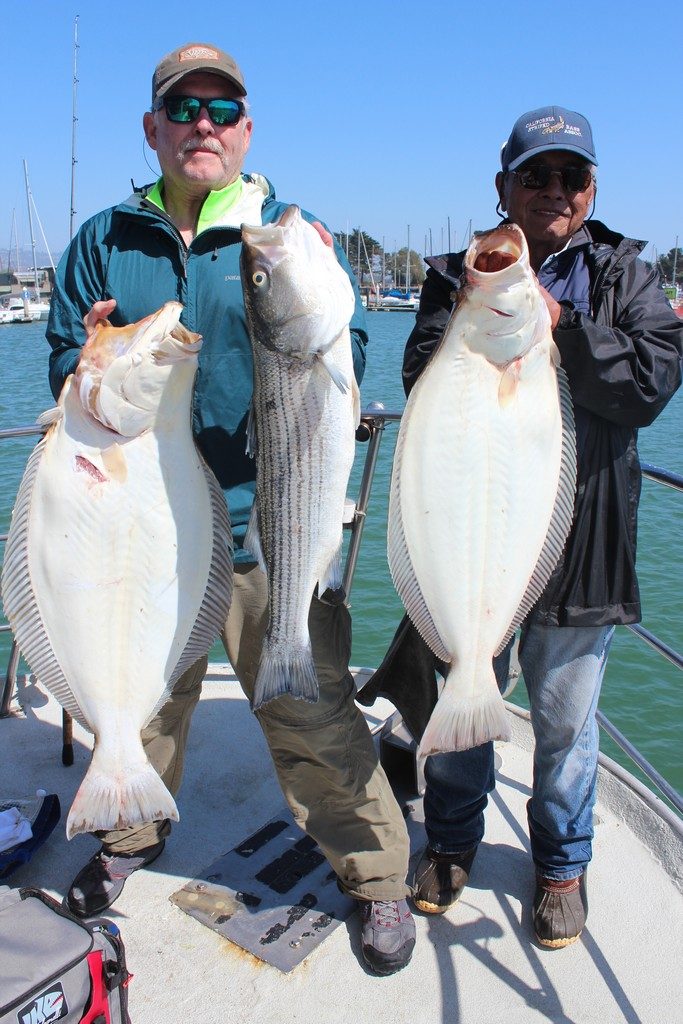 After we left the Berkeley Marina around 6 a.m., Captain James Smith drove the boat across the bay to Seal Rocks, just north of Ocean Beach. Smith told me that the anchovies had moved out of the bay – and the halibut and some stripers with them. “This has been the best halibut bite in my 33 years on the water,” said Smith.

After we got to the “hot spot,” Smith and deckhand JP Gano advised anglers to put an anchovy on their leader, drop to the bottom and then put the rod in the rod holders. Roger Mammon, the president of the CSBA, West Delta chapter, Secretary of the Restore the Delta Board and the trip organizer, was the first one to land a legal halibut that day.

As the morning proceeded, more and more anglers began hooking up. Mitchell MacReady of Manteca bagged a huge halibut over 20 pounds that ended up being the jackpot winner. The average size of the fish was around 8 pounds. 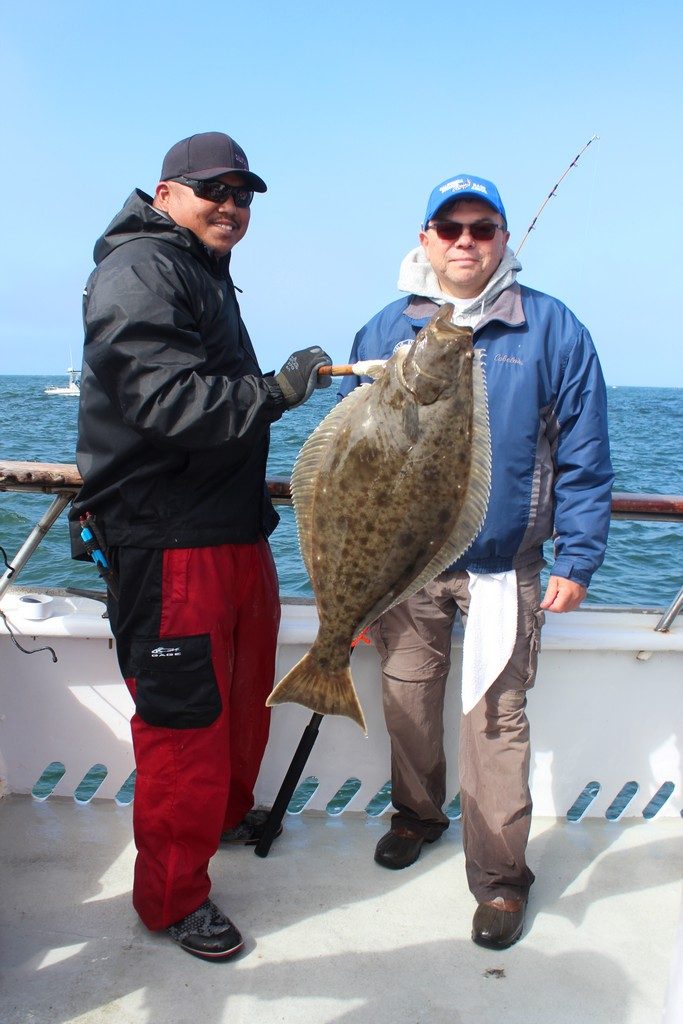 After the bite slowed down on the south bar, Smith drove the boat over to the north side of the bar off Point Bonita. The anglers picked up over a dozen more halibut there, bringing the total tally for the day to 65 halibut and two bass.

“Halibut fishing has been great in the San Francisco Bay area, where this has been one of the best seasons ever, continuously producing near limits for sport anglers. CDFW samplers working on the California Recreational Fisheries Survey have reported high success with anglers enthusiastic about their action-filled fishing experience inside the Bay. The catch has also been successful in the ocean, according to CDFW fishery biologists. Normally the catch rate drops off in late July and August for sport anglers but catches reported by party boats have been well above average this year,” the CDFW stated.

The CDFW said there are several reasons for this. Environmental conditions were optimal for Halibut egg and larval survival starting 5-6 years ago. Prolonged warm water periods resulted in several successful new year classes. Many of these fish have reached the minimum legal size of 22 inches, and are entering the fishery in force.

Another recent warm water event has shown that fishing success for Halibut will continue in the future. Sublegal-sized fish are still being caught and released by anglers, which is a good sign for fishing success next year. Taking care in releasing these fish will ensure their survival.

“Biologists monitoring the commercial catch in the Bay Area expect this to be an exceptional year based on landing reports of the pounds of commercially-taken Halibut to date. The white filet of Halibut is a prized and sought-after seafood option,” the CDFW concluded. 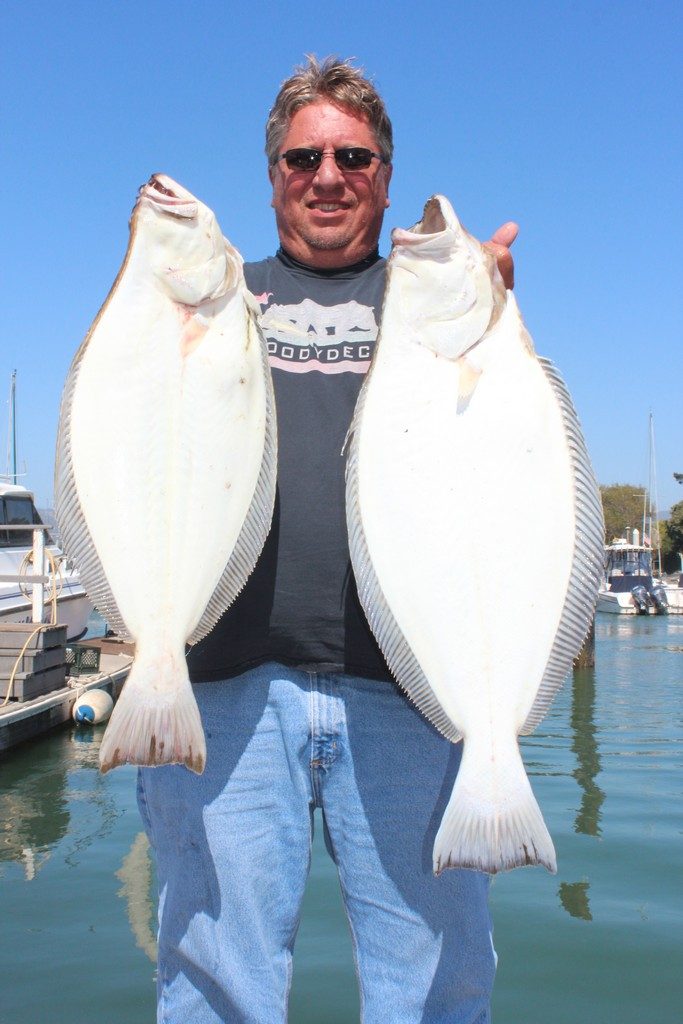 On August 7, 10 days after the trip many of the same CSBA members I went with on the California Dawn trip After listening to several dozen speakers from the California Striped Bass Association, NCGASA Delta Anglers Coalition and other organizations, the California Fish and Game Commission at its meeting in Sacramento on August 7 directed staff to continue working with CDFW and stakeholders to revise a draft Delta fisheries management policy, including potential revisions to the existing striped bass policy.

The policy will be again discussed at the Commission meeting on December 11, 2019, starting at 8:30 a.m at the Natural Resources Building Auditorium, First Floor, 1416 Ninth Street, Sacramento CA 958124.

Fish advocates say that the Coalition is concentrating on “predation” to divert attention from the main culprit in the dramatic decline of winter Chinook salmon, Delta smelt, longfin and other fish species — the massive export of northern California water south of the Delta.
“As far as today goes, I’m glad they’re willing to bring the discussion back to Sacramento,” said David J. Ostrach Ph.D., Chief Scientist Ostrach Consulting, a leading scientific expert on striped bass and Delta fish species. “

The purpose of the California Striped Bass Association (CSBA), founded by Jay Sorenson in 1974, is the preservation, protection and enhancement of striped bass. Information: csbawestdeltachapter.org/

Rockfish Regulations: The recreational fishery for rockfish (Sebastes sp.) is open to divers and shore-based anglers year-round. This fishery is open to boat-based anglers from April 1, 2019 through December 31, 2019. These species may only be taken or possessed in waters less than 240 feet (40 fathoms) deep. The daily bag and possession limit is 10 fish in combination of all species within the RCG Complex (includes all species of Rockfish, Cabezon and Greenlings) per person, with a sub-limit on black rockfish (4 per person), canary rockfish (3 per person) and cabezon (3 per person) also included in the 10 fish RCG Complex aggregate limit. Yelloweye rockfish bronzespotted rockfish, and cowcod may not be retained (bag limit: zero).

Lingcod Regulations: The recreational fishery for lingcod (Ophiodon elongatus) is open to divers and shore-based anglers year-round. This fishery is open to boat-based anglers from April 1, 2019 through December 31, 2019. Lingcod may only be taken or possessed in waters less than 240 ft (40 fm) deep. The daily bag and possession limit is 2 fish, with a minimum size limit of 22 inches total length.

Other Species: Fishing for halibut, striped bass and leopard sharks is open year round in San Francisco Bay and outside of the Golden Gate. The bag limit for striped bass is two fish 18 inches or over; halibut, three fish over 22 inches; and leopard sharks, 3 fish over 36 inches. There are seasonal closures for salmon, sturgeon and soupfin sharks in San Francisco Bay.