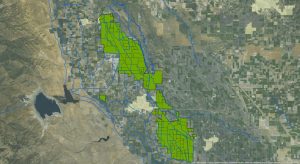 On Friday, September 6, recreational and commercial fishermen, biologists and conservation groups won a big victory in their efforts to clean up contaminated wastewater discharges from the San Joaquin Valley’s Grasslands Bypass Project when the Ninth Circuit Court of Appeals issued a landmark decision.

The Court unanimously reversed Federal District Judge Kimberly Mueller’s dismissal of their lawsuit against the Project, ruling that a Clean Water Act discharge permit is required for the Project despite the Act’s exemption of return flows from irrigated agriculture so long as any part of its wastewater is generated by activities unrelated to crop production, according to a statement from the Pacific Coast Federation of Fishermen’s Associations, the California Sportfishing Protection Alliance and Stephan Volker, the Lead Council for the Plaintiffs.

Other groups joining in the lawsuit include Friends of the River, the San Francisco Crab Boat Owners Association, INc. the Institute for Fisheries Resources. Felix Smith, the federal whistleblower biologist who exposed the Kesterson Wildlife Refuge selenium pollution scandal 37 years ago, is also a plaintiff in the litigation.

Owned and operated by the federal Bureau of Reclamation and local irrigation districts, the Project collects wastewater from 97,400 acres of farmed and unfarmed lands within California’s San Joaquin Valley.

“The Project discharges substantial quantities of selenium and other pollutants into state and federal wildlife refuges and thence into the San Joaquin River, the Delta and San Francisco Bay,” the groups and Volker stated.

In reaching its decision, the Court issued three “landmark rulings” under the Clean Water Act’s exemption for discharges from irrigated agriculture, said Volker.

First, the Court held that the Defendants had the burden of establishing that their discharges were “composed entirely of return flows from irrigated agriculture.”

Second, the Court held that the exception was limited to “only those flows that do not contain additional discharges from activities unrelated to crop production.”

Third, the Court held that the District Judge erred in ruling that the exemption applied so long as a “majority” of the wastewater originated from agricultural activities.  The Court ruled that only those discharges that are composed entirely of return flows from irrigated agriculture were exempt.

Applying these rulings to the commingled discharges of the Grasslands Bypass Project, the Court held that all of the Plaintiffs’ claims should proceed, according to Volker.

First, the commingled discharges from a solar project were not exempt even though they did not comprise a majority of the Project’s wastestream, since only those discharges that “were composed entirely of return flows from irrigated agriculture were exempt.”

Second, the Court overturned the District Judge’s dismissal of the Plaintiffs’ claims regarding polluted ground water that seeped into the Project’s massive drain from unfarmed lands including highways and residences.  Because those commingled discharges were not composed entirely of return flows from irrigated agriculture, they did not fall within the exemption.

Third, the Court held the fact that these non-exempt flows were commingled with discharges from irrigated agriculture did not bring them within the exemption.

Accordingly, because all of the Project’s discharges are commingled, all of the Plaintiffs’ claims were proper. Therefore, the Court reversed the District Judge’s dismissal of them.

The court opinion concluded, “The district court properly interpreted ‘discharges . . . from irrigated agriculture,’ as used in § 1342(l)(1), to mean discharges from activities related to crop production. It erred, however, by interpreting ‘entirely’ to mean ‘majority,’ and by placing the burden on Plaintiffs to demonstrate that the discharges were not covered under § 1342(l)(1), rather than placing the burden on Defendants to demonstrate that the discharges were covered under § 1342(l)(1). The district court also erred by striking Plaintiffs’ seepage and sediment theories of liability from Plaintiffs’ motion for summary judgment because the FAC encompassed those claims.”

The Plaintiffs lauded the decision for being a “well-reasoned ruling” enforcing the federal Clean Water Act.

“The Court’s Ruling ends over forty years of evasion of the Clean Water Act’s strict requirement for discharge permits,” said Stephan Volker, Lead Counsel for the Plaintiffs. “We are pleased that the Ninth Circuit issued a well-reasoned ruling enforcing this vital statute and protecting our rivers.”

Bill Jennings, Executive Director of the California Sportfishing Protection Alliance, stated: “After decades of inaction by our federal government to halt the contamination that has destroyed habitat for our fish and wildlife, it is reassuring to see our federal court issue a strong ruling enforcing the Clean Water Act’s mandate for fishable and swimable rivers.”

“We are gratified that the Ninth Circuit agreed with our arguments and held the Bureau of Reclamation to account for discharging massive quantities of pollutants into the San Joaquin River, the Bay-Delta Estuary, and ultimately San Francisco Bay without the discharge permit that is required under the Clean Water Ac,” said Noah Oppenheim, Executive Director of the Pacific Coast Federation of Fishermen’s Associations (PCFFA).

““This ruling will help protect the salmon and salmon fishing jobs that require a healthy Delta free of toxic discharges from the San Joaquin drainage, as well as restore the vast populations of salmon and steelhead that historically swam up the Delta and the San Joaquin River,” Oppenheim concluded.

I have requested a response to the court ruling from the Grassland Water District’s general counsel, but they have not responded yet.