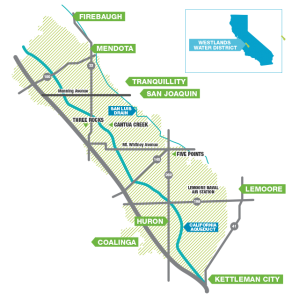 SAN FRANCISCO – The President’s nominee for Director of the US Fish and Wildlife Service (USFWS) not only has worked for agrochemical giant Monsanto, but for a firm lobbying for the powerful Westlands Water District.

On July 17, President Donald Trump announced the nomination of Aurelia Skipwith to be the Director of the U.S. Fish and Wildlife Service. U.S. Secretary of the Interior David Bernhardt, a former Westlands Water District and oil industry lobbyist that is pushing a water plan that will devastate Central Valley salmon and Delta fish populations, applauded the nomination.

“Aurelia is a leader within the department who has helped us execute our initiatives as outlined by President Trump,” said Secretary Bernhardt. “I look forward to her prompt confirmation, so she can continue her service to the American people.”

The Golden Gate Salmon Association (GGSA) is definitely not looking forward to her “prompt confirmation,” after finding that Skipwith has failed to disclose lobbying ties between her former firm, Gage International, and the powerful Westlands Water District.

Skipwith currently serves as Deputy Assistant Secretary for Fish and Wildlife and Parks at the Department of the Interior. Previously, she served as Assistant Corporate Counsel at Alltech, Inc.

Skipwith earned her B.S. in biology from Howard University, M.S. in molecular biology from Purdue University, and J.D. from the University of Kentucky College of Law. Skipwith is the first African American to ever be nominated to the position.

The Senate Environment and Public Works Committee held a hearing on the nomination on September 24.

At the head of USFWS, Ms. Skipwith would oversee the development and implementation of the controversial Endangered Species Act (ESA) biological opinion for the Central Valley Project that has come under scrutiny for blatant political interference, including suppressing staff recommendations and reassigning dozens of biologists, GGSA noted.

Ms. Skipwith’s resume lists Gage International as a former employer and her testimony before the committee describes Leo Giacometto, with Gage Intl, as her fiancée. While Skipwith is not required to disclose any information about Giacometto’s work because the couple is not yet married, her clear connections raise questions.

Public records indicate that from 2004-2010, Gage Intl and Mr. Giacometto received over a half million dollars from Westlands and a closely related group, the San Luis and Delta Mendota Water Authority.

Ranking Member Senator Thomas Carper asked Ms. Skipwith in an August 29 letter to disclose former clients of Gage International who “may have interests before the U.S. government.” Ms. Skipwith’s response of September 10 fails to disclose Gage Intl’s longstanding lobbying on behalf of the Westlands Water Distirct and the San Luis and Delta Mendota Water Authority.

“In addition, the Department of the Interior has only posted a month and a half of Ms. Skipwith’s calendar,” said GGSA. “Yet even this limited information reveals many meetings regarding issues that the Westlands Water District has a great deal of interest in, including reducing ESA regulation and the Fish and Wildlife Service’s approval of Governor Brown’s twin tunnels (also known as WaterFix), and a restoration requirement in the current FWS biological opinion for the Central Valley Project.”

Those meetings included Paul Souza of the USFWS, who reassigned 20-30 NMFS employees who had worked on the CVP biological opinion. “At the moment, it is not possible to know what an examination of Ms. Skipwith’s full calendar would reveal,” according to the group.

John McManus, president of the Golden Gate Salmon Association, blasted Skipwith’s nomination by Trump as a sign that “an aggressive attack on the California fishing industry” is “accelerating.”

”The federal administration is leading an aggressive attack on the California salmon fishing industry and on salmon fishing jobs on behalf of the Westlands Water District,” said McManus. “Aurelia Skipwith’s nomination is a clear sign that this attack is accelerating. Westlands already has succeeded in having David Bernhardt, their former lobbyist, appointed to be the Secretary of the Interior.

“Now the Senate is considering the appointment of a former employee of a Westlands Water District lobbying firm as the director of the U.S. Fish and Wildlife Service. Ms. Skipwith’s undisclosed ties to Westlands raise serious questions about her impartiality and her calendar clearly shows that she is deeply involved in issues in which Westlands has a deep interest. Given the ongoing political interference in Bay-Delta ESA biological opinions, these discoveries raise serious concerns about this nomination,” he stated.

“The California salmon fishing industry can smell this swamp all the way in California. We urge the Committee to vote down this nomination or – at a minimum – to delay this hearing to allow additional investigation,” he said

Finally, McManus called on Governor Newsom to sign SB 1, which would give him new tools to resist the Bay-Delta rollback that the Trump Administration is planning to release soon.

The Western Values Project and environmental groups are also strongly opposing the nomination.

“Aurelia Skipwith’s deep ties to the swamp and special interests were enough for former mega-lobbyist turned-Interior Secretary Bernhardt to consider her qualified to head up Fish and Wildlife Services, despite her strikingly scant resume,” said Jayson O’Neill, Deputy Director of Western Values Project. “Skipwith’s deep ties to a host of special interests make her another conflicted swamp-monster feeding into Trump’s culture of corruption.”

Bernhardt became a lobbyist for Westlands shortly after their contract with Gage Intl. expired.

As if her ties to Westlands weren’t bad enough, Skipwith was a former employee of agrochemical corporation Monsanto. Skipwith faced a lot of questions from the Senate Committee on Energy and Public Works on Tuesday, September 11.

“At the hearing, many important questions were raised surrounding Skipwith’s resume, which astonishingly lacks fish and wildlife experience, outside of the Trump orbit yet includes past work at agrochemical giant Monsanto,” said Jayson O’Neill, Deputy Director of the Western Values Project. “Skipwith’s history of working with special interests, her close ties with the oil and gas industry and the fact that she donated to Trump’s reelection campaign just days after her nomination should cause any Senator to reconsider their support for her if they value America’s wildlife.”

Aurelia Skipwith began her career working for multinational corporation Monsanto, where she worked her way up from a lab technician to “sustainable agriculture partnership manager.”

“When Skipwith left Monsanto, she briefly worked as a research and legal intern at the United States Department of Agriculture, and next worked as an intellectual property consultant for USAID,” according to a statement from the Western Values Project. “From August 2015 to August 2016, Skipwith worked for Alltech, a ‘global animal nutrition provider’ that also runs one of the largest algae production systems in the world. In April 2016, Skipwith co-founded “agricultural consulting firm AVC Global,” where she worked as General Counsel.”

On September 10, twenty-seven former Fish and Wildlife Service employees united in opposition to the nomination of Skipwith as the agency’s next director, critiquing her background and experience.