The past week was so packed with action that it went by in a blur and served to define the lifestyle I love, being both a full-time editor at the Fish Sniffer Magazine and the producer/host of one of the West’s most popular fishing focused YouTube channels, Fish-Hunt-Shoot Productions.
In addition to writing articles and reports to fuel the engine at the Fish Sniffer and creating daily video content to feed the F.H.S. channel, I spent a good deal of time on the road with both my Duckworth powerboat and Hobie Kayak in tow, seeking out the best fishing Fish Sniffer Country has to offer. What a week it was!The week started off with a crazy trip to Lake Shasta to play around with my new lineup of trout fishing grubs. With late summer trout fishing being consistently poor at my home lakes, Wes Ward and I decided Shasta offered the best option. Yes, it was a 3-hour drive from home. Yes, we’d only be able to fish for about 4 hours. And yes, we’d have to drive another 3 hours back home… 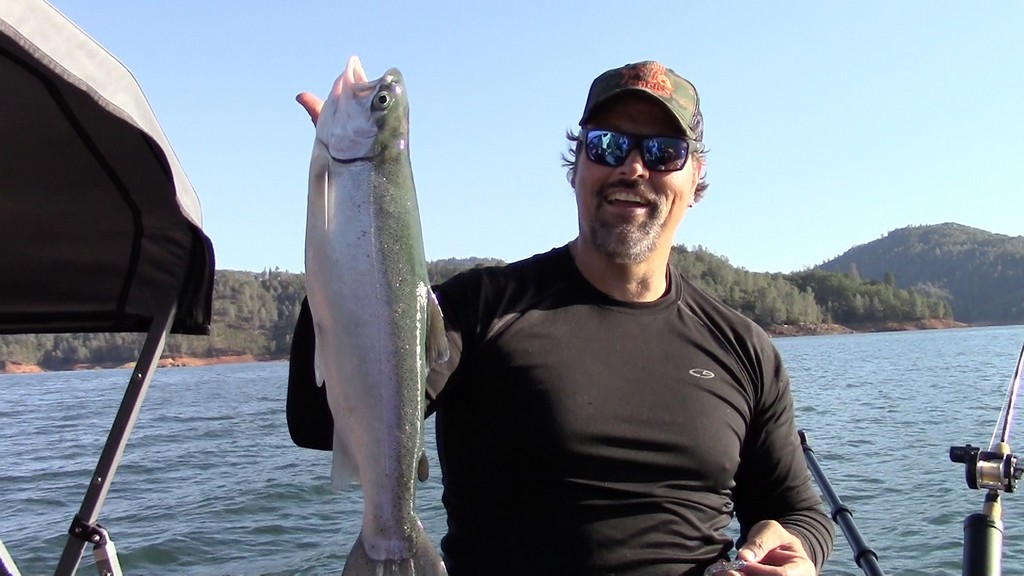 That’s 6 hours driving for 4 hours fishing. The positives were that the drive-up Highway 5 is easy and that we’d have Wi-Fi and cell phone reception the entire way so that we’d be able to take care of a bunch of calls and office work while on the road. Plus, I had a source up on the lake, named Robert that had identified an area for us that was holding fish, meaning we wouldn’t have to spend a lot of time searching.
After a dark-o-thirty drive, Wes and I were in the parking lot at Bridge Bay before sunrise and by the time we had filming light we were motoring down the McCloud River Arm of the lake. When we started marking fish 75 to 100 feet deep off a long rock wall we dropped the downriggers and started working the marks with Fire Cracker and Cotton Candy colored 3 inch grubs lubed with Threadfin Shad scent Pro-Cure Super Gel rigged behind Mack’s Lure Mylar Hot Wings Flashers.
The bite wasn’t wide-open, but within the first hour we had several tentative strikes and put a 17 inch rainbow in the cooler. 90 minutes later, with another 17 incher in the cooler, Mr. Big came knocking.
The strike was pretty light and the fish didn’t pull the line out of the downrigger clip. Initially the fish didn’t feel like anything special, but the closer I reeled it to the surface the harder it fought and the bigger it felt.
When the rainbow boiled up behind the boat, the sun was shining off the water with such brilliance that I had a hard time seeing to net the fish as Wes ran the camera.
Finally, I was able to slide the fish into the net. As I lifted it over the transom of the Duckworth I was blown away by the length and girth of the rainbow. It was well over 4 pounds and measured 24.5 inches…Hands down the biggest rainbow I’d ever landed at Shasta.
The big ‘bow had pounced all over a Fire Cracker Grub and the bait was half way down it’s throat when I tried to extract the hook. When I cleaned the fish, it had two shad minnows in its stomach that were just a hair smaller than the grub. Match the hatch and you will prosper!
Sadly for us, that was the last fish of the outing. Once the sun hit the water in earnest the bite shut off and without time to go searching for fresh fish, we opted to trailer the boat and run for home.
Two days later I was out on the waters of Rollins Lake in my Hobie Pro Angler. I landed a mess of bass and bluegill during that outing. You can read all the details of that adventure in the kayak column in this edition of the Fish Sniffer! 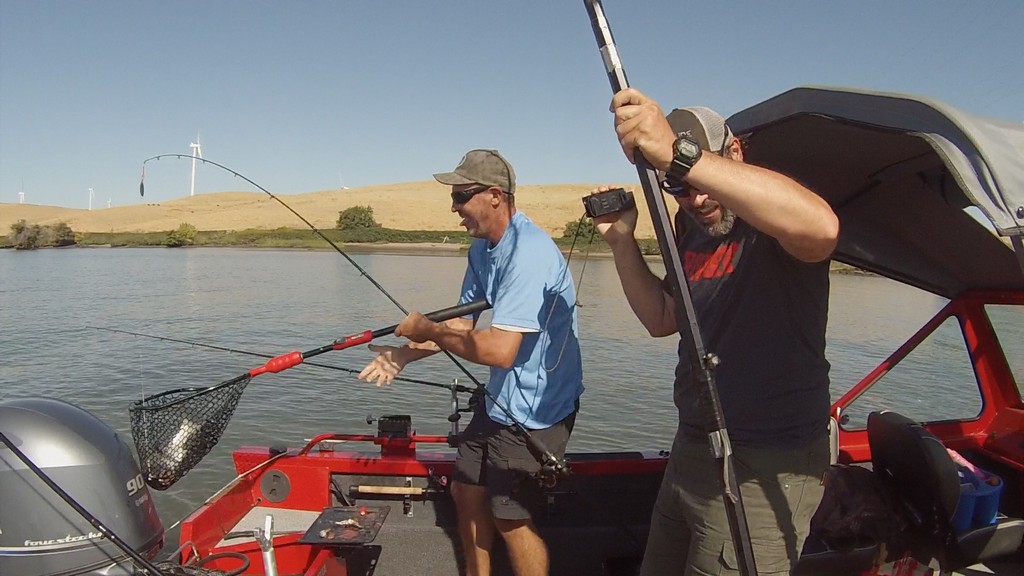 My most recent trip found Wes and I loose on the waters of the West Delta in the Duckworth looking to hook some stripers on bait. We’d installed some balancer mounts for bait fishing this November and December, but we figured a September shake down trip to try out the balancers, our anchor and my 8’ Striper-Halibut-Salmon rods would be a good idea.
The fish were there, but so were the weeds big time! We ventured all the way down to the Pittsburg area from Brannan Island looking for fish, but ended up anchored near the Power Lines below Decker Island in about 20 feet of water.
While soaking shad, sardines and chicken livers we had about 1,574 bites from baby stripers that were so small we couldn’t even hook them. They would simply nibble our hooks bare and then split for greener pastures. We also had to reel in at least 25,000 times to clear big clumps of weed off our gear. Mental note, September is not the time to anchor fish the West Bank during a brisk outgoing tide unless your ambition is collecting every manner of vegetation found in Delta waters!
As the tide started to slow down, Wes got serious and put the wood to a dandy 23 inch schoolie striper that moved into to put the chomp on a big glob of chicken liver seasoned with a strip of sardine fillet!
Better still Wes didn’t want to eat the bass so I ended up with a nice sack of snow white fillets at the end of the day that I ate for dinner the next night in the form of striper tacos garnished with garden fresh tomatoes and some outstanding homemade guacamole! 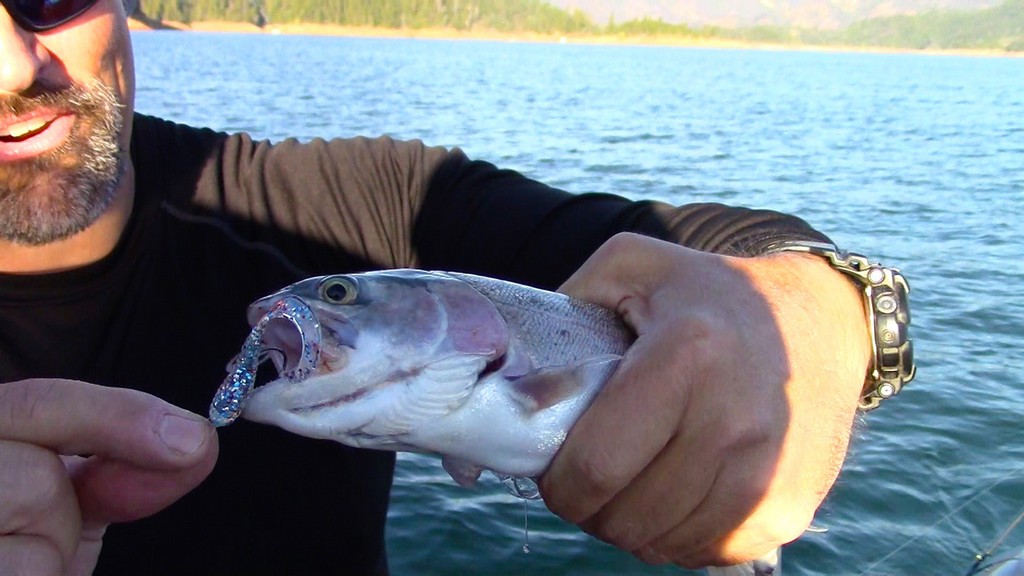 What’s next? Well as I write these words Wes has his family out at Collins Lake and he’s already texted me a photo of his son holding up a hefty largemouth. When Wes gets back I’m picking up the boat and heading up to Shasta to take Gena on a birthday fishing trip. We’ll be staying at Bridge Bay and exploring the depths of the big lake for rainbows, kings and maybe a bonus brown.
I’m out of space for now, I’ll be coming back at you in the next issue of the Fish Sniffer with more tales of NorCal fishing and adventure!