During the Winnemem Wintu Run4Salmon last year, salmon fishing in the Sacramento Area was surprisingly good. As we were getting ready to board the boat upriver from Discovery Park to Colusa last year, two boats came into the launch ramp with early limits of salmon.

We also saw productive fishing on the run upriver from Pittsburg to Sacramento with James Netzel of Tight Lines Guide Service last September. Anglers in boats and those fishing off the Walnut Grove Boat Docks displayed chrome bright Chinook salmon.
This year has been different, as the fish seem to be behind on their appearance upriver to spawn.

We travelled in two boats for the Winnemem Environmental Justice Tour with Caleen Sisk, Chief of the Winnemem Wintu Tribe, on September 17 from Pittsburg to Sacramento. 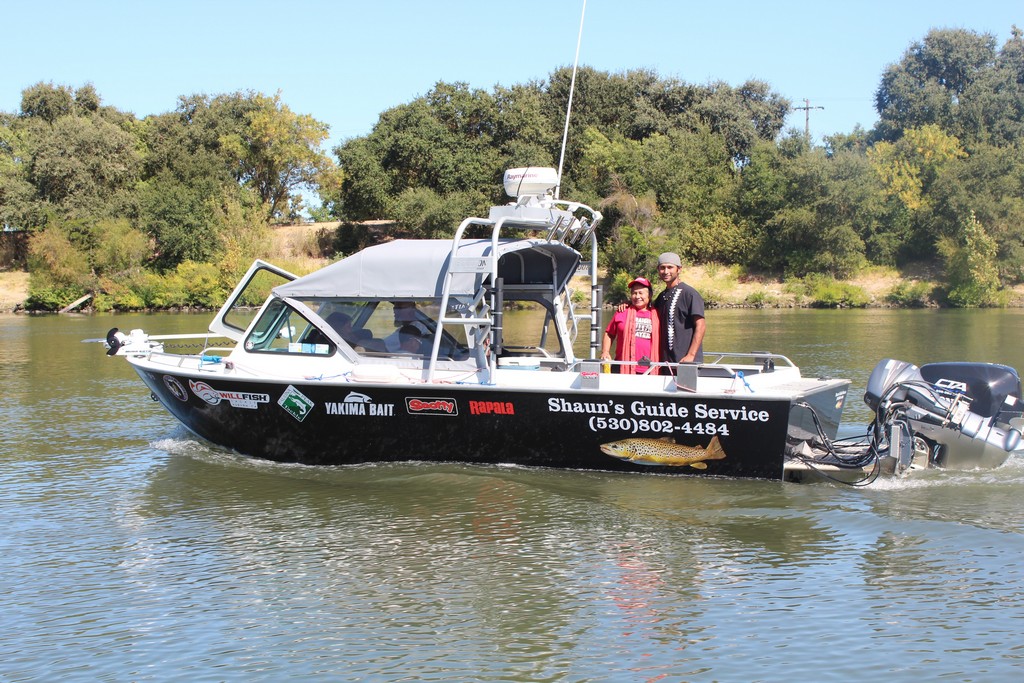 “For years I’ve heard Chief Caleen, the boat captains, fishermen and all water people saying how needed it is to bring our government officials on this part to give them a first-hand experience on what we are working to protect,” said Niria Alicia, tour organizer, in explaining her reasoning for organizing the tour.

After were sent off with song by Run 4 Salmon participants at the Pittsburg boat ramp, we journeyed upriver to through the Delta to Sacramento.

On our boat, Gary Thomas, a Pomo ceremonial leader who formerly was a well driller, explained the threats to the Delta posed by the many gas and oil and other pipelines that cross the river. All three officials took notes. Thomas noted the presence of old and existing wells on the river as we travelled upstream.

I explained how necessary it was to protect the Delta, the largest estuary on the West Coast of the America, from the many threats to it, including the Delta Tunnel, climate change, continuing massive water exports of the Delta. toxic chemicals and climate change.
Both boats stopped at the Delta Cross Channel Gates above Walnut Grove and begin drifting upriver, due to the reverse flows based by pumping the water from the Sacramento into the Mokelumne, the San Joaquin and then the South Delta pumps. 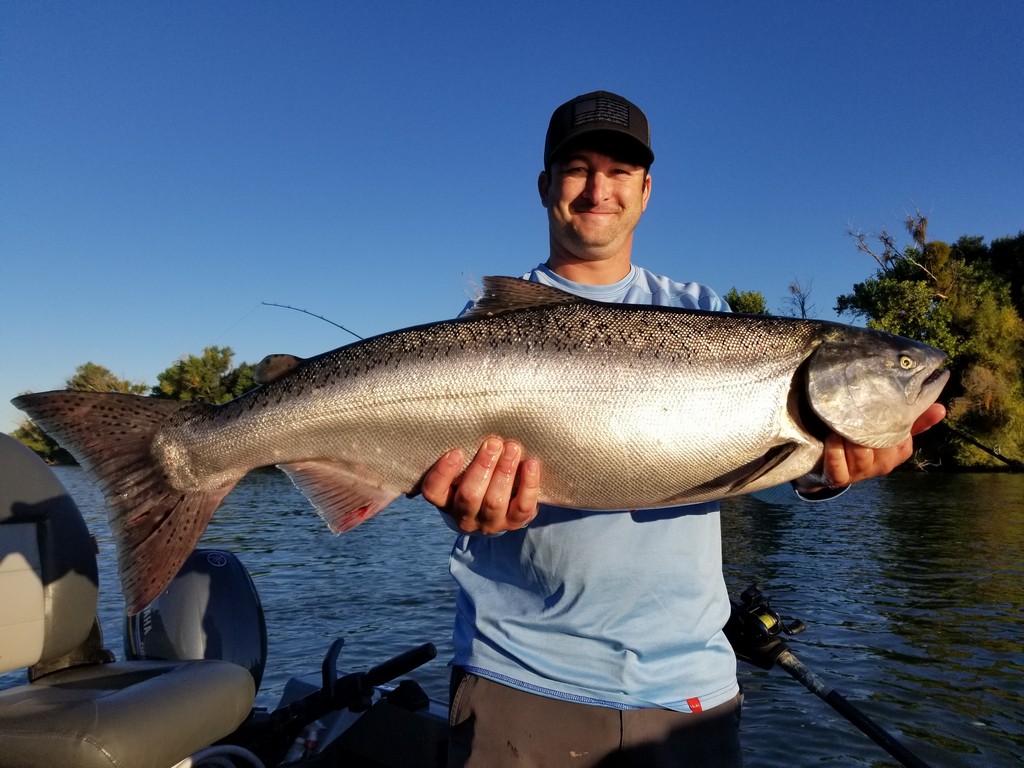 “Imagine if you were a salmon,” Netzel told the three state officials. “The water doesn’t go to the ocean – it goes to Southern California and big farmers in the San Joaquin Valley.”

We also stopped half way through the trip at Mel’s Ice Cream, where we ate some great lunches and ice cream.

There were lots of people fishing on the Walnut Grove Dock both on our trip out and down the river, but we didn’t see any fish caught. Netzel and I did see one salmon on one stringer on a boat during our trip down from the Sacramento Yacht Harbor to Pittsburg in the morning.

On a sheet discussing the tour for the participants, environmental points of interest also included.
• the DOW Chemical Plant at Pittsburg that currently produces latex, agricultural chemicals, fumigants, fungicides and hydrochloric acid;
• the Rio Vista Army Reserve, where they are several petroleum contaminated sites as a result of underground storage tank leaks, as well as metal contamination in the soil and dioxin contamination in the vicinity of the incinerator;
• the Borges Clarksburg Airport, formerly now a commercial crop dusting facility and now used for recreational aviation;
• the Sacramento Manufactured Gas Plant in Sacramento; and
• the PGE Sacramento Site in Sacramento.

After the tour, Agustinez commented, “This was the first time I have as an individual gone down the Sacramento River through the Delta and I will report to the director on what I saw. When we get people face to face, it’s not a big fight, but about moving forward moving on common goals. We are also wanting to get more information on the natural gas and other pipelines that cross the river.”

At one point in the tour, Agustinez told us her view that the Delta Tunnel would make conditions better for salmon and other fish by making the moving of water “more efficient” and entraining less fish in the Delta pumps, where new screens would be installed. However, Roberts, Netzel and I told her all of the evidence we had looked at showed us that the Tunnel would in fact make conditions worse for salmon, Delta smelt and Bay-Estuary fish populations by taking more water from the Sacramento River into the tunnel for export before it flows through the Delta.

Chief Sisk also questioned Agustinez about whether the levee projects put in last year on the river in the Sacramento River would be used for mitigation for the Tunnel. Agustinez claimed these projects were independent of any work on the Tunnel, since the Bay Delta Conservation Plan was now divided into two components — the EcoRestore, the restoration component, and the WaterFix, the conveyance component.

In February, Newsom said he wanted to reduce the Twin Tunnels to a single tunnel. “I do not support the WaterFix as currently configured,” said Newsom at a press conference.

Even though the new Delta Tunnel project supported by Governor Gavin Newsom has not been approved, the Department of Water Resources is proceeding forward with negotiations with its water contractors over the State Water Contract Amendment for the Delta Conveyance.

Three days after the Environmental Justice Tour, the second motor boat segment of the Run4Salmon took place on Friday when Alyx and Brennen Howell of Santa Rosa, both members of the Wappo Tribe, took Sisk, leaders of the Winnemem Wintu Tribe and their allies in a jet boat up the Sacramento River from Discovery Park to Colusa.

The salmon fishing was better at press time than during the tour, although it was still tough. Hopefully, more fish will start moving into the river by mid-October.

Trollers are working for their salmon, but the quality of the fish is impressive on the Sacramento. Captain Netzel reported that one angler landed a bright 15 lb. salmon in his boat on his last trip while trolling with Silvertron spinners at Verona. 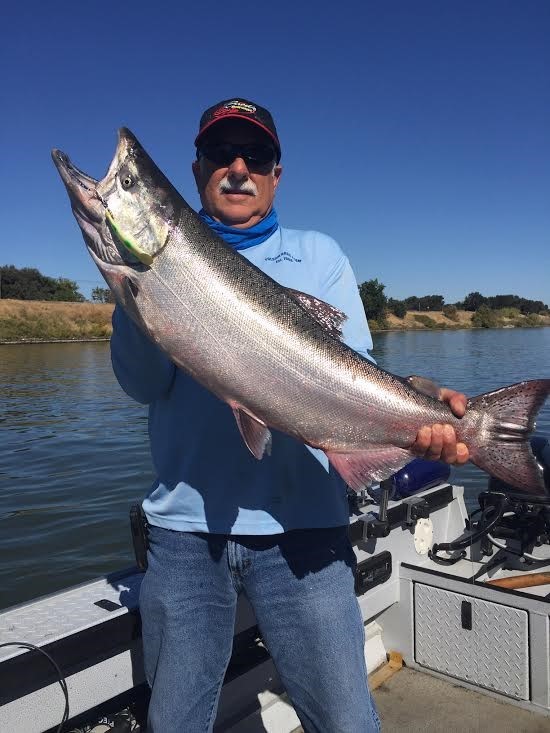 In March, the National Marine Fisheries Service forecasted 379,632 adult Sacramento River Fall Chinook (SRFC) salmon were in the ocean off the West Coast, compared to 223,854 a year ago at the same. The number is derived from the number of jacks (two-year-olds), 41,184, that returned to the Sacramento River and its tributaries in 2018.

Whether the modeling will turn out correct is another story, but we won’t know until the numbers of salmon that return to the hatcheries and natural spawning areas in 2019 are compiled by the state and federal fishery managers to develop ocean salmon abundance estimates in February 2010.

A total of 105,739 hatchery and natural area adult spawners were estimated to have returned to the Sacramento River Basin in 2018, meeting the criteria for “overfished” status in 2018, according to the PFMC.

The excessive diversion of Central Valley rivers and massive water exports from the Sacramento-Sacramento River Delta in dry and drought years are two of the primary causes of salmon declines, combined with poor ocean conditions, the blocking of migration to the spawning grounds by dams and habitat destruction.

On the day after the conclusion of the Run4Salmon at the McCloud River above Lake Shasta, the Winnemem, environmentalists, anglers and the public trust won a partial victory when the Westlands Water District announced the termination of its CEQA analysis of the controversial Shasta Dam raise project.

Opponents of the project say the dam raise would inundate many of the remaining sacred and cultural sites of the Winnemem Wintu that weren’t flooded by Shasta Reservoir in the 1940s, as well as harm salmon and steelhead populations on the Sacramento River and its tributaries.

The reason for the termination is “because the Superior Court issued, at the request of the California Attorney General, a preliminary injunction that stopped the District from preparing the environmental review document until after the Court conducts a trial and issues a final decision in the case,” according to a statement from the District.

However, Chief Sisk pointed out, “Still, I don’t trust BOR will stop…so far they have NOT stopped! Winnemem Wintu still deserves justice!”
What is the Run4Salmon? “Winnemem Wintu Chief Caleen Sisk and a collective of Indigenous women, activists, and allies are organizing the Run4Salmon, a 300-mile trek that follows the historical journey of the salmon from the Sacramento-San Joaquin Delta to the Winnemem (McCloud River) to raise awareness about the policies threatening our waters, our fish, and indigenous lifeways.

It’s a dire time in California for wild chinook salmon (Nur) – climate change, giant dam projects and draining rivers for Big Ag irrigation threaten the survival of the keystone keepers of our waters. Salmon bring essential nutrients to the waterways, forests, and lands.

However, since the Shasta Dam was built 73 years ago, the salmon have been unable to return to their home waters in the Winnemem’s ancestral watershed. Now, the Winnemem Wintu Tribe is working on a plan to bring the genetic descendants of their salmon from New Zealand back to their home waters.” For more information, go to: www.run4salmon.org.

Salmon Fishing Regulations: The salmon fishing season is set at the California Fish and Game Commission meeting every April after the Pacific Fishery Management Council adopts the ocean salmon fishing regulations. The salmon season in 2019 runs from July 16 to December 16 except on the Sacramento River and on the American from the Jibboom Street Bridge to the mouth. The daily bag limit is two salmon and the total possession limit is four fish this season. Review the California Fresh Water Sport Fishing Regulations Booklet and Supplement for more information.

Motorized watercraft and trailer plus vehicle pass – $100.00.
Boat launching: Concrete boat ramps are available at Discovery Park and Howe Avenue in the American River Parkway and at the Broderick Boat Tramp, Miller Park Regional Park and Garcia Bend on the Sacramento River.