If you haven’t noticed, Pyramid Lake is getting a ton of ink these days. I’m one of the guys who can’t stop writing about it. If you are sick of reading about Pyramid Lake, and you’re wondering if this lake is just a bunch of over-rated hype, then you must make the trip and sample it for yourself.
This is the world’s best cutthroat trout fishery, and there’s really nothing else even close to it. Not only is it the world’s best cutthroat trout fishery, but it’s also one of the all-around best fishing destinations on the entire globe. Chances are if you’re reading this, you live within driving distance, and you owe it to yourself to fish this gem.
Pyramid Lake’s season started on October 1. Early in the season boat fishermen catch 95% of the fish for the first month and a half or so. The first week will be nothing short of a blood-bath. If you’ve ever watched a Youtube video of guys poke-poling tuna, that’s kind of what it will be like if you find the right conditions of Tui Chubs (the lake’s dominant baitfish) and hungry trout feeding on them.
These trout will be circling the chubs like aquatic wolves; just looking to pull a weak or injured chub from the herd. One to two ounce P-Line Laser Minnows in chrome with a green or blue back will be absolutely irresistible to these bruisers.
The action is often hot, and the fish will range from 2-20 pounds. You read that correctly, “20 Pounds.” Huge trout that fight like Chinook salmon will be caught. Pretty much anybody that pays their dues will catch at least a couple trout over the ten-pound mark during an early season trip, and a few lucky anglers will encounter a true behemoth that will tip the scales in the 20-25 pound range. Not to mention, it will “get old” catching tons of 18-23” shakers.
A good sonar unit is the key to vertical jigging with spoons like the P-Line Laser Minnow. Another good option is to look for schools of Tui Chubs balled up on the surface and cast a ¾ ounce chrome or gold Kastmaster into the fracas. 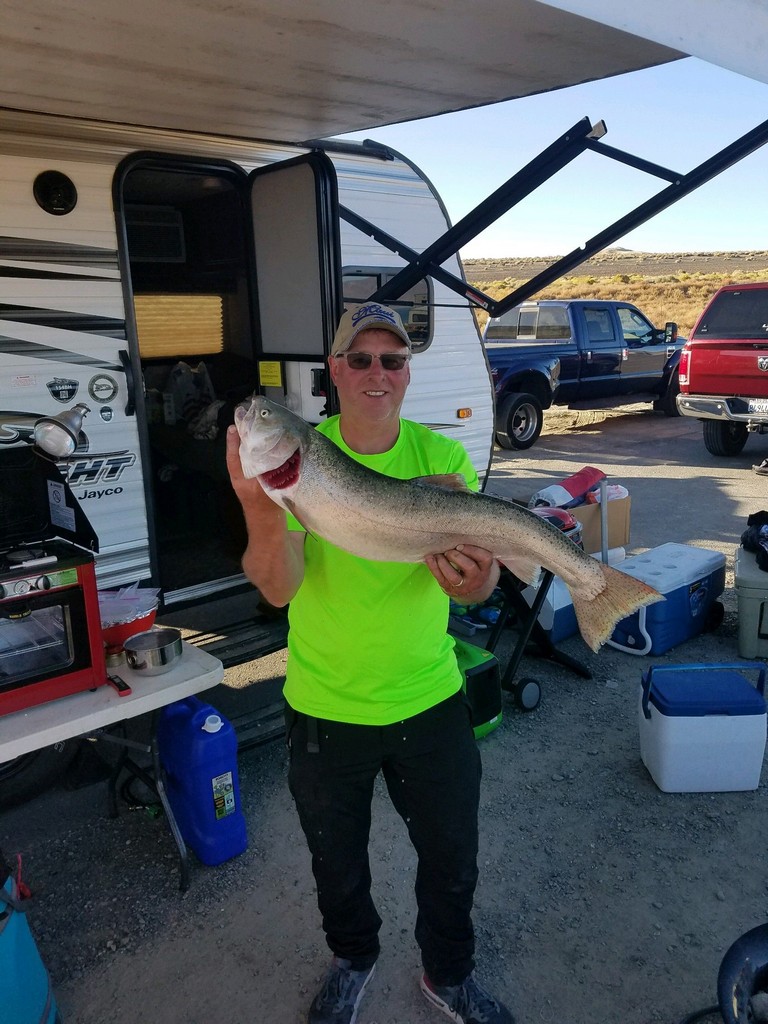 Cast the spoon into the school and let it flutter down, if the line ticks, a trout has eaten the spoon; reel down and slam the hook. Don’t get complacent on the hook-set. The next fish that eats could be a Chinook size trout.
All your tackle needs to be in top order. If knots or leaders are frayed, avoid complacency and re-tie. Bent hooks should be replaced with new ones. Don’t get cheap on the hooks either. Premium Gamakatsu and Owner hooks will hook and land more fish, and the extra cost is a small price to pay. Leaders should be on the stout side. 15 pound Maxima Ultragreen or 17-20-pound test Fluorocarbon is a good choice.
Trollers also catch plenty of fish, and the opening month of the season is a great time for lazy trolling to pay off. Without a doubt, more big fish are caught at Pyramid Lake by trollers diligently working the bottom structure than any other gear fishing method.
Fly fishermen probably catch more big fish than anybody, but that’s another article entirely. The larger Pilot Peak variety of fish don’t seem to be as structure oriented as the smaller Summit Lake fish that are also found in the lake.
The Pilots are more likely than the Summits to be found in 80 feet of water suspended 50 feet down pestering balled up schools of Tui Chubs. This makes them a very forgiving target for casual trollers that just put a rod down 50 feet and drag a lure such as a 4” Lyman or an Apex around. It really can be that simple for the first month or so of the season.
As the water cools, the baitfish will disperse, and the casual troller will see declining scores, but early in the season laziness pays off. Once the baitfish disperse, it’s more important to bang your lures against bottom structure such as downrigger ball eating tufa rocks.
Of course, working the bottom in October will definitely catch plenty of fish as well. A great way to slowly work the bottom is to put a U20 Flatfish on a three-way rig just like you’d use for salmon trolling on the Sacramento River. I even like to use a spreader bar as it keeps my leader from tangling with the sinker dropper line.
I like to run the Flatfish back about 4-5’ from my spreader bar, and I like to feel my sinker tap bottom at least once every 30 or so seconds. I really like utilizing this method from a tiller drive boat as kicking the outboard in and out of gear is important in maintaining bottom contact. I like to put the boat in gear and troll forward for 10 or so seconds. This will cause the lure to rise off the bottom. I then like to throw the boat in neutral for a few seconds and let the 4-6 oz. sinker slowly drag the lure back to the bottom.
Cutthroat are notorious followers, and this rising and falling of the lure with speed-ups and slow-downs draws strikes from otherwise suspicious fish. Plus, this method works best with the rod in hand, and its way more interactive than just mindlessly trolling with a lure on a downrigger. Not that I don’t do my share of brainless trolling, as I am occasionally known to just shut my brain off and drag lures from time to time.
If you’ve been longing to catch a salmon sized trout, the fall of 2019 at Pyramid Lake is probably your best shot in the entire country or maybe the world at doing so.