The attention span of a twelve-year-old is about a tenth of how long it takes to read the title of this article, which can make fishing with my twelve-year-old son, Jacob, a painful experience if the bite isn’t absolutely lights out. So, when Cal told me about his incredible trip to Lake Davis mid-week, I knew I had a chance to pull off a dad and son trip that would be remembered for the catching, NOT the boredom of fishing.
We rolled out of the driveway with the Duckworth in tow around 6AM packing the typical day’s rations of donuts, Fritos, Oreos, and buckets of candy and headed up the hill for Lake Davis. It was a rare calm day with just the hint of a breeze blowing out of the South when we slipped the boat off the trailer into the weedy shallows of the lake just before 9AM. A few other boats were already circling, and the bank was dotted with anglers.
Armed with Cal’s info from just a couple of days earlier and a healthy box of tackle, we dropped lines and started slow trolling towards the main body of the lake. 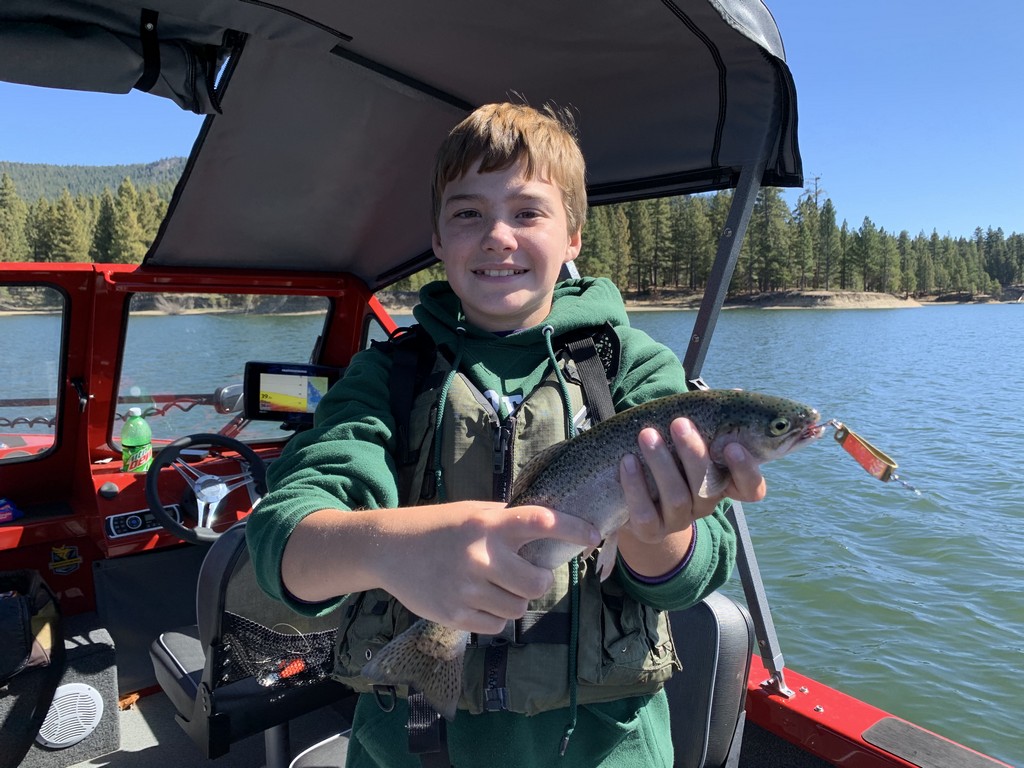 Davis is shallow, and the weeds often grow within 5’ of the surface. Our plan was to keep our gear just above the weeds, which meant we could topline a couple of rods easily. Just to increase our odds, we also dropped a couple of lines a few feet down on each Cannon Downrigger. The initial spread consisted of a Mack’s Lure Cripplure, a Hum Dinger, a small plug, and one of Cal’s grubs behind a small dodger.
We pulled these setups from one end of the lake to the other with only a couple of short strikes on the Cripplure. The 12-year-old was still in the game, but his Snap feed was growing by the moment with random selfies from around the boat.
I had to shift gears and try something different, so we switched over to a faster presentation and doubled down on the Mack’s Lure spoons. This meant we were no longer using the Minn Kota for propulsion, so the kid was assigned the helm to steer the boat as we cruised along around 2.4MPH.
On our second fast pass of the island in the middle of the lake, one of the Cripplures on a top line hooked up, and Jacob reeled in the first fish of the day. Boom!
Now I have his undivided attention. He insisted on resetting the rod and resumed his post at the helm. About the time he maneuvered the boat back on its path, the same rod lit up again. The second feisty rainbow hit the deck. 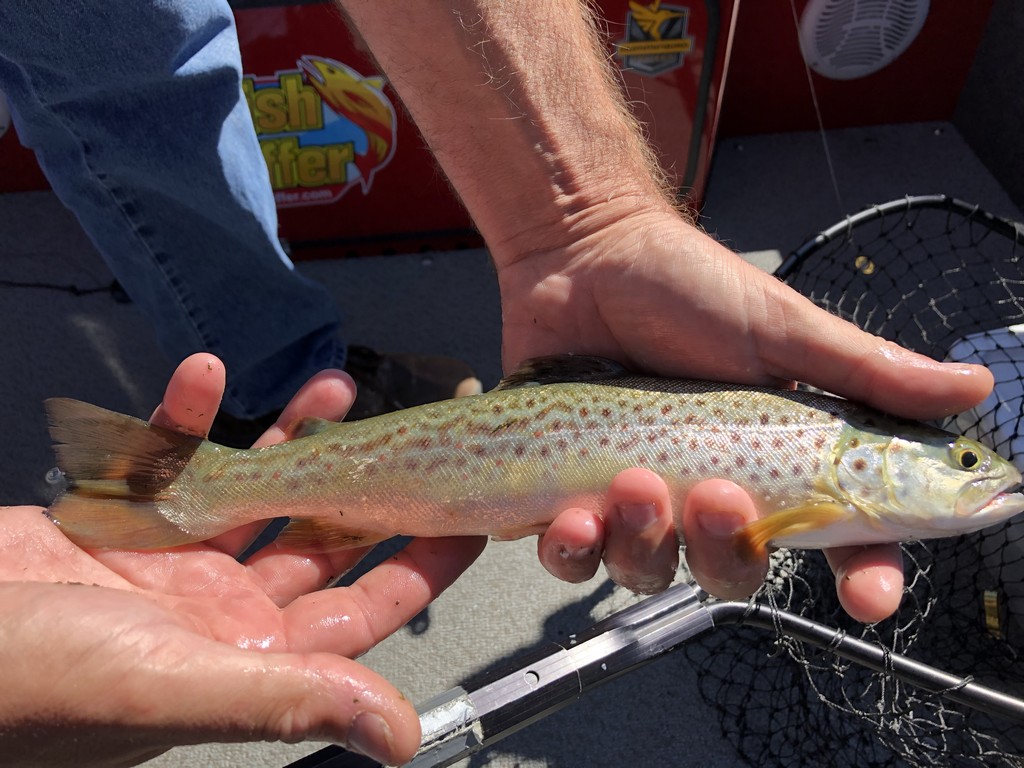 For the next 3 hours, we managed to land a healthy heap of rainbows with an occasional brown trout in the mix, all on Cripplures trolling substantially faster than the other boats on the lake.
By the time we were ready to set course to troll back to the launch across the lake, we switched all our gear over to brass colored Cripplures. I honestly can’t remember the last time I was on a bite so good that I used the same lure on 4 rods.
As we neared the launch, still hooking a trout every few minutes, one of the rods doubled over almost pulling the rod completely out of the holder mounted on the transom. Jacob dove into action and started reeling as the fish dove deep into the weeds. We both knew right away this was a better fish than anything we had landed all day.
Like a pro, Jake kept the line tight and let the fish take as much line as it wanted on the loose drag. Eventually tiring out, Jacob led the beautiful rainbow right to the net and onto the deck. Jacob was speechless as he admired the biggest trout of his young angling career.
Jacob was all smiles and had long forgotten about selfies and Snapchat as we made the slow drive back down the hill. Success! Dad managed to pull off a fishing trip that even a 12-year-old approved of.