As I was reeling harder than I’d ever reeled before, I heard a man’s voice over my shoulder.
“No matter how hard you try,” he muttered, “you’re never gonna catch that fish…”
I ignored the voice, unwilling to let that remark break my concentration. Was this some sort of reverse psychology to get me to try harder? Or maybe a jab at my lack of upper body strength? After some time, my arms eventually gave out…and I was still getting spooled.
I finally looked over my shoulder and there stood Captain Chris Smith, arms folded, half smirking at me.
And that’s when I realized I was hooked on the rocky bottom of the ocean floor.
Disappointed, but relieved to finally get a break, I handed him my rod so he could pull me free. 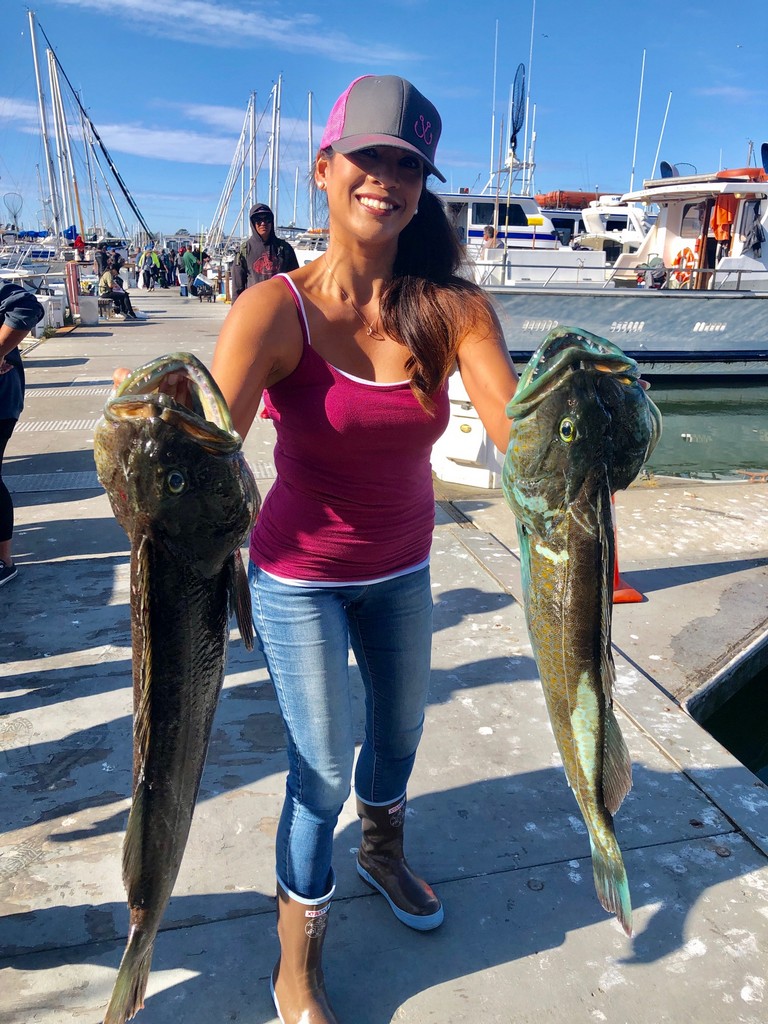 This wasn’t my first rodeo with Pacific Dream Sportfishing, so I blame my lack of sleep for not detecting the captain’s subtle sarcasm sooner. Their tight-knit, entertaining crew is why I keep coming back for more.
The goal that day? Catching my first lingcod. I didn’t know what to expect, and I had done zero research on the rigs and baits typically used, so I just hopped on board and hoped for the best. I also put a lot of faith in the cherry-topped cheesecake I brought for the crew, hoping it would bring me some good luck.
We were warned that there was “going to be some weather” that day. In other words, the water was expected to be rough. Because we had a couple of young kids on board, Captain Chris opted for a smoother, calmer route hugging the Marin coast as opposed to the choppy conditions of the Farallon Islands. We set out for a nearly two-hour run, and I was able to catch a quick nap with the added bonus of Chris’s dog, Zoe, keeping my lap warm the entire time.
Soon enough, it was time to catch some rock cod to be used as lingcod bait later that morning. We found a great spot, dropped our lines in, and started collecting bait. Rock cod fishing itself is pretty fun, and even the smaller fish can provide a good fight – so I was excited to see what lingcod would have in store for me.
Once we caught enough bait, it was time to locate some monsters and get down to business. We stopped in an area near Bolinas and rigged up our fresh-caught bait using trap rigs and 16-ounce weights. With a hook through the mouth and an exposed treble protruding from the body, my squirmy little yellow rockfish was going to be a lingcod-catching machine!
And that’s precisely what happened! Not much time passed before I felt it: tap, tap, tap…TUG!
I’ll never forget my first lingcod bite, because it was completely different than anything I had experienced before. It wasn’t erratic. My line didn’t zig-zag. It just felt like dead weight slowing trying to pull a 5’5” girl over the side of a boat. I live for this, by the way.
Determined as ever to land the thing, I planted my feet as best I could, hips occasionally banging the boat rails as I reeled in as instructed: firmly but steadily. The water was choppy, and the boat was rocking, but I managed to hang on. 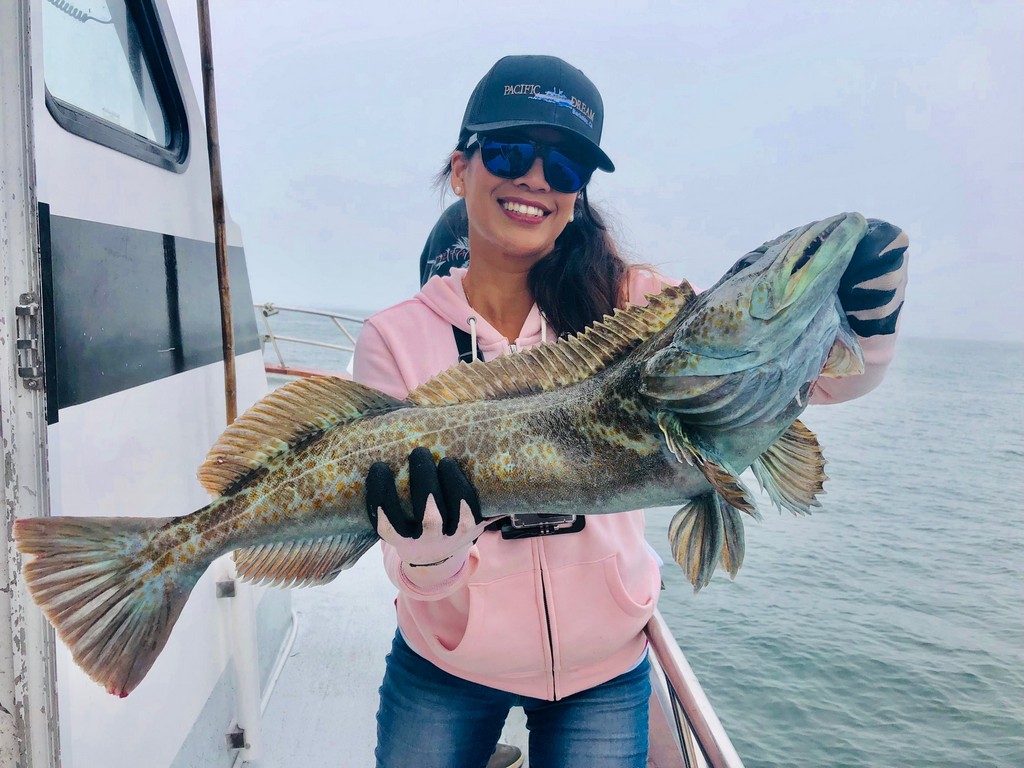 It was a two-minute fight that felt like twenty minutes. When it finally surfaced, in all of its blue-tinted glory, it was love at first sight. I hadn’t even landed the darn thing and all I could think about was getting my line back into the water and catching another one.
I snapped a photo with my catch, and learned the hard way that you don’t pick up a lingcod like you would a largemouth bass. I later read that lingcod have 18 razor-sharp teeth, although my bleeding thumb at the time also taught me that.
Back in the water my line went, and just moments later I caught the “fish” I would never land. We all know how that turned out, and it actually happened more than once. That’s the risk you take when hunting the rocky depths of the Pacific.
The bite eventually died down, so we moved onto another spot and tried a new bait – herring – and beefed up our offerings with 24-ounce weights. This combination was a game changer for almost everyone on the boat and remained as such for the rest of the afternoon. Not only was I able to hook three more lingcod, but the angler next to me pulled in a total of seven, including the largest of the day which put up such a fight it forced him to the opposite side of the boat!
By the time we started heading back to the marina I was exhausted and could feel bruises forming on my hips and where I had held the rod under my left arm all day. It was worth it, though. We ended up just under the boat limit for lingcod and I’ve got enough rockfish to make tacos for the rest of the year.
Big thanks to the crew of the Pacific Dream, although I’d like to think that cheesecake brought me at least a little extra luck that day.