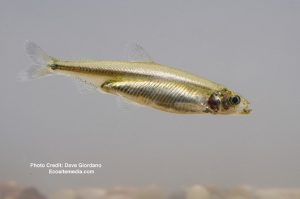 The Delta smelt, once the most abundant fish in the entire Sacramento-San Joaquin River Delta, has come closer and closer to extinction in the wild in recent years.

In the first month of the fall midwater trawl survey, September, zero Delta smelt were caught in the survey. The Delta smelt, constantly maligned by San Joaquin Valley agribusiness interests, is an indicator species, found only in the estuary, that demonstrates the health of the ecosystem.

Conservationists, scientists and anglers are hoping that this fall’s midwater trawl survey won’t be a repeat of 2018, when the California Department of Fish and Wildlife found zero Delta smelt in the months of September, October, November and December.

An array of factors are behind the demise of Delta smelt and other fish species, including toxic chemicals, pollution, changes in dam operations and invasive species, but none is more significant than the export of massive quantities of Delta water through the State Water Project and federal Central Valley Project pumping facilities in the South Delta.

In September, the CDFW also reported low numbers of longfin smelt, a cousin of the Delta smelt. The index, a relative measure of abundance, was only 11, compared to last September’s index of 13. The total index last year was 52.

Sacramento splittail, a native minnow found only in the Sacramento River and Delta, didn’t fare well this fall to date either, with zero fish reported in the September trawl data.

The CDFW caught zero splittail in 2018, a fish that was removed from the Endangered Species List under a Bush administration official with a huge conflict of interest. Unfortunately, the removal from the list was upheld after a review by the Obama administration.

Splittail were reported last in 2017, when only 2 fish were caught.

The number of striped bass, a popular gamefish that has declined along with the Delta and longfin smelt, Chinook salmon and other Central Valley and Delta fish species, over the past few decades, showed considerable improvement from last September, when the index was only 4. This year the CDFW reported an index of 84 in September.

In contrast, the Department scientists found 4 young-of-the-year stripers last September and 42 in the entire 2018 survey.

The index this September for American shad was 570, a big improvement over the 85 documented last September. The total index for 2018 was 1064.

Finally, threadfin shad, an introduced bait fish, saw an upswing this September from 24 last year to 43 this year.

I will be reporting on the fall midwater trawl results each month and then will do a longer, comprehensive article after the total 2019 survey numbers are tallied in early January by the CDFW in a summary report.

The dramatic decline of Delta smelt reported in fall 2018 continued in the spring 2019 Delta smelt 20-mm surveys, with a record low number of the smelt collected by Department scientists. (http://www.wildlife.ca.gov/…)

According to independent fisheries biologist Tom Cannon in his California Fisheries Blog on the California Sportfishing Protection Alliance (CSPA) website, the Late April and early May 20-mm Surveys “provide an excellent picture of the status of Delta smelt population in the estuary.”

“The outlook for the Delta smelt population remains grim after these lows. Despite good conditions in spring 2018 and 2019, the severely depressed number of adult spawners indicates a continuing weak potential for recovery,” Cannon concluded.

As I was reviewing the September trawl data, the San Francisco Estuary Institute had just released its annual report, “The State of the Estuary,” covered in today’s article in Marin Independent Journal: San Francisco Estuary health report offers mixed review. This report reveals that water exports from the Delta continue to harm fish species.

“To me there are two messages about the fish,” Letitia Grenier, senior scientist with the San Francisco Estuary Institute, told reporter Will Houston. “One is that people in the Bay Area cannot pretend that all this stuff in the Delta doesn’t matter to you. It does. All of the problems in the Delta are affecting the full ecosystem and it’s not like there is a magical wall that is separating the Delta and the bay.”

“Part of the impacts to fish may be coming from the lack of freshwater flowing into the bay from the Sacramento-San Joaquin watershed. Chronic drought conditions in the estuary have persisted because of human development and agricultural operations, with dams and water diversions blocking the water from entering the bay. The report states the four lowest flow data points recorded over 79 years have occurred in the last decade: 2009, 2010, 2016 and 2018,” Houston wrote.

To view the full report and executive summary, visit sfestuary.org.

The Fall Midwater Trawl Survey (FMWT) has sampled annually since it’s inception in 1967, with the exceptions of 1974 and 1979, when sampling was not conducted. The FMWT was initiated to determine the relative abundance and distribution of age-0 striped bass (Morone saxatilis) in the estuary, but the data has also been used for other upper estuary pelagic species, including delta smelt (Hypomesus transpacificus), longfin smelt (Spirinchus thaleichthys), American shad (Alosa sapidissima), splittail (Pogonichthys macrolepidotus), and threadfin shad (Dorosoma petenense).

The FMWT samples 122 stations each month from September to December and a subset of these data is used to calculate an annual abundance index. These 122 stations range from San Pablo Bay upstream to Stockton on the San Joaquin River, Hood on the Sacramento River, and the Sacramento Deep Water Ship Channel. Sampling takes approximately 9 days per month to complete.