Fall trout fishing is exploding throughout the Sierras and things are starting to pop in the foothills too at places like Collins Lake and New Melones. My most recent trout fishing adventure took me to Lake Davis.
Davis has a long and storied history as a trout producer and of course a lot of drama surrounded Davis due to the introduction of northern pike and the subsequent multiple poisonings of the lake.
Well the pike are finally gone and robust trout plants have rebuilt the fishery. Is it as good as it was back in the ‘70’s? I have no idea as I spent more time in the early ‘70’s watching Sesame Street than I did trolling for trout, LOL! 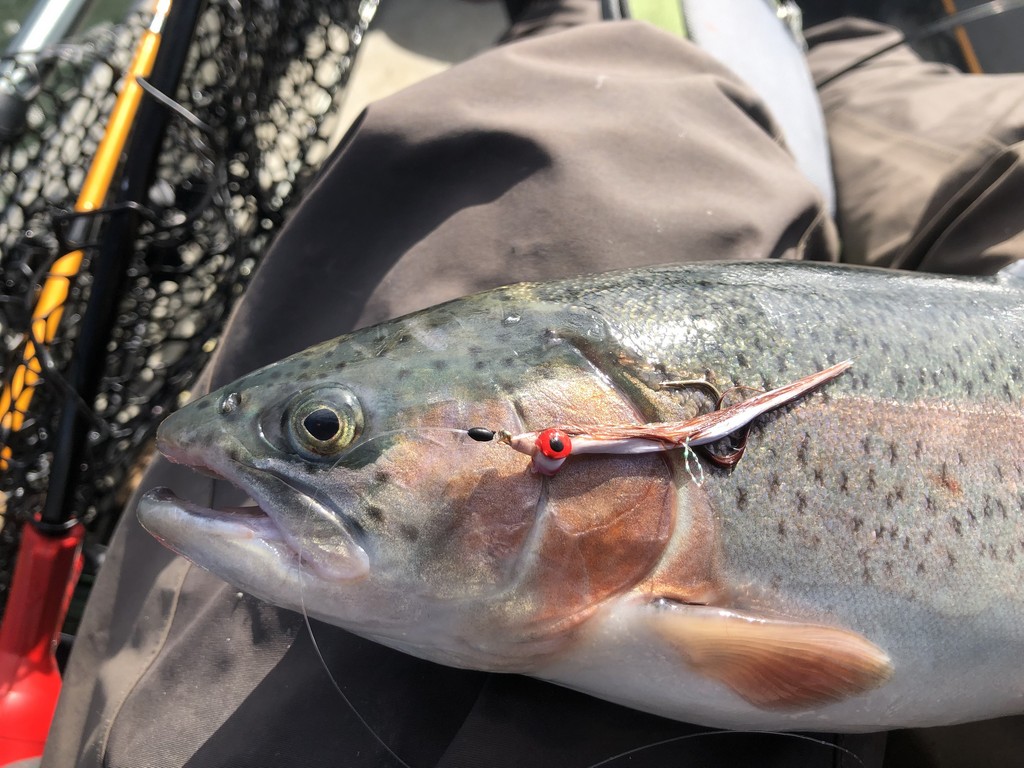 Having said that the trout fishing that exists at Davis these days is pretty darn good. There are big numbers of 14 to 16 inch rainbows to be caught and the occasional 4 plus pound 24 plus incher shows.
Fall is one of the best times of the year to intercept large trout in Lake Davis’s buggy, weedy waters and that’s why I headed there on October 3 and 4. While I didn’t get anything huge I got big numbers of fish. In all I brought more than 50 trout to the net and lost at least a couple dozen more.
The trout were holding in the top 15 feet and I worked them hard with my hybrid leadcore outfits.
I caught fish on Cripplures, Eel Spoons, Dick Nite Spoons, grubs and flies, but flies were the hands down best offering for me. I got fish on both Arctic Fox Trolling Flies in tui chub and orange colors and on my own signature series lead eye marabou trolling flies in white/brown and pink/brown.

In fact, three of the largest trout of the trips, rainbows weighing about 3 pounds all came on my marabou white/brown flies trolled within the top 5 feet of the water column.
I continue to be blown away by how effectively I can troll for trout from my Hobie Pro Angler 14. The craft is super stealthy and efficient, allowing me to target trout in shallow water and to peddled long distances for several hours at a time.
At times, actually much of the time I was at Davis, the wind was blowing hard, yet the Pro Angler was up to the challenge. Despite the fact that I had white water breaking over the bow several times I felt safe and kept right on hooking fish. As it often does, the rougher the surface became the better the bite got and it was nice being able to stay out on the water and enjoy near wide open fishing!
I’ll be back at Lake Davis soon, hoping to catch something in the 24 plus inch class, but before that I’ll likely be hitting Lake Almanor looking to eclipse my personal best 7 pound rainbow that I landed last October!