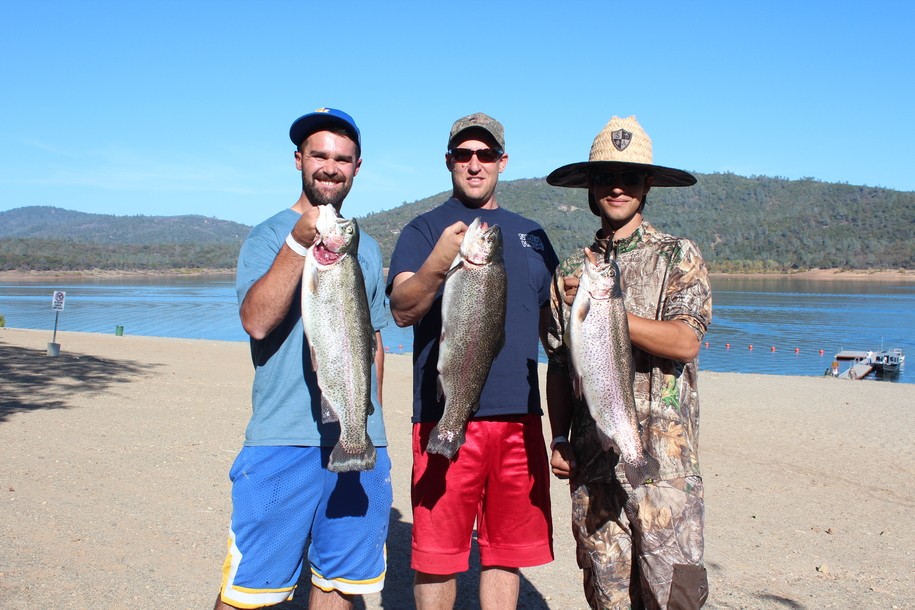 Rob Cetinich of San Jose had a fantastic day on November 3 when he won first place in the adult division of the two-day NorCal Trout Anglers Challenge (NTAC) event at Collins Lake by landing the largest fish, a 7.92 lb. rainbow trout.

He caught his fish, one of three over 7 pounds landed by participants in the event, while trolling in the middle of the lake with Speedy Shiner lures at 30 feet deep. Fishing with him were his brother, Eric, and his grandfather, Bob Schmidt.

“My brother told me he had never seen a trout caught while trolling. Well, ten minutes later, the big fish hit my lure and he netted the fish. It popped out of the net once, but he scooped it back in,” said Cetinich

Not only did Cetinich catch the biggest fish, bit he won a 14-foot Tracker boat, Mercury motor and trailer package from Gone Fishin’ Marine in Dixon during a drawing of the top 10 adult winners.

“This was perhaps the most exciting Tournament of Champions we have had over the past 6 years,” said Vince Harris, President of Angler’s Press Outdoors. “We never have seen such big fish caught at a championship event, let alone a season event. We look forward to opening day, February 8, 2020, at San Pablo Reservoir.”

Joey Hill Sr. placed second in the adult division with a 7.84 lb. trout that he landed while trolling. 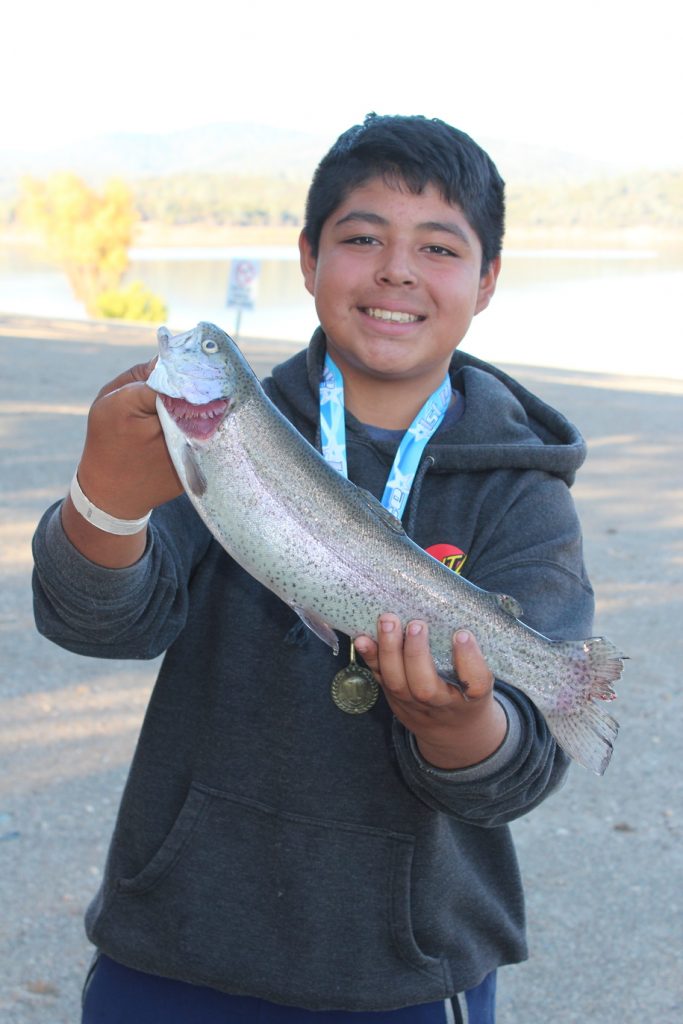 Lucinda Witte placed third in the event with a 7.38 lb. rainbow that she bagged while trolling with a red Rapala on the lake’s west side.

Moises Blanco won first place in the youth division with a 2.07 lb. rainbow trout. He was bait fishing on shore with his brother, Angel Blanco, who

Avery Edison finished second with a 2.01 lb. rainbow, while Makyla Smith finished third in the youth division with a 1.99 lb. rainbow trout. 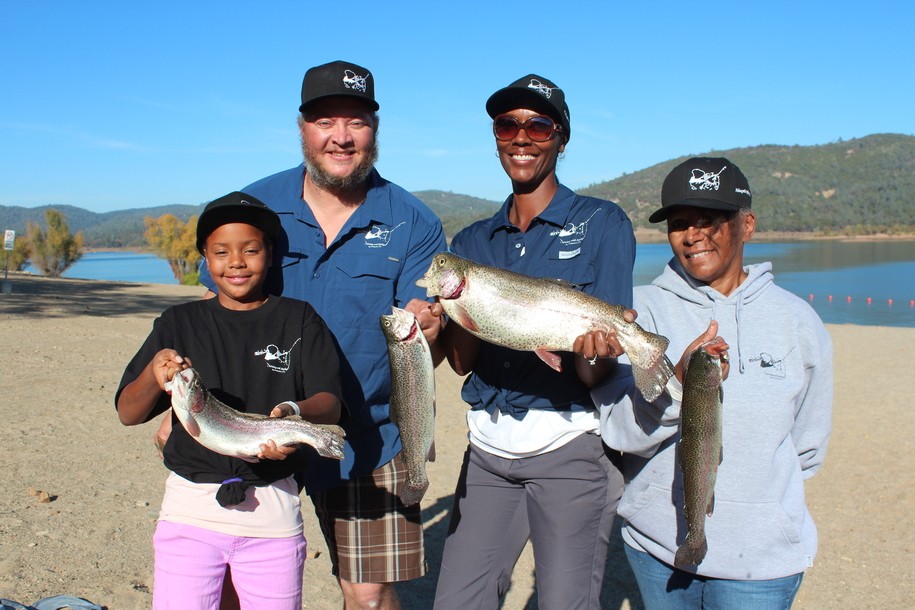 The Tinsley Family – Aniyah, Fred, Tisha and Sabrina – reported a total of 22 trout during the two days. They caught their rainbows while trolling with broken back Rapalas.  Tisha Tinley came in ninth in the adult division with a 4.56 lb. rainbow, while Aniyah Tinsley captured eighth place in the youth division with a 1.63 lb. trout.

Jeff Garcia of Stockton won the Angler of the Year Award during the awards ceremony. Anglers at the event also won $100 plus a tackle box filled with Rooster Tail lures and an award from Daiwa.

Nestled in the beautiful Sierra Nevada foothills, just over an hour northeast of Sacramento between Marysville and Grass Valley, Collins is a 1600-acre lake and recreation area with 12 miles of shoreline. Collins receives large rainbow trout plants in both the fall and spring.

The NTAC is presented by Angler’s Press Outdoors and hosted by Gone Fishin’ Marine. Lasher Elk Grove, the Fish Sniffer magazine and Daiwa. 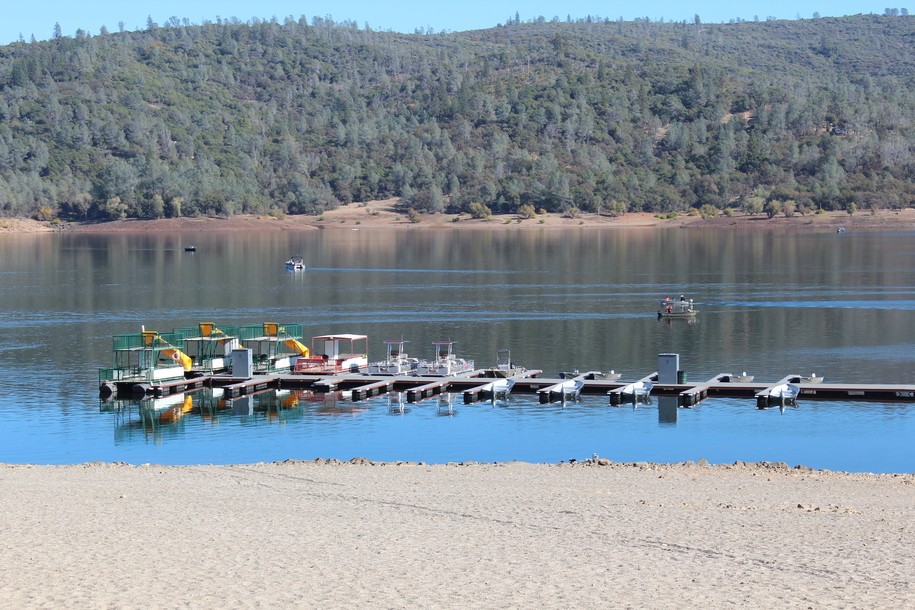 Collins Lake, located on Dry Creek, a tributary of the Yuba River, features 12 miles of shoreline located in the beautiful Sierra Nevada foothills.

More than 50,000 rainbow trout are planted in Collins every spring and fall, meaning that Collins Lake has the largest private planting program north of Sacramento.

Thousands of these trout are trophy- sized, planted at 3 to 8 pounds and growing even larger.

The resort, in cooperation with the CDFW, Kokanee Power and CIFFI, has also sponsored a successful pen-rearing program to enhance the trophy trout fishery at the reservoir.

The CDFW puts the trout in the 12 floating pens at a size of 2/3 lbs. each November. When they are released in increments between mid-March and the end of April, they range from 2-1/4 to 3 pounds. This year the net pens will be filled on November 19 by the CDFW, assisted by lake staff and local volunteers.

“They’re beautiful fish with full fins that look much more like native or holdover trout,” said Lincoln Young, manager of Collins Lake Resort. “Since they’re already acclimated to the lake’s waters, they’re brightly colored, their flesh is firmer and they fight harder than recently planted trout.”

The CDFW planted brown trout in previous years, but they haven’t stocked browns for over 8 years.

Trout grow big and fat in Collins, feeding heavily on the lake’s abundant threadfin shad and other forage. Rich Moore set the lake rainbow record of 14 pounds, 3 ounces in May 2009. The lake brown record, set in 1991 by Bill Clutter, is 9 pounds. 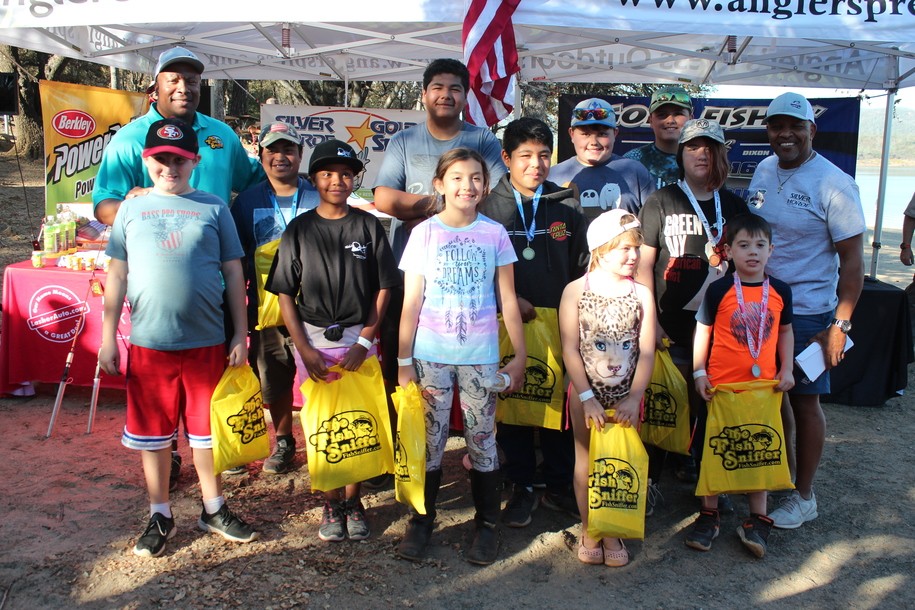 “Spotted bass are the most abundant bass in the reservoir,” said Young. “We see good numbers of 4 to 5 pounders and fish up to 7 pounds every year. Over the years, we’ve weighed in a dozen spotted bass over 8 pounds.”

Channel catfish also offer an excellent fishery at the lake throughout the year, with the best action generally available during the summer and early fall months. The lake catfish record, set in 2008, is 24 pounds.

To supplement the bass and panfish fishery, Young and the lake management in the past have stocked the lake with Alabama spotted bass, black crappie, bluegill and redear sunfish. “We plant the fish at the size that they can spawn that season,” Young noted.

The lake crappie record of 3 pounds, 4 ounces was set by Probhat Palma in October 2012,.

In addition to replanting the reservoir with warm water fish, they also have conducted their own habitat enhancement project every 6 to 8 years to rebuild the lake’s food chain from the bottom up.

“A positive aspect of the recent drought is that it exposed the shoreline and allowed brush to grow around the lake,” said Young. “When the lake filled after the drought with the rainwater, it inundated the brush, providing good habitat for juvenile bass and sunfish to feed and hide from predators.”

Location and Size: The recreation area, located at 1200 feet in elevation, covers about 1,600 acres when full and features 12.5 miles of shoreline. Collins Lake is about 1-1/4 hours northeast of Sacramento and about 30 minutes east of Marysville.

Boating: The water ski season runs from May 15 through September 30. Jet skis and small personal watercraft aren’t allowed on the lake. A double wide concrete launch ramp with a dock and a full-service marina with moorage and boat rentals are available.

Fishing Access: Collins Lake provides outstanding access for shore anglers and campers. Shore anglers find success while fishing along the dam, on the west shore and around the bridge on the river arm.

Camping: A safe and clean family campground includes hot showers and laundry, RV hookups and tent campsites. The campground is patrolled by security and emergency medical personnel are on call. Groups are welcome. Rates vary on time of year and amenities provided.