If you are a serious angler, getting skunked from time to time is part of the game, but you don’t have to like it!
A few weeks back I attended the Norcal Angler’s Challenge Trout Tournament at Collins Lake. During the event, multiple rainbows in the 4 to 8-pound class were brought to the weigh in. Seeing those big trout, prompted me to come back to the lake two days later with my Hobie Pro Angler kayak in tow.
Conditions were perfect and anglers were catching fish, but I just couldn’t get hit. I trolled a long list of lures and tried soaking bait for zero results. I left the lake that day, scratching my head and licking my wounds. I don’t mind a tough bite, but I hate getting skunked, especially when guys are hooking fish all around me!
Fast forward to this week… The skunking was still gnawing at me, so I decided to run back up to Collins Lake in hopes of evening up the score.
I arrived at the lake by 6:30 am and had the Hobie in the water by 7. I started out trolling down the west shoreline and across the face of the dam. Near the dam a power boater fishing next to me hooked and landed a rainbow that looked to be about 3 pounds and I still hadn’t gotten a strike. Oh no it was happening again!
At the eastern corner of the dam, I made a left turn, angled across the main body and trolled offshore of the swim beach, heading towards Elmer’s Cove still without a strike.
Remembering a November day about 20 years ago when my wife Gena landed a 24-pound limit of Collins Lake rainbows while fishing PowerBait and salmon eggs in Elmer’s Cove, I decided to look around for some trouty looking marks on the Lowrance. 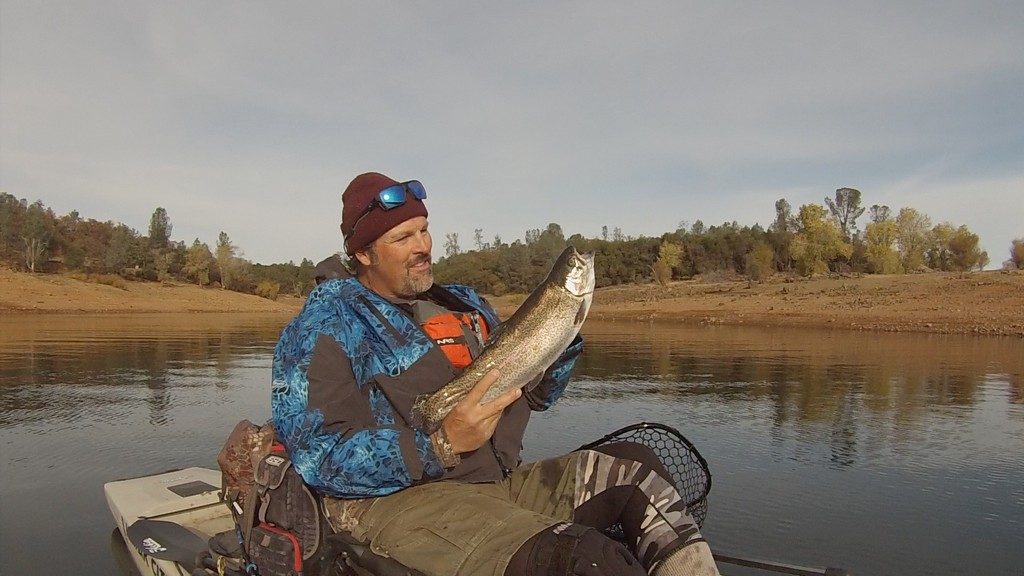 When I found some promising arches near a buoy at the back of the cove, I decided to give bait fishing at try. I snapped onto the buoy and broke out one of my new signature series spinning rods. I’d been testing the 6’6” rods for over a year and had found them ideal for trout fishing with both baits and lures.
I baited a Carolina style trout rig with a quarter inch ball of rainbow PowerBait and sweetened it with some anise krill Pro-Cure. The kayak was sitting in about 25 feet of water. I tossed the bait up into water that I figured to be about 8 feet deep. I sat the rod down, broke out a soda and proceeded to check emails on my IPhone.
Five minutes passed, then 10. I decided to move the bait into deeper water. I reeled up the slack, lifted the rig and let it drop. Waited 10 seconds, reeled, lifted and dropped again…. That’s when things got interesting!
I felt the light tug of a trout picking up the bait. I dropped the rod tip and opened the bail on the reel. The fish moved away slowly, stopped for a bit and then moved away with more speed. I allowed the trout to run a few feet, closed the bail, tightened the line and drove the hook home…. Fish On!
At first the fish didn’t react much and I had no idea how big it was. Working the reel and using the leverage my rod provided I moved the fish off the bottom and it started coming toward the kayak.
Looking into the water I could see a cable with a big chain attached to it. A beat later a massive looking trout materialized right next to the cable and my heart went into my throat. If the trout turned the wrong way and my 8-pound mono grated along the cable it would be bye bye rainbow!
With the rod loaded against the trout I managed to pressure fish away from the cable and that’s when it really came to life, head shaking and making short runs before it boiled to the surface.
The trout was on top, but the fight wasn’t over. The rainbow continued to head shake violently, tossing up lots of white water, while keeping its head down and staying out of net range.
After a minute that felt like an hour, I was able to slide the big trout into the net. I was elated. The massive football shaped rainbow was well over 5 pounds. What and incredible slump buster!

I’m particular about the rods I use for trout fishing and I spent about a year finding what I consider to be an ideal spinning rod for my style of trout fishing. I wanted a rod with a medium fast action and a cork grip. It had to have a sensitive tip, followed up with enough back bone to handle big fish.
I wanted a rod that wasn’t too short or too long. I wanted a two-piece rod for easy transport. I wanted a fiberglass rod because I wanted it to be rugged and I wanted a rod rated for 4 to 10-pound test that would handle sinkers and lures that weighed up to a half ounce.
Finally, I wanted a rod with a REALISTIC price that I could offer to Fish Sniffer readers and viewers of my YouTube Channel. I see guys all the time soaking PowerBait on spinning rods that cost $100, $150 and even $200…. Wow!
What I’ve come up with is a 6’6” two-piece composite fiberglass rod, with a medium fast action. It has plenty of sensitivity in the top third and plenty of power in the lower two thirds. It has a cork grip and is rated for 4 to 10-pound line. It works great with lures and sinkers in the 1/8 to ¼ ounce range, but it will easily handle weights of up to a half ounce… The rod retails for $50!
Do you want a trout spinning rod that flat out performs, without braking the bank or emptying your wallet? If the answer is yes, visit my online store at www.fishhuntshoot.com.