When the leaves begin to change, the days get shorter, nights get cooler this is my cue to get the kayak up to the Sierras before the snow comes and closes it off for the winter.
I’ve been on two different trips recently, both of which my focus was to explore new water and see what I could find swimming around. I focused my search on lakes north of highway 80, first stop was Boca Reservoir.
They are doing a ton of work to the dam there and have the lake drained down pretty low, but you can still drag a kayak down to the shore and launch.

I pedaled around for a few hours and caught a few small kokanee and a rainbow trout, trolling a Wild Thing dodger with a worm trailing a foot or so behind.

Looking back now I’m wishing I would have put in a little more time here searching for bigger fish, but I was too excited to get to Stampede. I’ve heard of big fish coming out of Stampede, and the recent addition of the Pilot Peak strain of cutthroat spiked my interest even more. 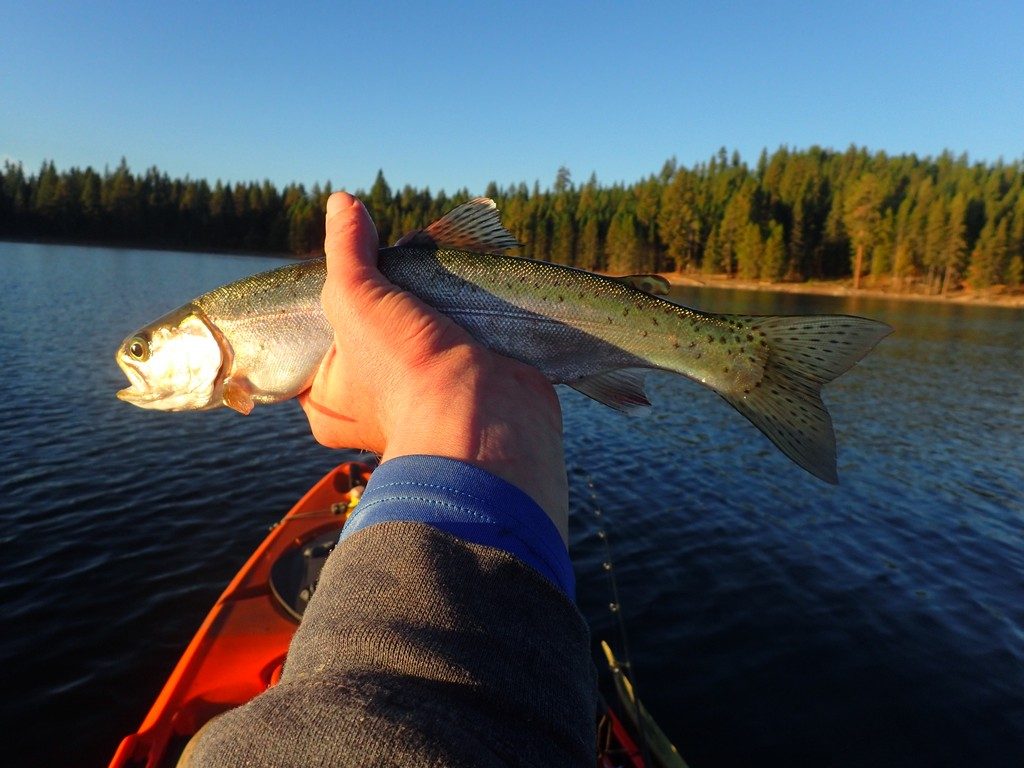 I found a spot to setup camp for the night and went out for an evening cruise in the kayak. In the short time, I fished I caught a smallmouth, kokanee and a small cut, with that variety and in such a small area and amount of time I was looking forward to the morning!

On the water before sunrise and making a couple mile trek to one of the inlets, I thought it was strange the wind was picking up so quickly. I had about an hour of decent fishing, landing a few small kokanee, a nice 14” smallmouth and a small rainbow. I was trolling the dodger and worm on top with one rod and leadcore-line with a broken back Rapala on the other, both setups caught fish.
After that golden hour, the fan turned on full speed and it was whitecaps over the bow all the way back to the launch. Helped a couple of power boaters get their boats on the trailers with a nasty cross swell pounding the ramp, then I loaded my stuff up once again, and thought now what? 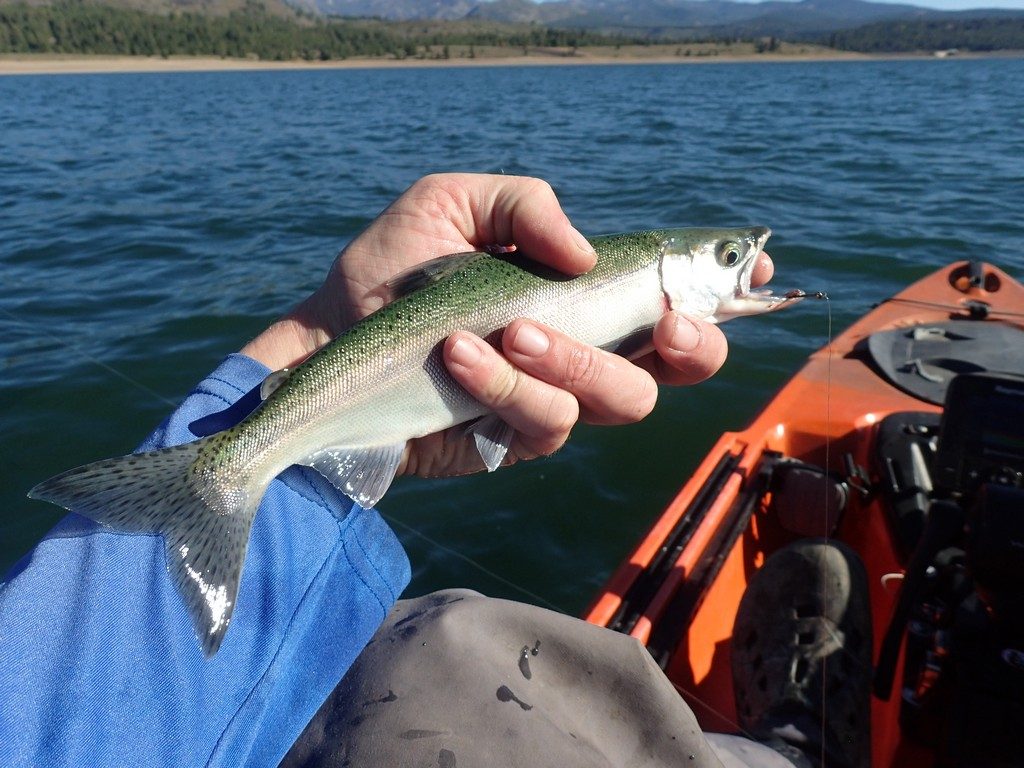 Well I was out to explore and figured there was one more spot close by that I had never visited, so left Stampede and made my way down the hill towards Prosser Creek Reservoir. Not the most scenic lake I’ve come across but was very thankful not a whitecap was in sight!

I got on the water as fast as I could, my time before I had to head home was ticking away quickly. Casted a Shad Rap behind me, I started to troll my way out to the main lake. I didn’t make it 50 yards and had a spunky rainbow on the end of the line. I continued to troll around and picked up a few more cookie cutter rainbows here and there before it was finally time to head back home. 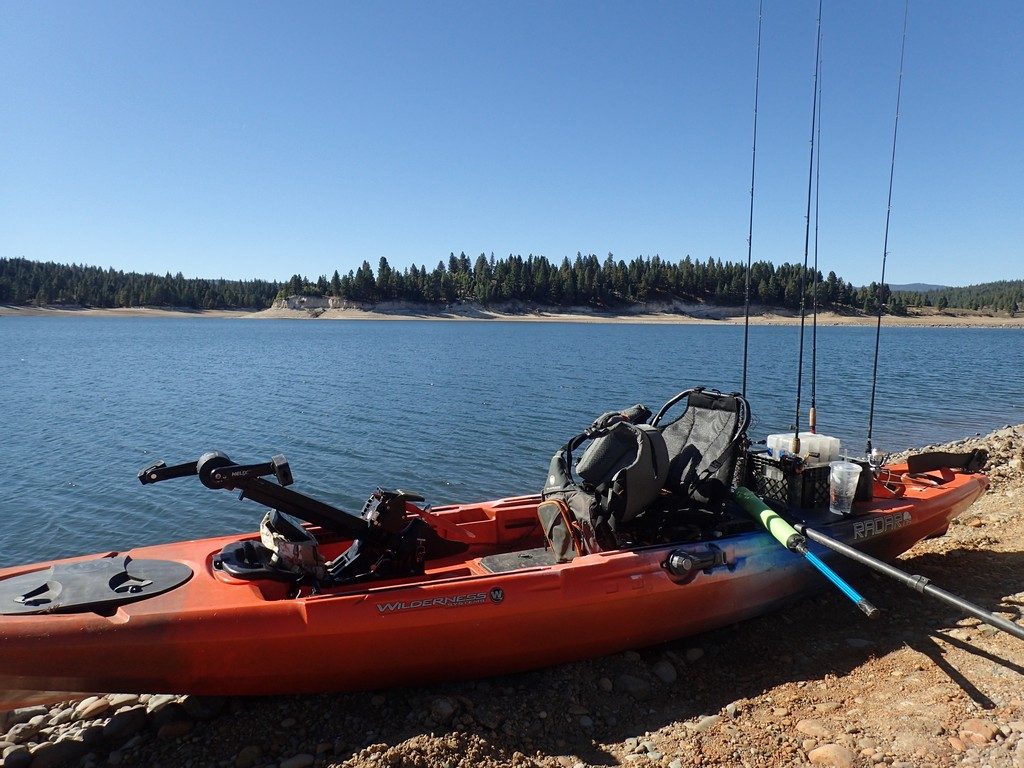 All in all, I had a great time exploring 3 new lakes, put the Radar 135 to the test in some gnarly wind (handled it great), and even got to catch a few fish. I am really looking forward to getting back to Stampede over the next few years and see the progression on the cutthroat. The small bait is present for them to grow. I can’t wait till they get big enough to start eating kokanee and really start packing on the pounds!