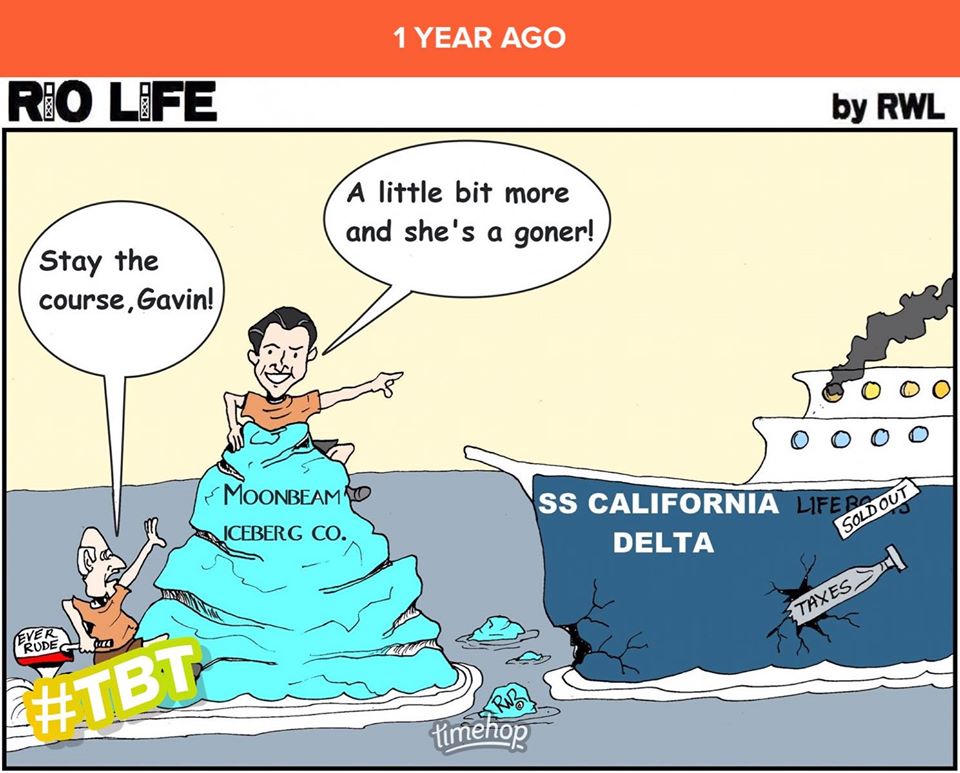 R.I.P. Robert Light, the Delta cartoonist whose Rio Life was published regularly in the Rio Vista River News, recently passed away. He spoke truth to power. He predicted exactly what would happen when Gavin Newsom won the election for Governor in November 2018. We remember his fearless truth telling.

As Light predicted in a cartoon one year ago, Governor Gavin Newsom has continued Jerry Brown’s Delta water and fish policies, albeit with a few changes, some for the worse.

He refused to reappoint Brown’s best appointee, Felicia Marcus, as Chair of the State Water Resources Control Board at the request of his Big Ag buddies, after the Board under her leadership voted for more water in the San Joaquin River for salmon and steelhead and the Delta.

He reappointed two of Brown’s worst appointees, Department of Fish and Wildlife Director Gavin Newsom and Department of Water Resources Director Karla Nemeth, rather than appoint somebody that would stand up for fish and our environment.

He continues to support the environmentally destructive voluntary agreements promoted by corporate agribusiness, rather than do the right thing and supply required flows for fish in the Central Valley and Delta.

He vetoed SB 1, a bill that would protect fish and wildlife from the gutting of the Endangered Species Act, the Clean Water Act and other laws under the Trump administration.

He created a new “agricultural liaison” to the Governor’s Office filled by Mike Lyons, a San Joaquin Valley grower opposed to more flows for fish.

Most recently, Newsom’s administration released a draft environmental impact report (EIR) for the State Water Project longterm operations that actually increases water exports to both the state and federal projects.

While Newsom’s staff are easier to meet with and “nicer” to talk to than Brown’s staffers, the essential facts are the same: Newsom, like previous governors, is a servant of corporate agribusiness and other Big Money interests.

It is no surprise why Newsom is so under the thumb of Big Ag; Governor Newsom received a total of $755,198 from agribusiness in 2018, based on the latest data from www.followthemoney.org. That figure includes $579,998 in the agriculture donations category, combined with another $116,800 from Beverly Hills agribusiness tycoons Stewart and Lynda Resnick, owners of the Wonderful Company and the largest orchard fruit growers in the world, and $58,400 from E.J. Gallo.

By vetoing SB 1, supporting the voluntary water agreements backing the Delta Tunnel, hiring grower William Lyons as a special “agriculture liaison” to the Governor’s Office and then overseeing the issuing of a new draft EIR that increases water exports for the state and federal projects rather than reducing them and his other pro-agribusiness actions, Newsom is apparently bending to the will of his agribusiness donors.