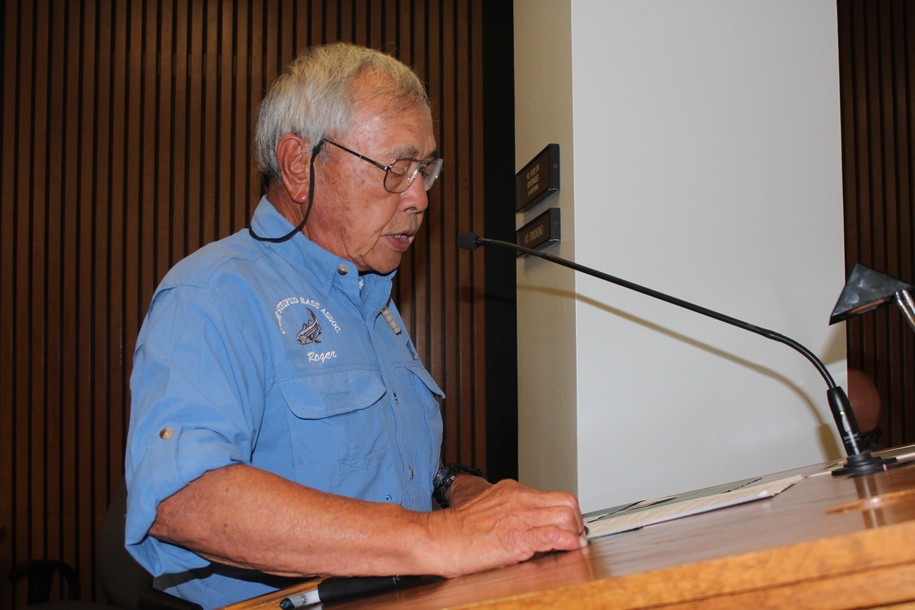 All anglers are reminded that their presence is urgently needed at the California Fish and Game Commission meeting on Wednesday, December 11, at 9:30 at the Resources Building on 1416 Ninth Street in Sacramento. The California Striped Bass Association, West Delta Chapter, the Nor-Cal Guides & Sportsmen’s Association (NCGASA), the NCGASA Delta Anglers Coalition and other groups are mobilizing people to attend the meeting to make sure that the Delta fishery management policies being proposed continue to protect striped bass, black bass and other gamefish.

On August 7, the California Fish and Game Commission at its meeting in Sacramento on August 7 directed staff to continue working with CDFW and stakeholders to revise a draft Delta fisheries management policy, including potential revisions to the existing striped bass policy.

“The Commission may adopt a Delta Fishery Management Plan and alter the Striped Bass Policy,” said Roger Mammon, President of the California Striped Bass Association, West Delta Chapter. “As currently written, it targets striped bass and black bass and could eliminate current regulations protecting this important fishery. We need all fishermen and women to attend the meeting.”

“This effort is being spurred by a coalition of water contractors south of the Delta, led by Stewart and Lynda Resnick’s Coalition for a Sustainable Delta. CSBA is arranging bus transportation as we need a strong presence letting the Commission know we are opposed to this scheme perpetrated by outside of the Delta interests,” said Mammon.

Mammon noted that the California Department of Fish and Wildlife’s 2019 fall midwater trawl in September, October and November produced zero Delta smelt and the lowest-ever recruitment of young-of-the-year striped bass.

“This is our last chance to advocate for the fight to save our striped bass and largemouth bass in the Bay, Delta and rivers in Northern California,” said James Stone, President of the Nor-Cal Guides & Sportsmen’s Association (NCGASA.org). “We need your support. Please help by attending. Please invite anyone you know. We hope to see you there.”

The Delta Fisheries item is #9 on the Commission’s agenda. Show up at 9:30 sharp and come support our fisheries. “If we don’t show up, then we will lose it all.,” said Stone, “This is the last chance to save our fishery.”

Please attend with your photo I.D. in hand when you enter the building. For more information, go to: NCGASA.org

Below is my article on the August Fish and Game meeting.

After listening to several dozen speakers from the California Striped Bass Association, NCGASA Delta Anglers Coalition, Nor-Cal Guides & Sportsmen’s Association and other organizations, the California Fish and Game Commission at its meeting in Sacramento on August 7 directed staff to continue working with CDFW and stakeholders to revise a draft Delta fisheries management policy, including potential revisions to the existing striped bass policy.

The policy will be again discussed at the Commission meeting on Wednesday, December 11, at 9:30 AM at the Natural Resources Building Auditorium, First Floor, 1416 Ninth Street, Sacramento CA 958124.

Before the unanimous Commission vote, President Sklar said, “I understand the role of stripers in the ecosystem… I move to postpone this issue until the December 2019 meeting.”

Fish advocates say that the Coalition is concentrating on “predation” to divert attention from the main culprit in the dramatic decline of winter Chinook salmon, Delta smelt, longfin and other fish species — the massive export of northern California water south of the Delta.

“As far as today goes, I’m glad they’re willing to bring the discussion back to Sacramento,” said David J. Ostrach Ph.D., Chief Scientist Ostrach Consulting, a leading scientific expert on striped bass and Delta fish species. “That is unlike like the kangaroo rat decision today where they were dealing with a Southern California issue up here.”

However, he said he was concerned about the California Department of Fish and Wildlife (CDFW) preparing the bibliography. “I’m hoping that they will be all-inclusive and not bias it,” said Ostrach.

In his testimony before the Commission, Ostrach said:

“I am Dr. David Ostrach ,Science Advisor for the Allied Fishing Groups and Nor-Cal Guides & Sportsmen’s Association representing collectively 40 thousand fishers and recreational fishing related businesses. I am a Fisheries Research Scientist, founder & former director of the Pathobiology, Conservation & Population Biology Laboratory at UC Davis. I have studied the collapse of the fisheries in the San Francisco Bay Estuary ecosystem for 32 years at U.C. Davis and with my consulting firm. I was one of the original 5 scientists chosen by the IEP to investigate the Pelagic Organism Decline. I am an expert in determining how multiple stressors affect aquatic ecosystems and fisheries collapses. I am one of the state’s experts on the striped bass fishery. I have provided scientific testimony for this commission numerous times over the past decade and when I appeared before you in June. I’m hoping you have reviewed those materials and continue to use them and the best available peer-reviewed science when moving forward with potential fishery management policy changes.

I was encouraged by director Bonham’s statements at the last Commission meeting indicating there would not be a repeal of the 1996 striped bass management policy but rather it and the proposed Delta fishery management policy may need some tweaking and that both policies would be moving forward. I have seen some of the potential language changes proposed for both policies and I have concerns. I would be happy to work with commission and CDFW staff on language in the policies such that we can come up with policies that are based on science, logic and that would protect and help to restore all of the estuaries once great fisheries and endangered species. Endangered and listed species need to be priority in managing the estuary. However, that should not include vilifying species like striped bass and black bass blaming them for the collapse of the fisheries for which there is zero scientific evidence.

Those supporting the proposed management policy change which would likely deregulate the striped bass and black bass sport fisheries is another back door attempt by water contractors to distract attention from the problems responsible for the fishery and ecosystem’s collapse caused by the water projects. The manner in which the State and Federal projects are operated, the removal of more than 50% of the ecosystem’s water, contaminants, loss of habitat and multiple stressors is what scientific experts have determined is responsible for the collapse of the estuary, salmon populations and listed species.”

Another scientist, Deirdre Des Jardins of California Water Research, also spoke about how the striped bass itself is a major victim of California water policy, not a cause of the collapse of winter chinook salmon and other endangered species.

“The Striped Bass are part of an assemblage of pelagic fishes in the Delta,” said Des Jardins. “The populations of all pelagic fishes in the estuary have crashed.  Major new research from UC Davis shows that one of the causes is that the state and federal water project reservoirs are holding back water in the spring and releasing it in the summer.”

“The cold, blue water from the reservoirs washes the plankton into the pumps. The evidence suggests that if the projects returned to pre-1995 operations that reduced exports to protect Striped bass spawning in the summer, the estuary would be significantly healthier,” concluded Des Jardins.

Jim Cox, a retired charter boat captain and President of the State Board of the California Striped Bass Association, told the Commission about the importance of striped bass in the California recreational fishery and the Delta and coastal economy.

“I have a 4 year old grandson,” said Cox. “When he is old enough to ride his bike down to the river and try to catch a striped bass, will there be any stripers left for him to catch? We are relying on you to make that happen. We have put our faith in you to make the decisions that will protect all fish in the delta. Please do not let us down.”

Before the meeting the Coalition for a Sustainable Delta reported on its Facebook Page, “The Fish & Game Commission is discussing a new Delta fisheries management policy and repeal of an outdated striped bass policy. We are encouraged by the work thus far and hopeful for the eventual adoption of a sensible Delta management.”

During the meeting, the Commission also began the regulatory process to ban possession of live nutria, a large, brown, fur-bearing, aquatic rodent native to South America. CDFW is seeking a regulatory change from the Commission in order to prevent further spread of this persistent invasive species. In California, nutria pose a significant threat as an agricultural pest, a destroyer of critical wetlands needed by native wildlife, and a public safety risk as their destructive burrowing jeopardizes the state’s water delivery and flood control infrastructure.

The Commission said the “CDFW has a robust detection and eradication effort underway in the Sacramento-San Joaquin Delta in order to limit the invasive rodents’ spread and impact on California’s most important water resource and the heart of the state’s water delivery and infrastructure.”

The Commission also determined that listing San Bernardino kangaroo rat as threatened or endangered under the California Endangered Species Act may be warranted. This commences a one-year status review of the species and the Commission will make a final decision at a future meeting. During the status review, the San Bernardino kangaroo rat is protected under CESA as a candidate species.

The full Commission agenda for this meeting along with supporting information is available at www.fgc.ca.gov. An archived video will also be available in coming days.