My cousin Michael and I had reserved spots aboard the Gatecrasher well ahead of sturgeon season. Our Sunday finally came, and we met at the Pittsburg Marina, wide-eyed and toting enough food to feed an army.
It was a gorgeous, clear morning, and by 7:30 am we were off and running towards Grizzly Bay. Once anchored, we were politely quarantined to the cabin of the 28-foot Farallon while Captain Zack Medinas and Deckhand Virginia Salvador started preparations.
“It’s for your safety,” Virginia advised with a grin. Zack attached a cheesecloth bundles filled with salmon roe to the hooks, and Virginia masterfully catapulted them into the air, strategically placing lines from ten different rods. That accuracy comes with a lot of practice and is no easy feat considering there are 20-ounce sinkers at each ends of each line.
“My guess is that we’re in here because Zack wants to protect his secret recipe,” Michael laughed. “He’s taking it to his grave!”
Once we were all set up, we were allowed back on deck. 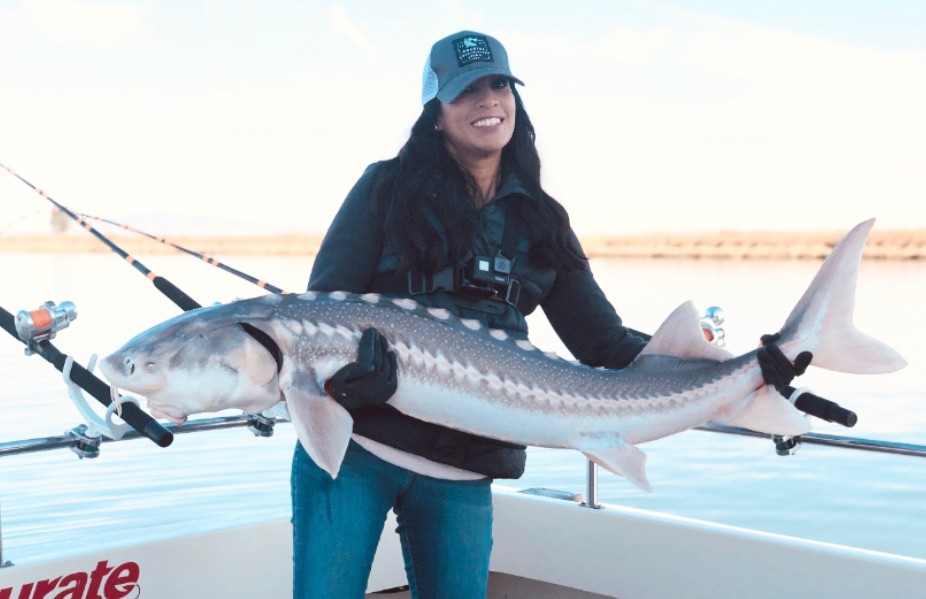 I had just started digging into some smoked salmon my cousin had brought on board for our trip when I heard the captain yell.
“Rod four! STACY, YOU’RE UP!”
Cracker crumbs flew out of my lap as I shuffled as quickly as I could towards the starboard side of the boat. The tip of a rod in the back corner went from a gentle flick to a full on bend, so out of its holder it came and the battle began.
This fish was, in a word, ANGRY!
I was forcefully pulled to the right, and nearly everyone on the boat pitched in by removing seven other rods out of their holders and lifting them out of the way to avoid a tangled-up mess. When I could, I planted my feet in attempt to gain some semblance of control. Other times, I felt I had no control. This fish was hooked, and it definitely wasn’t happy about it.
Sixty seconds later, it had me cornered – the right side of my body was up against the cabin, so I had nowhere to go. Virginia swooped in and coached me through the rest of the fight, adjusting my drag when necessary and reminding me to use proper body form to regain control.
“When it runs, you let it run,” Virginia instructed. “Hold it, and keep your 90-degree angle to the boat…it helps guide where the fish can fight.”
“Then, you’re going to reel down to the water, and use your weight to get the rod up to your shoulder. Use more of your squat than your back.” I knew my years of weight training would eventually pay off! The last thing I wanted to do was lose this fish.
“A lot of guys try to strong-arm these fish,” Zack added. “For some reason, women know to plant their feet and use whole upper body as leverage.” 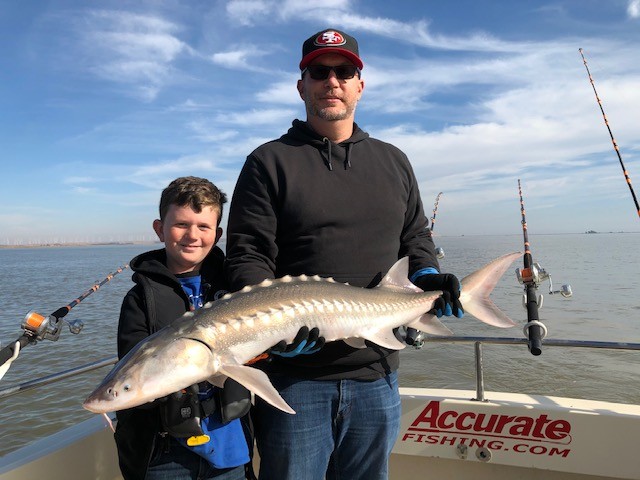 After a few more minutes of this rhythmic pumping action, we all saw color and I breathed a sigh of relief and accomplishment. This was my bucket list fish for 2019, a goal I had set for myself after chatting with Virginia and Zack at the International Sportsmen’s Expo back in January.
I looked at Virginia and exclaimed, “Now I know why you love this so much!”
We all got a good look at my beautiful sturgeon once Captain Zack gently placed it on the deck. It was 50 inches, caught in roughly 50 feet of water, and every bit of 50 pounds. Its head was as hard as a turtle shell, and the diamond markings were just breathtaking. “This one is about 20 years old,” Zack stated.
A good photo is always key, so Zack helped me get into proper position; after all, a 50-pound sturgeon is not something you want to drop onto the deck of a boat. Shots were taken, then we released the beautiful specimen back into the Delta.
Ten minutes later, my cousin was giggling at me.
“You’re still shaking!” I looked down, laughing at my arms, which were spasming involuntarily. This is why I fish!
Once everything settled down, Zack fired up the gas grill at the bow of the boat and started cooking up chicken and tortillas. We had a nice spread with street tacos, chips and dips, and key lime pie. Not a bad spot for a Sunday picnic!
Stuffed, I retired to the cabin to learn why Zack feels so strongly about catch and release when it comes to sturgeon.
“There’s such an overabundance of other sustainable fish to eat out here,” he said. “What a lot of people don’t know is that compared to other parts of the country, the Delta is actually one of the least abundant locations for sturgeon. So, why not release and help preserve the population?”
This is where my cousin chimed in, laughing. “My friend told me he boils sturgeon four times before he eats it. Why would you want to kill something that has to be boiled four times?” Zack agreed.
Zack also works closely with the Department of Fish and Wildlife as well as UC Davis to constantly educate himself. “UC Davis biologists determined that permanently removing a sturgeon from these waters creates a 25-year ripple effect. That’s a huge impact on our fishery.”
The late Rich Tipton of Lucky Strike Charters was one of Zack’s biggest mentors and has had a big influence on his passion for conservation and why he feels so strongly about sustainable fishing practices.
“People often call sturgeon “dinos” because they are prehistoric. However, they are not from the Jurassic period – they are from the Triassic period. So far, they’ve survived everything…except for the existence of mankind.”
This conversation provided me with a brand-new perspective on both fishing and conservation. So when a fellow passenger, 8-year old Owen, landed his sturgeon later in the day, I had a deeper appreciation for Zack’s careful handling of the fish before releasing it back to its home.
“I once caught the same sturgeon twice in the same day,” Zack laughed. “Who knows, you just might see this one again some day!”
As if I needed more motivation to come back to the Gatecrasher! Maybe re-catching my beast should be on my bucket list for 2020.
Website: www.gatecrasherfishing.com