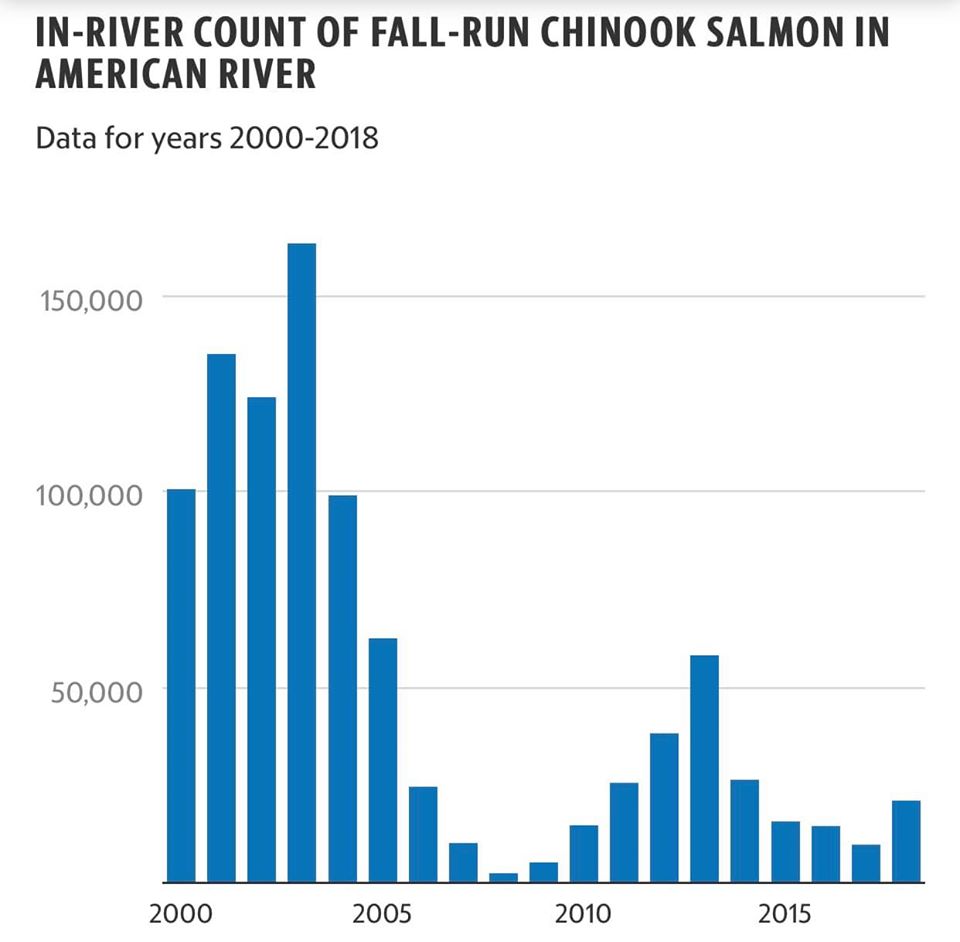 On Friday, January 10, the Bureau of Reclamation issued an order to reduce water releases on the American River below Nimbus Dam from 2,500 cfs to 2,000 cfs at a time when fall Chinook salmon eggs are incubating in the redds (nests), a critical period in the life cycle of the species.

The Reclamation spokesperson cited “storage conservation” (in Folsom Lake) as the reason for reducing flows.

Over the past 18 years, salmon runs on the American River, the crown jewel of the Sacramento are, have declined dramatically from a record run of over 150,000 fish in 2003 to relatively small numbers in the past few years, as the above chart reveals. In only one year since 2005 – 2013 – did the run exceed 50,000 fish.

The cut in flows may result in the dewatering of salmon redds (nests) and the stranding of salmon fry in pools, according to salmon advocates. The dropping of flows may also adversely impact steelhead that are now spawning in the river,

The memo from Reclamation states:

Please make the following release changes to the American River at Nimbus:

Salmon advocates responded with dismay to the change in flows, arguing that this wouldn’t be good for American River salmon and eggs now incubating in their nests on the river.

Felix Smith, Board Member of the Save the American River Association (SARA) and the federal whistleblower biologist who exposed the Kesterson Federal Wildlife Refuge scandal in 1983, asked Bureau officials, “Who is responsible for monitoring the river to observe what happens? Let it be realized that is 20 percent of the river flows,  2500 cfs down to 2,000 cfs. What is the presence / status of any swim up fry in the river? They most likely hug the shore line and other shallow areas.”

Nobody from Reclamation has yet responded to Smith’s questions.

Likewise, John McManus, President of the Golden State Salmon Association (GSSA), noted in a post on the Golden State Salmon Facebook page, “This can’t be good for American River salmon. The US Bureau of Reclamation, the operator of Folsom Dam, is planning to drop the river by 20 percent in a five hour period on Wednesday. Don’t they know there are incubating salmon eggs that will likely be dewatered and killed? Why are they killing off our salmon?”

Bob Sparre, fishing guide and board member of the NorCal Guides & Sportsmen’s Association (NCGASA), on the same page commented: “The US Bureau of Reclamation knows they will be dewatering salmon redds. It’s not the first time. They do not care about salmon or steelhead. It is clear that if we did not have hatcheries we would not have any salmon or steelhead left.”

Ironically, the Reclamation memo ordering a reduction in flows took place the same day an article appeared in the Sacramento Bee about the increase in salmon redds (nests) after a fall habitat restoration project conducted by federal, state and local agencies: Project to restore American River for native fish leads to surge in salmon nests.

According to the Sacramento Bee, “The American River is seeing an increase in native fish nests following a fall project carried out by federal, state and local agencies to re-establish natural spawning habitats. The American River Fishery Restoration Project stretched through September 2019 and poured 14,000 cubic yards of gravel into the riverbed near Fair Oaks, while creating a side channel to rejuvenate 5.5 acres of spawning and rearing habitat. A November analysis by the Sacramento Water Forum tallied 345 salmon redds in the restored area, compared to zero redds in 2018.”

The slashing of flows on the American, Feather, Sacramento and other Central Valley rivers by the federal and state water agencies when salmon and steelhead are spawning, when eggs are incubating in the nests and when fry are migrating downriver has been a persistent problem for decades.

“if my understanding is correct, the State Water Resources Control Board has the authority to stop the type of wildly fluctuating water releases on the American River that are killing our salmon,” concluded McManus. “Salmon are an incredibly valuable resource to millions of Californians. The federal government should not be allowed to operate Folsom dam like a yo-yo.”

I will update this article as more information comes in.