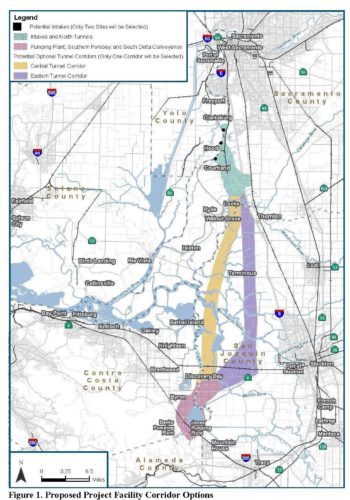 Drawing strong criticism from salmon advocates and environmentalists and praise from water agencies and agribusiness, the Gavin Newsom Administration on January 15 formally began the planning process for a controversial single tunnel under the Sacramento-San Joaquin River Delta when the California Department of Water Resources (DWR) released its Delta Conveyance Notice of Preparation.

The notice starts the preparation of an Environmental Impact Report (EIR) for the “Delta Conveyance Project” that will divert water from the Sacramento River through a tunnel to the state and federal water pumping facilities in the South Delta, to then be shipped to San Joaquin Valley irrigators and Southern California water agencies.

According to the documents, the state will consider a tunnel that would divert 6,000 cubic feet per second (cfs) of water from the Sacramento River. Tunnels with the capacity to divert 3,000 cfs and 7,500 cfs will also be considered as alternatives.

In February of 2019, Governor Gavin Newsom announced that his administration was abandoning Governor Jerry Brown’s twin tunnels project and replacing it with a single Delta Tunnel. The project will require approval from both state and federal government agencies.

In a news release, DWR said the purpose in proposing this project “is to develop diversion and conveyance facilities in the Delta necessary to restore and protect the reliability of California’s water deliveries south of the Delta in a cost-effective manner, and consistent with the recently released draft Water Resilience Portfolio.”

“Governor Newsom directed state agencies to pursue a single tunnel solution to modernize our water infrastructure, and when combined with the broader, statewide Portfolio approach, this project would help safeguard a vital source of affordable water for millions of Californians,” said DWR Director Karla Nemeth. “This water supply is critical to the health of local communities, the future of the Delta ecosystem and the success of our state’s economy.”

In his 2019 State of the State, Governor Newsom reiterated his support of a single Delta Tunnel stating “the status quo is not an option. We need to protect our water supply from earthquakes and rising sea levels, preserve delta fisheries, and meet the needs of cities and farms.”

The release of the document follows a week after the administration released the “water portfolio” document that promotes the Delta Tunnel, Sites Reservoir and voluntary agreements as among the “solutions” to California water problems: www.dailykos.com/…

The project would divert massive quantities of water from the Sacramento River rather than letting the water flow naturally into the San Francisco Bay-Delta Estuary, depriving the estuary of the water that it needs to function as an ecosystem, according to project opponents.

Sierra Club California noted that the document is the first step in the environmental review process under the California Environmental Quality Act (CEQA) that the project must clear before it can be considered for permitting by other state agencies.

“Since last February, when Governor Newsom said during his state-of-the-state address that he would support a single tunnel, we knew this expensive and outdated idea wasn’t off the table.

“However, we anticipated that there might be an effort to employ a list of efficiency, conservation, and other measures to reduce dependence on a tunnel before moving forward on such a massive and environmentally harmful project. In other words, we thought the horse would come before the cart.

“So, now we’ll have to focus a lot of time and energy on battling the tunnel again. And we now know with certainty, that Governor Newsom’s policy on water is not a whole lot different from Governor Brown’s.”

Regina Chichizola, co-director of Save California Salmon, joined Sierra Club California in criticizing the release of the document, saying Newsom is “racing” to build the project.

“Newsom’s water portfolio was announced only a week ago and already he is racing to build the one tunnel project,” said Chichizola.  “His stated commitment to building the proposed Sites Reservoir and water diversions, and a new massive tunnel are a slap in the face to the North state and salmon dependent people.”

“These two documents show that Newsom is committed to the same failed water policies that have brought our salmon to the brink of extinction and poisoned our drinking water supplies. It is time to fight back. Mark your calendars. We will be headed south,” she urged salmon advocates.

The dates, times and locations of the scoping meetings for the project are listed at the end of this article.

Likewise, Barbara Barrigan-Parrilla, executive director of Restore the Delta, said, “We are disappointed that the notice of preparation for the Delta tunnel project was released today,” citing the following problems with the tunnel proposal:

“We have consistently maintained that regional sustainability projects found in Governor Newsom’s Water Resilience Portfolio should be prioritized to reduce dependence on Delta water exports before moving forward with the tunnel.  Instead, we have crucial Delta needs once again taking a backseat to a project that Californians do not want – especially on the heels of the Trump water plan,” Barrigan-Parrilla concluded.

In contrast, Jeffrey Kightlinger, the General Manager of the Metropolitan Water District of Southern California, said his organization welcomed  “progress on this long-overdue upgrade to the statewide water delivery system, which will better prepare California for climate change and result in more environmentally sensitive management of the Delta.”

Here is the list of scoping meetings for the project:

Public comments on the NOP are due on March 20, 2020 by 5 p.m. and may be submitted via email at DeltaConveyanceScoping@water.ca.govor mail at Delta Conveyance Scoping Comments, Attn: Renee Rodriguez, Department of Water Resources, P.O. Box 942836, Sacramento, CA 94236. Seven public scoping meetings are scheduled to receive written and verbal comments. A listing of the public scoping meetings may be found here.

It is important to note that Governor Newsom received a total of $755,198 in donations from agribusiness in 2018, based on the latest data from www.followthemoney.org. That figure includes $579,998 in the agriculture donations category, combined with another $116,800 from Beverly Hills agribusiness tycoons Stewart and Lynda Resnick, owners of the Wonderful Company and the largest orchard fruit growers in the world, and $58,400 from E.J. Gallo.

By backing the Delta Tunnel, vetoing SB 1, supporting the voluntary water agreements, hiring grower William Lyons as a special “agriculture liaison” to the Governor’s Office, overseeing the issuing of a new draft EIR that increases water exports for the state and federal projects rather than reducing them and releasing a controversial water portfolio that includes fast tracking the Sites Reservoir, Newsom is apparently bending to the will of his agribusiness donors.

The release of the portfolio takes place at a critical time for salmon, Delta smelt and other San Francisco Bay-Delta fish species. For the second year in a row, the California Department of Fish and wildlife  in its annual fall midwater trawl survey in 2019 found zero Delta smelt during the months of September, October, November and December.

Found only in the San Francisco Bay-Delta Estuary, the smelt is an indicator species that shows the health of the ecosystem. Decades of water exports and environmental degradation under the state and federal governments have brought the smelt to the edge of extinction.