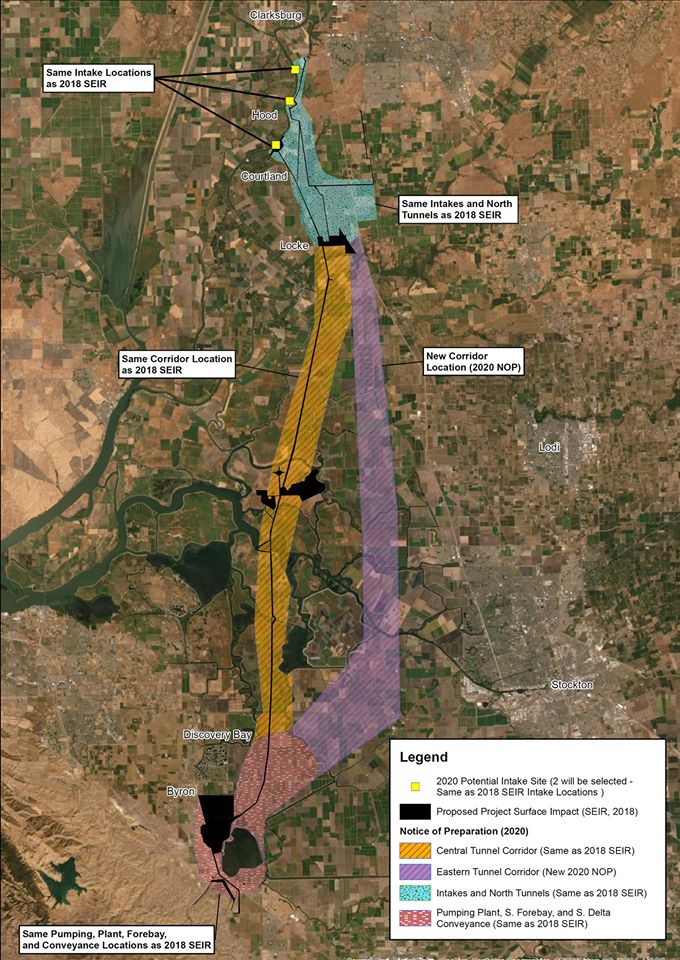 Salmon advocates criticized the portfolio for supporting agribusiness-promoted voluntary agreements for the Sacramento and San Joaquin river systems, promoting a single-tunnel conveyance project and fast tracking the Sites Reservoir, arguing that these actions could equal “death for salmon.”

The deadline to submit written feedback on the draft portfolio is February 7. A final water resilience portfolio will be released soon after that.

Information on how to submit written feedback on the draft can be found at WaterResilience.ca.gov.

In a press release, the California Natural Resources Agency, California Environmental Protection Agency and Department of Food and Agriculture said they developed the draft to fulfill Governor Gavin Newsom’s April 29 executive order calling for a portfolio of actions “to ensure the state’s long-term water resilience and ecosystem health.”

“Shaped by months of public input, the draft portfolio outlines more than 100 integrated actionable recommendations in four broad areas to help regions build water resilience as resources become available, while at the same time providing state leadership to improve infrastructure and protect natural ecosystem,” according to the agencies. “Those areas include:

“This draft portfolio has been shaped to provide tools to local and regional entities to continue building resilience and to encourage collaboration within and across regions,” Natural Resources Secretary Wade Crowfoot said. “At the same time, state government needs to invest in projects of statewide scale and importance and tackle challenges beyond the scope of any region. Taken together, the proposed actions aim to improve our capacity to prepare for disruptions, withstand and recover from shocks, and adapt from these experiences.”

The Newsom Administration highlighted the voluntary agreements and the single Delta Tunnels as “solutions” to California’s water problems in the news release.

“Since taking office, Governor Newsom has partnered with the Legislature to tackle California’s drinking water crisis, supported development of voluntary agreements to improve environmental conditions in the Sacramento and San Joaquin river systems, and advanced a single-tunnel conveyance project under the Delta to protect a key statewide water source from levee collapse caused by flood or earthquake risk and saltwater intrusion as sea level rises,” the release stated.

In response to the water portfolio’s release, Regina Chichizola, co-director of Save California Salmon, stated, “The governor is prioritizing fast tracking the Sites Reservoir, which is a threat to the Trinity and Sacramento Rivers, voluntary agreements related to flows, and a new one tunnel proposal in his water strategy.”

“While there are also some great conservation proposals in this plan, a massive new reservoir that targets water from the state’s best remaining salmon rivers, undermining state regulation for flows, and the one tunnel proposal taken together could equal the death of the North State’s salmon. Anyone that cares about Northern California’s salmon and water quality should be concerned with the governor’s water portfolio,” Chichizola concluded.

In a similar vein, the Sierra Club California Water Committee on Twitter described Newsom’s Water Resilience Portfolio as “a supermarket of solutions good and bad including ocean desal, water transfers, more surface water storage (Sites Reservoir). It prioritizes voluntary agreements rather than hard flow targets and goes all in for the single tunnel.”

Jim Brobeck of the Aqualliance said the water portfolio “contains some decent urban conservation intentions but is dominated by the wet dreams of the water market by expanding unsustainable, demand-driven infrastructure.”

He said the portfolio confirms the intention to “privatize aquifers through groundwater banking, streamlined water transfer/sales, & artificial recharge of intentionally overdrawn basins,” citing the following statements from the portfolio:

“Is Newsom with his new Water Resilience Portfolio telling water agencies they can do what they want because it’s all good? Except, of course, they must pay for his single tunnel,” Brobeck concluded.

“The draft portfolio released today recognizes the importance of building a water supply that is more sustainable and more resilient to the increasing impacts of climate change,” said Jennifer Pierre, General Manager of the State Water Contractors. “We stand behind the state’s commitment to address the important issues facing the Bay-Delta and our state, including the need to complete a voluntary agreement and modernize conveyance, as a part of a broad package of local and regional water actions to benefit all Californians.”

The Coalition for a Sustainable Delta, an Astroturf organization established by executives of Stewart and Lynda Resnick’s Paramount Farms, now called the Wonderful Company, also praised the portfolio, but at the same time said the state “needs to provide more concrete solutions to a problem that will have far reaching impacts on millions who live and work in these regions.”

“While the portfolio recognizes land fallowing resulting from implementation of the Sustainable Groundwater Management Act and increasingly limited surface water supplies, it stops short of providing real solutions to address the impacts to residents, farms and small businesses that depend on reliable water supplies,” said Bill Phillimore, Coalition for a Sustainable Delta President.

Governor Newsom received a total of $755,198 in donations from agribusiness in 2018, based on the latest data from www.followthemoney.org. That figure includes $116,800 from Beverly Hills agribusiness tycoons Stewart and Lynda Resnick, the largest orchard fruit growers in the world and the sponsors of the Coalition for a Sustainable Delta.

By vetoing SB 1, supporting the voluntary water agreements, backing the Delta Tunnel, hiring grower William Lyons as a special “agriculture liaison” to the Governor’s Office, overseeing the issuing of a new draft EIR that increases water exports for the state and federal projects rather than reducing them and releasing a controversial water portfolio that includes fast tracking the Sites Reservoir, Newsom is apparently bending to the will of his agribusiness donors.

The deadline to submit written feedback on the draft portfolio is February 7. A final water resilience portfolio will be released soon after that.

Information on how to submit written feedback on the draft can be found at WaterResilience.ca.gov.