Rain had fallen overnight and it was chilly. Both the air temperature and the water temperature hovered in the low 40’s. Fingers of fog snaked through the pines on the hillsides above the lake and the surface was dotted with leaves, pine needles and twigs due to a rapidly rising water level. Yet the water itself was nearly crystal clear.
The kayak cut though the water silently and the Lowrance unit to my right indicated a speed of 1.8 mph. On the portside a trolling fly was working off my hybrid leadcore rig at 5 feet deep. A copper Trigger Spoon Jr. was swim just under the surface on the starboard side on a spinning rod rigged with 8-pound test.
Clearing the cove, I turned up the lake and was just thinking that I was surprise I hadn’t had a bite when the trolling fly got hit, hit again and then hooked a fish. Snatching the rod from the holder I made a crank or two on the reel and felt the fish come off, but I didn’t have time to feel any disappointment. 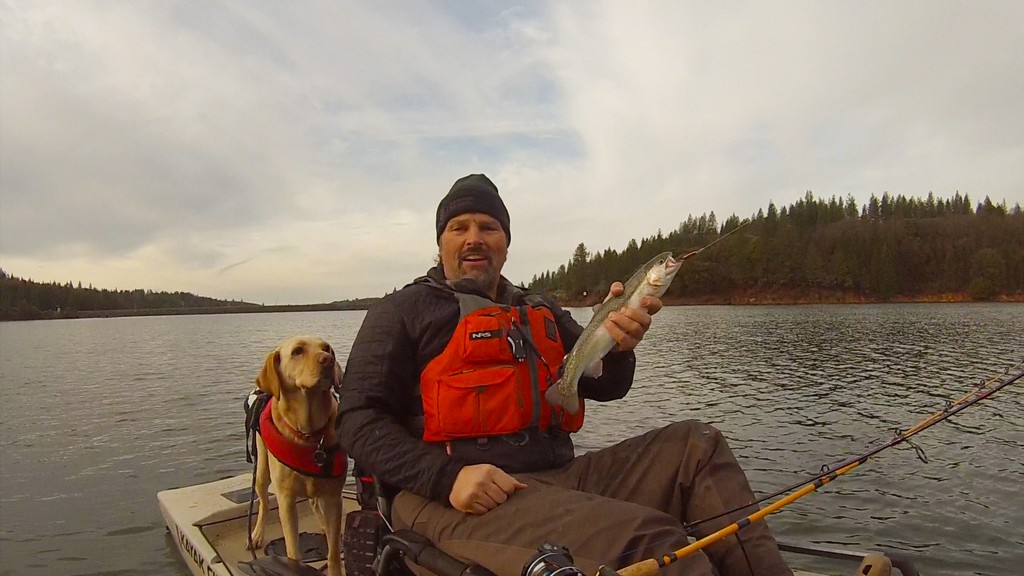 Glancing down I was shocked to see the spinning rod buried and bucking against the fight of a determined fish. Double hookup!
Putting the leadcore rod back into its holder with my left hand, I grabbed the spinning rod with my right and peddled forward to keep the kayak from spinning around and tangling my world.
The trout put up a strong fight with lots of head shaking, but it was no match for the flex of the spinning rod and I soon had the rainbow beside the kayak. The trout was chrome bright and contrasted brilliantly against the background of the water.
I’d forgotten my net, but the trout looked solidly hooked so I slid it up towards the nose of the kayak and lifted it aboard. The rainbow was a chunky planter that measured about 16 inches long. What a way to kick off the trout season!
If you are a regular reader of my trout fishing stories here in the Fish Sniffer or a viewer of my trout stuff on YouTube, you might be thinking I was fishing at some off the grid destination in far northern California.
Not this time. The action I just described took place at Rollins Lake, just off Highway 80 near the town of Colfax. 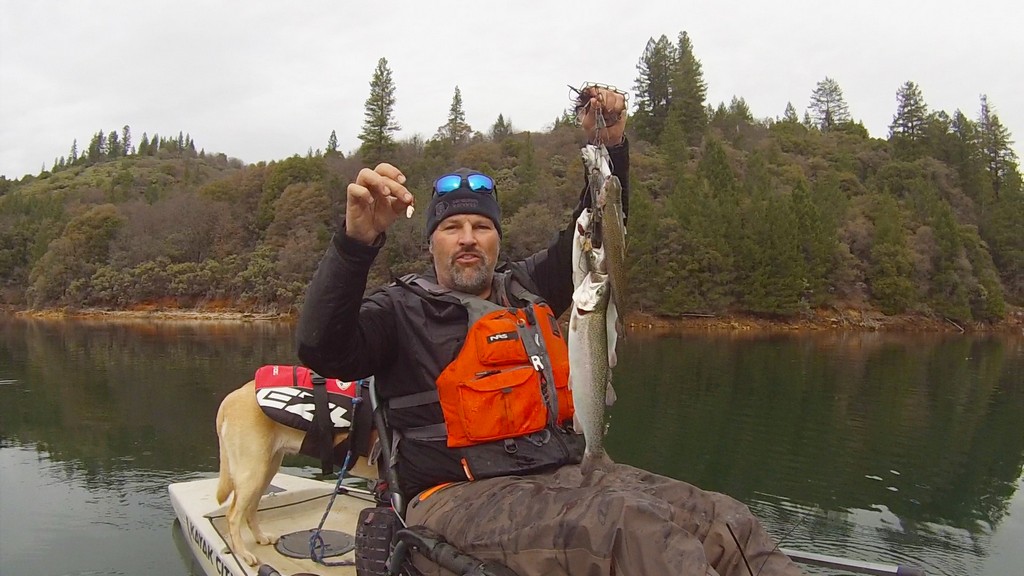 If you’re not familiar with Rollins Reservoir or Rollins Lake as the locals here know it, Rollins was formed in 1965 when the Nevada Irrigation District completed construction of a 228-foot-high, 1,840-foot-long earthen dam on the Bear River. The intent was to create a multiple use reservoir that would create electricity while providing flood control, drinking water, irrigation water and recreation for residents of the surround foothill communities.
The lake features two arms, the Bear River Arm and the Greenhorn Creek Arm and a main body. When at maximum capacity Rollins holds 66,000 acre feet of water.
With trout number one on the stringer I continued to troll the upper reaches of the main body and the lower reaches of the Bear River Arm and I kept on hooking fish.
As the morning went on, the water temperature began to rise and the bite really kicked into high gear. The rainbows I was catching had been planted about 5 weeks before and they had really taken to their surroundings. The primary forage in Rollins are pond smelt and the rainbows were feeding heavily on them as evidenced by the smelt they were spitting up in the kayak.
By early afternoon I’d landed a total of 17 trout, lost a few others and had a limit on my stringer. It was time to head back to the ramp and then home to Foresthill, but I knew I’d be back on Rollins Lake’s emerald green waters soon enjoying the solitude and Sierra scenery.