It’s been an interesting and sometimes frustrating late fall and winter fishing season here in Northern California. The fall was prolonged and warm and the winter has been largely mild and warm.
When I look up at the Sierra peaks every morning, I’m surprised by the amount of snow I see because we just haven’t had that sustained pushe of storms that we often have during the late winter.
My other gauge of winter conditions is my woodpile. I heat my house exclusively with wood and I’d say I’ve used about 30% less wood than I do in an average year.
Sometimes in the winter I’ll keep a fire going for a solid month or more. The longest stretch I’ve had a fire going this winter is something around 10 days or so. Based on this, I’d say that the winter has been significantly warmer than usual in my little piece of the Sierras.
Looking at the precipitation charts for Norcal, it looks like we are sitting at anywhere from 55% to 71% of normal and we are starting to slide out of what is traditionally the wet season, so I don’t anticipate any big rallies in terms of rain and snow fall.

In the big picture this isn’t horrible news. We are coming off a couple solid winters and most of our lakes and reservoirs are full or will fill in the near future.
If this dry trend extends into next winter we could have some problems, but for now it doesn’t look like we’ll have any water woes this year.
So how has this mild weather impacted the fishing? All in all, it seems to have tamped down the action and this is especially true for trout anglers.
We haven’t seen that intense late winter bite that we often see at places like Shasta, New Melones and Folsom. With a few exceptions such as the Oroville king bite and Tahoe mack action, I’d describe trout and salmon fishing as mostly inconsistent so far this year.
For example, Folsom is booting out a few very nice rainbows and kings, but guys hooking them are putting in a lot of time. If you just randomly take a trolling trip out to Folsom, you stand a good chance of getting skunked. The same is true of a number of other lakes such as Don Pedro, New Melones, Collins and Shasta.
This being the case, it’s been tough to settle on destinations to explore. Doubly tough when you consider not only do I have to create content for the Fish Sniffer, but I also have to come up with first hand video content for my Fish-Hunt-Shoot YouTube Channel. So where have I gone to hook up?
Well after scoring well on planted rainbow trout at Rollins Lake a couple weeks ago, I figured that was a good place to begin so I took a trip up there just prior to the Super Bowl.
The trout were still there and they seemed to be settling in nicely. I found then in a couple different areas hammering schools of pond smelt from 10 to 15 feet deep.
Peddling the Hobie along at 2.7 to 3 miles an hour for 7 hours and 10 minutes, I hammered more than 20 rainbows while pulling smelt imitating spoons. The highlight of the day came up in the Bear River Gooseneck when I hooked, landed and released a hard fighting 16-inch holdover rainbow, a nice addition to the planters.
My next stop was Sugar Pine Reservoir about five days later. This time Lucy joined me on the Hobie and Dan Bacher turned out to try his hand at some bank action.
The lake had been planted a few weeks prior to our visit and the rainbows were there, but they were not easy to catch. They were eating some sort of small midges and weren’t too keen on hitting lures or bait.
I ended up with 6 rainbows to about 14 inches, all of which I released. To get them I’m went through a lot of different lures. The only thing I could get hit on was a silver 2.5 inch Yakima Bait Mag Lip zipping along at 2.7 mph.
The bite was far from wide open, but without the Mag Lip’s skip beat swimming action I probably would have gotten skunked!
My most recent adventure was a power boat excursion to Bullards Bar Reservoir in the Duckworth with Lucy and Wes Ward.
We dumped the boat at the dam, found a few scattered fish there and hooked a few, but we were soon off looking for greener grass. We found it right off the Dark Day ramp.
We encountered big pods of kokanee scattered from 25 to 90 feet deep and they were biters. That was the good news. They would jump all over a pink hoochie or a pink Mack’s Lure Smile Blade Wedding Ring pulled behind a Mack’s Lure Sling Blade dodger and getting limits wasn’t an issue. 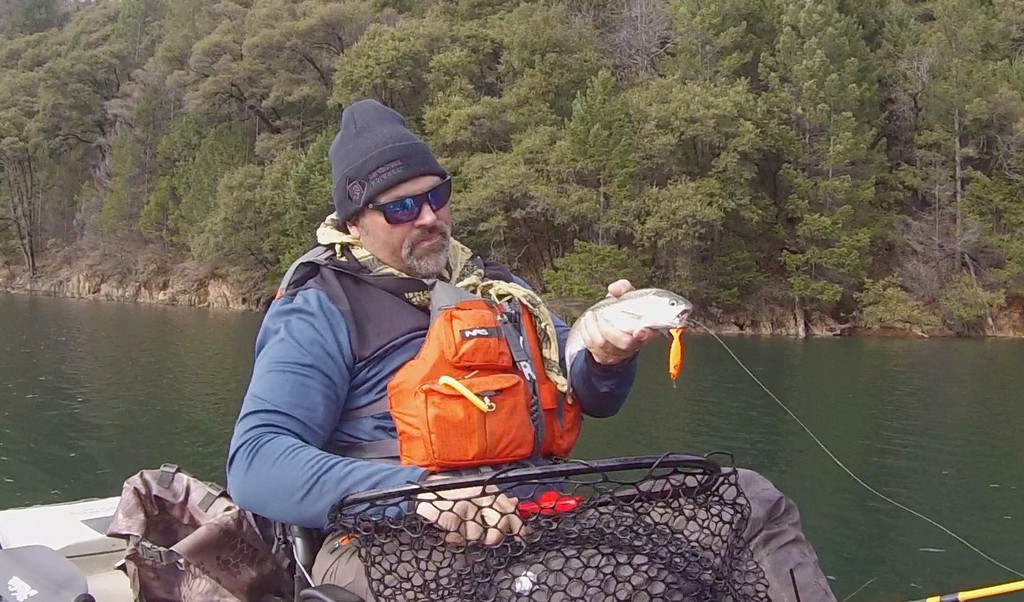 The problem was the size of the sockeyes. They were tiny. The largest salmon we landed might have stretched to 10 inches…maybe?
I have a rule about kokanee fishing that goes like this. If the kokanee aren’t 13 inches long they typically can’t rip the line out of the downrigger clip and they aren’t much fun to catch. They are just too dang small to put up a fight. 13 to 16 inch ‘kokes are lots of fun to catch and fish over 16 typically put up an epic drag spinning battle.
Will I go back to Bullards? Maybe, but I sort of doubt it unless the salmon undergo a major growth spirt.
Bullards is one of those lakes that looks fantastic, but often leaves me disappointed. It looks like it should be a killer rainbow fishery, but it’s not. There are a few rainbows there in the arms, but I’ve never gotten big numbers. The kokanee, while beautiful and in great condition, are typically small. The spotted bass fishing is the best thing going at the lake and I’ve had some very enjoyable outings targeting them, but alas I’m not a “bass guy” when all is said and done…
Where to next? I don’t know, but I will say that if these warm dry conditions persist, look for spring fishing to get started early. I think we’ve got some epic days ahead in the near future on the California Delta for spring run stripers, in S.F. Bay for spring halibut and at a number of trout lakes including Shasta, Almanor, Davis, French Meadows and many many more!