San Francisco Bay and the Golden Gate region’s coastal waters are the halibut capital of northern California. That has always been the case, but over the past couple years halibut action has been exceptionally good and that trend is expected to carry over into the 2020 season.
For decades, the one and only way for sport anglers to hook halibut was drifting with live bait. To be sure, live bait drifting remains the most popular means of hooking Mr. Halibut, but it has become obvious that there is more than one way to skin the proverbial cat. 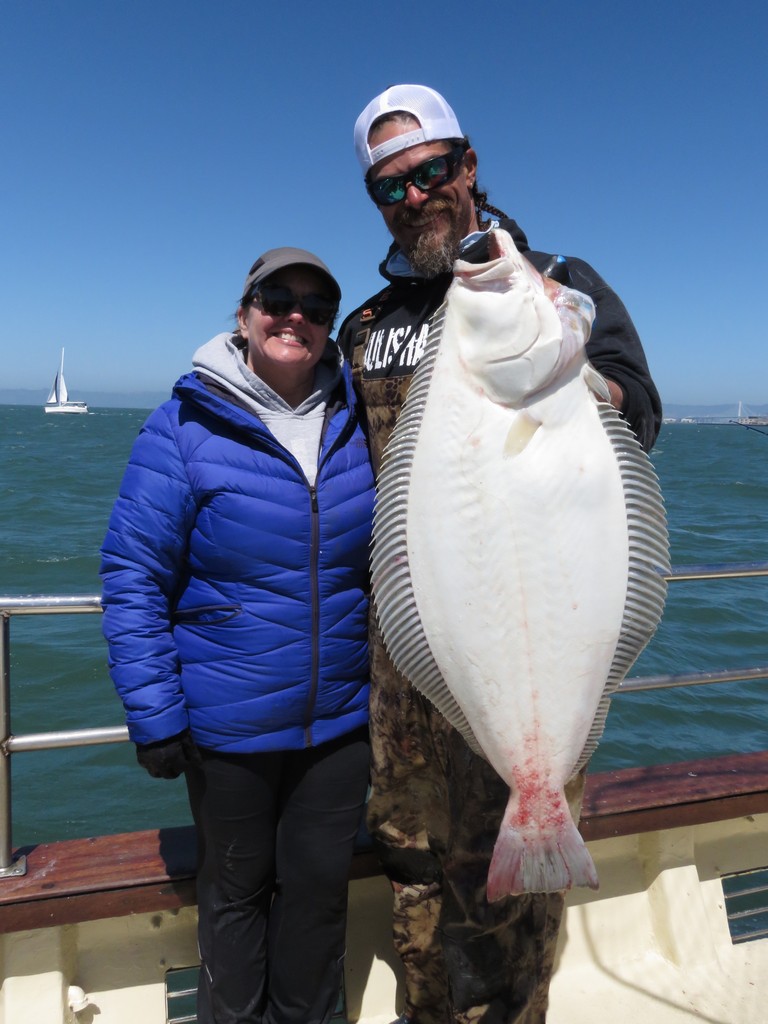 Since drifting has kept us in halibut fillets for so long and since there are some folks reading this that will take their first halibut trip in 2020 let’s begin this discussion with a review of live bait drifting.
For halibut drifting you’ll need a medium or medium light rod teamed with a reel spooled with 15 to 20-pound mono or 30 to 65-pound braid. Baitcasting outfits are preferred, but spinning gear will work.
The standard terminal tackle used for live bait drifting consists of a 3-way swivel with a 36 inch 25-pound fluorocarbon leader tipped with a 1, 1/0 or 2/0 live bait hook tied on a perfection loop connected to one of the swivel’s eyes. To the second eye a short dropper of 10-pound mono is attached with either a loop or cheap snap on the other end. Your sinker is attached to the dropper.
The dropper is made of light line, such that in the event you should snag it will break before your leader or main line. That way you’ll only lose the sinker. This is especially important if the sinker ends up getting snagged while you’re fighting a fish. This way you’ll lose the overpriced sinker, but you’ll still put your halibut into the frying pan.
With this rig attached to your rod, you arm the hook with a live anchovy by hooking the little guy upward through the nose. You don’t want to man handle the bait or hook it too deeply. You want the bait to be as lively as possible, so handle it with care. With the bait wriggling on the hook, lower the rig to the bottom, place the rod in a holder and allow it to drag along the sand. When the rod bends deeply, you’ve hooked a fish and it’s time to fight it to the net.
If live bait is unavailable or you are fishing from a private boat that doesn’t have the capacity to keep live bait, frozen anchovies and herring will catch fish when drifted. The only modification you need to make when drifting with dead bait is adding a treble hook to the rig that is pinned in the baits tail. Halibut don’t grab a dead bait as enthusiastically as they do a live one, so this stinger helps to ensure that any halibut grabbing the bait, no matter how tentatively will be hooked.
While sport anglers have long relied on drifting as their means for securing halibut fillets, commercial anglers have employed trolling to boat their fish for equally as long. Once halibut mania, gripped the sportfishing community, it didn’t take them long to learn that the commercial guys were really on to something, since no method is capable of putting as many fish in the boat as trolling, provided the fish are holding in relatively shallow water as is often the case.
Trolling requires heavier tackle than drifting. A halibut trolling stick has the same qualities as a salmon trolling rod that you’d use on a charter boat. Many anglers troll effectively while using a reel spooled with monofilament line, but I prefer to employ 65-pound braided line.
The rig used for trolling is similar to the one used for drifting. It makes use of a 3-way swivel and a dropper where the sinker attaches, but the breaking weight of the dropper should be bumped up to 15 or 17-pound test. The leader section of the rig is longer than the leader on the live bait rig and looks like this.
First a 48-inch section of 30-pound fluorocarbon is attached to the three way. To the end of that section of line an 8-inch dodger is attached. To the rear of the dodger 24 to 36 inches of leader is attached and tipped with either a frozen baitfish or an artificial lure. 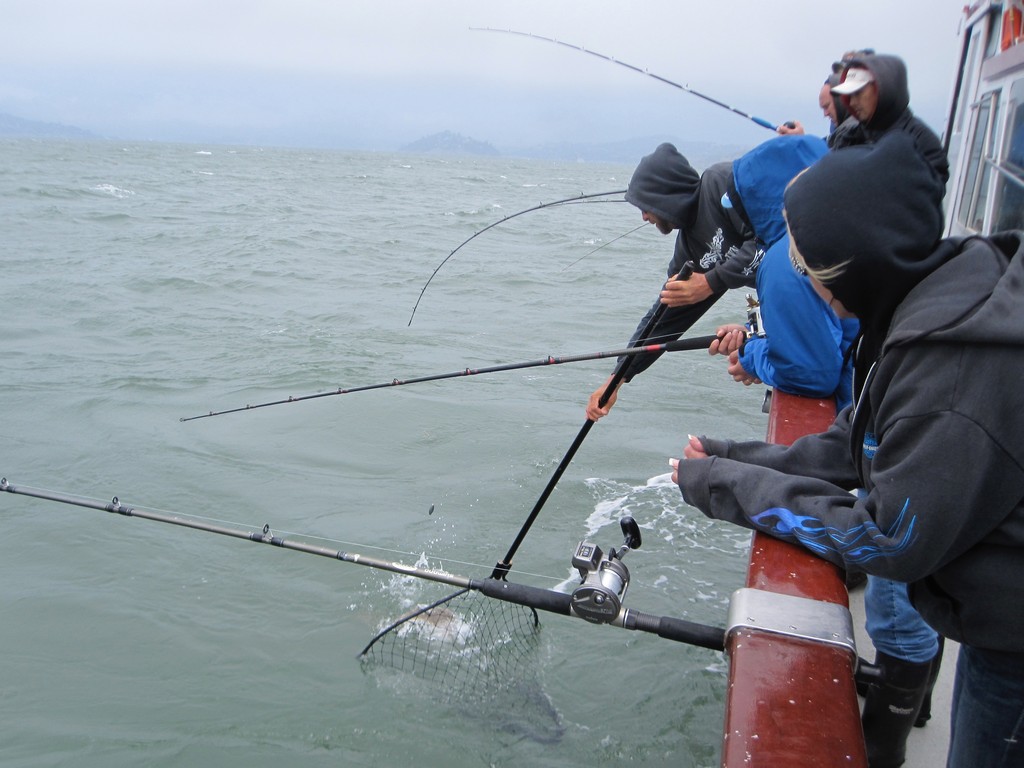 A frozen anchovy rigged with an octopus hook in the nose and a stinger treble in the tail is the best offering. With the bait in place an 8 ounce to one pound weight is snapped on the dropper, the rig is lowered to the bottom and trolled across the flats as slowly as possible. When the rod bends and pulsates, a halibut has been hooked and it’s time to reel in your prize.
Drifting and trolling are the top two methods employed by boaters, but shore guys can catch halibut too, using a couple of different approaches. Likely the most effective means of hooking halibut from shore or the piers that dot the bay is soaking live bait using a sliding sinker rig identical to that which striper anglers use for fishing in the Delta.
For live bait bank fishing, you’ll want a 7 to 10-foot saltwater spinning rod spooled with 20-pound mono or 30-pound braid. Pass the main line through a sliding sinker sleeve and knot on a snap swivel. To the swivel attach a 30 inch 30-pound fluorocarbon leader tipped with a 2/0 live bait hook affixed via a perfection loop.
Live shiner perch are the most popular bait but smelt, mudsuckers and bullheads can also be used. One or more of these baits can be found at Bay Area bait shops or you can catch your own using a trout rod and a small hook baited with bits of pile worm.
These live baits can either be hooked through the lips like a live anchovy or pinned lightly through the skin near the tail. With a 3 to 4 once sinker attached to the sliding sleeve, these baits should be tossed gently into a likely area and the waiting can begin. When you get a bite feed the fish several yards of line before setting the hook to ensure the halibut has the bait well inside its mouth.
Plugging is the other proven method that shore anglers use for hooking halibut. The same spinning rod used for fishing live baits can be used for tossing lures. The lure of choice is a pearl 4 to 5-inch swimbait, such as a Fish Trap rigged on a ½ to 1 once lead head. A short section of 80-pound test braid should be attached to the bend of the jig’s hook and tipped with a small treble. The treble is pinned in the swimbait’s back near the tail to booby trap any short strikers.
Swimbait technique is simple. Make a long cast, slowly swim the jig along the bottom and repeat. You won’t catch a halibut every outing while plugging, but the satisfaction of hooking a hefty 10 to 20-pound flatty while tossing an artificial from the bank makes up for the dead time between hook ups!