Anglers for weeks were gearing up to fish the ocean salmon season opener in the Monterey Bay region on Saturday and in the Half Moon Bay, San Francisco Bay Area and Bodega Bay regions on April 11. But the situation has changed dramatically over the past couple of weeks with the COVID-19 crisis.

On Wednesday, the federal and state fishery managers announced the closure of all ocean salmon fisheries in California scheduled to open in April due to the coronavirus pandemic.

California’s recreational ocean salmon fishery will be delayed statewide through the month of April, despite plans made earlier this year for the fishery to open in some locations as early as Saturday, according to a news release from the CDFW. The plan is to reschedule for May 1.

“The delay is the result of an in-season action taken Tuesday by the National Marine Fisheries Service (NMFS), on advice from the Pacific Fishery Management Council’s

(PFMC) salmon industry advisors and the California Department of Fish and Wildlife (CDFW). The April delay is a response to physical distancing requirements and widespread closures of launch ramp facilities, charter boat operations and restrictions to harbor and marina access due to the pandemic. Delaying the opener of the fishery will reduce impacts to stocks of concern and provide more fishing opportunity later in the summer months than would otherwise be possible,” the CDFW stated.

“Recreational salmon season dates and regulations that will take effect on or after May 1 in all areas of California will be determined at the April 5-9 PFMC meeting, which will be held via webinar due to the COVID-19 health crisis. To learn more about how to attend and participate virtually, as well as provide input on existing season proposals, please visit the PFMC’s website at www.pcouncil.org,” the CDFW stated.

The Department said anglers are always advised to check for updated information when planning a salmon fishing trip. Season dates, bag/possession limit information and gear restrictions can be found on CDFW’s ocean salmon webpage. Public notification of any in-season change to conform state regulations to federal regulations is made through the NMFS ocean salmon hotline at (800) 662-9825.

“CDFW reminds Californians that everyone has the responsibility to flatten the COVID-19 curve by maintaining physical distance from other people of 6 feet or more when recreating in the outdoors, and staying home if they are sick,” the CDFW concluded.

“There was an in-season action by conference call on Tuesday to close all April salmon fisheries,” reported James Stone, President of the Nor-Cal Guides and Sportsmen’s Association (NCGASA), a member of the Salmon Advisory Subpanel of the Pacific Coast Fishery Management Council (PFMC). “COVID-19 has created challenges from marina and boat ramp closures on the coast. Many ramps are already closed and access will be limited in April.”

“Also, the governor’s social distance policy must be followed and will be hard to follow if multiple people are on boats in tight quarters,” said Stone. “Non-essential travel would be required for all fishermen to get to the only few ramps left open against the guidelines.”

To join the Nor-Cal Guides Sportsmen’s Association, go to: NCGASA.Org.

Marc Gorelnik, Vice-Chair of the PFMC, confirmed, “Ocean salmon season will not open in April. Access to the April fishery has been virtually eliminated through actions taken by state, county and local agencies. No party or six-pack boats will be going out.

No launch ramps are open apart from a couple on San Francisco Bay that may yet close. Canceling the April fishery also eliminates the April impacts and allows opportunity to be shifted later in the year,” he added. 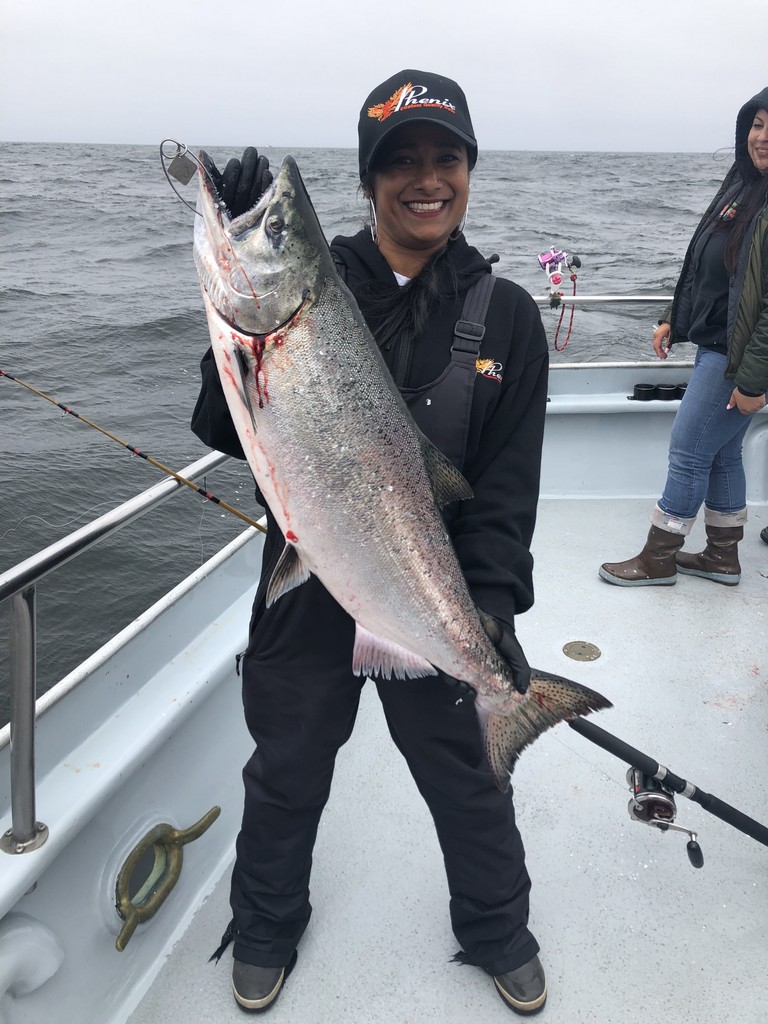 Photo: Recreational angling for salmon will be delayed during the month of April, due to the COVID-19 Pandemic. Photo courtesy of Cat Kaiser, Golden State Salmon Association (GSSA).