The silvery fish leaped out of the water and then surged on one last run in the clear water. It was Memorial Day 1969 and this was the first time that I had ever fished for or hooked a shad. I was using a light spinning rod with a Mitchell Garcia reel and 4 lb. test line of indeterminate origin.

I worked the dogged battler toward me and finally landed it in the cold waters of the American River at Ancil Hoffman Park. I admired the fish, an anadromous member of the herring family with a metallic body and dark spots on its shoulder, and put it on a stringer. I had just caught a fish that I would spend thousands of hours pursuing for the rest of my life. 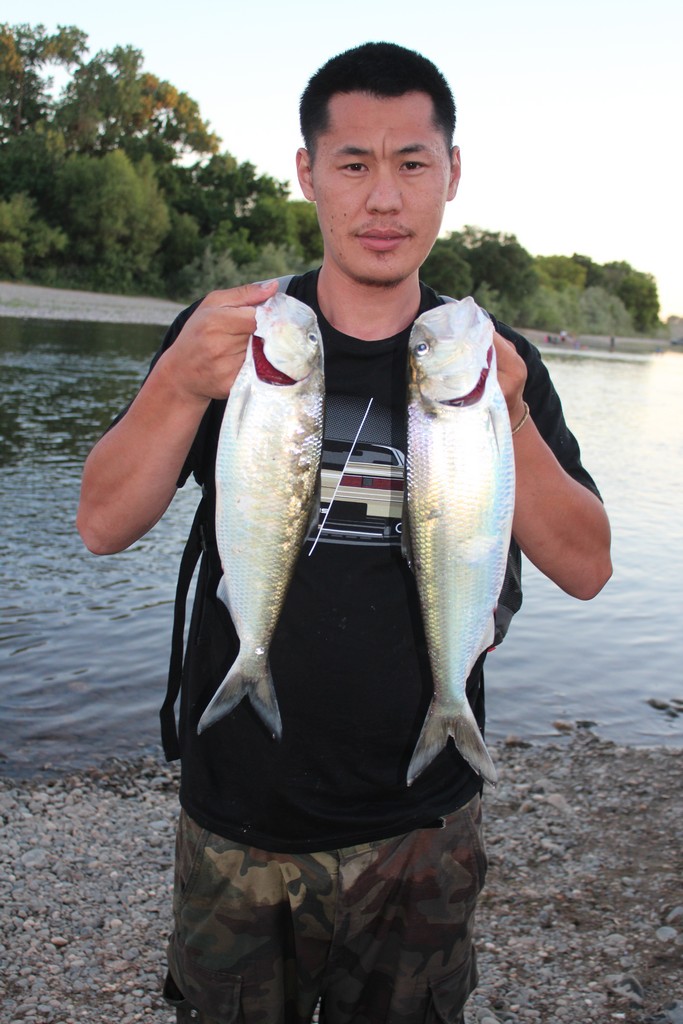 I had hooked a shad – but that first shad had also hooked me. Since that time, I have caught countless numbers of shad in the American River, as well as in the Sacramento and Feather rivers.

Fifty one years later on Memorial Day 2020, anglers were still fishing the river on a warm evening at the beginning of a heatwave. The world has changed dramatically, much for the worse, since then. The fishing wasn’t as good as it once was, due to the export of water through the state and federal water projects, other water diversions, pollution of our rivers with an array of toxins and other factors.

But anglers, young and old alike, were still avidly pursuing shad with spinning gear in the beginning of a heatwave at Harrington Access. Success was mixed, with anywhere from zero to four shad per rod, but in these crazy coronavirus times, the shad is still a fish that attracts big crowds of anglers. And in years with heavy precipitation and abundant river flows, shad fishing can still be very good when you hit it right.

The shad is one of the most popular – and yet mysterious fish – that anglers pursue on California’s Central Valley rivers in the spring. Shad are known for the great fights that they provide on light spinning and fly gear, as well as for the fine tablefare they offer when smoked, pickled or baked. 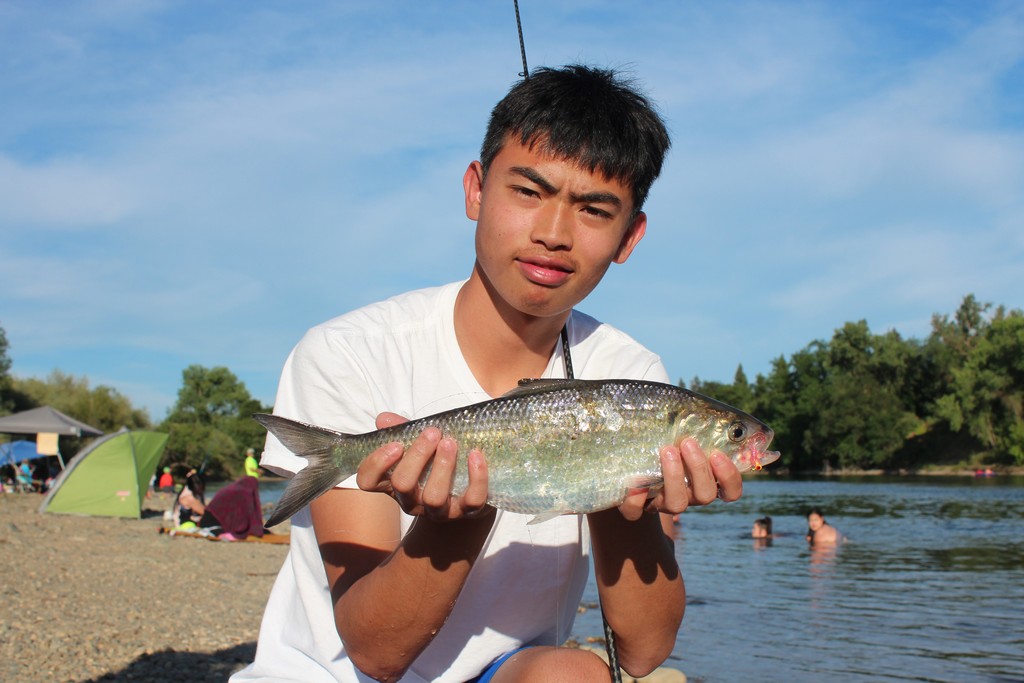 American shad, rather than going back to their specific tributary rivers like salmon and steelhead tend to do, go concentrate on where the flows in the river system are the highest. When flows are high on the American, you can expect a significant number of fish, including those spawned on the Sacramento and Feather, to make a right turn into the river at Discovery Park.

Shad, like striped bass, are a native to the Eastern Seaboard. Shad were first introduced to the West Coast from the Hudson River in New York in 1871. After shipment across the country in 8-gallon milk cans, the California Fish Commission released about ten thousand shad from the Hudson River into the Sacramento River. (http://fishbull.noaa.gov/1094/1094pearcy.pdf)

The fish naturally occurs on the Atlantic Coast from the Sand Hill River in Labrador to the St. Johns River in Florida. By 1891, the fish had expanded its range on the West Coast as far as Alaska. (https://nas.er.usgs.gov/queries/factsheet.aspx?SpeciesID=491)

Since then, the feisty herring have migrated from saltwater every year to spawn in the American and other Central Valley rivers. In addition to the Sacramento and San Joaquin River systems, shad migrate into the Russian, Klamath, Trinity and other rivers.

The annual California Department of Fish and Wildlife mid water trawl survey, where the young-of-the-year shad and other fish species are surveyed at a numbers of locations throughout the estuary, showed a 97.7 percent overall shad decline from 1967 through 2015, according to Bill Jennings, Executive Director of the California Sportfishing Protection Alliance.

The  2015 abundance index for American Shad was the lowest in history of the survey. Only 59 American shad were collected at the index stations.

The decline of shad occurs in the context of the overall collapse of Delta fish populations, due to the massive export of water by state and federal water pumping facilities on the Delta. From 1967 through 2015, populations of striped bass, Delta smelt, longfin smelt, splittail and threadfin shad also declined by 99.7, 98.3, 99.9, 98.5 and 93.7 percent, respectively.

The Central Valley Project Improvement Act (CVPIA) of 1992 directed the Secretary of Interior to double the naturally spawning populations of all anadromous species, including salmon, steelhead, sturgeon, American shad and striped bass, by 2002. Of course like many laws protecting fish in California, this law has been very poorly implemented.

While they are most common in the spring, adult shad can be seen or caught in the American at times anglers don’t target them. The peak time in the American is from early May to the July 4th weekend, but they can be found in the river both earlier and later in the year.

This point became clear in early March of 1968, when a friend and I went steelhead fishing at Ancil Hoffman Park. We saw the guy right next to us catch three shad on three consecutive casts while he retrieved a spinner for steelhead.

On another day many years later, former fishing guide Barry Watson observed a large school of shad in Nimbus Basin in January.

The most recent shad-specific study I’m aware of was conducted by then CDFW fishery biologist Frank Fisher in 1979. He remarked that they trapped shad in different life stages moving through the Delta throughout the period of the study. 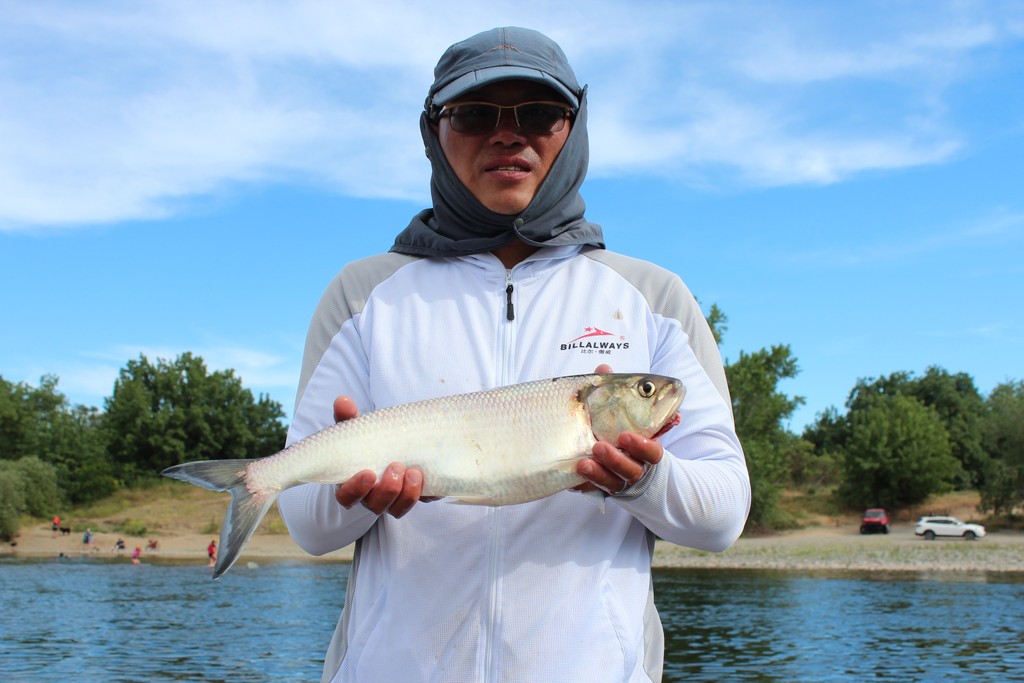 An earlier gill net and trawl survey from September 1963 through August 1963 by Don Stevens of the CDFW concluded that shad were abundant in the Delta only during their spawning migration. (http://content.cdlib.org/view?docId=kt8h4nb2t8;NAAN=13030&doc.view=frames&chunk.id=d0e2586&toc.id=0&brand=calisphere)

“The Sacramento and Mokelumne River systems supported larger runs than the San Joaquin River,” said Stevens. “There is evidence that while most shad spawned far upstream, some spawned in several areas in the Delta itself The catch and gonad maturation data suggest that a large percentage of the adults die shortly after spawning, although there is also evidence that some spent shad do migrate seaward.”

Not only are shad caught at times in the winter or early spring by surprised anglers, but anglers will also hook spawned-out shad on the American as late as October.

Little is known about their migrations at sea in California waters, though NOAA Fisheries has observed, from the capture of migrating shad at sea, that shad on the West Coast are a coastal fish that stays near the continental shelf.

“Their life at sea is poorly understood but their ability to return to their original spawning ground is known to be exceptional,” according to UC Davis. “In the fall, mature shad (3-4 years old for males and 4-5 years old for females) return to estuaries where their bodies transition to the fresh water environment.” (http://calfish.ucdavis.edu/species/?uid=4&ds=241)

There is no doubt that shad are a unique fish that provide exciting action for shore anglers and boaters using darts, jigs and flies on the American and other rivers in the spring. 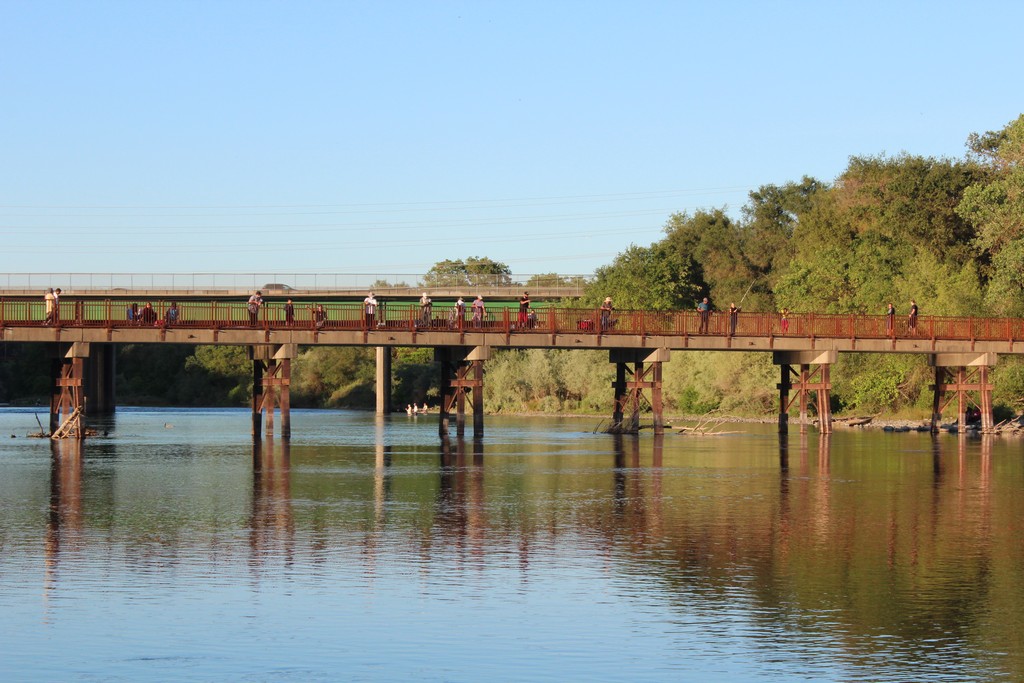 Fishing Season: The section from Discovery Park to the SMUD powerline at the Southwest Boundary of Ancil Hoffman Park, is open year round to fishing for all except for salmon. The river above the SMUD powerline to the Hazel Avenue Bridge is open to fishing to steelhead and other fishing other than salmon from January 1 through October 31.
.
The salmon fishing season is set at the Fish and Game Commission meeting every spring. The salmon season in 2017 runs runs from July 16 to December 31 except for the small section of river from the Jibboom Street Bridge to the mouth that closed on December 16. Review the California Fresh Water Sport Fishing Regulations Booklet for bag and possession limits, hook restrictions and additional restrictions: