When most of us think about trout fishing we visualize mountain streams, lakes and reservoir. This is only natural, since these are the types of waters we fish most often, but in doing so we are missing out on some of the most productive trout waters the west has to offer!
I’m talking about tailwater fisheries…The river trout fisheries that exist below dams both large and small. Many of these tailwater fisheries create a situation that is perfect growing big numbers of big trout.
First and foremost, most dams release water from deep in the lake’s water column. This means that the water in the tailwater river below the dam is cold and features a relatively stable temperature throughout the year.
The process of releasing the water and in some instances pushing the water through turbines for generating electricity oxygenates the water. And at many dams it isn’t just water that flows out of the reservoir and through those turbines, baitfish such as pond smelt and shad are pulled through them as well.
Some of these baitfish and killed and chopped up, while others emerge below the dam alive, but stunned and confused. These baitfish provide a buffet for trout and other gamefish residing in the tailwater river below the dam.
In addition to the proliferation of baitfish that most tailwater fisheries feature, aquatic insects also prosper in the cold temperature stable water.
When you combine trout, cold well oxygenated water and ample forage you have a situation where trout numbers soar and trout grow large.
For an example of just how productive tailwater fisheries can be, we need look no further than California. California is dotted with hundreds of trout lakes and thousands upon thousands of miles of streams. Yet it wasn’t any of these “traditional” waters that produced the state record 27-pound rainbow for Frank Palmer back in 2005. He caught that rainbow in a little known tailwater fishery located below Folsom Lake a short drive from the State Capital in Sacramento!
I think a major reason why more anglers don’t fish tailwaters is that many of the traditional approaches they use for hooking trout don’t work very well in tailwaters fisheries. 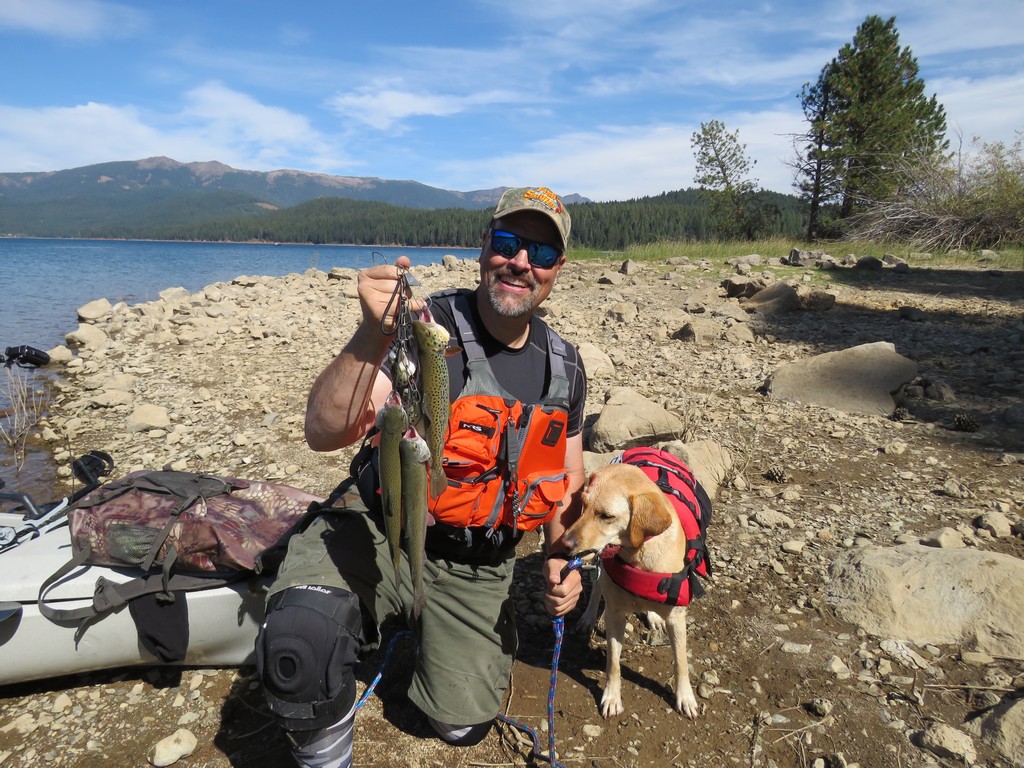 Back Trolling: The Gateway To Success!

To understand back trolling, allow me to contrast it with traditional trolling. In its basic form, traditional trolling is dragging a lure through the still waters of a lake or reservoir behind a slow-moving boat. The pressure of the still water against the slow-moving lure creates the action.
Back trolling isn’t done on still waters. Instead it is an approach that relies on current. When back trolling, the motor of the boat is used to keep the boat stationary or slowly moving backward downstream at a slower rate than the water beneath the boat. In this situation, your lure is put into the water a distance behind the boat and the pressure of the flowing water pushing past the slower moving lure creates the action.
With a skilled hand on the motor, backtrolling allows anglers to present lures and other offerings very precisely, steering them into prime areas and keeping them there for extended periods of time.
When trolling traditionally, the lure or offering passes by the fish and they either strike or they don’t. When back trolling, you have the opportunity to put your lure right in the trout’s face and keep it there for a long period of time and that results in strikes from both active and inactive trout.

Picture yourself on the bank of a trout stream. You’ve got a spinning rod rigged with a spinner. You toss it across the current, close the reel and allow it to swing across the current on a tight line. This is a standard presentation for a stream angler and it is a form of backtrolling.
Now let’s say the water is deep. You’re going to have to add some split shot to your line to get the rig down to the trout.
The same is true for the back troller working a tailwater fishery from a boat. In some situations when the water isn’t too deep you can run crankbaits or spinners behind the boat with no additional weight.
If the water is deep, you’ll have to add weight to get your offering down and split shot aren’t going to get the job done. Instead Most back trollers utilize either a three-way rig to add sinkers to their gear that range from a half ounce up to several ounces and they might change the amount of weight they are using several times during a trip to accommodate the depth and current of any given spot.
A three-way swivel is the heart of the three-way rig. To set it up, attach your mainline to one eye of a three way.
To the second eye add a short 3 to 10-inch dropper tipped with a snap for attaching the weight. To the third eye attach 36 to 48 inches of fluorocarbon leader and tip it with the offering of your choice.
When backtrolling a rig with a sinker attached you’ll want to hold your rod as you backtroll. Use a controlled free spool to get the sinker to the bottom and then constantly lift and lower the sinker, allowing the weight to “walk” downstream along the bottom. This ensures that the lure is in the strike zone, but the lifting and lower of the weight keeps it from getting snagged in the rocks.
In terms of rods and reels, a fast action rod capable of handling the weights you anticipate using is key. Traditional baitcasting reels, preferably with an integrated line counter are preferred. Some guys are still using mono for this work, but most including myself have made the transition to employing 20 or 30-pound braid for their mainline for the increased sensitivity braid offers.

Lure selection for backtrolling is pretty simple and you probably have most of what you need if you are an established trouter.
Traditional metal shaft spinners as well as spinners snelled on mono work well. Small to medium size crankbaits and minnow plugs are the most popular offerings and crankbaits that dive allow you to work water up to around 8 feet deep without having to mess with adding sinkers to your rig.
In terms of artificials, steamer flies and soft plastic grubs 2 to 3 inches long are sleepers that will produce big numbers of trout and are often overlooked by the backtrolling community.
When folks backtroll for steelhead and salmon in rivers they commonly utilize both lures and bait. Trouters on the other hand seldom employ bait and that’s a big mistake. Cured roe, live and dead minnows and night crawlers will all draw strikes when backtrolling.
One of my favorite tricks is to remove the hooks from a crankbait and attach a short 12 to 18-inch leader tipped with a bait hook to the back of the bait. I pin either a small hunk of cured roe or a threaded night crawler on the hook. Rigged this way I utilize the diving ability of the crankbait to get my offering down and the action of the lure catches the attention of the trout. The next thing you know, they gobbled down that succulent natural bait and its Fish On!
Before you hit your local tailwater fishery you’ve got to give some consideration to your boat and safety. You’ll be dealing big current and cold water when backtrolling for trout. Your boat has to feature a reliable motor that has the power to deal with the current and you’ll want to wear your PFD the entire time you’re on the water.