The Chinook salmon is the dean of California saltwater gamefish. Over the decades no other game fish has monopolized the California saltwater angler’s time and imagination more than the venerable king salmon. With ocean salmon seasons underway, this is a great time to take a look at the tactics involved in bringing home a mouthwatering salmon dinner.
Trolling and mooching are the two accepted approaches to catching ocean salmon here in California. Trolling accounts for the vast majority of the kings boated in any given season and is the best approach during the early season when the fish are scattered.
The preferred method of salmon trolling from a California charter boat has changed little over the past 40 years and is unique to our region. What sets us apart, is the fact that we troll with large round sinkers that weigh from 16 to 48 ounces attached to our lines. These sinkers fall off when a salmon is hooked via a spring-loaded sinker release. It’s somewhat like a primitive form of downrigger fishing, except that the weight is attached to your line instead of a downrigger cable and is lost with each hookup. 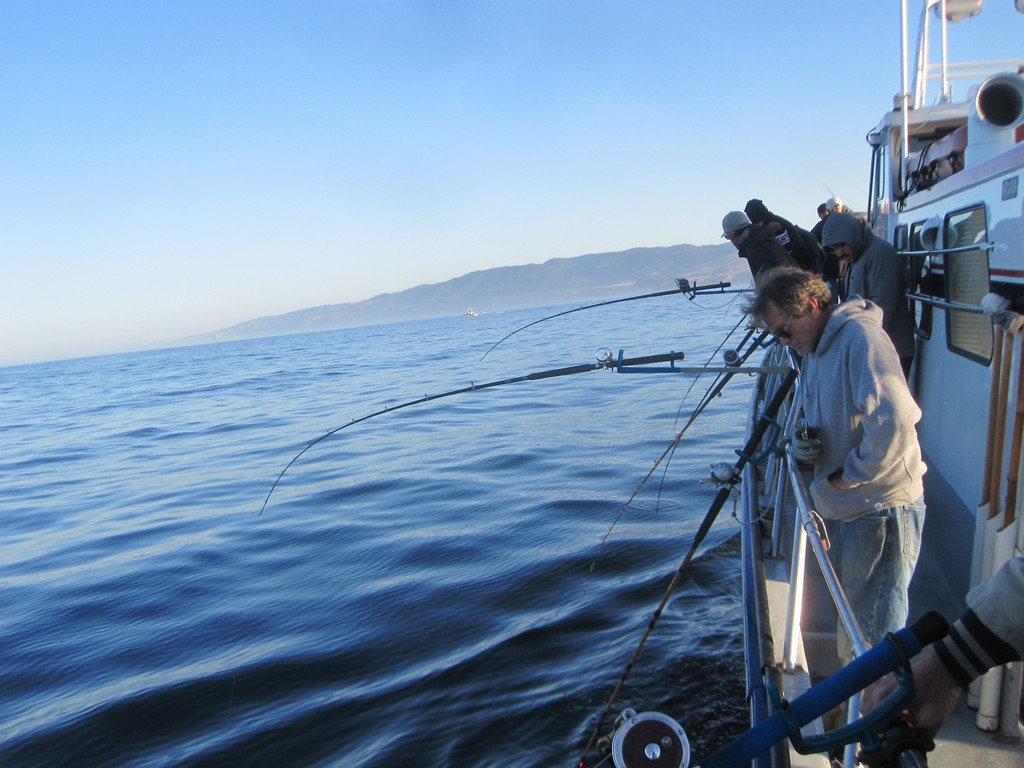 The ideal salmon trolling rod is a study in contrasts. It must be powerful enough to handle heavy lead weights, but it has to be flexible enough to cushion the salmon’s powerful bursts. It has to be stiff enough to impart proper action to dodgers and flashers, but soft enough to keep from ripping the hooks from the salmon’s soft mouth.
In days gone by, trolling rods were constructed from solid fiberglass and selecting a trolling stick was a simple proposition because there were few to choose from. Today the troller has a myriad of choices from a number of manufacturers not to mention the option of having a rod custom built to meet individual preferences.
Most charter anglers these days are using a rod that is 7 to 8 feet long and they are pairing that rod with 50 to 65-pound braid most often. There are still some guys running mono, but that number shrinks every season because braid is so much more efficient. 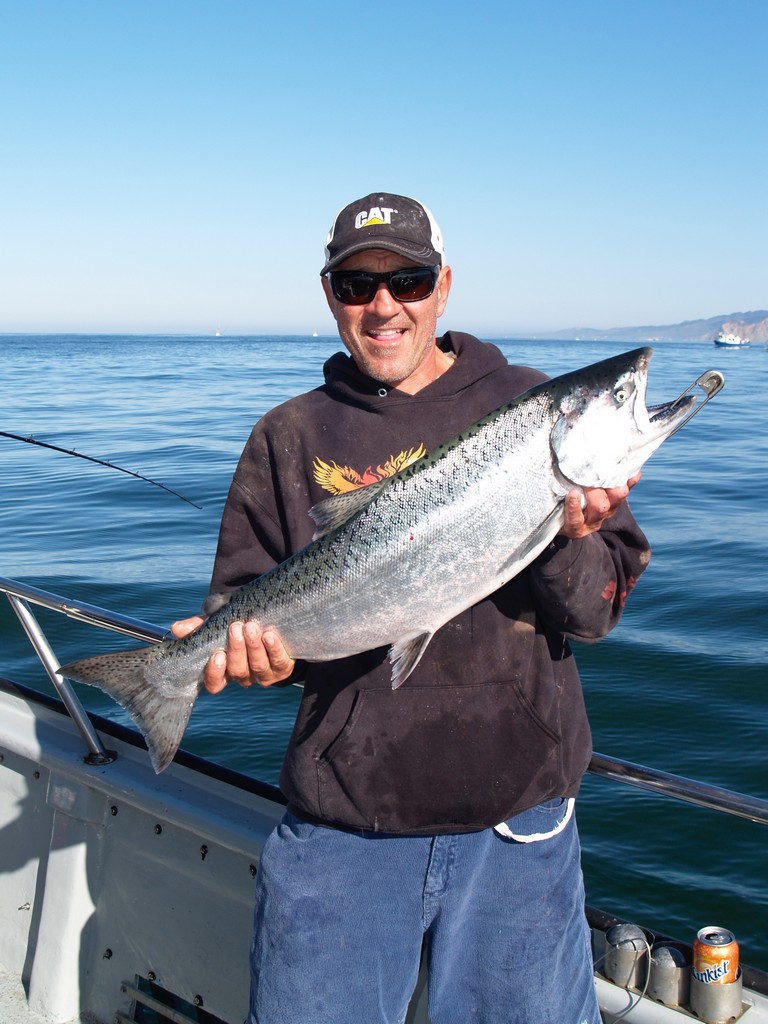 I like a lot of power in my rod. I fight ocean kings aggressively from a charter boat. I’m convinced that the quickly I can get a salmon to the back of the boat, the lower the chance that the king will toss the barbless hook.
For the past few years, my salmon rod of choice has the same heavy Ugly Stik Tiger I use for lingcod.
At the heart of the California salmon trolling rig is the sinker release. The most widely known sinker release is the copper tube variety called the “dog whistle”, since it looks like a silent dog whistle. Pull on the rear of the release and the tines of the cotter pin in the rear of the release and the tines retract and slide behind a slot in the tubing. The eye of the sinker is placed into the slot, the tension is relieved on the cotter pin and one of tines will skewer the eye of the sinker, holding it in place. When a salmon hits, it pulls on the cotter pin, the tines retract and the sinker falls out.
Now that we’ve reviewed the rods, reels, lines, and hardware of salmon trolling let’s take a look at some end tackle. Salmon off the California coast feed heavily on anchovies, herring, and other baitfish. As a result, rigged anchovies and herring are favorite baits among salmon enthusiasts.
The crowbar rig, which is based on a inserting a long needle shanked hook through the baitfish, was the traditional trolling rig for many years. The shank of the hook was bent slightly before inserting it through the bait. This bend caused the bait to slowly “roll” when trolled. Thus rigged, the baitfish was attached to a 7-foot leader. It often takes a good deal of experience and experimentation to achieve the proper bend in the hook for the best action. 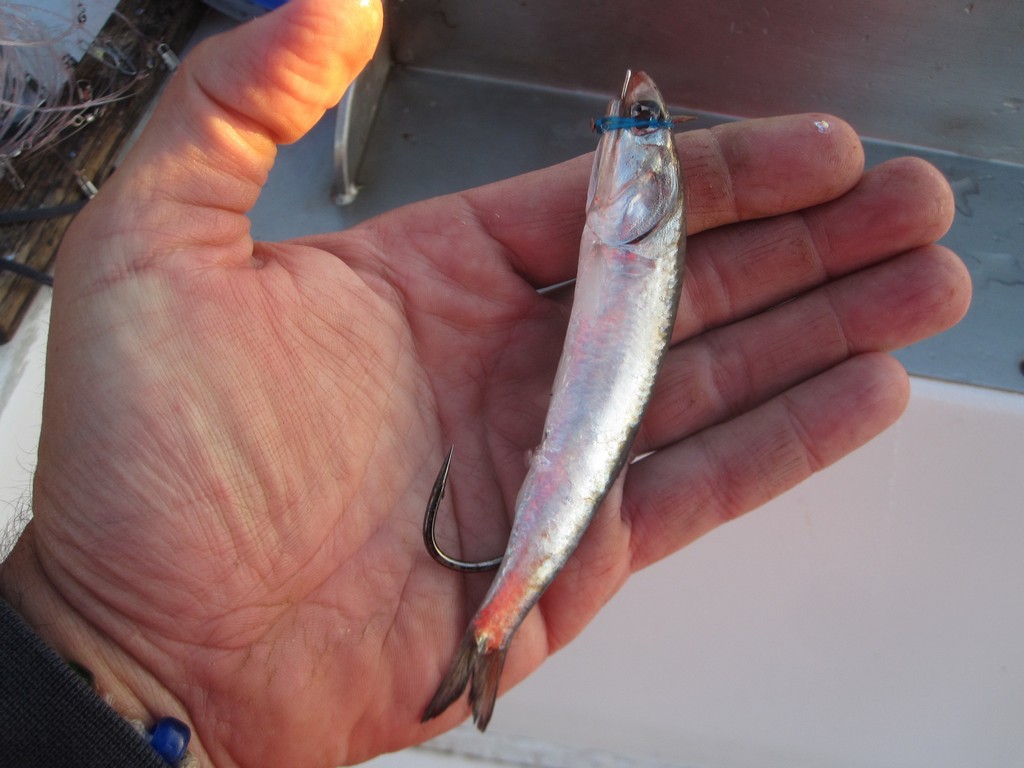 These days, innovative plastic bait hoods are available which simplify the baiting process greatly, allowing even the greenest beginner to achieve the proper “roll”. The best known of these devices is the Rotary Salmon Killer designed and sold by Dick Pool at Pro Troll. Running a close second to the RSK is the Krippled Anchovy and Herring Rig distributed by Krippled Fishing Lures in San Jose.
On days when salmon shun natural baits substituting natural bait with a Krocodile spoon, Apex Lure, or Hoochie will sometimes pay big dividends. When it comes to tempting fickle kings it pays to experiment.
Once at the fishing grounds, the skipper will instruct how deep to lower your bait. Don’t just free spool your rig down, rather lower it to the specified depth with one foot “pulls” of line. This will ensure you’re at the proper depth, while preventing tangles. After the bait or lure is at the proper depth engage the reel’s clicker and place the rod in the holder.
When a salmon strikes don’t grab the rod too quickly. Let the fish fight the rod tip for about 10 seconds before making a move, this ensures that the salmon is firmly hooked and allows the sinker time to fall away. After waiting, remove the rod, keep the tip high, and work the reel. Don’t pump the rod, thumb the spool, or tighten the drag, since these actions typically result in lost fish. As you work the reel listen to the instructions of the deckhand and your salmon will be well on its way to the grill!
This will make charter skippers, deckhands and experienced charter boat trollers all scream in pain, but here it goes anyway. You’re on a charter boat out on the ocean. There is water and salmon all around the boat, so it shouldn’t matter where you are positioned along the rail right? Wrong!
I’ve spent hundreds of hours trolling from charter boats and I can tell you from direct observation that the guys fishing off the rear of the boat, particularly the back corners and the guys fishing off the bow hook the most fish most days. Baits trolled off the bow theoretically encounter the fish first. Guys fishing off the transom have the luxury of fishing deeper than anyone else on the boat since they don’t have to worry about snagging an angler fishing behind them. Both of these advantages can be huge when it comes to competing with 25 other anglers to hook fish.
The early bird gets the worm, but while that bird is hunting worms, the early arrivals to the charter boat get to camp out on the prime locations!