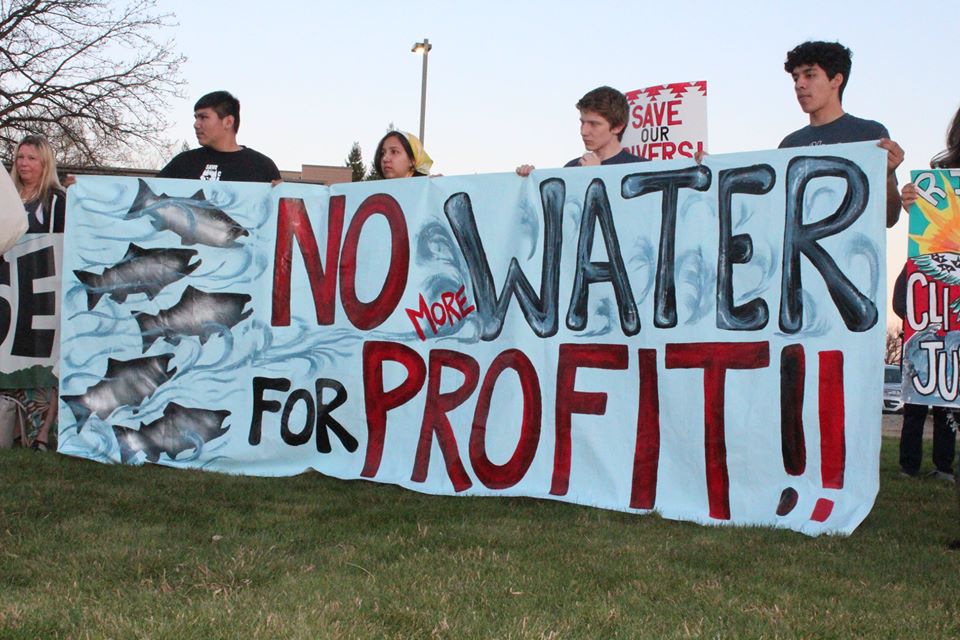 In the midst of an unprecedented pandemic, DWR submitted a revised Department of the Army permit application pursuant to Section 404 of the Clean Water Act and Section 10 of the Rivers and Harbors Act to the U.S. Army Corps of Engineers (USACE) to request authorization for the proposed Delta Conveyance Project activities in waters of the United States.

This is a necessary permit required by the federal government before the project can be constructed. You can view the permit at: water.ca.gov/…

As Regina Chichizola, co-director of Save California Salmon, explained, “A 404 permit is a “major dredge and fill permit that will led to the Federal NEPA public comment period and Environmental Impact Statement (EIS).”

“This is the same type of permit that was hotly contested by the Standing Rock Sioux Tribe during the Dakota Access Pipeline fight,” she said.

The underground tunnel project would divert water from the Sacramento River before it flows through the estuary so it can be exported through pumping facilities in the South Delta to big agribusiness interests in the San Joaquin Valley and to Southern California water agencies including the Metropolitan Water District.

In addition to the Section 404 permit, DWR said they have separately initiated USACE (and the Central Valley Flood Protection Board) review of the Delta Conveyance Project under Section 14 of the Rivers and Harbor Act, Title 33 United States Code Section 408, “as an activity that may affect the Federal-State flood control system.”

Why is DWR doing this at this time?

The agency stated, “DWR is submitting its Section 404 permit application for the Delta Conveyance Project now in order to formally engage USACE in early coordination with DWR’s California Environmental Quality Act (CEQA) process regarding environmental review under USACE’s process for compliance with the National Environmental Policy Act (NEPA), as well as Clean Water Act and Rivers and Harbors Act. The USACE permit process will not be concluded until NEPA and all other relevant environmental compliance efforts are complete.”

Chichizola noted that Save California Salmon and many others, including Tribal representatives, environmental justice advocates, and NGOs, have repeatedly asked the state to deem Delta Tunnel planning as” non-essential” during the COVID 19 pandemic.

“This is because many rural communities and Tribes cannot engage in the process currently. SCS was told that the scoping comment period is over so there is no public engagement opportunities anyway, even though plans for construction are actively moving forward,” she said.

“The decision to move forward with trying to obtain a federal permit using a set proposal, intakes and tunnel corridor so soon after the scoping period ended, and during a Pandemic, shows that state never had any intention of considering stakeholder input. This is despite the fact that thousands of people from all over California commented against the tunnel. Only major water brokers have expressed support,” Chichizola explained.

“Moving forward so quickly at this time is an insult to the rural communities that can not currently engage, to everyone’s who’s land base, water supply and food supply, are threatened by this proposal, and to very idea of public processes. It is also a dismissal of hundreds of local youth, native people, and others, that had to fight for a single scoping hearing in Northern California. We have not had the opportunity to engage in the process since the Redding hearing we had to fight to get, and we still have not had any assurances that our voices were heard,” concluded Chichizola.

In her latest blog post, Deirdre Des Jardines of California Water Research noted that the Department of Water Resources submitted a map of the proposed project with their permit application that includes the Eastern alignment for the main tunnel, and Intakes 3 and 5 (p. 37).

“The selection of the Eastern alignment is a major change from the Central Delta alignment that has been studied for over a decade. The change is likely driven by major logistical issues with construction of a tunnel and shafts through the Central Delta,” said Des Jardins.

Des Jardins said that in December of 2019, an Independent Technical Review panel of engineers from five international tunneling companies found that the Central Corridor was logistically impractical.

The ITR panel’s report stated: “The shaft locations are located a significant distance from Interstate 5, accessible by only farm roads with hindrances such as narrow weight-restricted bridges and single lanes. This makes supporting large operations, which requires a constant transfer of materials and people in and out, impractical and expensive as well as difficult to price.”

The panel further stated: “While it was recognized that extensive roadway, levee, and likely barge improvements could be constructed as part of the project for the Central Corridor… [t]he cost of improvements to provide reliable and safe access and egress at each site would exceed the cost of additional length of tunnel required for the East alignment.”

You can view the map and read Des Jardins’ article at: https://cah2oresearch.com/2020/06/22/delta-tunnel-us-army-corps-application-has-new-eastern-alignment/

The Department of Water Resources (DWR) says its Delta Conveyance Project activities include completing an Environmental Impact Report (EIR) under the California Environmental Quality Act (CEQA); completing an Environmental Impact Statement (EIS) under the National Environmental Policy Act (NEPA); “tribal consultations and engagement;” “expanding engagement with disadvantaged communities in all phases of the project;” “develop engineering and design information to help inform the environmental review process” under the Delta Conveyance Design and Construction Authority (DCA); and “restarting soil survey work in certain areas of the Delta this summer, pending completion of all necessary permitting requirements.”

However, when all is said and done, DWR is going through the motions of “consulting” with Tribes, “expanding engagement” with environmental justice communities and maintaining pretenses of going through a public process because the project has a pre-determined outcome: the construction of a salmon-killing Delta Tunnel that will devastate West Coast fisheries and drive salmon, Delta smelt and other fish closer to extinction in order to ship Northern California water to wealthy water barons in the San Joaquin Valley to expand their acreage of export crops like almonds — and to Southern California water brokers.

In other Delta Tunnel news, Scott Anderson, investigative journalist, revealed in the Sacramento News and Review on June 24 that Kathryn Mellon, executive director of the Delta Conveyance Design and Construction Authority, is getting paid a whopping $47,000 per month: sacramento.newsreview.com/….

“While the COVID-19 pandemic has blown a $54 billion hole in California’s budget—threatening education and safety programs and forcing 234,000 state employees to take unpaid furloughs—the state’s spending on a proposed massive tunnel project in the Delta hasn’t slowed.

Documents obtained by SN&R reveal that the director of the joint powers authority leading that effort, under the supervision and current financing of the state Department of Water Resources, is getting paid $47,000 every month—twice as much as Gov. Gavin Newsom and significantly more than President Trump.

DWR says that the money to pay Kathryn Mallon, executive director of the Delta Conveyance Design and Construction Authority, will eventually be reimbursed by water contractors in Central and Southern California.

Newsom received a total of $755,198 in donations from agribusiness

It is no surprise that Governor Newsom received a total of $755,198 in donations from agribusiness in 2018, based on the latest data from www.followthemoney.org. That figure includes $116,800 from Beverly Hills agribusiness tycoons Stewart and Lynda Resnick, the largest orchard fruit growers in the world and the sponsors of the Coalition for a Sustainable Delta.

By backing the Delta Tunnel, promoting the agribusiness-sponsored voluntary water agreements, overseeing the issuing of a new draft EIR that increases water exports for the state and federal projects rather than reducing them, and releasing a controversial water portfolio that includes fast tracking the Sites Reservoir, could it be that Newsom is bending to the will of his agribusiness donors?