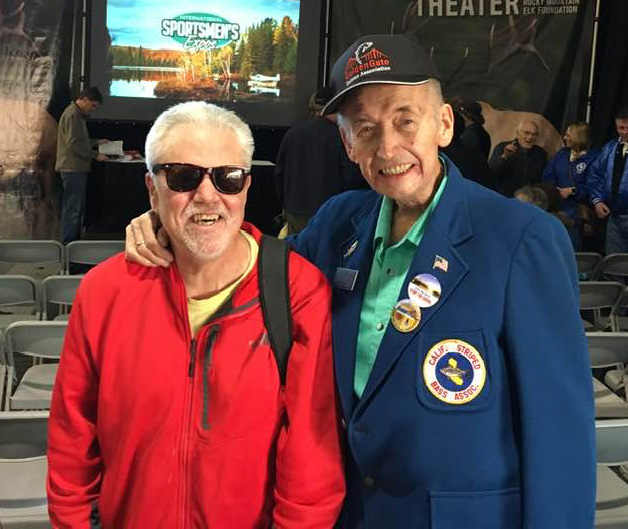 Photo: Dan Bacher and Jay Soresen after Jay’s induction into the California Outdoors Hall of Fame in January 2018. Photo by Dave Hurley.

Sorenson was one of two Stockton residents inducted into the California Outdoors Hall of Fame, the other being longtime Stockton Record outdoor columnist and author Pete Ottesen.

After successfully beating throat cancer 5 years ago, Sorensen lived with complications from the radiation therapy that left him unable to take nourishment by mouth. He was in and out of the hospital for the past several months.

The original owner of Jolly’s Bait Shop on Pacific Avenue in Stockton, many considered Sorensen to be the ‘best bait fisherman’ in the San Joaquin River Delta.

Sorensen operated a fishing guide service on the Delta for over 40 years. He  was inducted into the California Outdoor Hall of Fame in Sacramento in January 2018, in a ceremony that I attended with his close friend Dave Hurley, outdoor writer and just retired San Joaquin County school teacher, and many others.

“His last days were surrounded by friends and family along with the opportunity to view many of his numerous awards and articles from his bedside,” said Hurley. “He served as a mentor to generations of Delta anglers.”

Sorensen was probably most well-known for founding the California Striped Bass Association  in 1974.

“He was the first to sound the alarm about the deteriorating Delta ecology and fisheries,” said Roger Mammon, President of the CSBA West Delta Chapter. And Secretary of the Restore the Delta Board. “He no longer saw striped bass spawning in the San Joaquin River as they had for decades.”

The striped bass population began declining after the State Water Project went on line in conjunction with the Federal Central Valley Project.

Sorensen then rallied his fishing friends and founded the California Striped Bass Association to advocate for restoration of the fishery. The Association expanded and currently has 5 active chapters. “It is the oldest continuously operating fresh water fishing organization in the state,” said Mammon.

Sorensen guided thousands of people fishing for striped bass and other species on the San Joaquin River, including celebrities, sports figures and even politicians. The nickname “Jolly” came from his penchant for humor and joke telling.

In explaining his reason for the founding of CSBA, Sorensen told Hurley in an interview, “We became very concerned that the huge spawning runs in the San Joaquin River disappeared almost overnight in the early 70’s, since you used to be able to go out on the river at night and watch the small males bumping the females on the surface for acres. The surface of the river was white from all of the milt.”

A lifetime CSBA member and its first president, he remained an active member of the West Delta Chapter based out of Antioch.

Besides fighting for the restoration of striped bass and his beloved Delta, Sorensen was also an outdoor writer. He authored “the Let’s Go Fishing” in the Rio Vista Herald for over 40 years, as well as writing for other publications, including the Fish Sniffer magazine.

In 2015, the Bay/Delta Yachtsman awarded Sorensen the Hal Schell Award.

Sorensen had many memorable sayings. One of the most notable was, “The Delta is my Sistine Chapel. There are no two sunsets alike on the Delta.”

Another saying showed his deep understanding of California fish and water politics: “The San Joaquin River flows by gravity for its first 100 miles, but it flows by politics for the remainder of its journey to the ocean.”

For the past 14 years, Sorensen avidly supported Restore the Delta, attended their fund raising events and made generous contributions. He was also a supporting member of the California Sportfishing Protection Alliance (CSPA) and other fishery organizations for many years.

Sorensen was a vocal opponent of the peripheral canal and its later incarnations, including the California WaterFix and Delta Tunnel, from the very beginning.

A Celebration of Life is tentatively planned for July 25th at a location to be determined in Stockton.