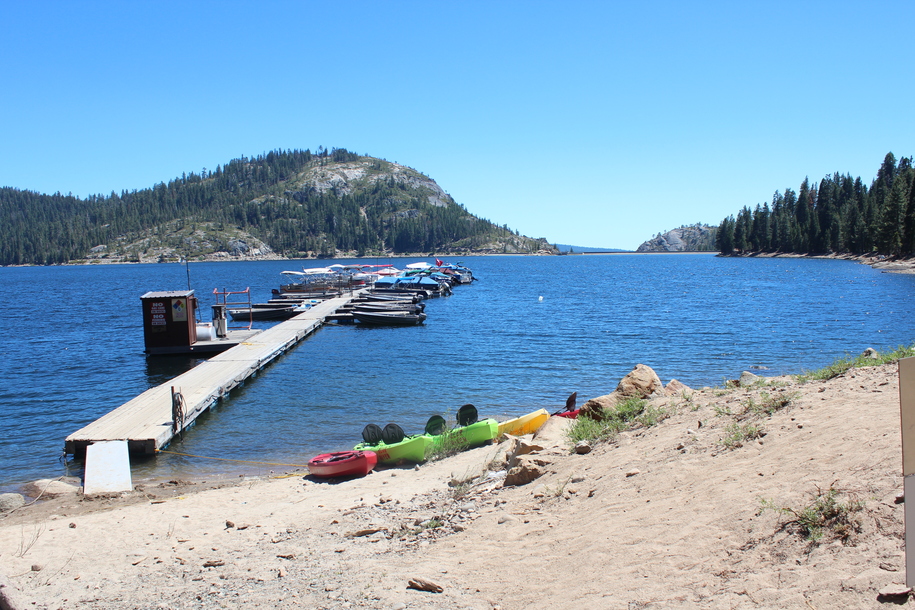 Beautiful Lower Bear River Reservoir, situated in Eldorado National Forest in the Central Sierra Nevada at an elevation of 5850 feet, is the first reservoir to open every spring along the Highway 88 Corridor coming west from Stockton because it located at a lower elevation than Silver and Caples Lakes.

While the majority of fish that anglers catch are rainbows, mackinaws and brown trout also swim in the lake’s clear waters. Mackinaw trout grow big and fat at the reservoir.

Every spring the lake produces huge mackinaw for savvy trollers – and this year was no exception. Dave Eirstedt of Sacramento landed a 16 lb. mackinaw while trolling a Rapala. Jeremy Titsworth also bagged an 18 lb. mackinaw while downrigging at 65 feet with a large Rebel, according to Rich Spears, manager of the Bear River Lake Resort.

Lower Bear River Reservoir offers an array of fishing options, ranging from trolling for big mackinaw and brown trout with plugs, spoons and nightcrawlers to shore fishing for planted and holdover rainbows.

The reservoir features 727 surface acres and a shoreline of about 9 miles when full. It is located along the Bear River, a tributary of the North Fork of the Mokelumne River, south of Highway 88.

The big event at the lake every year is the  Bear River Lake Resort Trout Derby, held on the second weekend of June every year. This year it took place on June 13 and 14. The resort stocked 1,000 pounds of trophy trout in the 2 to 7 lb. range in the lake prior to the popular event.

After the winners received their cash prizes, every angler ended up going home with a raffle prize. 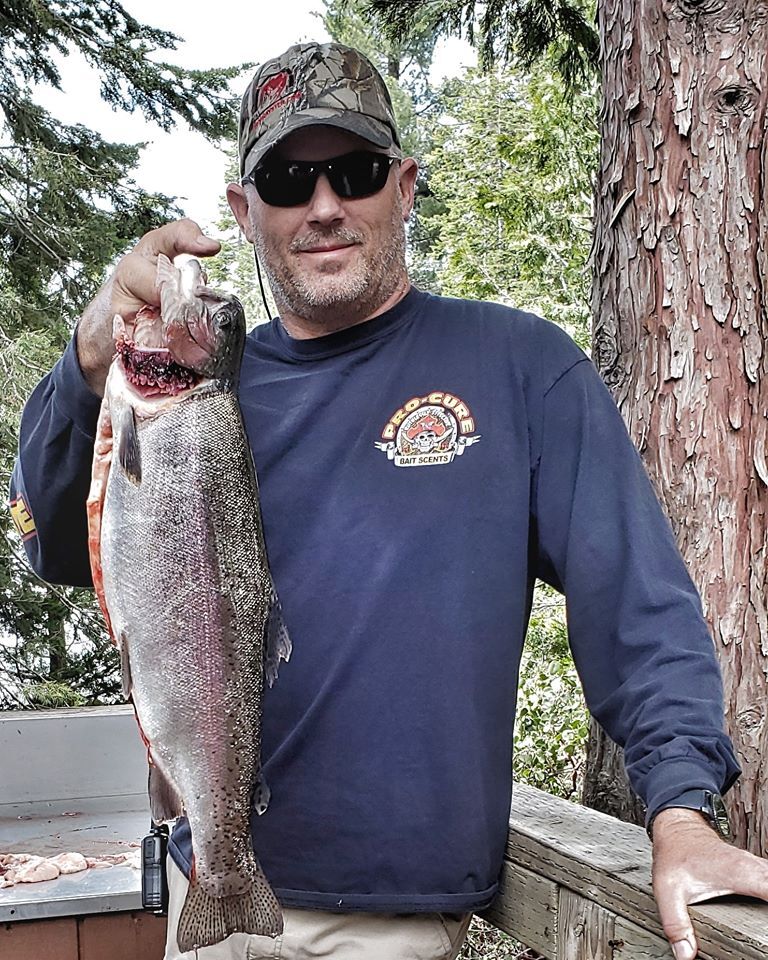 I have both fished both from shore and boat at Bear River, but I’ve experienced my best action while trolling from a boat. My most memorable trip to the reservoir was in May 2007 when Fred Solari of Lodi and I hooked and released 20 rainbows while trolling threaded nightcrawlers on lead core line along the face of the dam for a couple of hours in the late afternoon.

While most anglers use big minnow and trout imitation plugs on downriggers to target big mackinaw, Rich Spears, manager of the resort, also slow trolls with nightcrawlers behind big Ford Fenders on 17 colors of lead core line for his fish.

The best time to fish for the trophy macks is in the spring right after ice out or in the late fall just before the lake ices over, but huge macks are caught throughout the season.

Spears’ trolling technique definitely works. Spears caught a 25 lb. mackinaw in his boat before the lake opened in 2014. His next biggest was a 23.4 lb. mack that he landed in January 2012.

However, the biggest mack ever put in his boat was the 26.4 lb. monster that Aiden McKinney of Pioneer caught and released while trolling with Spears on September 13, 2012.

The lake also hosts a healthy brown trout population, a combination of wild fish and holdovers from CDFW plants.  Donna Schlageter set the lake German brown record of 15-1/2 pounds while trolling on June 30,1991.

CDFW, PG&E, and the Bear River Lake Resort all stock rainbow trout at Lower The sizes of fish stocked included fingerling, sub-catchable, catchable, and trophy-size fish. Fingerling and sub-catchable trout are stocked under a put and grow management strategy, while catchable and trophy-size trout are stocked under a put and take management strategy, according to Ben Ewing, District Fisheries Biologist for Alpine, Amador, Calaveras, and Lake Counties, in his report on the lake in May 2020.

“CDFW is implementing a put and grow strategy with the sub-catchable RT, but it is not known how many of these fish grow to catchable size. Losee and Phillips (2017) found that RT in the 14 – 15 in. length-class were, on average, 12.5 times more likely to be caught by sport anglers than those in the smallest individual length-class (8 – 9 inch,” he stated.

“Anglers may not be catching as many hatchery RT as they could due to the presence of large, predatory BN and LT in Lower Bear. CDFW is transitioning over to a trophy-trout fishery (1 lb. and larger stocked RT) in the coming years to help survivability of RT stocked in Lower Bear. The number of pounds stocked will likely stay the same,” he noted.

He said gathering information on the trophy-sized component of fish populations can be challenging due to their rarity and their use of habitats unsuitable to traditional sampling techniques (Bayley and Austen 2002).

“Lower Bear has a lot of boulder and bedrock structure with a steep gradient along its shoreline. This allows shore anglers access to deep water for fishing. Being able to fish this deeper water from shore means boat anglers are not the only ones able to fish greater depth,” he said.

“Only six BN have been reported caught in seven years of surveys. Prior to the 2019 stocking of BN, the most recent stocking of BN was 15,000 fingerlings in 2012. This 2012 stocking does not appear to be successful from the data collected. It is also possible that the smaller percentage of BN in Lower Bear are trophy-size and eating many of the RT resulting in fewer RT in the larger size classes. Wiley et al. (1993) noted that larger trout are better able to avoid predators. This same hypothesis could be also happening in Lower Bear.”

He made the following recommendations

The Bear River Resort is usually open from late April, depending upon snow and road conditions, through October 31. The lake freezes over for a couple of months during the winter and ice fishing is highly inadvisable because of hydroelectric power drawdowns during the winter. 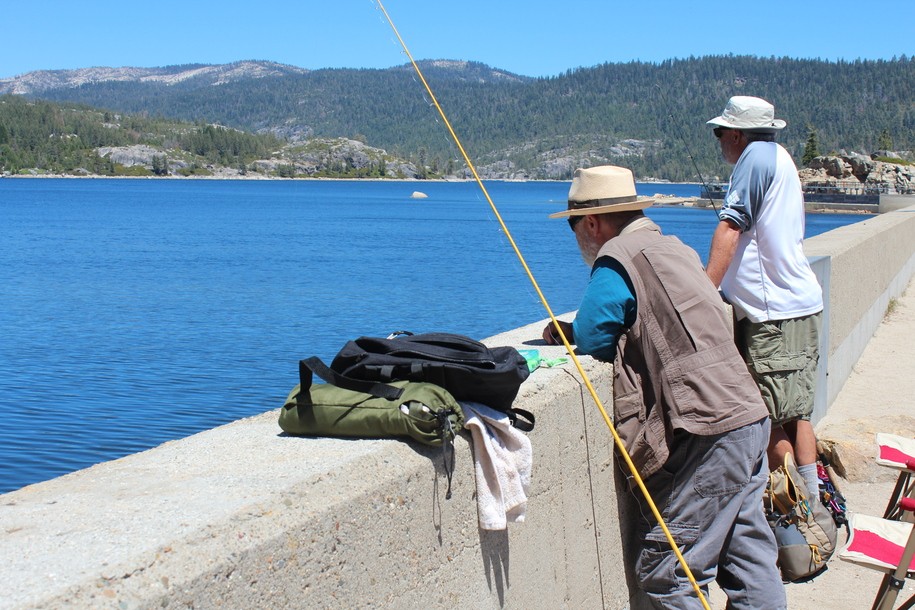 Size and Location: The 727 acre reservoir is located at an elevation of 5,850 feet in El Dorado National Forest 42 miles east of Jackson.

Camping: There are two nearby developed U.S. Forest Service campsites at South Shore Campground and Bear River Group Campgound. South Shore Campground has 22 units and is first come, first served; Bear River Group Campground has 3 sites that may accommodate 25-50 people. For reservations at the group campground call Sierra Recreation Managers at (209) 295-4512. Fees are charged at both campgrounds. There is piped water, picnic tables, toilets, grills, and fire-rings, but no hook-ups. Open May 15 – Oct. 15, depending on snow.

Cabin Rentals: Bear River Campground has seven lodging units, each having accommodations for four occupants. Each unit has a separate bedroom. All units have a day bed in the living room. Linens and blankets for four occupants are provided. All the units have full baths – towels are provided. Kitchens contain stoves, microwave ovens, refrigerators, cooking utensils and service setting for four.