‘Two roads diverged in a wood, and I took the one less traveled by, And that has made all the difference.’
Robert Frost – The Road Not Taken 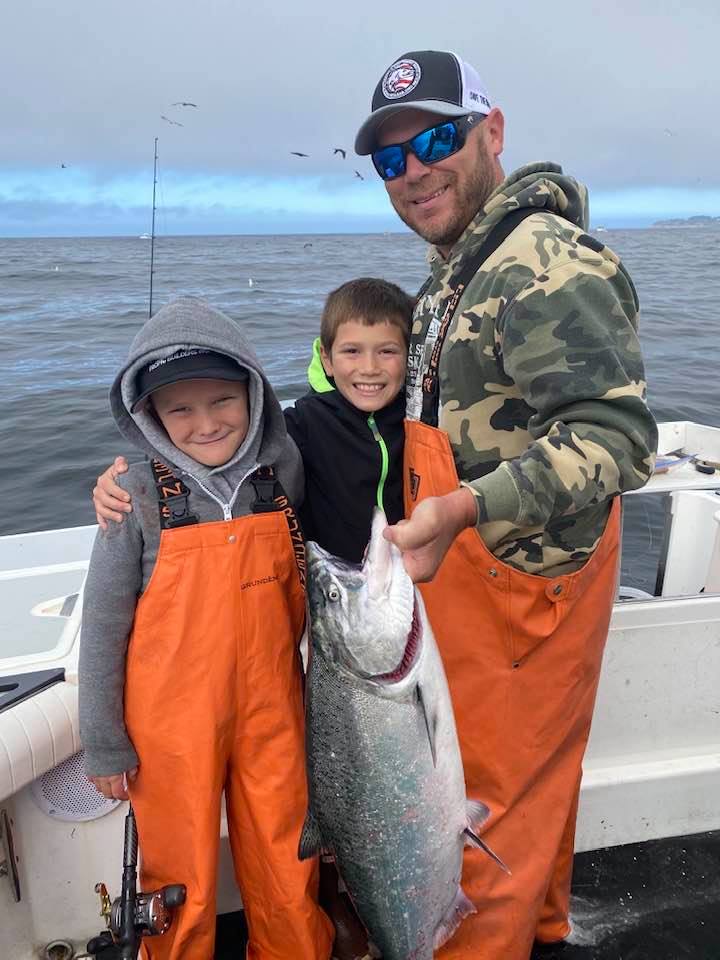 The summer of 2020 has been the summer of big ocean salmon leading Captain Rick Powers of Bodega Bay Sport Fishing to exclaim, “These are the largest salmon that we have seen in at least the past 10 years,” and Captain Trent Slate of Bite Me Charters out of Loch Lomond Marina to add, “There have been salmon over 40 pounds taken during the month of May, and I wouldn’t be surprised if a 50 pounder was landed this year.”
The remainder of the summer towards the end of the ocean salmon season is traditionally when the big fish arrive along the Marin coastline, and with the ‘lights out’ action currently north of Point Reyes, it is only a matter of time before the action busts wide open towards the entrance to the Golden Gate. Salmon are the most fickle of ocean species, and just because you found wide open action in one location means nothing for the following day, and the scores so far this season reflect the unpredictable nature of ocean salmon fishing.
Within the past few weeks, I have had the opportunity to head out twice with Captain Slate along the Marin coast, and the bonus has been the opportunity to drift for salmon. I love to drift, also known as mooching, for salmon because success or failure rests in your hands since it is easy to lose a bite by picking up your rod too quickly.
Similar to halibut fishing, you have to allow the salmon to load up on the rod by swallowing the bait, displaying patience before you start cranking on the reel. The added bonus of drifting is the engines are off, leaving quiet on the deck along with fighting the fish on light tackle without dropping a huge weight.
Our two roads emerged upon arrival at the Golden Gate since the majority of party boats were heading south for easy limits of a mixed grade of salmon off of Mussel Rock, but our choice was to head north for a consistently larger grade of salmon, although the numbers and action may not been as hot and heavy. Also on the boat on this day was Jesse Hall of Off-Duty Sport Fishing along with his 9-year old son, Kent, Justin Anderson and his 7-year old son Cole, Richard Noell of Placerville, and Paul Garloff of Petaluma.
After working through some slop outside of Point Bonita, the ocean decided to lie down north of Muir Beach, and we settled in for our first drift off of the Muir Woods cabins just south of Stinson Beach. One of the subtle things that you observe when you are out with a captain like Slate is that he is always paying attention to his surroundings, peering at other boats, watching the graph for bait, evaluating the color of the water, and seeing what the birds are doing. In addition, he has a network of other recreational party boats that are willing to assist each other. In order to get information, you have to give information.
We settled in on our first drift off of the cabins, and the ocean was absolutely alive. I was relaxing in the bow of the boat waiting for my rod to experience the little touches that come when you are mooching, and while I was sitting back, there were pelicans diving all around the boat within 10 feet of the bow along with two humpback whales putting on a show 50 yards away. This was as memorable to me as to what was to come later when I hooked up. 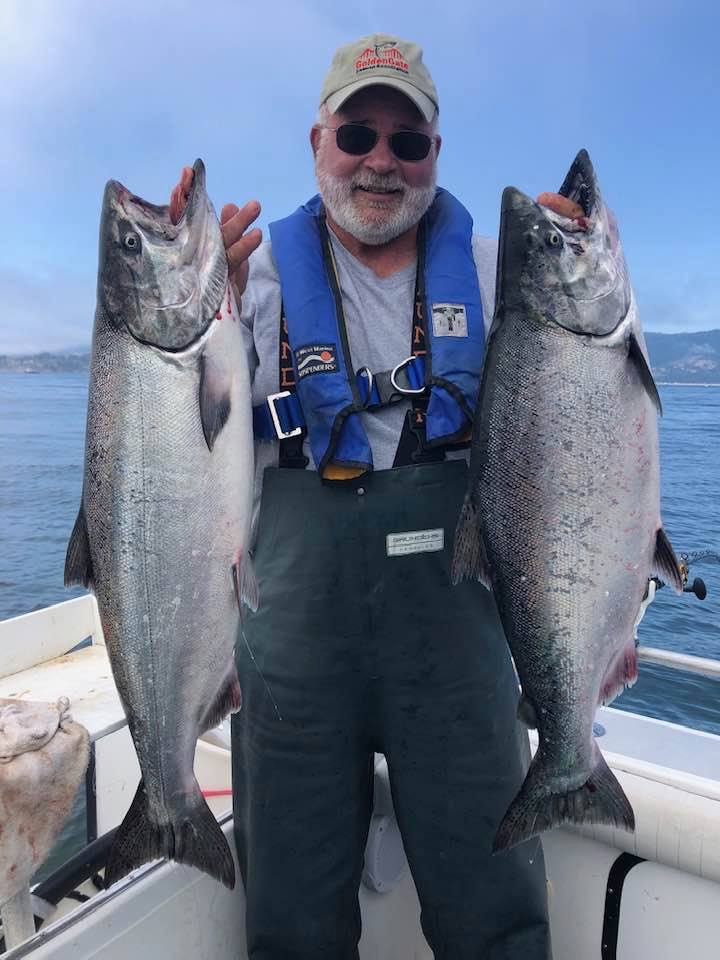 Similarly to two weeks prior, the action came in tiny spurts, and Jesse Hall got the party started with the first salmon of the day followed by Justin with a hog over 20 pounds that made him work a bit from his seat in the bow. The next drift brought out a triple with Richard and myself landing salmon in the 18 to 20-pound range while Kent and Jesse fought a bonus striped bass that came in at around 18 pounds.
I hooked up two more times later in the day, and the next fish made me work as it took off under the bow, requiring me to move my rapidly deteriorating frame around the anchor to the opposite site of the boat. When I arrived, Justin and I tangoed before I had to hand the rod off to Trent in order to follow the fish to the stern. Once Justin and I finished our dance recital, I recovered to take over the rod again, but this time, it was wrapped up with three other lines. The fish came in four times, and four times it defied the net before finally it rolled over on its side and basically said, “Take me, I’m tapping out. I gave it my best shot.”
That was typical for the day as 10 of the 12 salmon in the box by the end of the day ranged from 16 to 25 pounds. Kent and Jesse were able to reel in several salmon while Justin had the magic for the big fish. That’s the joy of fighting those big salmon – they run you around the boat, leaving you the feeling of being alive. The captain took the road not taken, and it made all of the difference.
Two trips with Slate, and it was my day on both occasions as I was able to contribute to boat limits with a total of 6 salmon from 18 to over 20 pounds, all taken within 20 feet of the surface on a herring or anchovy hanging from the end of a 4-foot leader with 3 ounces of weight or less on a sliding sinker rig.
Every salmon was a hatchery fish, and we have a great debt to the Golden State Salmon Association along with the Nor-Cal Guides and Sportsmen’s Association to be able to catch fish such as these beauties. If you haven’t mooched for salmon before, it is a very rare treat, and Slate is one of the only boats that offers this method of fishing.
Slate trolls early in the season, but when they start hooking up when the baits are hanging while slowing down while fighting a fish on the troll – he knows it is time to drift. Slate operates Bite Me Charters out of the Loch Lomond Marina – (415) 307-8582.