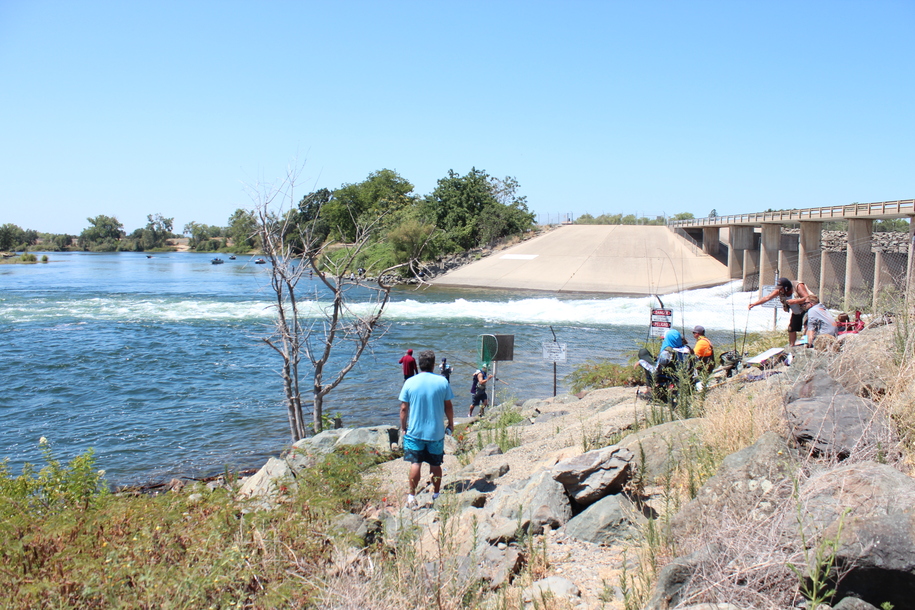 OROVILLE – The salmon season kicked off with a promising start on the Feather River below the Thermalito Afterbay Outlet on July 16, although fishing has slowed down since then. Around 150 anglers showed up for the salmon opener at this popular spot.

The outlet hole has been legendary for years. When outdoor writer Don Vachini and I entered the hole in September 1996 in a boat with the late fishing guide Jim Zanocco, he smiled broadly and proclaimed, “Welcome to the Gates of Hell.”

The outlet hole was once known for abundant salmon and the fights and shouting among anglers in the crowded conditions – and the persistent snagging of salmon that went on.

While large numbers of shore anglers and boaters still congregate at the outlet, the scene has changed a lot in recent years. After the river shut down to fishing for two years in 2008 and 2009 and fully reopened in 2011, I have noticed a more cordial, less stressful and more family friendly fishing scene below the afterbay when I’ve gone there.

On this year’s opener, Richard Leonard of Napa and Eric Clayton of American Canyon caught two bright Chinooks weighing 16 and 10 pounds, as well as losing three fish, while fishing with Rob Reimers of Rustic Rob’s Guide Service on the opener below the outlet. The fish bit early; they hooked their last fish just after sunrise. 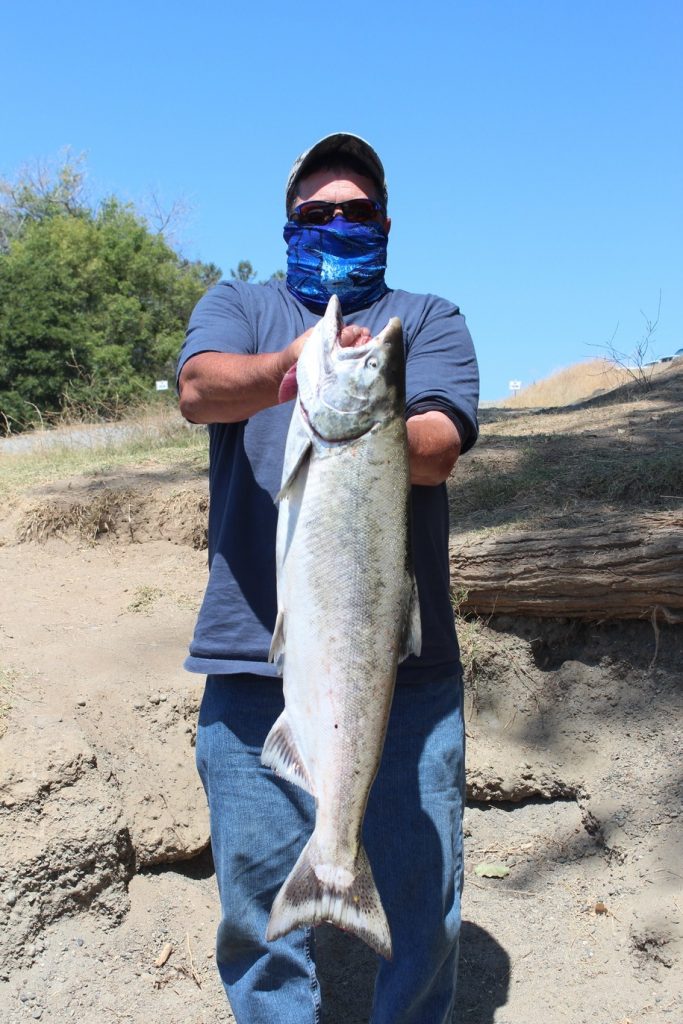 “We caught both fish on the Rob’s Dragon Glow K-16 Brad’s Killer Fish,” said Reimers. “We saw anglers in one boat near us hook four, landing three salmon, while fishermen in another boat got two fish in.”

“I would rate it as a very good opener,” said Reimers. “I didn’t get to fish the spot I wanted to fish and we still hooked five kings Judging by opening day, fishing should improve when more fish move in after the next full moon.”

Fishing for shore anglers on the salmon opener this year was slow, no fish yet reported taken by bank anglers on opening day. Shore anglers find the best action while tossing out Mepps Flying C and Blue Fox spinners, casting spoons and drifting salmon roe.

On rest of the river from Gridley to Verona, fishing was very tough for shore anglers and boaters, with few fish reported.

Since the opener, fishing at the afterbay has slowed down as it normally does. Dale Wilder of Yuba City caught two kings weighing 10 and 12 pounds while fishing with Reimers Friday. However, fishing was very slow for all of the boats on Saturday, Sunday and Monday.

The National Marine Fisheries Service’s 2020 ocean abundance projection for Sacramento River fall Chinook salmon is 473,200 adult fish, so fishing should turn on as increasing numbers of fall-run Chinooks enter the river in coming weeks. Ocean trollers have been hooking good numbers of salmon outside of the Golden Gate, including limits many days.

In banner years, salmon fishing can be very good in the Feather below the outlet down to Boyd’s Pump. On one trip I made with Robert Weese of Northern California Guide Service, after the five of us on the morning trip caught their limits early, Weese went out for an afternoon adventure that also produced limits of kings.

Last year, the California Fish and Game Commission extended fishing in the Feather River an additional two weeks, closing on October 31. The Commission made another change that benefits anglers – they increased the daily bag limit to three fish and the possession limit to six fish.

The Feather River contributes significantly every year to the number of salmon that return to the Sacramento River Basin. In 2019 the Feather River Basin, including the Yuba River, supplied 40 percent – 82,461 -of the total fall run chinooks returning to the Sacramento River, including 56,358 natural area fish and 27,103 hatchery fish. The 82,461 included 65,742 adults and 16,719 jacks (two-year olds).

According to data collected by the California Department of Fish and Wildlife (CDFW), approximately 272,000 salmon were harvested in the commercial fishery along with a catch of nearly 88,500 in the recreational ocean fishery. The Feather contributed 32 percent of the recreational ocean salmon fishery and 24 percent of the ocean commercial fishery in 2019.

“My understanding of Feather fall run chinooks these days is that we’ve lost the natural spawning population below the outlet – with the water being too warm to be hospitable for fish,” said John McManus, President of the Golden State Salmon Association (GSSA). “This is a problem that GSSA is working with the state and others to fix.” 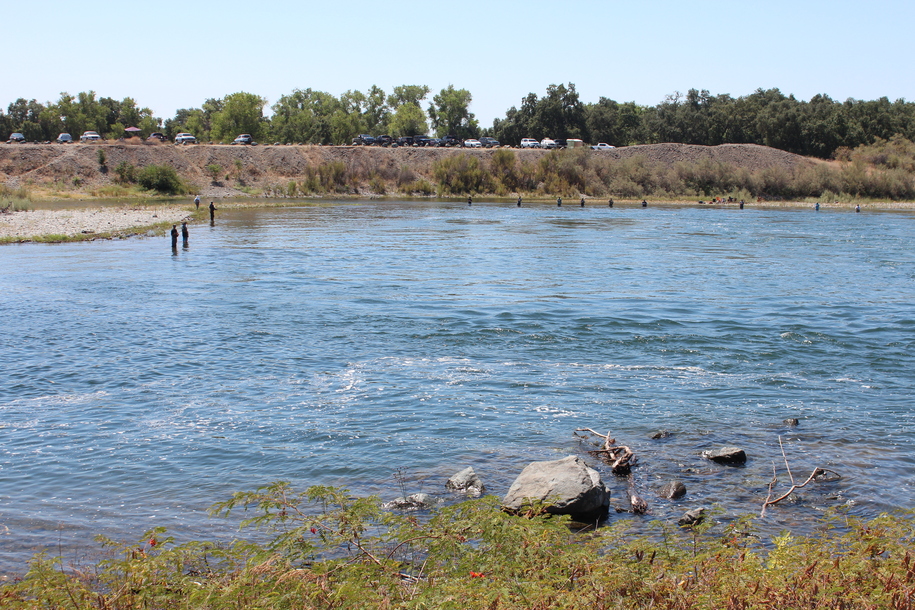 The riffle across from the afterbay is a popular spot for waders to target salmon and steelhead during the season. Photo courtesy by  DAN BACHER, Fish Sniffer Staff.

In addition to salmon, the Feather also has a solid steelhead population. The steelhead average 2 to 5 pounds, but bigger fish are taken every year. While steelhead fishing one fall, I saw another angler bag a 12-pouond steelhead. The largest steelhead ever reported at the hatchery weighed 20 pounds.

The hatchery trapped a total of 1962 adult steelhead this season. The total eggs they collected were 1 million, more than enough to meet their production of 450,000 steelhead smolts for the Feather River.

This year the hatchery stocked 487,800 steelhead smolts at Boyd’s Pump below Yuba City and 41,550 smolts in the afterbay to sustain the landlocked steelhead program that provides a unique fishing opportunity in the fall, winter and spring for shore and bank anglers.

Unfortunately, the juvenile steelhead spawned this year are being treated by UC Davis for a fish disease, noted Crawshaw.

But salmon and steelhead are not the only fish found in the Feather. The river also hosts annual migratory runs of striped bass and American shad, as well as smallmouth bass, spotted bass, channel catfish, and in high water years, white sturgeon.

In high water years, the Feather draws many stripers that would normally spawn in the Sacramento. Boaters catch the striped bass while trolling with plugs, tipped with plastic worms, drifting jumbo minnows and bait fishing with cut sardines, anchovies and threadfin shad, along with threaded pileworms and bloodworms.

However, the biggest news on the river this year was the 24.5-pound rainbow trout that Joshua Giordano landed in the Thermalito Diversion Pool, the stretch of river below Oroville Dam and above the hatchery diversion weir, on May 22.   “The trout was 35 inches in length by 25 inches in girth, a truly amazing fish,” said Giordano, who caught the rainbow on a swimbait under a bobber. 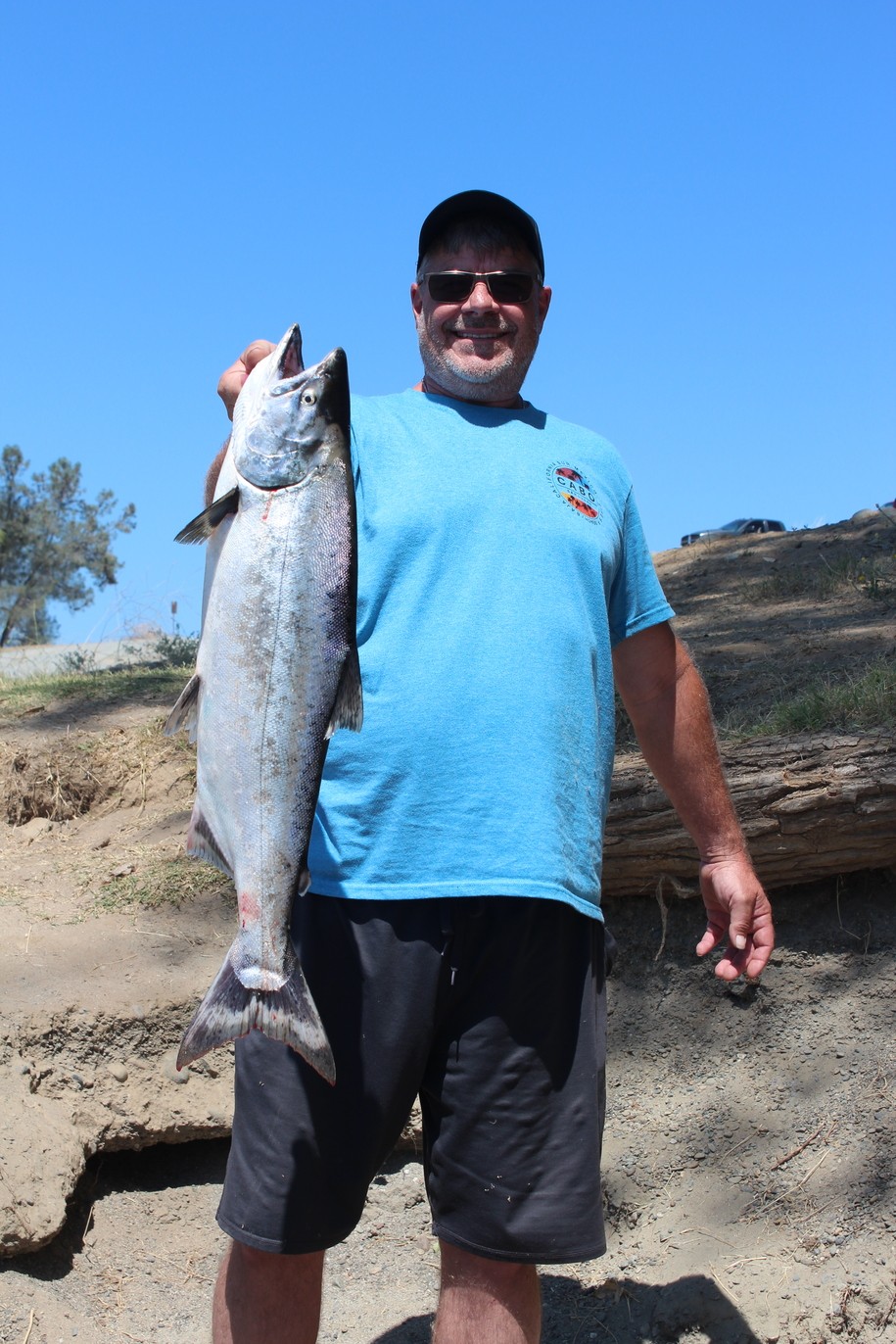 Location: The lower Feather River, the principal tributary of the Sacramento River, runs from below Oroville Dam to its junction with the Feather River at Verona. The river’s main stem is about 71 miles long. This river from Yuba City/Marysville to Verona is characterized by riffles, sandbars, long flats and some deep holes.