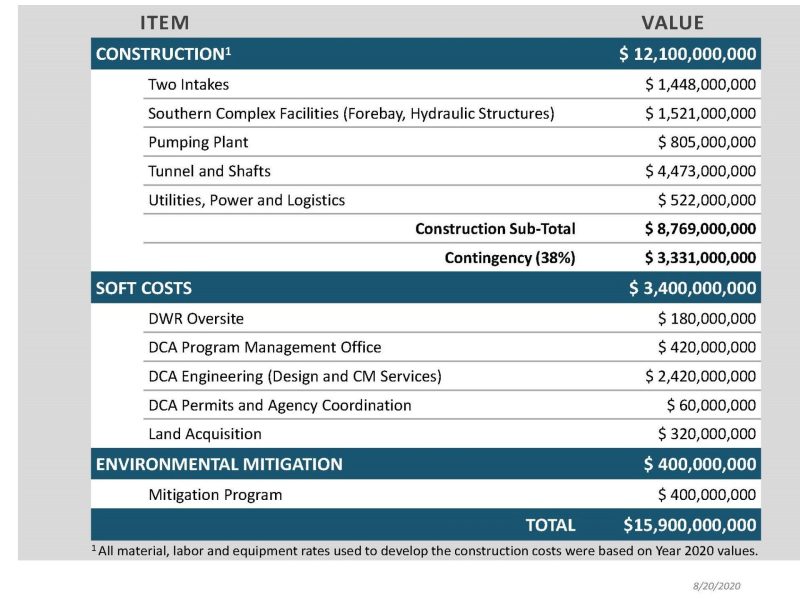 As hundreds of wildfires raged throughout California, a report released at the Delta Conveyance Design and Construction Authority (DCA) on-line meeting on August 20 revealed that the cost estimate for Gavin Newsom’s Delta Tunnel is up to $15.9 billion.

The estimate is based on a single tunnel with a total capacity of 6,000 cfs. with two intakes of 3,000 cfs. The project would feature 42 miles of tunnels and associated shafts, Southern Complex Facilities with a Pump Station and Forebay, and connections to the existing California Aqueduct of the State Water Project (SWP).

If built, critics say the actual tunnel costs would undoubtedly exceed the original estimates at the same time that the project hastens the extinction of winter and spring run Chinook salmon, Central Valley steelhead, Delta and longfin smelt and other state and federal listed fish species. The enormously expensive project would also imperil the salmon and steelhead populations on the Trinity and Klamath rivers that the Yurok, Karuk and Hoopa Valley tribes have been fishing for since time immemorial.

In case you’re wondering, that 38% “contingency” is “part of the construction cost,” according to the report. “It represents a best guess of the unknown items where experience indicates, will likely result in additional cost.”

The cost for “Environmental Mitigation” of the environmentally destructive public works project would be $400,000,000.

In a thread of tweets, Barbara Barrigan-Parrilla, Executive Director of Restore the Delta, responded to the updated cost estimate by the DCA, pointing out that the actual cost of the project would likely to be much higher than the new estimate.

“The single tunnel is now up to $15.9 billion. There is a 10% chance according to the @dcdcainfo’s director the project could go up to $25 billion. She worries we will take it out of context,” wrote Barrigan-Parrilla.

“We don’t have to take costs out of context,” she explained. “The average California project comes in at 6 times projected costs. But figuring they have a smart team, and there are no overruns, there is 5% annual inflation, which gets the project to over $25 billion.”

She also criticized the low cost estimate for the mitigation for the environmentally destructive public works project.

“Last, and worst, there is only $400 million for Delta tunnel mitigation,” she wrote. “That cannot repair habitat, lost farmland, lost business, or Stockton’s drinking water system.  It will not mitigate harmful algae blooms (HABs). It will not mitigate air pollution impacts.”

She concluded, “It will not mitigate the damage done to environmental justice communities up and down the state, and in the Delta, not served by the State Water Project. $400 million will not provide mitigation to EJ communities rural and urban in the Delta.”

Tim Stroshane, also with Restore the Delta, quipped about the “tunnel vision” of the Delta Tunnel: “It’s nearly as expensive as the two tunnel version canceled last year. One for the price of two—what a deal!”

Regina Chichizola, co-director of Save California Salmon, criticized the Newsom Administration for continuing to go forward with the Delta Tunnel in the midst of the global coronavirus pandemic.

“That Gavin Newsom and California Natural Resources Secretary Wade Crowfoot are working with Trump to push this through during a pandemic, while many of the people that will be impacted can’t engage, shows disrespect for Native Americans and other rural and salmon dependent communities,” emphasized Chichizola.

The Delta Tunnel is a key part of Newsom’s larger “water vision” for California. On July 28, Newsom unveiled a final version of his controversial Water Resilience Portfolio, a water plan that that includes the Delta Tunnel, Sites Reservoir and the agribusiness-promoted “voluntary agreements,” all designed to benefit San Joaquin Valley corporate agribusiness interests.

“Governor Newsom is continuing to sell out our rivers and salmon to benefit water brokers and large agricultural corporations,” said Chichizola. “These are the same corporations that are polluting our rivers and drinking water, then exporting their products.”

Newsom received a total of $755,198 in donations from agribusiness in the 2018 election cycie, based on data from www.followthemoney.org. That figure includes $116,800 from Beverly Hills agribusiness tycoons Stewart and Lynda Resnick, the largest orchard fruit growers in the world and the sponsors of the Coalition for a Sustainable Delta, a corporate agribusiness Astroturf group.

By fast-tracking the Delta Tunnel plan, promoting the voluntary water agreements, overseeing the issuing of a new draft EIR that increases water exports for the state and federal projects rather than reducing them, and backing Sites Reservoir, could Newsom be bending to the wishes of his agribusiness donors?

Here is an analysis of the cost estimate from Barbara Barrigan-Parrilla, Executive Director of Restore the Delta, published on Sunday, August 23:

At the August 20, 2020 Delta Conveyance Design and Construction Authority meeting, it was revealed that the proposed Delta tunnel would cost $15.9 billion for construction and that $400 million would be budgeted to mitigate impacts resulting from construction.

Discussion of immediate planning expenses and tunnel costs occurred after comments from Restore the Delta and Local Agencies of the North Delta (LAND) insisting on transparency. We collectively wanted to know about the costs of the project and Delta tunnel planning paid for in advance by the Department of Water Resources and indicated that these items had to be made understandable to the public.

For comparison, let’s remember that Governor Brown’s California WaterFix (the two tunnel project) was budgeted at $17 billion for two tunnels that could export 9000 cubic-feet-per-second (cfs) of water.

The new single tunnel is budgeted at $15.9 billion for 30 percent less water delivery capacity. While we believe that this assessment of construction costs for the single tunnel is more accurate, it also reveals a diminishing return in water supply for the cost of the project.

Metropolitan Water District of Southern California stated in 2018 that inflation for construction costs would be 5 percent annually. Generally, bond debt doubles the price of a project. The tunnel will cost in total $30-$40 billion, without cost overruns. The Department of Water Resources notified the public Friday afternoon that the joint EIR/EIS would be available summer of 2022. At 5% inflation over two years, the tunnel by that time will cost $17.4 billion dollars, more than the original twin tunnel project.

Locally, tunnel construction will devastate our Delta farm economies and result in significant water and air pollution for our already stressed urban areas. Our assessment of what true mitigation would cost is in the billions. $400 million will not mitigate the damage done to Stockton’s drinking water quality and surrounding waterways, the air pollution impacts, let alone the damage done to North Delta legacy farming towns and farming throughout the Delta and loss of irrigation water.

Governor Newsom needs to understand that the project has not gotten any better. All plans for meaningful improvements to the Delta are being ignored by the Department of Water Resources. A tunnel is more costly than ever; and it will not make more water for the state.

With cash-strapped public agencies, an economic collapse, costly wildfires, and a pandemic still not under control, the Delta tunnel makes less sense than ever.