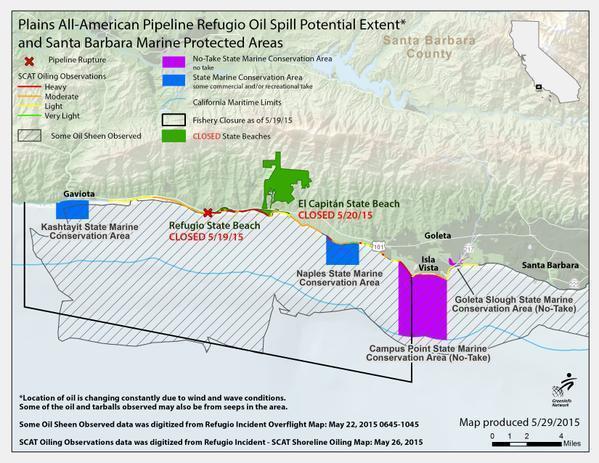 May 19 of this year marked the fifth anniversary of the massive Plains All American Pipeline spill near Refugio State Beach in Santa Barbara County that resulted in the idling of Exxon’s three offshore oil platforms that rise like sentinels from the coastal waters.

The collapse of the severely corroded pipeline resulted in 140,000 gallons of crude oil spilling into the ocean, killing hundreds of birds and marine mammals, halting recreational and commercial fishing and fouling four “marine protected areas” created under the privately-funded Marine Life Protection Act (MLPA) Initiative as the spill was cleaned up.

Exxon’s offshore rigs have remained idle since the Refugio Oil Spill, but the oil giant, responsible for the infamous Exxon Valdez disaster off Alaska in 1989, had plans to restart its offshore drilling platforms in Santa Barbara County and truck that oil through California.

However, opponents of offshore drilling say two unrelated developments that took place on August 12 could undermine these plans. A coalition of conservation, environmental justice and indigenous groups is calling on the oil company to abandon this project and decommission its offshore rigs.

First, Santa Barbara County planning staff released a report opposing the use of State Route 166 to truck oil to Kern County, noting that use of this route would “increase the likelihood of accidents and oil spills,” according to a press release from the coalition.

The SEIR identified the “No Trucking During Rainy Periods Alternative” as the “next most environmentally preferred alternative.”

Second, Phillips 66 announced that it will close its Santa Maria refining facility in Arroyo Grande and associated crude oil pipelines by 2023, shutting down the other option for ExxonMobil to get its offshore oil to a refinery.

Linda Krop, chief counsel for the Environmental Defense Center that represents Get Oil Out! and Santa Barbara County Action Network, called on ExxonMobil to withdraw what she called “its risky oil project.”

“ExxonMobil’s proposal was already ill-conceived from an environmental and climate justice point of view, and now it is unsuitable in light of Phillips’ plans to convert its refinery to renewable fuels,” said Krop. “There is even less reason now for ExxonMobil to put our coast and communities at risk.”

She said Exxon’s trucking plan called for up to 70 oil tanker trucks per day on coastal Highway 101 and Route 166, “24 hours a day, seven days a week.”

The Santa Barbara County Planning Commission hearings scheduled for September 2 and 9 were cancelled due to Phillips’ announcement that the company will shut down its refinery in Nipomo and convert its refinery in the Bay Area to renewable fuel stock by Jan 2023.

“ExxonMobil’s oil was to feed into the Phillips system, so they need to regroup and decide what to do, said Krop. “We are waiting to learn whether ExxonMobil will attempt to truck its oil to a different destination, e.g., Kern or LA Counties.”

After its platforms were shut down in 2015, the company proposed to restart its platforms, load its offshore oil onto tanker trucks at its Las Flores Canyon processing facility, and truck up to 470,400 gallons of oil per day to facilities in Kern County and Santa Maria, said Monsell.

“California suffers hundreds of oil-truck incidents a year, and many result in oil spills. There were 216 trucking accidents along ExxonMobil’s proposed route from 2015 to 2020, California Highway Patrol data show, resulting in nine deaths and 92 injuries. A tanker truck crashed off Highway 166 on March 21, spilling more than 4,500 gallons of oil into the Cuyama River above Twitchell Reservoir,” she stated.

Exploitation of oil has brought devastation to the Chumash

Representatives of other groups that are part of the coalition also expressed their opposition to the plan.

“The exploitation of oil in the Chumash homelands has brought untold economic, environmental, and social devastation to our peoples for well over a century,” said Alicia Cordero, First Nations program officer for Wishtoyo Chumash Foundation. “We are heartened to finally see communities all throughout Santa Barbara County standing with us against these injustices while facing down the last gasps of the dying local oil industry.”

“Exxon’s oil trucking plan was already extremely controversial, with cities of San Luis Obispo, Goleta, Santa Barbara and Carpinteria all passing resolutions calling for denial of the project,” said Katie Davis, chair of the Sierra Club Los Padres Chapter. “Given the pending closure of the Santa Maria pump station and even longer and more dangerous route, it’s time to take trucking oil off the table entirely.”

“As UCSB students, we are glad to see our region move one step further from fossil fuel infrastructure that endangers all of our communities. We are happy to see that Phillips 66 recognizes that there is no future for drilling on the Central Coast, and hope that Exxon will quickly recognize the futility of its oil trucking proposal. It’s time to transition away from fossil fuels and toward a just, sustainable, and equitable future.”

In May, the Center for Biological Diversity said the idling of the seven offshore platforms served by the pipeline has prevented “massive emissions of climate pollution” since the spill.

“If the seven offshore drilling platforms served by the pipeline had not gone idle, they would have added 33.9 million metric tons of carbon dioxide pollution to the atmosphere. That’s roughly equivalent to operating two coal-fired power plants in California over the same period — or to burning more than 37 billion tons of coal,” the group stated.

In April of 2019, a Santa Barbara jury found Plains All America criminally liable for the failure of its severely corroded pipeline and delays in reporting the oil spill and a judge issued a $3,347,650 fine.

On March 13 of this year, Federal officials also announced a civil settlement with Plains All American  arising out of Plains’ violations of the federal pipeline safety laws and liability for the discharge of approximately 2,934 barrels of crude oil from Plains’ Line 901 in the Refugio Oil Spill. The settlement with the U.S. Department of Justice requires the company to modify its natural operations to implement safeguards resulting from the spill and requires Plains to pay over $60 million in penalties, clean-up costs and natural assessment costs and damages.

Missing from the news coverage of the oil spill, the trial and sentencing and now the plans by the oil industry to restart three offshore platforms and build a new pipeline is one of the biggest and most ironic stories regarding the Refugio Oil Spill.

In a classic example of the deep regulatory capture that pervades what passes for “marine protection” in California, the head of the oil industry trade association that lobbies for the Plains All American Pipeline corporation happens to be the very same “marine guardian” who chaired the panel that created the so-called “marine protected areas” that were fouled by the spill.

She also served on the task forces for the Central Coast, North Central Coast, and North Coast from 2004 to 2012, as well as on a federal marine protected areas panel from 2003 to 2014. She served on these panels as the oil industry was fracking off the Southern California Coast.

Yet not one government official, NGO representative or reporter (except this one) mentioned that the head oil industry lobbyist promoting the expansion of offshore drilling and opposing legislation increasing protection of the California coast was the same state official who headed the panel to create questionable Southern California “marine protected areas” that don’t protect the ocean from fracking, offshore drilling, pollution, seismic testing and human impacts on the ocean other than sustainable fishing and gathering.

Big Oil is the biggest and most powerful corporate lobby in Sacramento — and the Western States Petroleum Association (WSPA) is the biggest and most powerful lobbying organization. Big Oil, along with corporate agribusiness, developers, big water agencies, timber companies, and other Big Money interests, has captured the regulatory apparatus in California.

From January 1 to March 31, 2020, the same time that the Newsom Administration approved 1,623 new onshore oil drilling permits, according to Department of Conservation data analyzed by Consumer Watchdog and the Fractracker Alliance, WSPA spent $1,089,702 lobbying state officials.

Chevron spent even more: $1,638,497 in the first quarter of 2020 to influence legislators, the Governor’s Office and other state officials. The two oil industry giants combined to spend a total of $2,728,199 lobbying from January 1 to March 31.

Other big spenders on lobbying in the first quarter of 2020 include Aera Energy, formed in June 1997 and jointly owned by affiliates of Shell and ExxonMobil, with $290,826, and the California Resources Corporation, formerly Occidental Petroleum, with $213,489.

Big Oil’s tentacles extend far and wide in California politics. Lobbying is just one of the methods that Big Oil uses in California to exercise inordinate influence over California regulators. WSPA and Big Oil wield their power in 6 major ways: through (1) lobbying; (2) campaign spending; (3) serving on and putting shills on regulatory panels; (4) creating Astroturf groups: (5) working in collaboration with media; and (6) contributing to non profit organizations.