The Chinook salmon fishing on the Sacramento River in the Capital City area from Verona below the mouth of the Feather River to Freeport has begun to improve as fish move into the area on their upstream spawning migration.
Although fishing has picked up, most anglers and guides are saying the fishing isn’t as good as it would normally be this time of year.

Mark Morrison of Mark Morrison’s Guide Service reported on Sunday, September 20, “Two of us managed to get 2 bright kings in the boat today on the Sacramento below Verona while trolling with Silvertron lures.,” he said. “We didn’t catch our first fish until 1;30 p.m.” 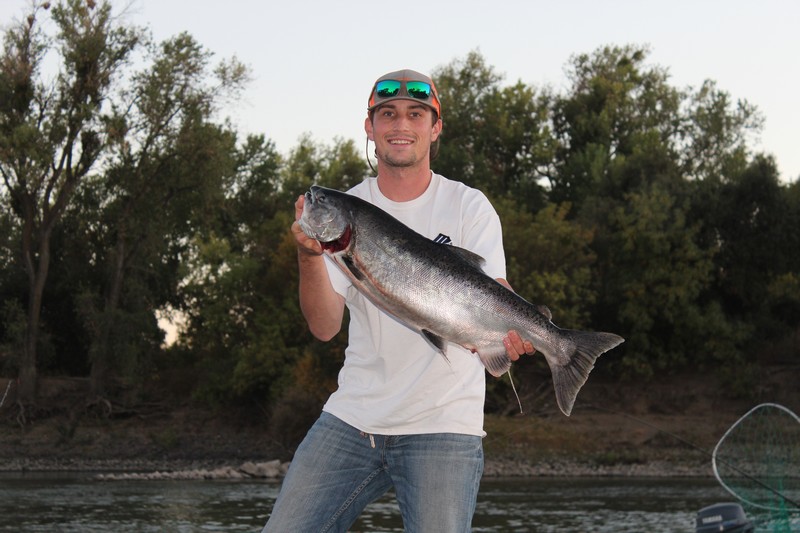 Adam Wills caught a bright king while anchored up with Silvertron spinners on the Sacramento below the Verona Marina on September 24.  Photo by DAN BACHER, Fish Sniffer Staff.

Mark and I had a trip scheduled for Thursday, September 20, so we decided to give it a try that afternoon. Fishing with us with Rod Brown, the manufacturer of Silvertron lures.

During the trip, we experienced beautiful early fall weather, with temperatures in the eighties. We made four trolls down the river from Verona to near the Sacramento International Airport. We bounced Silvertron lures along the bottom the entire time. However, we didn’t see any of the several boats in that stretch of river catch any fish and we didn’t have any strikes on our rods.

Finally, around 6:30 pm, we decided to pull in our rods for the evening. As we went back towards the boat ramp, we checked anglers that were fishing in the “armada” of boats anchor fishing for salmon below the Verona Marina.
It turned out that Adam Wills had caught a bright king about 15 pounds while anchored up with Silvertron spinners. I took some photos of Wills and his partner, Brandon Ellis, with the one salmon we had seen on the trip.

While fishing was slow, Morrison, Brown and I had a great time enjoying the outdoors and we had some fantastic conversations. While we were fishing, Brown assembled several custom spinners right on the spot. “These are all handmade in Sacramento by my myself and a couple of others,” he noted.

Mark is the son of fishing guide John Morrison, who passed away in August. Mark and I swapped stories about his father, a legendary and irascible fisherman who I had a great time fishing with for salmon, shad and smallmouth bass on the Feather River many times.

Depending on the time of year, Mark, who learned to fish from his father, is available for smallmouth bass, striped bass, shad and salmon trips on the Feather River in the Marysville area, as well as for stripers, shad and salmon on the Sacramento River. 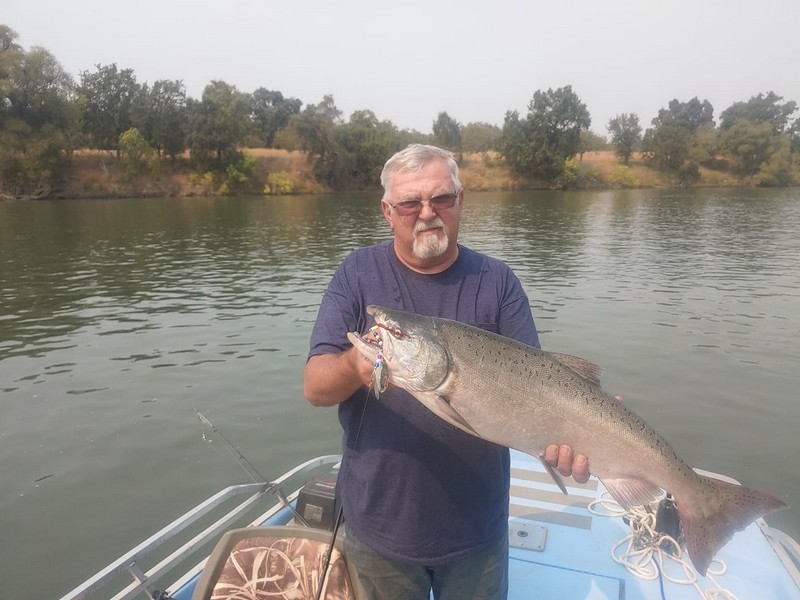 Mark Morrison shows off a big, bold chinook salmon that he caught on the Sacramento River below Verona on September 20. Photo courtesy of MARK MORRISON’S GUIDE SERVICE.

Boat fishermen are using Flatfish and other plugs to hook salmon at Miller Park, the Water Tower, Garcia Bend and Freeport. Salcido reported catching an 11 lb. salmon while fishing with a Flatfish with sardine wrapper while anchored at the color line at the mouth of the American River on his latest trip.

“We’re putting anywhere from 1 to 3 fish in the boat in each day while fishing for salmon in the Sacramento metropolitan area,” said Chris Ditter of Headrush Sportfishing. “We’re trolling with Brad’s Killer Fish in Rob’s Dragon Glow, K-14 Kwikfish and Silvertron spinners. Our two biggest salmon caught this week weighed 28 and 22 pounds.”

Jimmy Downs caught a 20 lb. salmon while fishing a Brad’s Cut Plug in Rob’s Dragon Glow with Rob Reimers of Rustic Rob’s Guide Service in the metropolitan area Friday. “We had one other fish on and another takedown also,” said Reimers.

The best salmon fishing is definitely available in the cooler water upriver from the Barge Hole to below Red Bluff.

The National Marine Fisheries Service earlier this year forecasted an ocean abundance of 473,200 Sacramento Valley adult king salmon and a river spawning escapement of 270,000 in 2020. Whether the return to the Sacramento River and its tributaries will be near the scientists’ estimate is anybody’s guess.

John McManus, President of the Golden State Salmon Association, commented in the organization’s newsletter on the relatively low numbers of salmon that have arrived in the Sacramento River and its tributaries to date:

“This year’s fishing season was set with an expectation that after fishing there would still be over 200,000 spawning salmon in the Sacramento Basin. Ask any river guide and you’ll hear they have not seen such a return this year. What gives? We don’t know for sure but here are a few things to consider. Commercial trollers reported there were still large spawning salmon to be found in very deep ocean waters as of mid-September.

Add to that the possible loss of the early part of the fall run in the upper Sacramento due to hot water coming out of Shasta in late October and early November (killing eggs laid prior) and the drastic reduction of those Shasta releases at the same time in most years that dewaters and kills salmon nests. 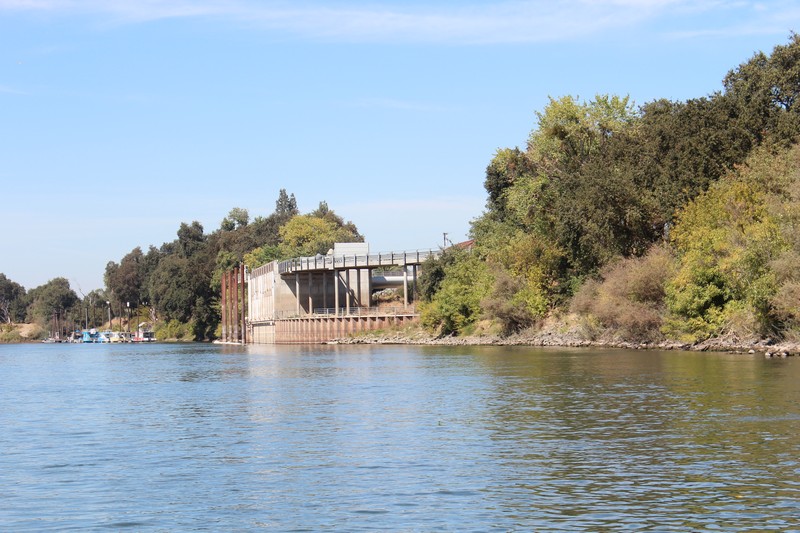 The stretch of the Sacramento River from Verona to the Elkhorn Bridge is a lot quieter section of river to fish than the section that the that runs through downtown Sacramento. Photo by DAN BACHER, Fish Sniffer Staff.

Fall run salmon that arrive in the upper Sacramento after Thanksgiving find much better conditions and successfully spawn. If we’ve lost the early part of the run then it stands to reason that the survivors will stay out in the ocean longer and not arrive in the rivers until later. In recent years we’ve seen fall run adults returning to spawn as late as January.

If the above is more true than not, improvements to hatchery release practices are making an improvement to the ocean fishery but may not provide many additional fish to the Feather River or upper Sacramento River fisheries.

The Coleman hatchery in the upper Sacramento produces over 12 million baby salmon annually. In the hatchery, these fish are shielded from redd dewatering and hot water issues. Once released into the river, they only survive in years when there’s enough water, after spring time diversions, to survive the trip down to the sea. The same is true for the natural spawned, or “wild” fish from rivers throughout the Sacramento Valley.

In many years, after springtime diversions, there just isn’t enough water to safely pass the majority of these fish to the ocean which might be why we aren’t seeing more fish returning to various parts of the Sacramento Basin. Recent studies demonstrate that up to the 43 percent of hatchery fish, including those from the Feather River and Nimbus hatcheries, released into the bay near Vallejo, die before getting to the Golden Gate Bridge. This seems like a strong reason to move their release site closer to the Golden Gate Bridge, something GSSA is advocating for in our Salmon Rebuilding Plan.”

Salmon Fishing Regulations: The salmon fishing season is set at the California Fish and Game Commission meeting every April after the Pacific Fishery Management Council adopts the ocean salmon fishing regulations. The salmon season in 2020 runs from July 16 to December 16 in the Sacramento region. The daily bag limit is one salmon and the total possession limit is two fish this season. Review the California Fresh Water Sport Fishing Regulations Booklet and Supplement for more information.

Boat launching: Concrete boat ramps are available at Discovery Park and Howe Avenue in the American River Parkway and at the Broderick Boat Tramp, Miller Park Regional Park and Garcia Bend on the Sacramento River.